It is great being back on a cruise ship…well, in this case, yacht!  Windstar’s Star Breeze with only 312 guests after her stretch and refit is truly more akin to a new yacht build rather than a refit. But let’s not get ahead of ourselves.

I did not expect it, but this is a homecoming of sorts as so many former Seabourn executives are now Windstar executives. What does that mean? It means…and this is very important…these truly passionate and dedicated people have the freedom to create and deliver the luxury product they have always wanted to. More than seeing this passion, you feel it, along with their pride in what they have created. It is just infectious. So it does, alas, feel like HOME.

Full disclosure: I am a guest of Windstar on this sailing. I am, actually, the only travel agent onboard!  There is a contingent of media folks and another small group of paying guests, but there are only a total of 90 people onboard, out of a maximum of 312.  Well, I guess I am both a travel agent and media…and an old friend.

Post-Covid pandemic (it really isn’t totally over, but you know what I mean) travel is really quite simple and, well, normal…with a couple of new steps, at least for now.  St. Maarten requires that you have a 72 hour (120 hour for US citizens) negative PCR test and confirm that you have insurance in case you do contract Covid-19 while on the island.  Living in the mountains I drove to a Walgreen’s pharmacy in Reno for a drive-though PCR test at 9:30 AM. I then headed to the office and my negative result was in my Inbox before I got there; less than an hour. I then completed the no-cost Maarten EHAS pre-approval application. By 3:00 PM I had my pre-approval.

My flights on American Airlines were fine (no food or alcohol served) and I spent 2 of my 3.5 hour layover in Charlotte, North Carolina for a lie down at Minute Suites. (I am entitled to one complimentary hour from my American Express Platinum Card).  Upon arrival in St. Maarten I thought the immigration line was going to be a long arduous experience, but I was wrong. It was, well and truly, one of the most efficient and friendly non-ordeals. The long line moved fast with all EHAS paperwork (including a hard copy of your negative PCR test and the EHAS pre-approval) being reviewed before you got to passport control, where it was quickly rechecked. Literally, as the officer stamped my passport I saw my luggage just coming out onto the baggage carousel (yes, it made it…a fairly unique experience for me!) and I was off…almost.

I walked out of the terminal and immediately into a taxi for my US$25.00 ride to the Windstar Star Breeze.  As I approached I saw the Royal Caribbean Rhapsody of the Seas, the Carnival Legend and the Celebrity Millennium, but where was the Star Breeze? She was there, but hidden amongst these much larger cruise ships.

And then I had a frustrating tour of the entire port as my taxi driver didn’t know where to go…and then she picked up her lunch…and then took a bathroom break…and then, finally, got me to the ship.  (Regardless, with the economic effects of Covid on this small island I still wanted to and did tip her generously.)

After my luggage was swiftly taken, I was greeted by the Star Breeze’s nurse for a quick interview and completing a short health questionnaire. Next my passport was checked and I was taken by golf cart to the ship. As the golf cart approached the ship, there were three people heading back to the ship, but before the cart even stopped to pick them up I heard, “Hello Eric!” Yup, the staff recognized me from afar and remembered my name! I was, alas, Home.

I was dropped off and then escorted to Amphora (the main restaurant) for another PCR test. While I waited I was offered a glass of bubbles and given a quick pitch to purchase a beverage package (more on that later). Having passed my second PCR test in three days, I was given my room key (with a pitch for the spa – more on that later) and I was finally Onboard!

I was escorted to my suite (that is a nice, personal, touch that has been dropped from too many luxury cruise lines) a French Balcony Suite in the new section of the Star Breeze. Honestly, it is far nicer than I thought it would be. So many small, but appreciated touches…right down to the understated nautical design woven into the elegant duvet.

Before I discuss my suite, I want to underscore just how impressive the new Star Breeze stretch and refit is. Over the next week I will discuss each of the new and improved areas from the Veranda to Caudro 44 (where I dined my first night – see below) to the Star Grill to the new huge Spa to the new and very cool midship pool and whirlpool and so much more. Virtually every exterior surface was brought back to bare metal and then painted, electrical cable and plumbing runs are new, even the signature dual exhaust stacks are new, etc. Heck even “my” whirlpool on the bow and its teak surround is brand new!

What really impressed me and the Windstar vision is that all the midship decking is true teak rather than the less expensive coating (Bolidt) that looks like teak. Yes, there is Bolidt in some areas, but not where the prime guest experiences are.

Now to my suite!  Having sailed on this ship and her Wtwo sisters, Star Pride and Star Legend before their stretches (as well as when they were the Seabourn Spirit and her sisters), the layout is very similar, but different…and for the most part improved. My suite has the bed near the brand super-weatherproof new French Balcony doors (which are now in all of the balcony suites). Thus you walk into a suite that feels much more spacious and easy to maneuver through. Two truly comfortable chairs and a full-sized sofa with both a coffee table, side table and a neat fold-down table (perfect for dining in your suite with both guests having comfortable chair seating).  (Note: There are two versions of the new suites with the other having the more expected sitting area by the balcony/window.)

The walk-in closet is almost identical to the ones in the “old” suites but with slightly more modern finishes. Curiously absent are the three hanging hooks, which really should be reinstalled.

The bar area is now opposite the front door so it is more convenient and logical, not a bulky divider between the living and sleeping areas. This results in a more open feeling which is enhanced by the curtains between the area now a more sheer linen (previously heavy and dark fabric).

The entertainment system, located opposite the bed, is excellent and state-of-the-art with everything from menus for all venues, movies,  your account, etc.  The television is very large and mounted on an articulating arm so there is easy viewing from the sofa (not so much from the two chairs unless you move them…though there is space to comfortably do so). 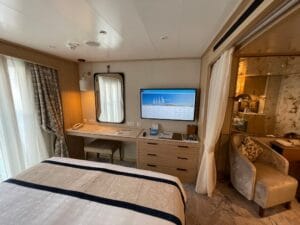 There are plenty of power outlets throughout the suite with USB and Hi Power USB outlets by the desk/vanity – which also have three large storage drawers – and both sides of the bed along with 220 and 110 volt outlets. The lighting also is excellent with more logical and simple switches. 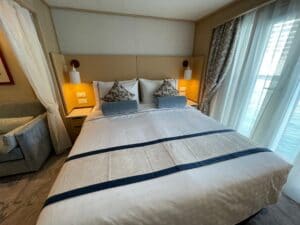 But the biggest upgrade to the Star Breeze suite experience is the bathroom, which has been radically upgraded.  The basic layout hasn’t changed, but those frustratingly small showerheads over bathtubs have been replaced with incredible walk-in showers with rain shower and handheld wand showers…and I am talking thunderstorm downpour….with glass doors. (Twenty percent of the suites do have bathtubs for those that enjoy that experience.)  There are now two large modern and very functional vessel sinks. Counterspace is a bit limited, to be honest but there is shelf storage below and three shelves on the wall.

After settling in, I had a quick lunch at The Veranda. I’ll discuss all of the upgrades and expansions in another article.

But I can’t move on without noting that the pasta I had was exceptional. Not only was it beautifully plated it was perfectly cooked and so flavorful with lots of garlic and crisp bacon in a fresh tomato sauce. Pace yourself, Eric!

After a quick shower (way too quick considering that awesome shower needs to be appreciated), it was off to a private cocktail party for the media and catching up with Windstar’s President, Chris Prelog, who I have known for too many years, as well as some of my media friends, we went out on deck for the traditional Windstar Sailaway…where the upgraded band played afterward. (Did I mention Windstar has truly upgraded the experience?). 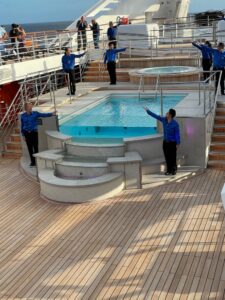 And then a true Culinary Experience at Cuadro 44. I was not expecting what was about to happen.

I had dinner with Steve Simao, Windstar’s VP of Sales. As we sat we were given some seriously delicious anchovies as well as olives. Kristy came over and offered either a traditional sangria or a cider cocktail. I chose the cider and the beginning of a great Catalan-inspired evening.

We ordered every Tapas to start. I mean it is me! As the plates arrived, each one beautifully presented, it hit me: The design of the space, like Sushi on the Seabourn Encore and Ovation, is focused on allowing the food to be the star. So too the very organic plates and serving dishes.  And it works! 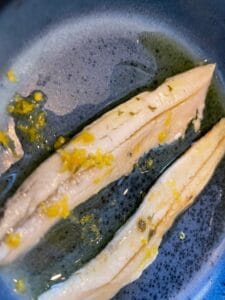 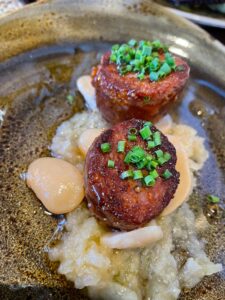 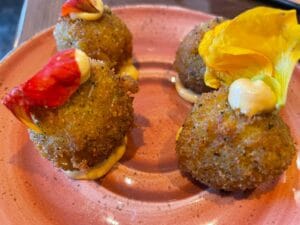 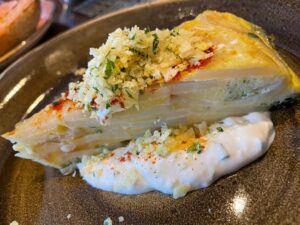 The highlights of the tapas, at least to me, were the Jamon Iberico (24 month aged and lightly drizzled with a delicious olive oil…and definitely finger food…and The Real Deal!!!), Pulpo Gallego (charred octopus), Paella Croquets, and Grilled Chorizo, but every dish was excellent.

And as I dined the more I felt immersed in a Catalan world as I could have easily been sitting in an intimate restaurant in Barcelona, Spain.

Bacalao (salt cod) with Manila clams was my main course and it was both cooked perfectly and delicious. 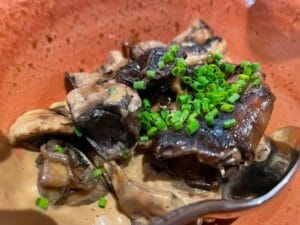 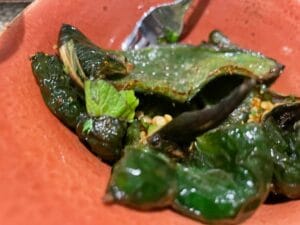 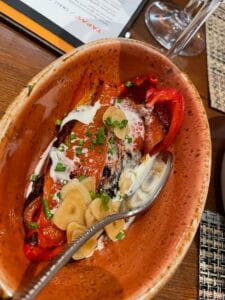 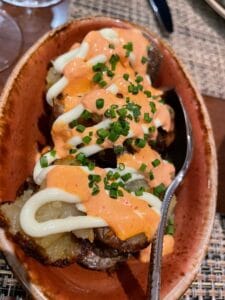 And, again because it is me, I ordered every side dish. Surprisingly, for me, the Grilled Porcini Mushrooms were a showstopper. Amazing!  If you are a fan of peppers (I am not, but I appreciate them) the Shishito Peppers were very good but the Piquillo Peppers were even better.  Patatas Bravo I know will be a favorite, but were a bit too “American” for my evening. 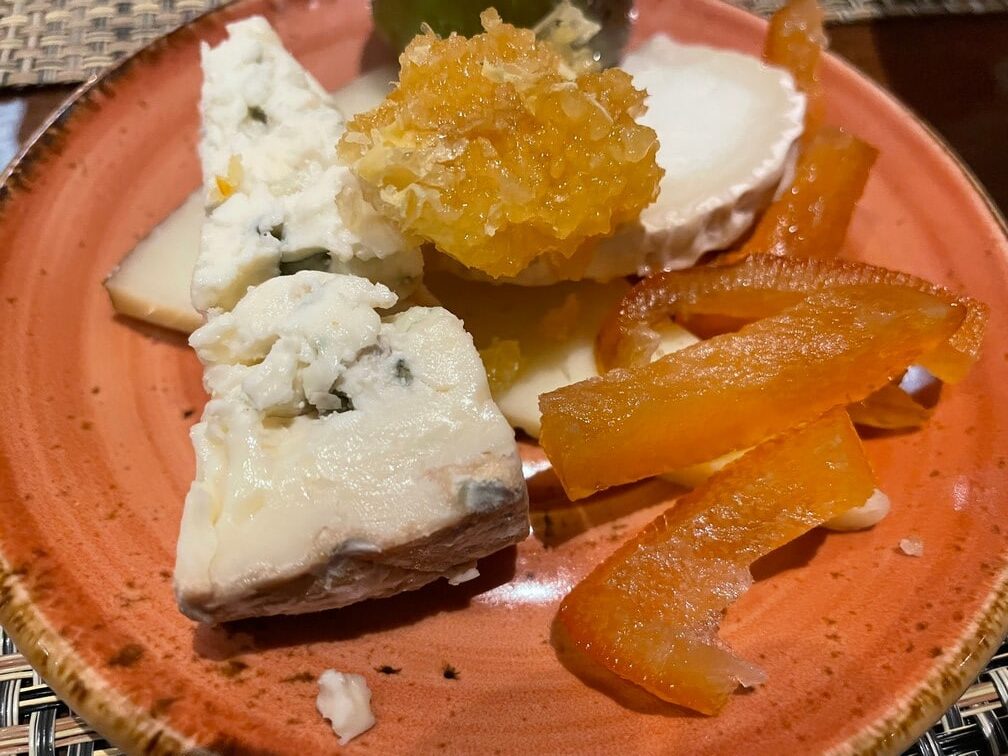 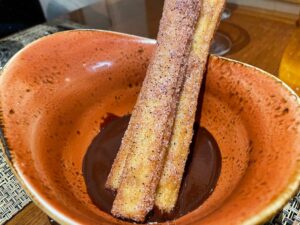 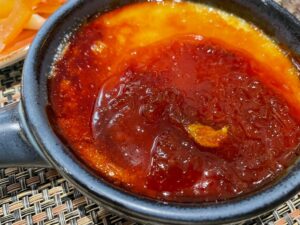 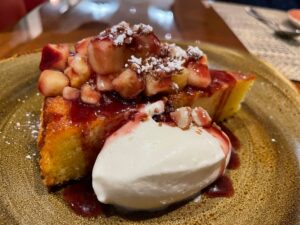 While we sampled every dessert along with an excellent (and truly hot – a difficult task on some ships) double espresso, the Cheese Plate with Candied Ginger and Candied Orange Peel was outstanding.  I mean the Creme Brulee and Churros weren’t a hard sell either, but…

So you think Windstar was done with me for the evening? Nope. Kristy appeared and said, “Would you like your whisky with three ice cubes now?” Have I mentioned I felt like I was Home?

So off I was for a nightcap, a Dalmore 12 year whisky…with three ice cubes…where I listened to a wonderful singer and a pianist before heading to bed.

Oh, it feels so good to be Traveling.