Our first landing in Antarctica was Yankee Harbor, as it was last year when I took this cruise.  What I love about nature is that predicting it is impossible and expecting the same result is foolish.

Reflecting on my day, what I found of great interest is that my anticipation, my excitement and my enthusiasm was greater this second time.  I have found that everything has slowed down and I am less distracted.  Why?  Because I don’t have worry about my parka, how to get into a zodiac, why being in the first landing group isn’t necessarily the best one, how does kayaking work, what happens if something is cancelled due to weather, etc.  Knowing all of these sorts of things has freed my mind.
Last year there were many young Gentoo chicks, skuas trying to steal them (with some success) and a lone baby elephant seal that didn’t appear to be that healthy.  This year was totally different.  The number of Gentoo penguins was far less with most of the remaining chicks much older and the skuas being far less of a threat. 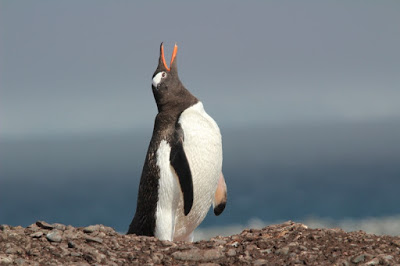 In an area away from most penguins were a fur seal and young elephant seal lounging together.  Remember when I wrote that you need to Put the Camera Down and just sit and watch nature, well this was a perfect example.  Rather than snapping the first photograph and moving on, I remained and just watched them for a while…and then the two decided they needed to have a little bit of a fight! 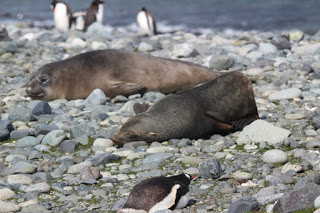 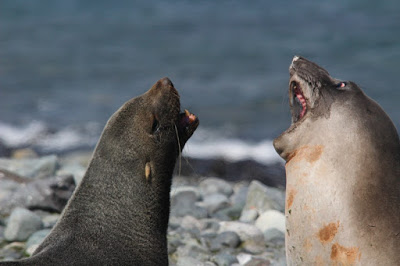 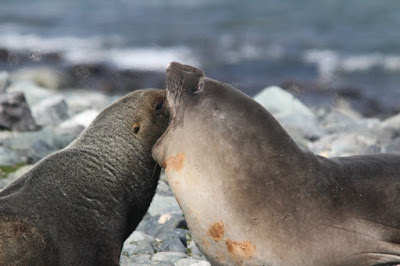 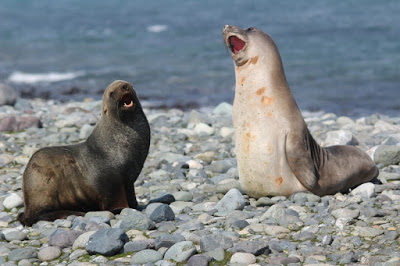 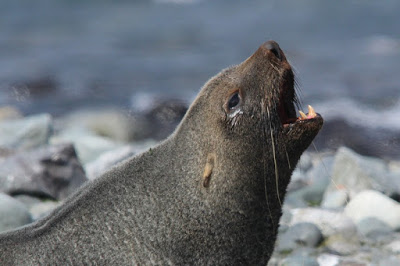 After the fight was over they returned to being those cute animals that you want to believe they are. 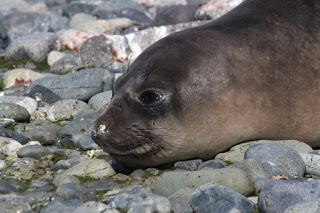 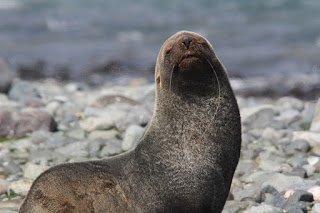 And then there were three large elephant seals lazing (for the most part) on the beach while they are undergoing their catastrophic molt when they shed all of their fur. 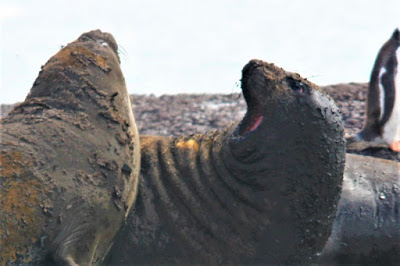 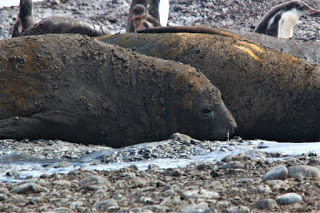 There is a long spit of land (about half a mile) you can walk out on and back (or flag down a zodiac back to the ship).  Near the end of the spit was a single Weddell seal sleeping with a few of the Seabourn Quest right behind it. 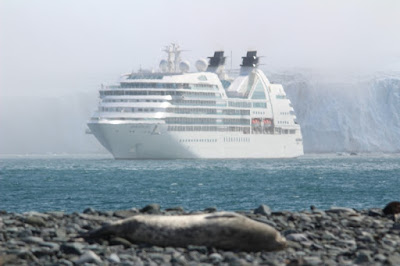 On my way back to the landing area I came across a resting skua; a beautiful bird despite it’s life of dining on penguin chicks and carrion.
All in all it was a great day on Yankee Harbor. 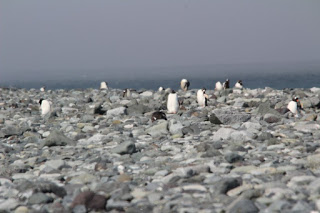 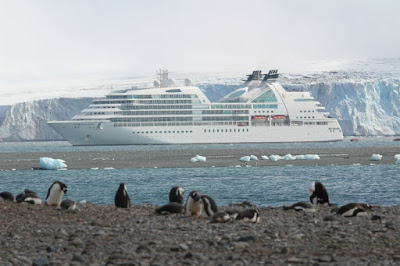 But, alas, our day was not over.  Captain Alex decided to bring the Seabourn Quest right up to Iceberg A57A and a stunning blue iceberg.  It is just impossible to capture the size and grandeur of of either, but at 21 miles long and 5 miles wide that is just an understatement. 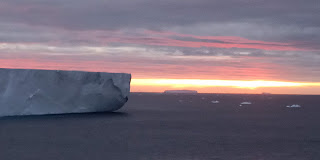 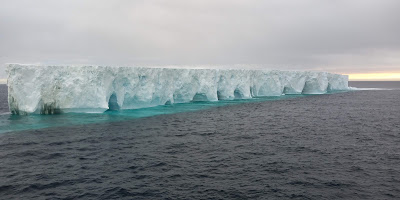 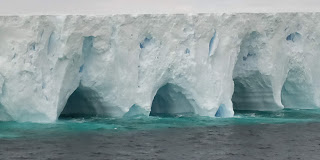 After that impressive show, one might think things on our Antarctic journey on the Seabourn Quest could not get better.  To the contrary, our next day was even better…at least for me!
Our next landing was on Half Moon Island literally within sight of Yankee Harbor.  It is the home to Chinstrap Penguins and is a new landing for me.  I was initially concerned because the weather forecast called for rain, but I awoke to a WOW!; absolutely amazing view from my Suite 601 shortly after a breathtaking sunrise as we approached. 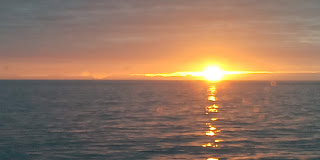 Half Moon Island is relatively small, but quite long.  The zodiac ride to the shore was short.  We arrived to a surprise (at least to me) a beautiful wreck of small whaling boat.  It is another reflective reminder of the history here and how the environment (cold and uninhabitable to most things) preserves it.  What I had not a clue of is that it would pale in comparison to that which we would see that evening, courtesy of the outstanding seamanship of Captain Alexander Golubev. 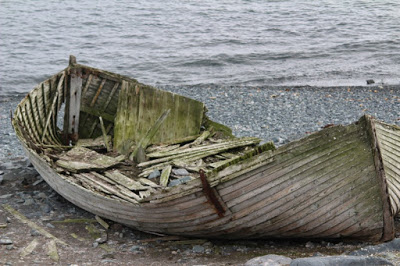 With Giant Petrels, Antarctic terns, Kelp gulls, snowy sheathbills, skuas and blue-eyed shags (cormorants) flying about, the Chinstraps walk along various penguin highways (they walk along the same paths) heading toward the water thin and dirty and returning plump and clean. 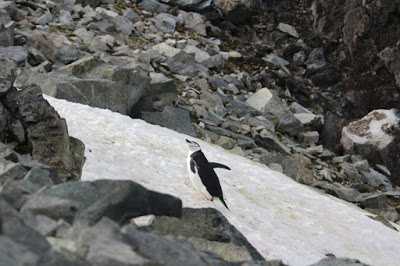 After a walk behind the island (where the kayaks were lined up and unused due to the blowing winds) there was a young elephant seal looking fairly miserable in his catastrophic molt along with three Weddell seals lounging in the snow in the distance. 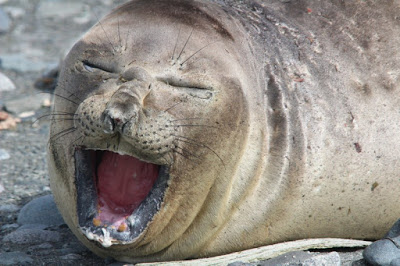 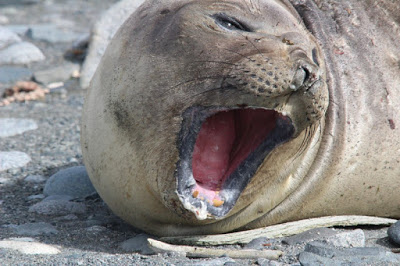 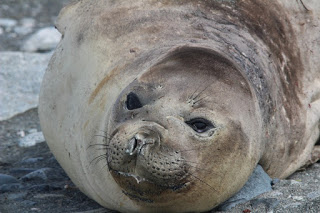 I had some very interesting chats with some of the Seabourn Ventures team members during lulls in other guests asking them questions.  (Some of their shared perspectives will be discussed in a later article.)
After two days of landings and taking more time just observing the wildlife and marveling at the scenery I felt more than fulfilled and truly reflected on how lucky I am to have the privilege and opportunity to return to Antarctica.  But what I didn’t yet know was that I was about to be blown away by Captain Alex and his decision for us to not only visit Deception Island and its huge colony of Chinstrap penguins, but to sail the Seabourn Quest into this still active volcano’s caldera.
Deception Island was a center of whaling and whale processing.  A riveting history of the island and an explanation of the whale processing facilities in the Antarctic was provided by the Seabourn Venture’s Trevor Potts (an amazing individual who has kayaked across the Bering Sea and the first man to re-sail Shackleton’s epic rescue mission in the “James Caird” from Elephant Island to South Georgia and the second to follow Shackleton’s route across South Georgia) that truly brought the horrific, but important, whaling industry to life and prepared us to understand the remnants of structures we would see…if Captain Alex could complete the challenging seamanship maneuvers.
With snow coming down, after passing the penguin colony, the Seabourn Quest approached the narrow opening into Deception Island’s caldera. 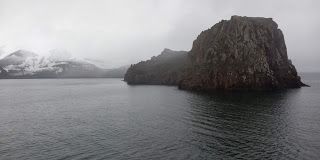 As the Seabourn Quest entered Deception Island’s caldera my breath was literally taken away.  It was like sailing into an Ansel Adams’s photograph while being captivated at the incredible hardship it would have been to have been a whale factory worker in the almost claustrophobically small shoreline.  This was clearly a Beauty and the Beast life…as well as a lesson on why protecting Antarctica and its wildlife is essential.
Note that the photographs that follow are color, not black and white, and it was simply impossible to capture the grandeur, the starkness and the power of our time there! 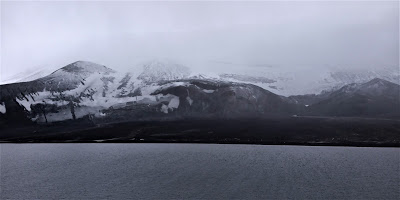 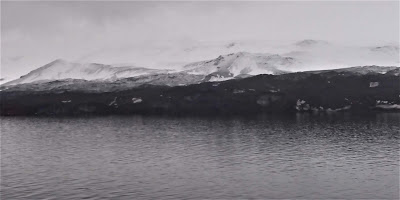 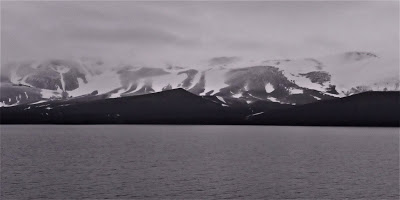 After experiencing this beauty I was literally up for hours.  Reflecting upon this moment I know that when I talk about my experiences in Antarctica it will not be about the whale sighting I had while writing this article or the fur seal and elephant seal having a fight, but the something far greater; something that words will always be unable to fully explain.
Thank you Ansel Adams, not only for your photography, but for writing that series of books that taught me so much about how to see.