A Thanksgiving Story That Is “Bull”

It has been a very hectic time for me of late.

I spent most of last week at the Global Superyacht Forum in Amsterdam, am in the middle of a trial on one of the weirdest and most troubling admiralty cases I have ever been involved in, am doing my “travel agent thing” with many clients either just returning or about to depart on Seabourn and Oceania cruises, enduring the frustration of my New York Jets (and swallowing the huge cost of tickets next year in the new stadium), completing some sort of ultrasonic cardiac stress test (which I passed with flying colors), engaging in various family goings on and preparing for the holidays.

My respite has been my breakfast with the local farmers. The farming life, with its dependency on weather, weeds, wildlife, etc. causes farmers to have a rather unique approach to problems and stresses. It is not that things don’t bother them or stress them out, it is that they are required to live by the “What are you gonna do, cry? You just have to get on with it” approach.

My farmer friends afford me the honor of allowing me to partake in just a little bit of their lives and, therefore, just a bit of their lifestyle trickles down to the lawyer/travel agent come wannabe farmer. In that role, I dutifully am a participant in their annual NASCAR pool and, as such, I am invited to the parties held at my friend, Tom’s farm, for the first race (Daytona 500) and the last race (Homestead) each year. This past Sunday was the end of season party.

I arrived and found myself in charge of setting up the mini-pool for the driver who leads half way and at the end of the race ($5.00 per car randomly chosen) and playing bartender. With the pre-race show on two televisions and football on the third, the cousin who owns an orange grove in Florida stops in, the woman who owns the local horse supply business arrives (her husband still out in the fields planting soybeans won’t arrive until later), the guy from the General Store tells his stories, Tommy Jr. who is taking over more and more of Tom’s farming starts drinking a Coke so that when the guy with the suped up Mustang arrives he can take it for a spin (but eventually gives up and tops his drink with cheap bourbon) settles in…and the rest of the regulars arrive as the race is about to start. It is, for me, a little slice of heaven and I feel truly privileged to be allowed to share this.

And then…(you are not going to believe this!):

Remembering that I live in New Jersey…you know the place with the reputation for being smelly and overbuilt…Tom, for reasons that I cannot comprehend (hence I am not a true “redneck”), is taking delivery of three full grown Longhorn steers weighting about a ton each (yep, 2000 pounds or more.) (Tom already has four.)

Why this is being done in the middle of a NASCAR party I also cannot figure out. (Again, I am not a true “redneck”).

However, as the steer are offloaded from the transport, they essentially stampede, trampling Tom, breaking through a fence and are now loose in Colts Neck! With a call-to-arms we pile into various pickup trucks and a Chevy Tahoe to roundup the strays…wandering through the upscale residential areas picking up the tracks and then being questioned as if we were casing the mansions looking to break in.

We then get a call that Tom found two of the steers…or should I say the largest bull found Tom, horning him in the head, knocking him to the ground and then charging his pickup. So, with blood flowing, does Tom go right to the hospital? No, he continues the attempted roundup for another 30 minutes and then is escorted to the hospital. (Not to worry, he is sort of a super-redneck, so his head is stapled, his back is sore, his truck is gored…and he was at breakfast this morning.)

As darkness falls, with Tommy Jr. and Joey now out with their rifles, the police combing the neighborhoods and a police helicopter circling there is nothing we can do…so we go back to Tom’s house, finish setting up the NASCAR pool, drink some beers and watch the race. (And no, I didn’t win the pool or the mini-pool.)

At about 9:00 p.m. I receive a call at home that two of the steers were located and were shot. They were just too dangerous. The third, however was still on the loose and now probably more dangerous than ever. But it could not be found.

So last night, as I was driving home from my 8 hours of trial work, tired and stressed, I call Tom to see how is doing. He tells me he has to call me back because they just located the third steer…the one that attacked him. Later I am told he was put down as well. 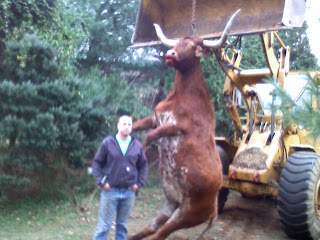 So what does this have to do with Thanksgiving? I mean three steer were put down, if only a few weeks before they were to be turned into roasts anyway. My friend was injured and could have been killed. The cost to the farmer is not insignificant as well.

Seriously, what does this have to do with giving thanks?

I am thankful that I have been enriched by so many things. While talking to billionaires may seem cool and being treated like royalty on Seabourn sounds devine, the next time I am in Greece taking in the Acropolis, pondering my heritage as I gaze at the Great Pyramids and Western Wall, or am in Italy enjoying some incredible wine and food, I have the joy of knowing that for me it is not about accomplishing those tasks, but savoring those moments as rarefied honors and thinking about the men and women that toiled to build the great monuments and to farm those ingredients were probably not so different from my farmer friends.

They were anything, but perfect, but they lived lives of “What are you gonna do, cry? You just have to get on with it”. And they had the ability to look at the chaos and problems only to find a way to live with and appreciate them.

So rather than coddling Tom today and expressing such concern that his body is broken, his wallet is lighter and his pride is hurt, in true farmer fashion I asked the obvious, “So what the hell are you gonna do to top this?!”

I am very thankful.

All Posts »
PrevPreviousGlobal Superyacht Forum 2009 – It Is Not All Smooth Sailing…Referrals May Put Wind In Some Sails (err, Sales).
NextSeabourn Spirit – First Photographs of Its RefurbishmentNext
Play Video