French Polynesia on Windstar’s Star Breeze (January 2022) – Part VII – Deciding on, and Arriving at, an Island State of Mind 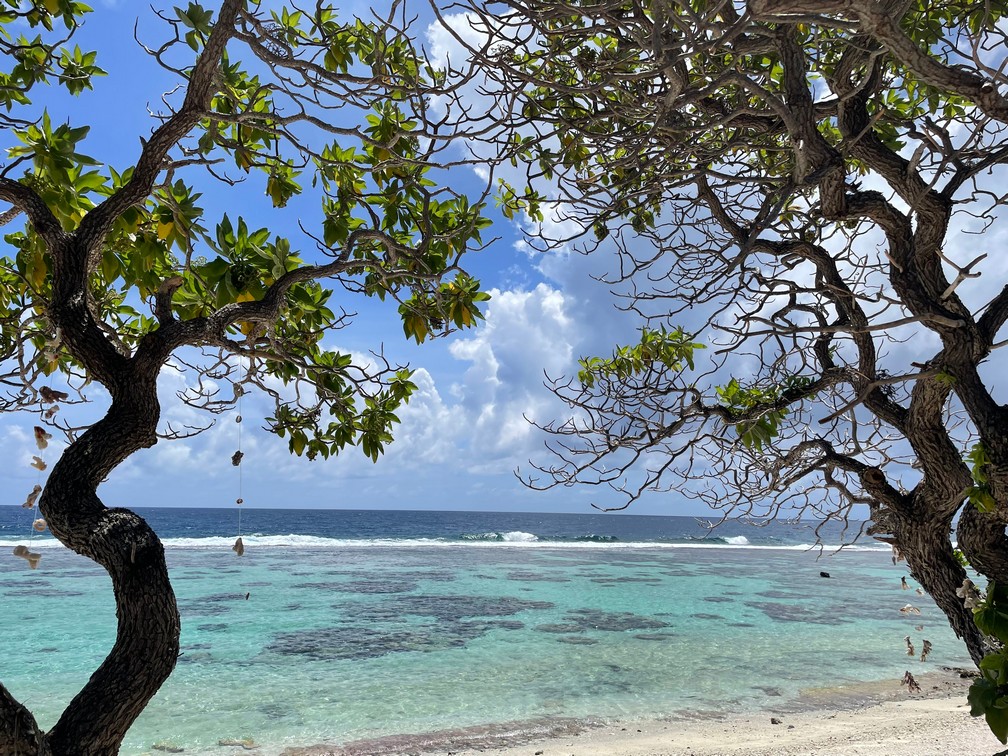 I have to state right up front that Windstar did a truly commendable job balancing the need to protect everyone from a Covid-19 outbreak against my own personal needs (as I was never infected).  And it worked!  I was kept comfortable and well fed and watered. And fortunately, (with great transparency!!!!) Windstar did what was necessary.  After testing over 200 guests and crew in about a 24 hour period there are now NO Covid positive results.  Crisis averted! Elimination of Covid on the ship. And a job well done!!!

One thing that I noticed during my sequester was that Windstar really under-sells what is offered on this journey and has too much of a reliance on the early evening Port Talks (which, if you recall, are not broadcast into the suites and are in what many would consider Cocktail Hour).  There are three really special experiences that are included that are not mentioned nearly enough; especially during the decision-making process:

I knew the first two existed, but didn’t know the details until well into the cruise. And I happened to stumble across the last one because I actually read the Daily Program.  (Strange that one of my biggest complaints is a lack of self-promotion!)  Note:  I will discuss these events later in this and in other articles.

Anyway, as we arrived in Bora Bora the ship’s doctor came to my suite at 8:00 AM to give me my fourth PCR test.  At 8:55 AM my test came back negative yet again, so I was free…and able to join my tour in Bora Bora; more specifically the Concierge Collection: Bora Bora Lagoon & Culture Tour. 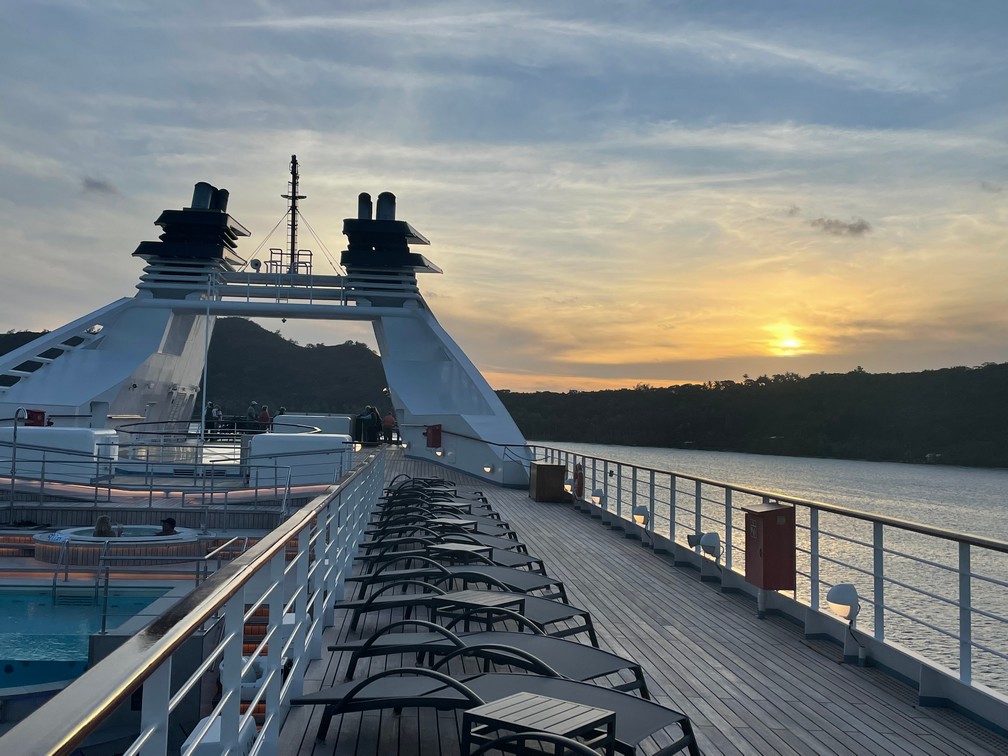 One of my pet peeves – and this goes for pretty much every cruise line – is poor tour descriptions that under-sell or over-sell a tour. This tour and its description attracted me because for me it sounded great in some aspects, but things like the “culture tour” sounded painful.  So let’s dive in…so to speak…and see how Windstar did!

Regardless of how or why I chose this tour, it was excellent for those new to French Polynesia.  Our small group tendered to the pier and transferred to two Bimini topped boats with six in one boat and seven in the other so there was plenty of room along with a guide that was quite jovial and informative…but not too informative!  As I took the tour mostly to just get out and be somewhat active, the initial stops weren’t thrilling for me, but I was thrilled by the smiles of all the other guests. It seems everywhere you experience something with Windstar people (guests and crew) are just nice and enthusiastic.  It is refreshing! 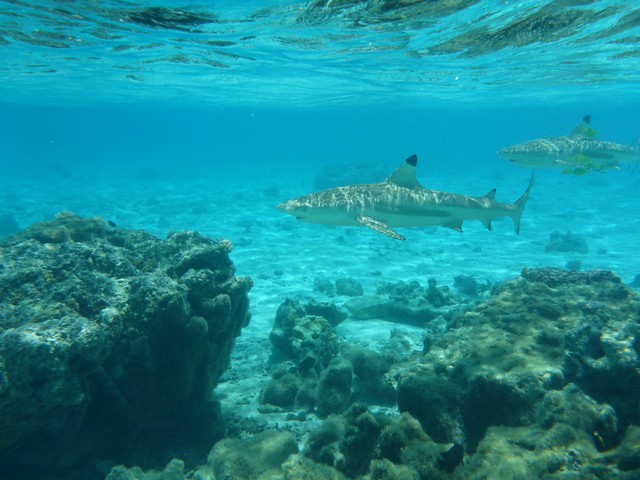 We made three stops: Swimming with the Stingrays. Snorkeling in a Coral Garden. Swimming with the Black Tipped Reef Sharks.  These are very popular spots, so there will be other boats there when you are. I am assuming there were but a few for us because of the reduced number of tourists at this time.  Regardless, there was a definite effort to keep things from being too crowded.  The stingrays and sharks were in crystal clear water. Unfortunately, the Coral Gardens were in rather cloudy water and, honestly, there were more interesting fish swimming around the stingrays and sharks than you could find in the coral gardens and there was a disturbing amount of dead or dying corals, but enough live coral to be interesting. 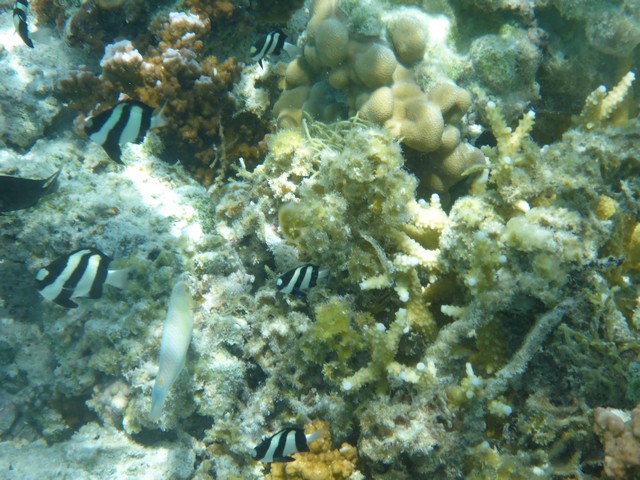 I do want to pause and excuse my marine biology background kicking in, but you need to know that if you do shallow water snorkeling for a beginner it will be fascinating.  But if you are experienced you will – if you know what to look for – see the deleterious effects of warmer water and the increase in the sun’s ultraviolet light.  In other words, Climate Change. 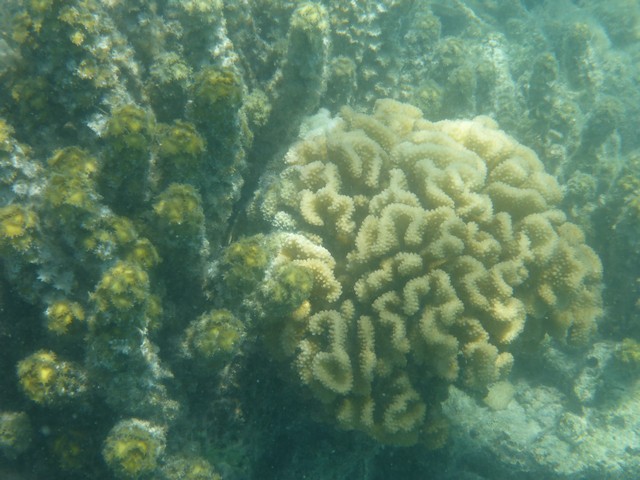 These two factors are a major cause of corals dying off.  The lack of a good bit of live coral causes the number of invertebrates (shrimp, crabs, anemones, tube worms, etc.) to drop drastically or disappear. And when they aren’t there, the diversity and numbers of small tropical fish reduce, and the productivity of the reef overall drops. There are, of course, other factors.  However, I don’t want this article to be a lesson on reef ecology! So, if you are more experienced I would strongly suggest deeper water snorkeling and diving.

After our three snorkeling stops and a fairly long boat ride we arrived at what was well and truly a little slice of heaven. This is where a picture is worth a thousand words! 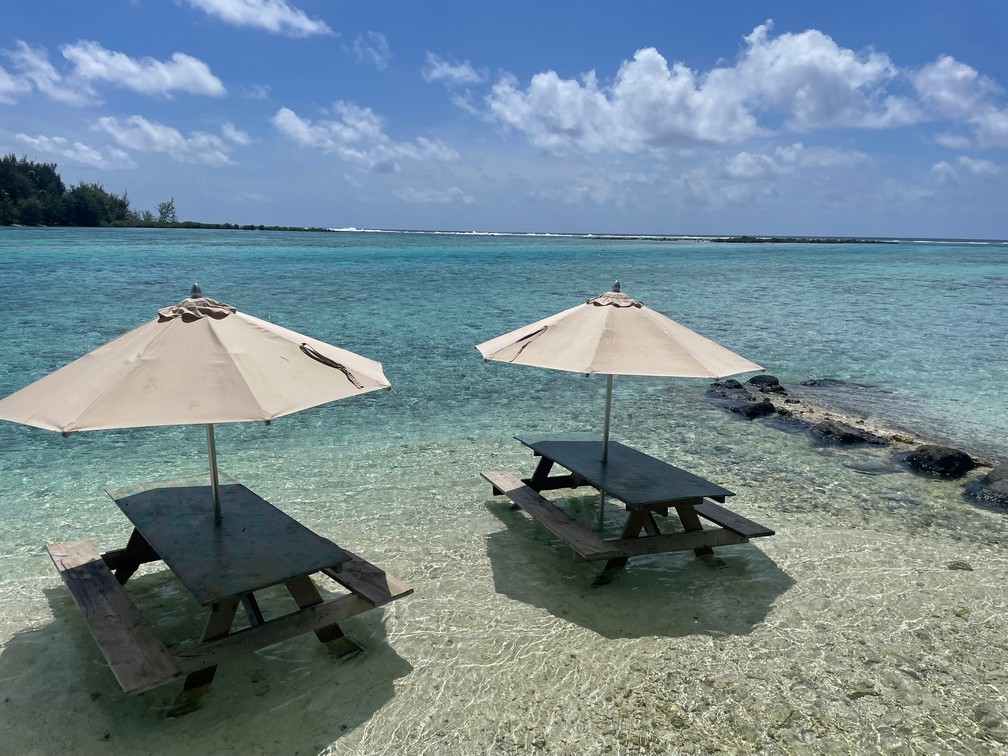 After time for a swim, snorkel or just taking in the incredible views it was time for a delicious and very local lunch. Offerings included rice, banana and coconut, plantain, sweet potatoes, taro, a variety of fruits plus, for proteins: Poisson Cru, Tuna, Chicken and Steak. (My only criticism is that beer and wine should be available as either would have completed a wonderful lunch.) 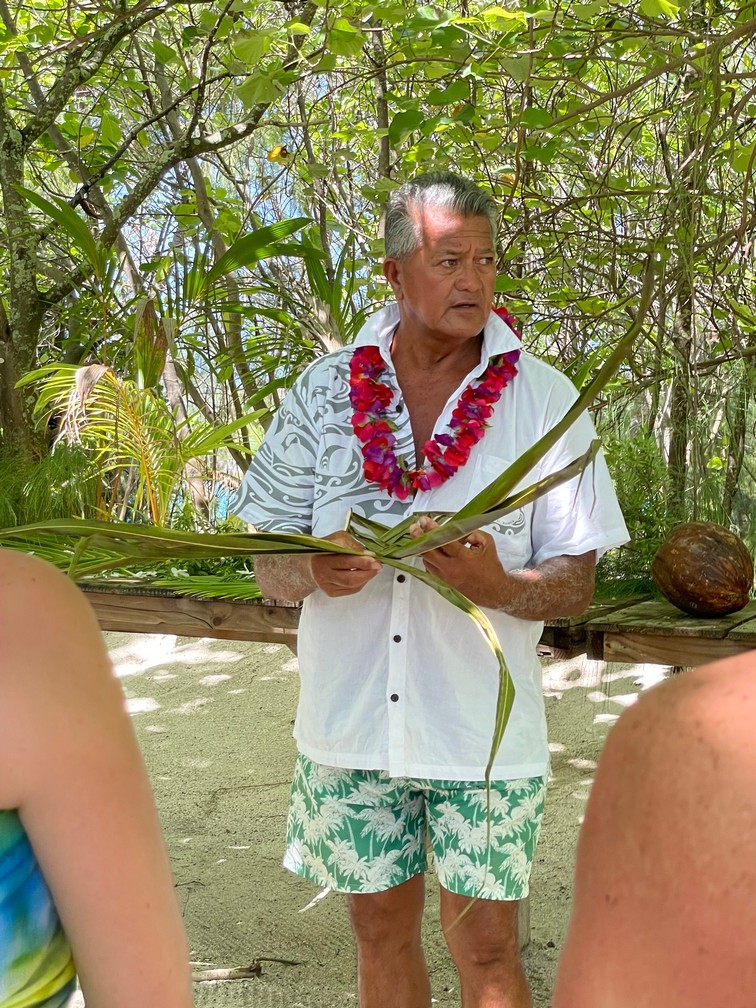 The cultural part of the tour was OK, but then again, I have been there and done that. The rest of the guests really enjoyed learning how to make pareos and open coconuts with a stick.

It was then very short ride back to the tender dock. After six hours and lots of sun, it was definitely time to head back to the ship.  Also, being a Sunday most of the shops some of the guests might be interested in were closed.

The next day was a work morning for me.  It was the first day I could use the land cellular service in a while and, thus, had fast internet.  (It is really slow on this ship in this part of the world).  What a huge relief!

My serious work was followed by a couple of hours at the private motu I had just found out about. It is the same motu where the Tahitian Evening Celebration happens.  There you will find beautiful white sand beaches, some light snorkeling opportunities, kayaking and noodles available to use and, well, peaceful and amazing views.  It is only a 10-minute zodiac ride directly from the ship.  Again, the pictures say it all. 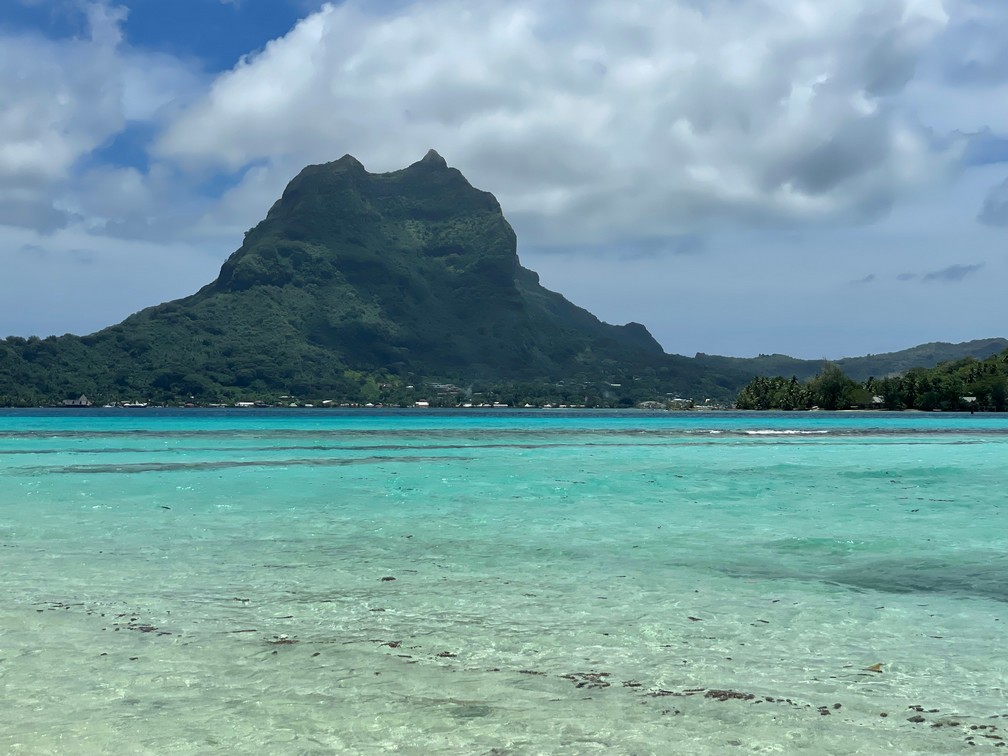 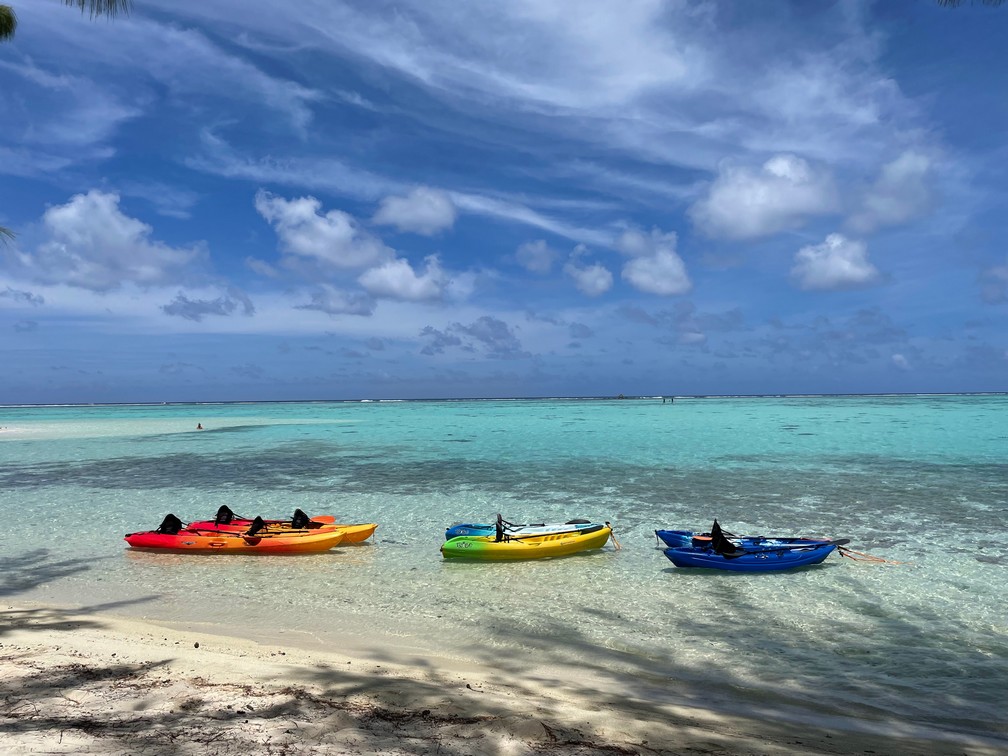 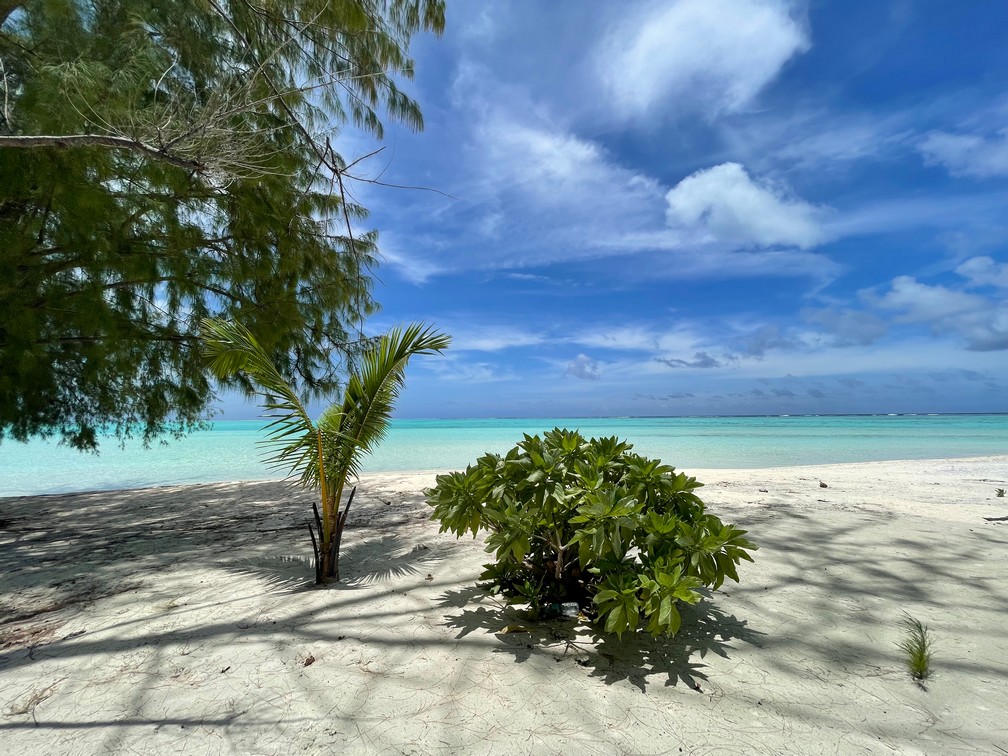 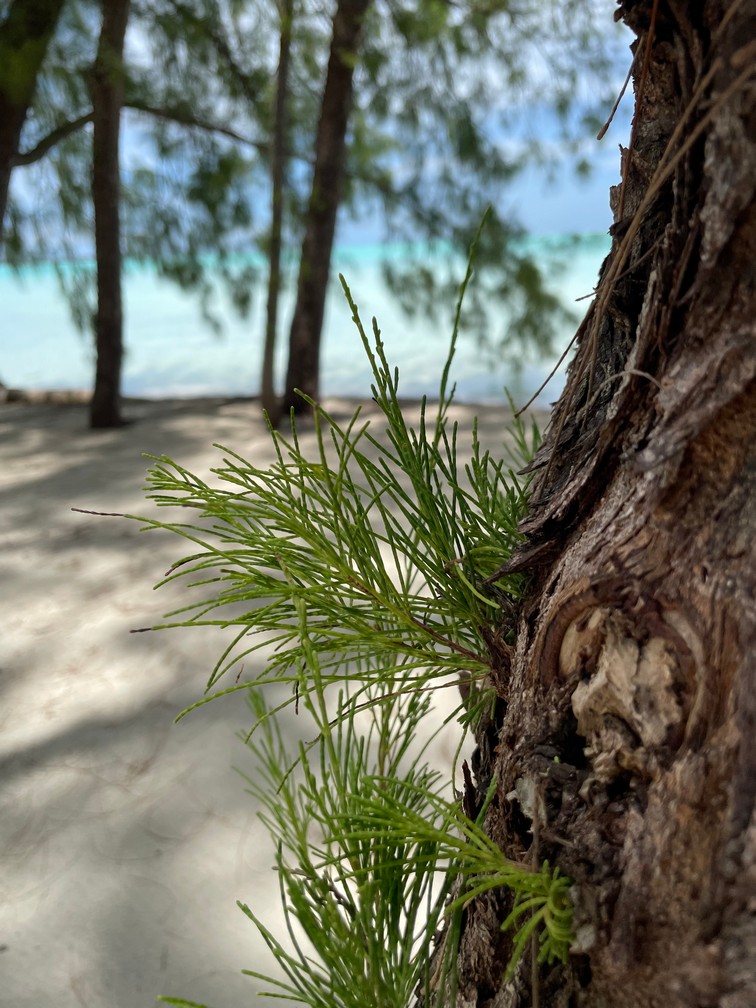 In the evening, just before sunset, all of the guests are brought to the motu for a fun evening of cocktails, a really nice buffet of primarily local offerings, and Tahitian Dancing including some fun Fire Dancing. 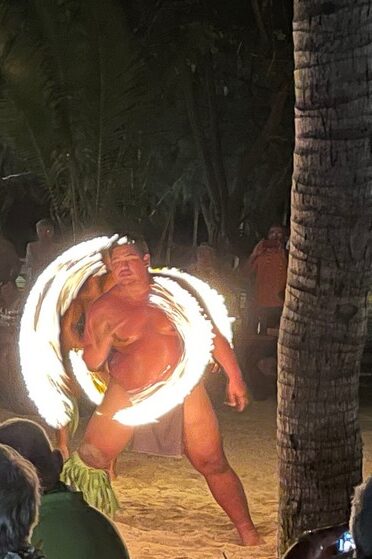 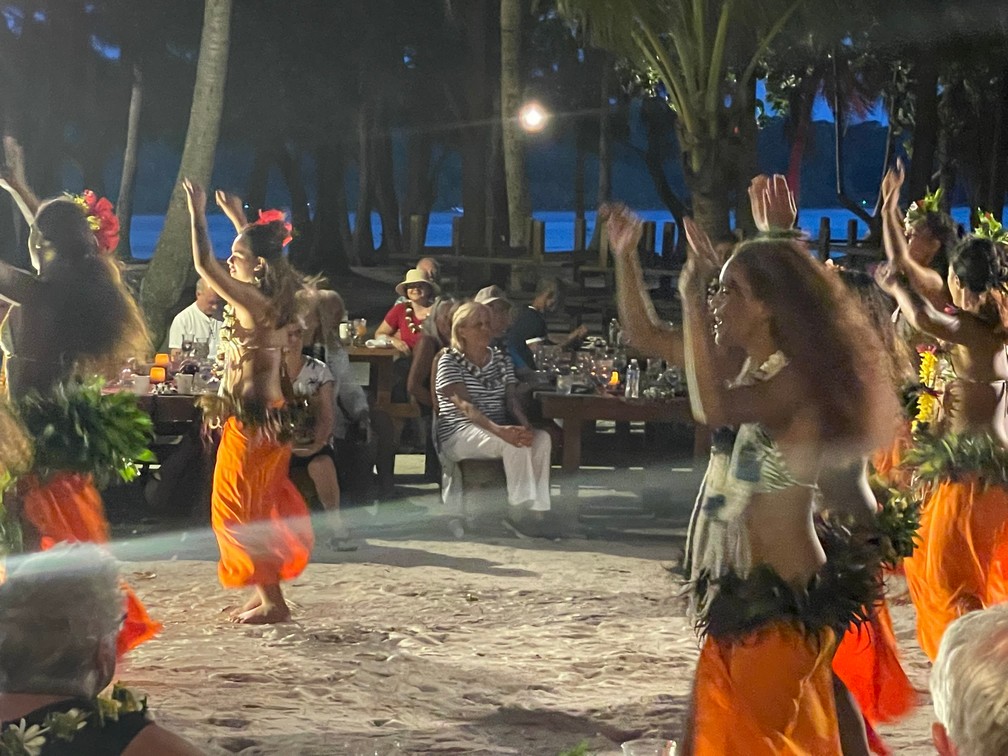 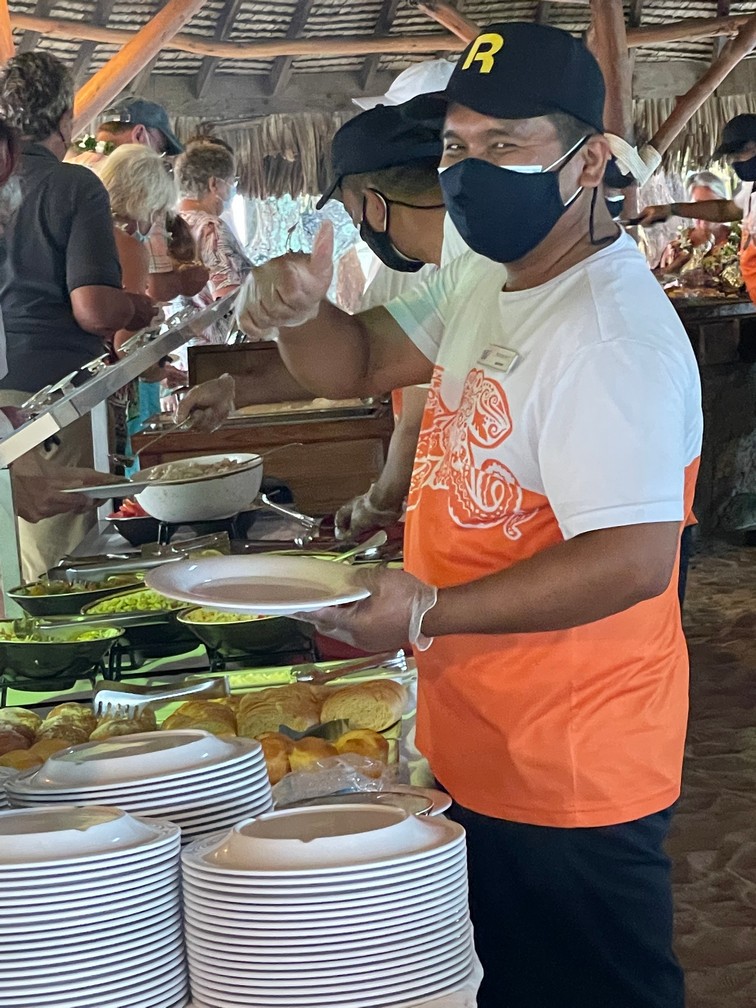 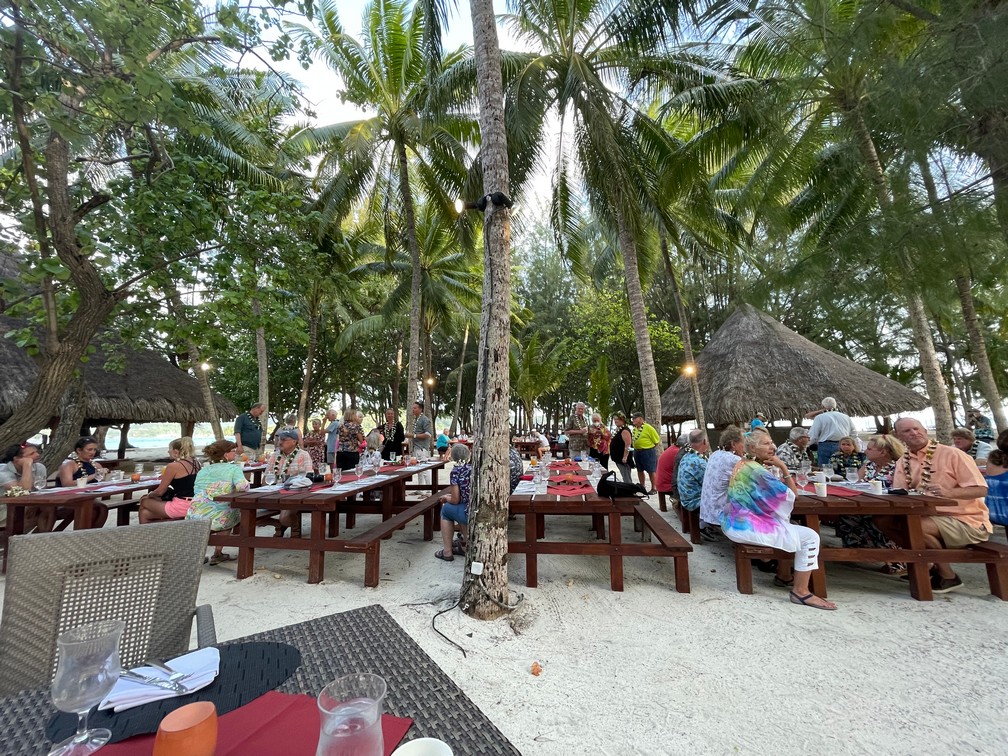 It is a very enjoyable and relaxing three hours before taking the catamaran back to the Star Breeze. 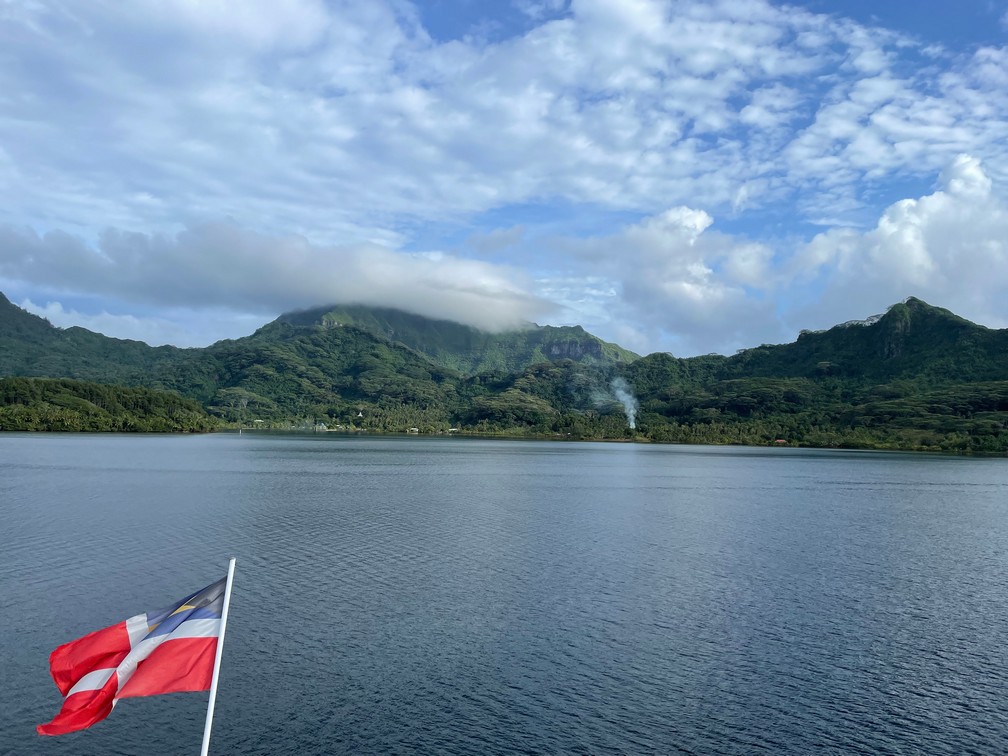 After our 9:00 PM departure, we arrived in Huahine, which so far is my favorite island. It is just drop-dead beautiful with a much more laid-back feel.  Seriously, THAT laid back! Again, sticking with only Windstar tours so I could examine them, the description was underwhelming when compared to what was delivered. “Motu picnic” sounds so touristic, but it was a 5-hour tour and I wanted time off the ship!

We tendered to a tiny pier and immediately hopped on a brightly painted boat with a Bimini top for a pleasant cruise to what was actually the guide’s home and coconut plantation on a spectacular lagoon. 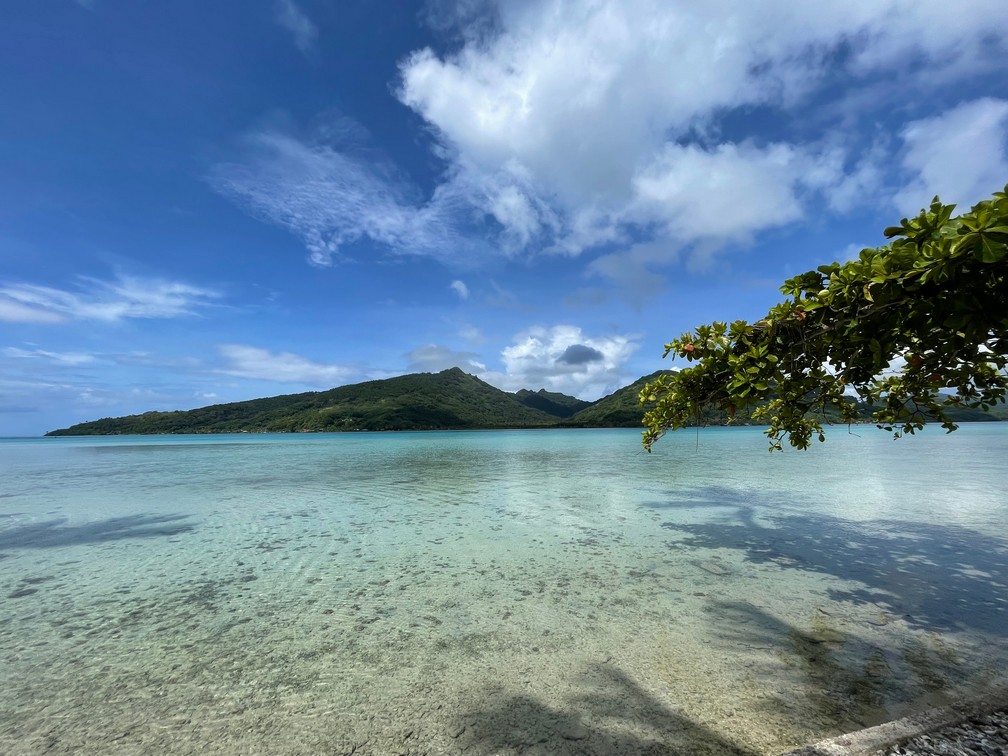 I settled in just to enjoy and then I see everyone else is walking through a grass field lined with coconut palms and some beautiful flowers…if one took the time to take it in. 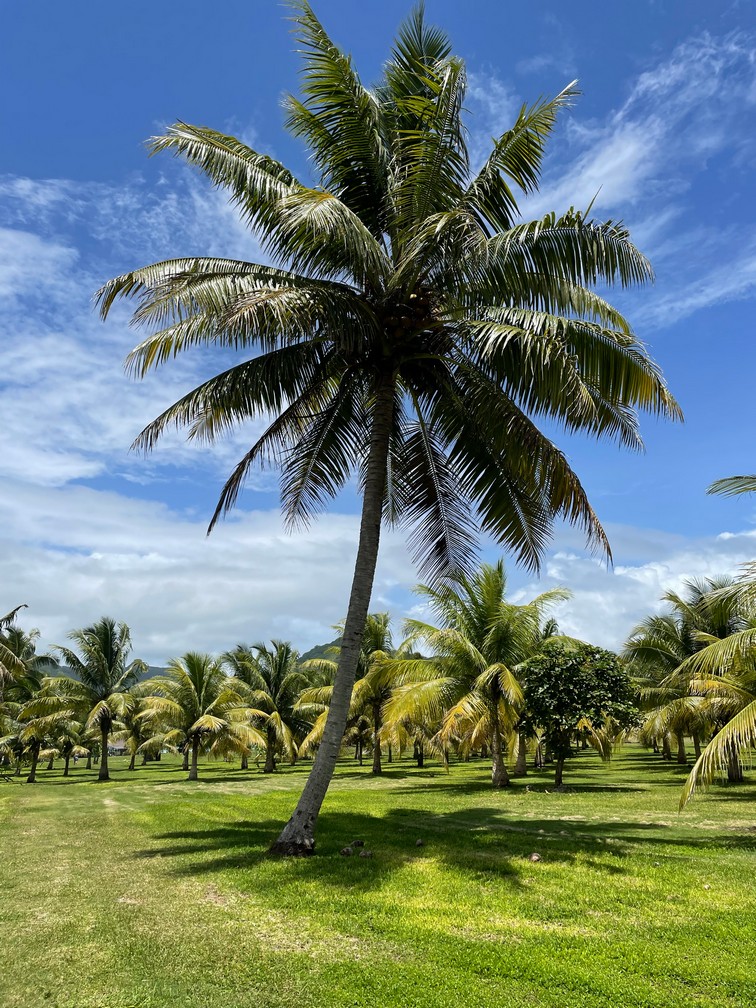 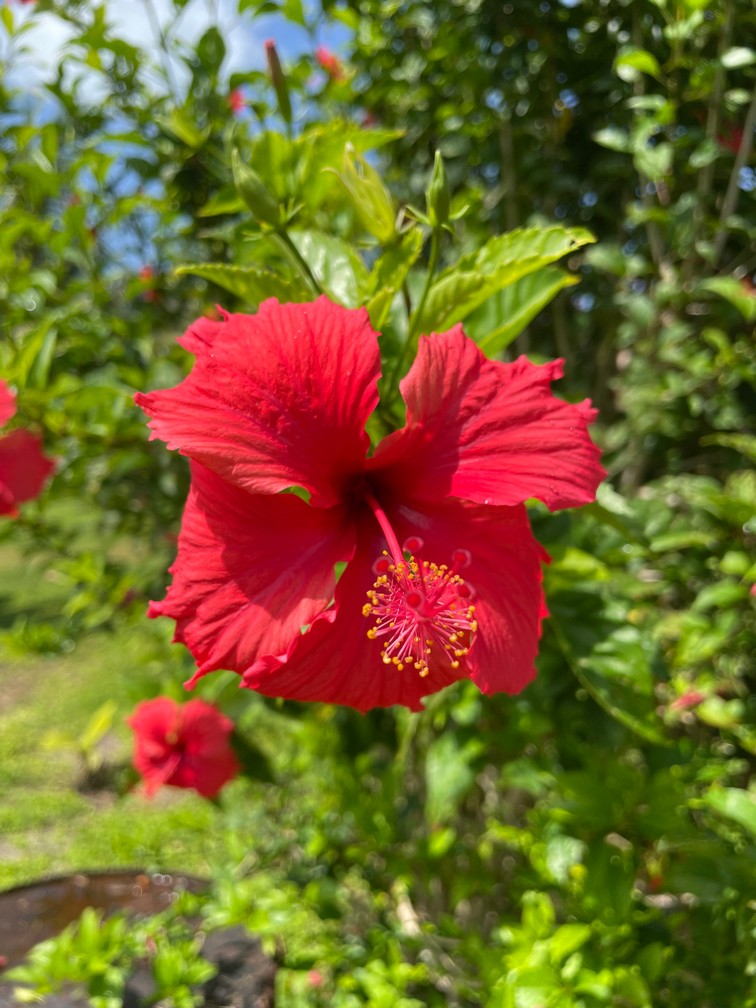 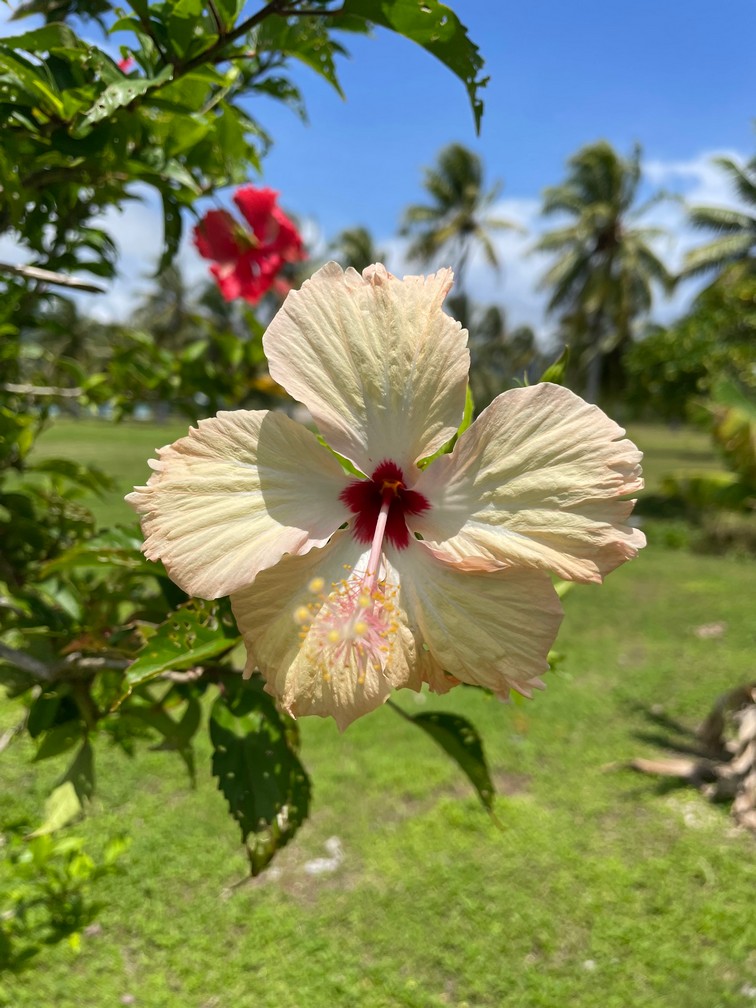 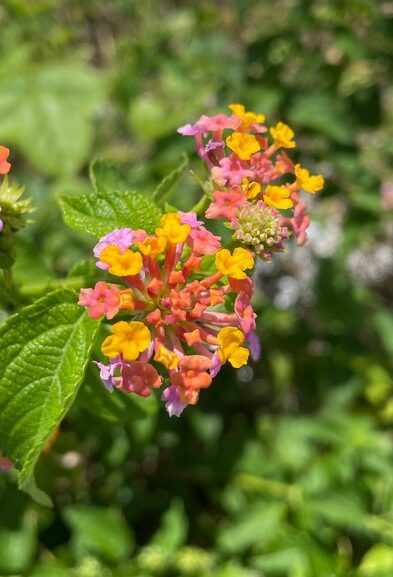 I figured I should follow and about three minutes later there I was staring at waves crashing onto a reef with a warm breeze blowing across the sandy beach. 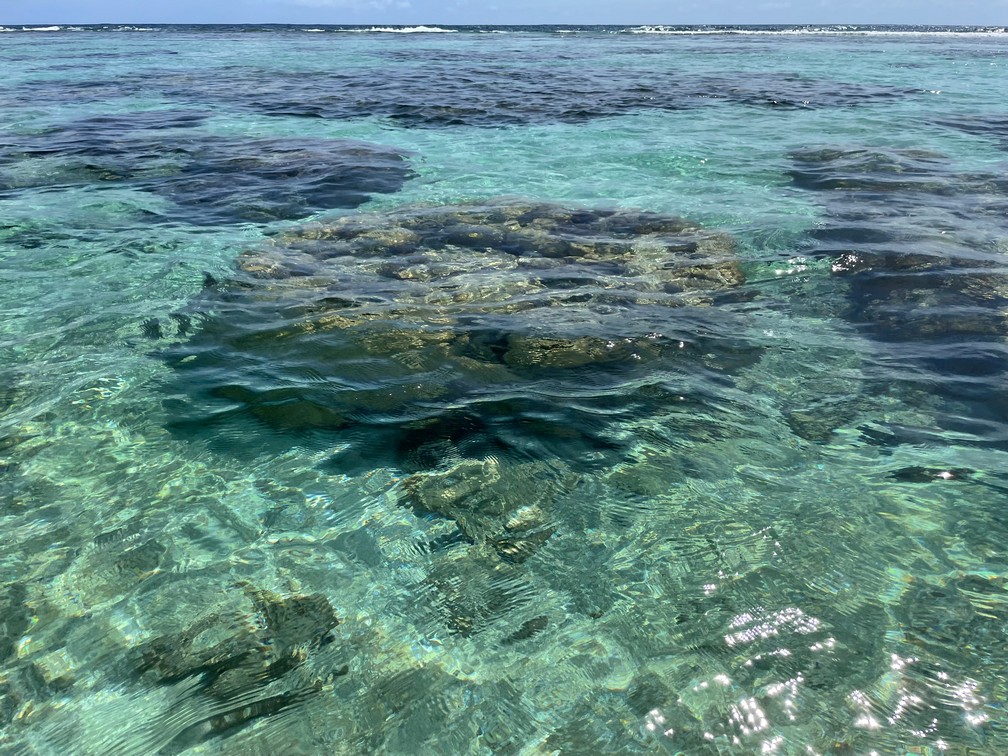 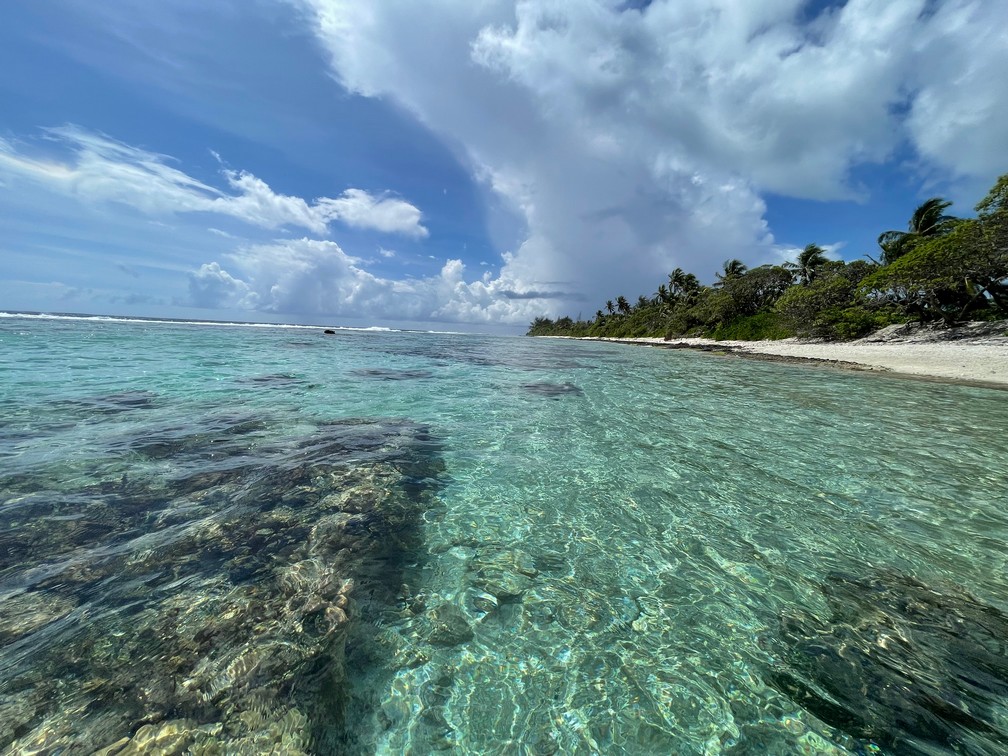 After chatting with some of the other guests I found myself in a rather weird lounge chair contemplating…absolutely nothing…with only the sound of the crashing waves. After I while I thought I’d like to just contemplate nothing in the quiet of the lagoon so I ambled back. (Sauntering would have been just too much in my then Island State of Mind.)

Upon arrival one of the local kittens decided I was supposed to pet him and I didn’t want to offend. It was, alas, about as calming as could be:

Breathtakingly beautiful lagoon with crystal clear blue water of so many shades, sunshine, a millions colors of green in the mountains on the other side, soft clouds against a blue sky…and a friggin’ kitten! 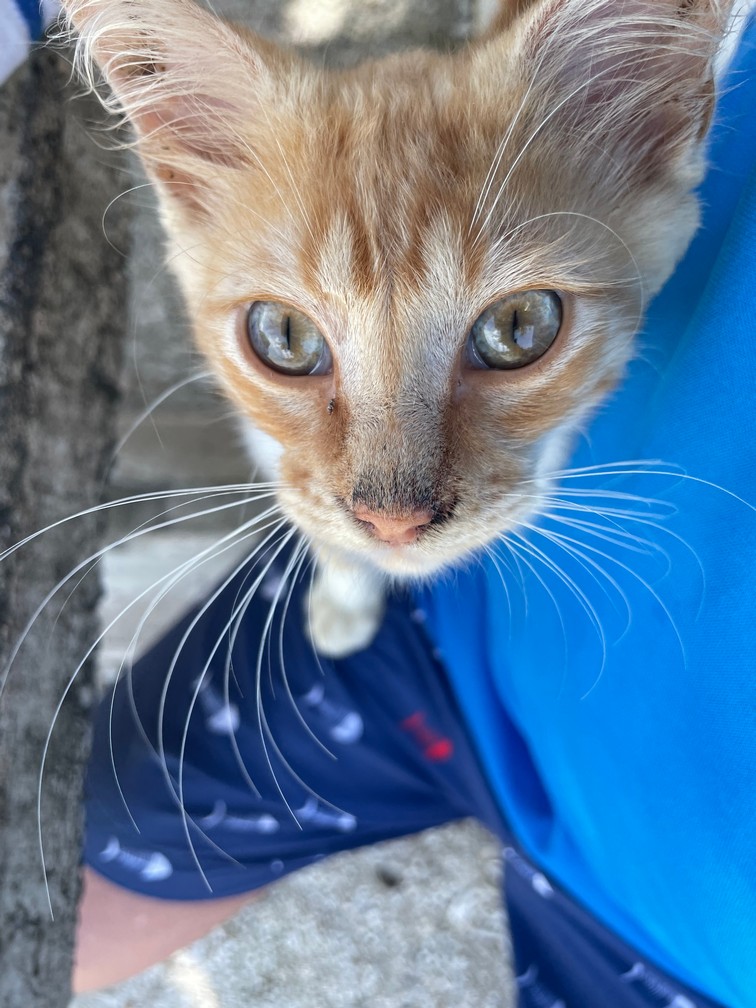 After getting over that trauma (LOL), I had a nice chat with one of the other guests. And then it was time for our picnic. Poisson Cru made in front of us, breadfruit with banana, fresh fruits, tuna and more. While everyone else gathered under three picnic table placed in the shallow water (with umbrellas), I chose to get back over to that quiet table and just be. 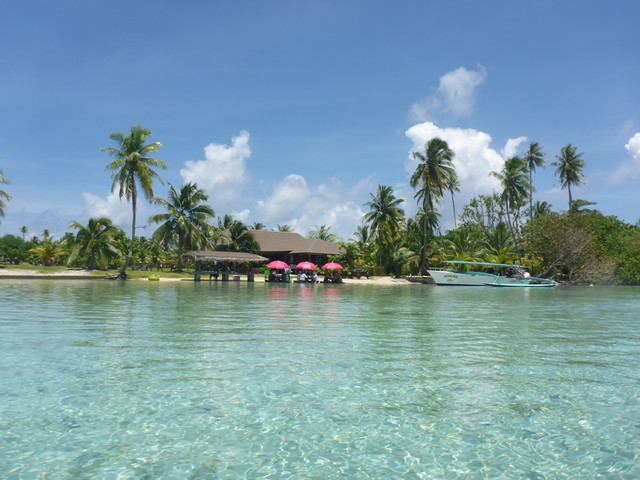 After lunch I ambled back over to the reef side and fell asleep for a bit in that lounge chair.  I awoke and said, “You know what I need to do? I need to FaceTime my daughter just to tease her.” And so I did!  Sometimes being a dad is just the best thing.

After returning to the world of thinking about nothing but the crashing of the waves, I thought it was best to return to the lagoon side with everyone else. Good timing. Five minutes later (after another how to open a coconut with a stick demonstration) it was back onto the boat.

I am not sure why, but that evening dining at Candles I decided I wanted a big wine and a bigger steak, so I ordered a bottle of a nice Amarone along with a 30 ounce Porterhouse steak. (It is one of the only two items that there is an upcharge. It is $27 and a 40 ounce Tomahawk steak is $40.)  Once again Windstar proved its culinary expertise. It was – without exception – the best one I have ever dined on. I am not talking about at sea, but anywhere!  It was seasoned and cooked to literal perfection.  Better yet, when I went to cut into it, the chef had already sliced it and reconstructed it so all I had to do was enjoy!

That night was the Crew Show, where some of the crew show off their talents or wishes that they had talent. It is just another way the Windstar crew just makes you happy.  This show is done on the second to last night of each cruise.

Fortunately for me, I have another day of this cruise plus another week…and I know the tours are so much better than the descriptions!