Today was a very introspective and thought-provoking day.

Our day started driving down the roadway running along the Mekong River lined on the other side with shops, restaurants and bars; most of which tried very hard to be Western in appearance and approach, whether it be “$1 DVD” or “Heart Break Club” or the now well-known “Happy Herbal Pizza”.

Towards the end of this rather ramshackle city is the Royal Palace and the Silver Pagoda.  Our guide (you note I intentionally never use his name), as we entered the Palace Grounds, was far more “tour guide” than normal and did not try to fill empty time with stories or reflective commentary.   I walked up to him and asked him to turn off his microphone.  He complied.  I said I didn’t think he liked it here and he replied that is was fine.  I knew what he was saying…and it something he later confirmed. 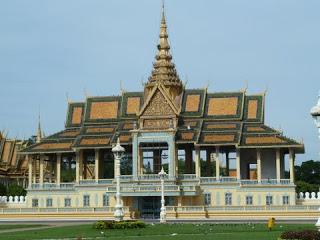 At the Royal Palace in Phnom Phen, Cambodia, just as when visiting Ho Chi Min’s Mausoleum in Hanoi, Vietnam the people that are supposed to be casually walking around are actually listening to be sure the tour guides deliver the required message.  When you travel to places like this and see a number of people “just there” or sitting in a uniform doing nothing they may well be listening.  Fear and intimidation still exists in Cambodia.

While there were many people in our group were very impressed with the Palace and the Silver Pagoda (named so because about 50 years ago the floor was lined with 5,239 silver tiles each weighing about 1.5 kilograms.  (You can only see a few as the tiles are mostly covered with carpets and rugs.)  I, on the other hand, was thinking back to the villages we had just visited and the people who are eking out a living farming a small plot of rice who are paying taxes for this place.

Photos are not permitted inside the buildings at either site.
Phnom Phen is starting to show me the corruption that I had suspected, but had not really seen.  As you quietly talk and listen you find the businesses favored by the government are very successful, but you also see the government cars are the nicest ones, such as Range Rover I saw having a military uniform swinging from a hanger by the rear door.
Afterwards we headed off to the National Museum.  We had a special guide for the tour of this small, but very good, museum of Cambodian history, focusing on the religious aspects of it.  Just as we started it was mentioned that many of the relics were lost or broken during the time of the Khmer Rouge because the museum was left abandoned and, being semi-open, was overtaken by birds and animals.  But what was there was impressively preserved and presented.
Our charming guide spoke with great knowledge and humor of the artifacts and of the Buddhist/Hindu interrelationship.  It was fascinating and well worth the visit.  I was surprised it was such an informative and human experience.
I must note that even though this is supposed to be the rainy season it was very sunny and hot.  I mean really hot.  Like so hot that my daughter had a bit of heat exhaustion.  Be prepared!
After that it was back to the Central Market as part of a tour…and for us a quick visit to top up on some t-shirts and re-visit the food market to see if my first impression could be changed.   There were some interesting things that were not there in my late afternoon visit, but I am still of the “Look but don’t touch” opinion. 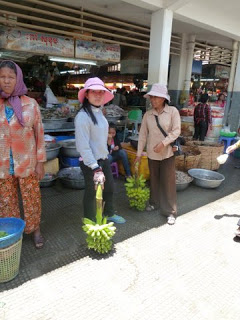 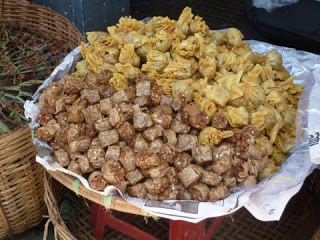 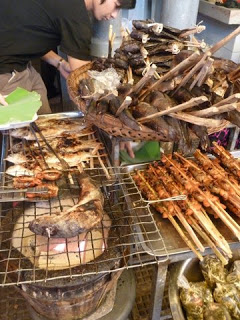 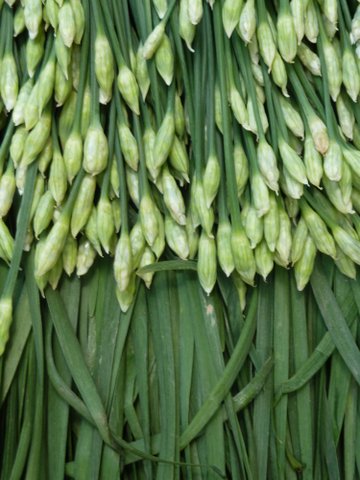 After a short rest and lunch it was time for visiting the Killing Fields and the Khmer Rouge’s Tuol Sleng (or S21) Detention Center.  Due to traffic we apparently did the tour backwards, visiting the Killing Fields first.  I thought it was the better way after reflecting upon it.
Arriving at the Killing Fields you are not met with anything which you would consider well-preserved or of noted monument.  In fact, getting to the site is difficult and poorly marked.  After walking into this non-descript area you are faced with a tall white memorial where you can see, even at a good distance, 9,000 skulls neatly stacked.

As we walked around the relatively small area there are signs about what was here or there; as not much was preserved in this former Chinese cemetery.  (Because Cambodians are fairly superstitious they do not like to be near cemeteries; hence it was a good choice to secret the horrors that were to occur there.)  There are a few areas cordoned off with crude bamboo fencing marking mass graves designated for those who were women or who were decapitated.  There is a Plexiglas box with bones and teeth inside and another with some clothes.

There is also what is referred to as the Killing Tree where the Khmer Rouge would literally beat infants against to kill them. 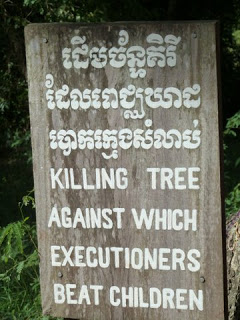 What I found to be obvious, and as was also subtly explained to me,  is that the King and majority of the government (who are former/still Khmer Rouge) wanted the Killing Fields to be destroyed so as to make their existence a distance memory…and then not at all.  What exists is shockingly small and unkempt (compare to the Royal Palace and Silver Pagoda in the morning); noting that every other Killing Field has been removed from existence – save a small memorial marking.