My first night on Windstar’s Star Pride I dined al fresco at Candles (Windstar’s steakhouse) with some old Windstar/Seabourn friends.  The night started with an amazing sunset, then a perfect veal chop, 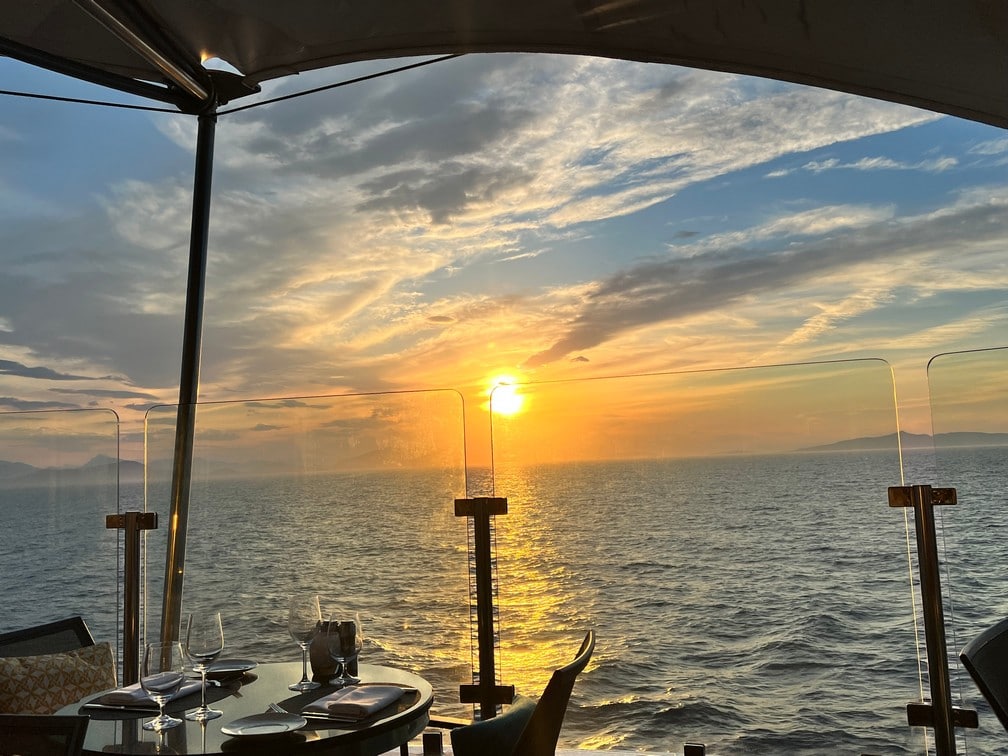 and then three friends reminiscing  in a restaurant that we hadn’t noticed was now empty of all other guests. It was a great evening.

The next morning we arrived at a very early 7:00 AM in Gythion, Greece; a sleepy little fishing village. This was not poor planning on Windstar’s part, but rather some creativity. By arriving so early and departing at 1:00 PM (just before siesta) and combining that with arriving at our next port of Corfu, Greece at 1:00 PM the next day with a late 9:00 PM departure, the Star Pride’s guests are provided with effectively a relaxed experience over two days without truly having a sea day while providing plenty of time to explore each port.

I think it is a good idea for the most part, but as you will read below, selfishly I could have used more time in Corfu!

As I am not really one for ship’s tours and the town’s shops and restaurants wouldn’t open for hours it was a lazy morning for me in Gythion…with a surprise. 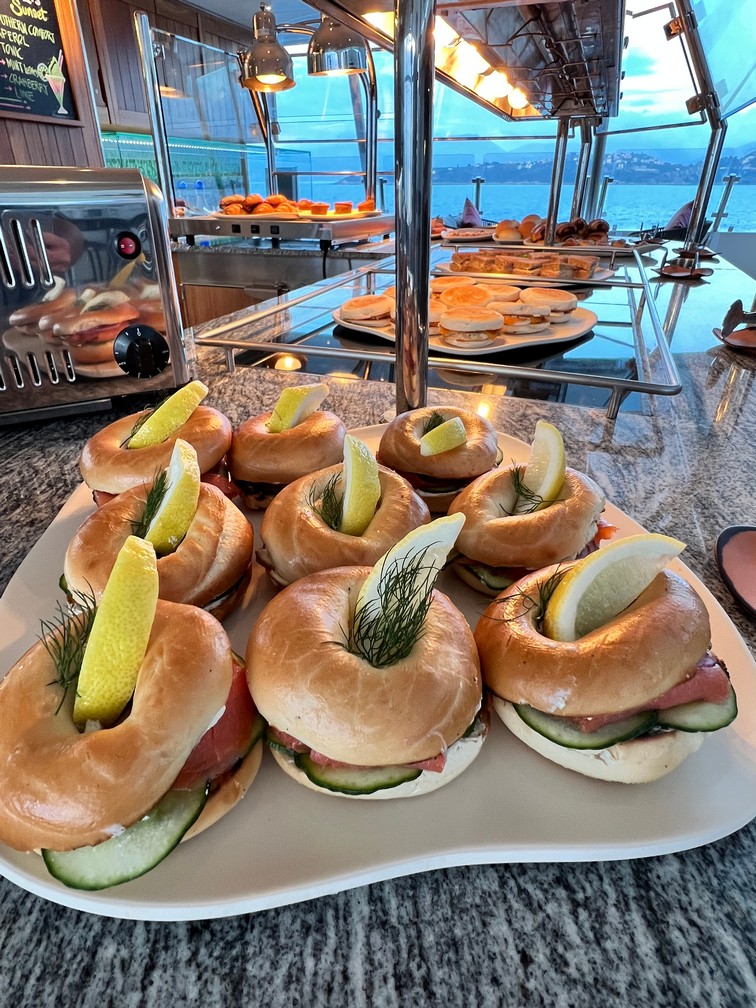 Windstar has created a new breakfast dining venue at the Star Bar and Grill; sort of a quick breakfast spot with bagels and lox, egg and cheese English muffins, sandwiches, pastries and the like. It is very informal and quiet. I think it is a great addition; especially for those that just want something to “Grab and Go” or simply want a quiet place to have a light breakfast at their own pace.  (It is currently offered on the Star Pride and I am sure will be available on the Star Breeze and Star Legend very soon.)

It was then time to wander around Gythion.  I wandered, as I do, up a hill into a residential area.  There were some beautiful views and many flowers, but my “Yes we are in Greece” moments were the old men and women slowing and peacefully climbing up the hill with their small carts behind them carrying the day’s shopping they had just purchased in the village below.  This was colored even more by a Greek Orthodox priest slowly visiting with folks as he descended the hill. 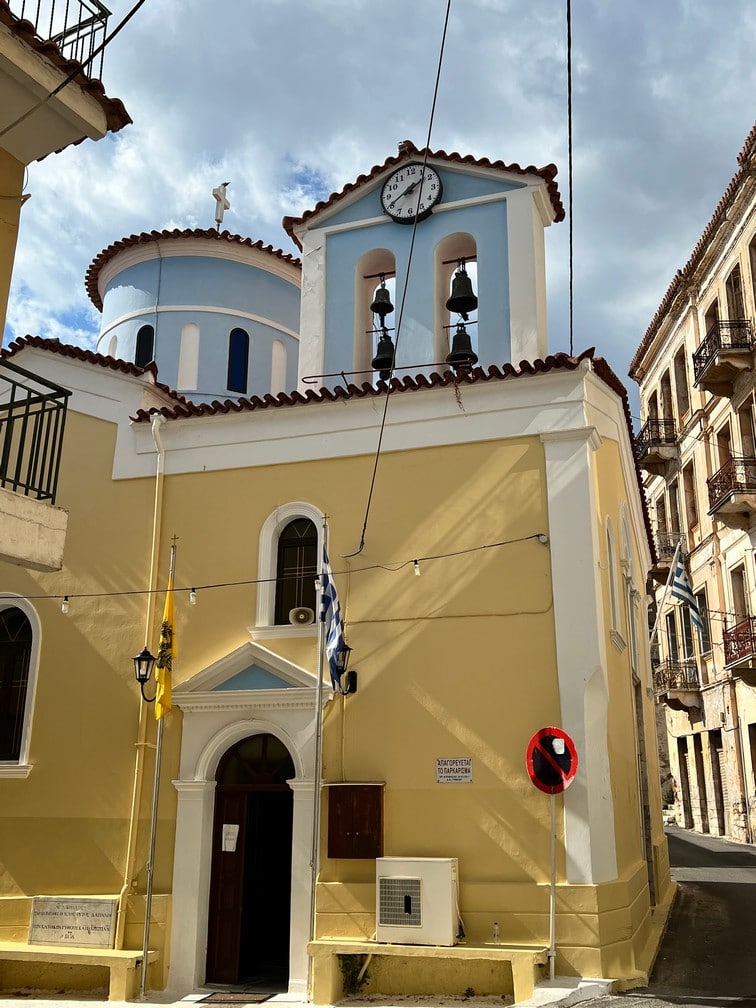 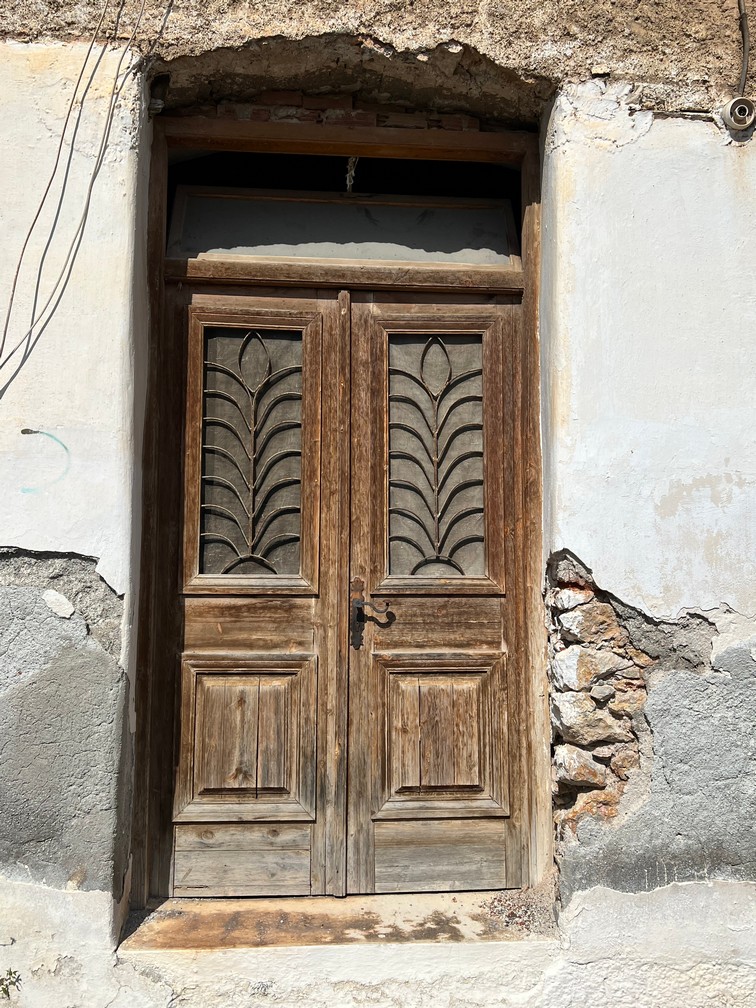 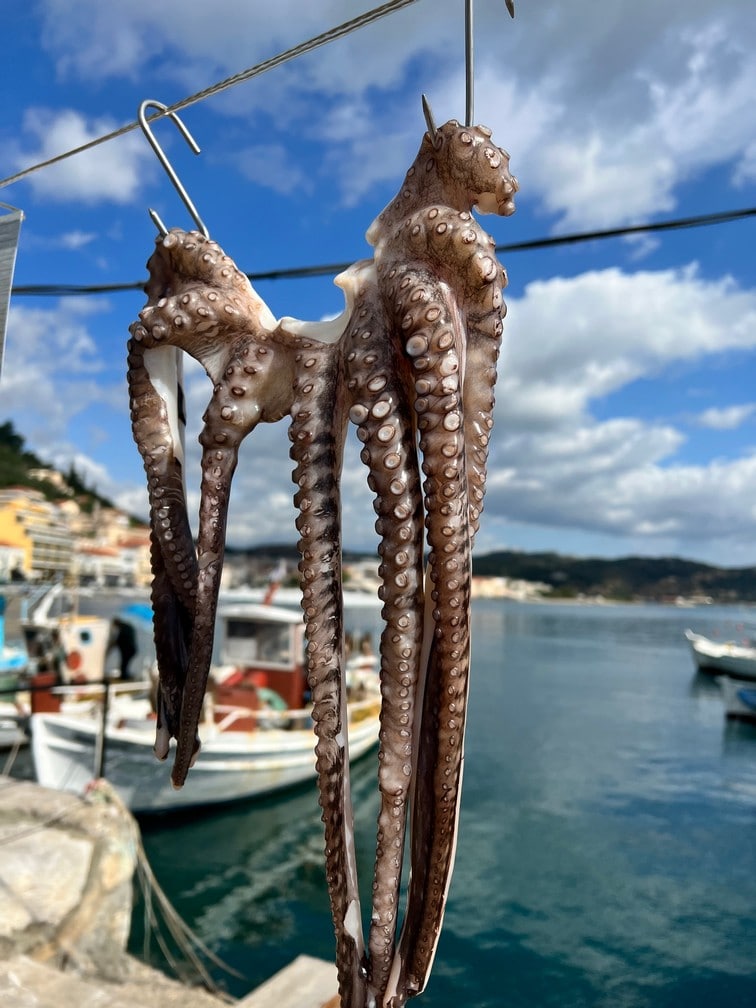 Continuing my long walk along the shoreside there are shops, cafes, and tavernas; most of them still not open.  The only signs of life were locals sitting here and there with their coffee and cigarettes; not rushing the events of the day to come.

No rush. No worries. Just the way it has been and the way it will be.

We departed at 1:00 PM to sail towards our next port, and the one I was most looking forward to (for reasons that will become obvious): Corfu, Greece.  That allowed me time to enjoy “my” hot tub on the bow of the Star Pride, do some work, and just enjoy being at sea. 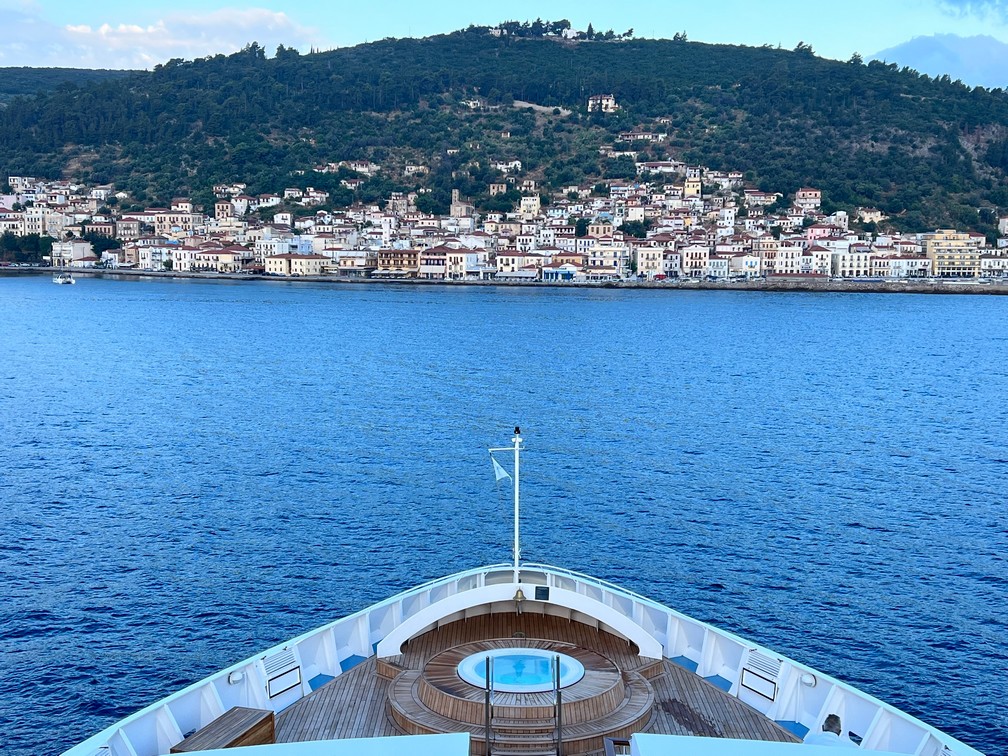 I was surprised that I was formally invited (when does that happen for me on Windstar?) to have dinner with Windstar’s President, Chris Prelog.  While the food was excellent (Windstar focuses on excellent ingredients prepared well rather than focusing on complex presentations) and it was an enjoyable mix of guests, my highlight was Chris being late to the table. Oh, back in the day, when Chris was the Maître De at Seabourn, you had better not be late or he would find you!  We had a good laugh about that! 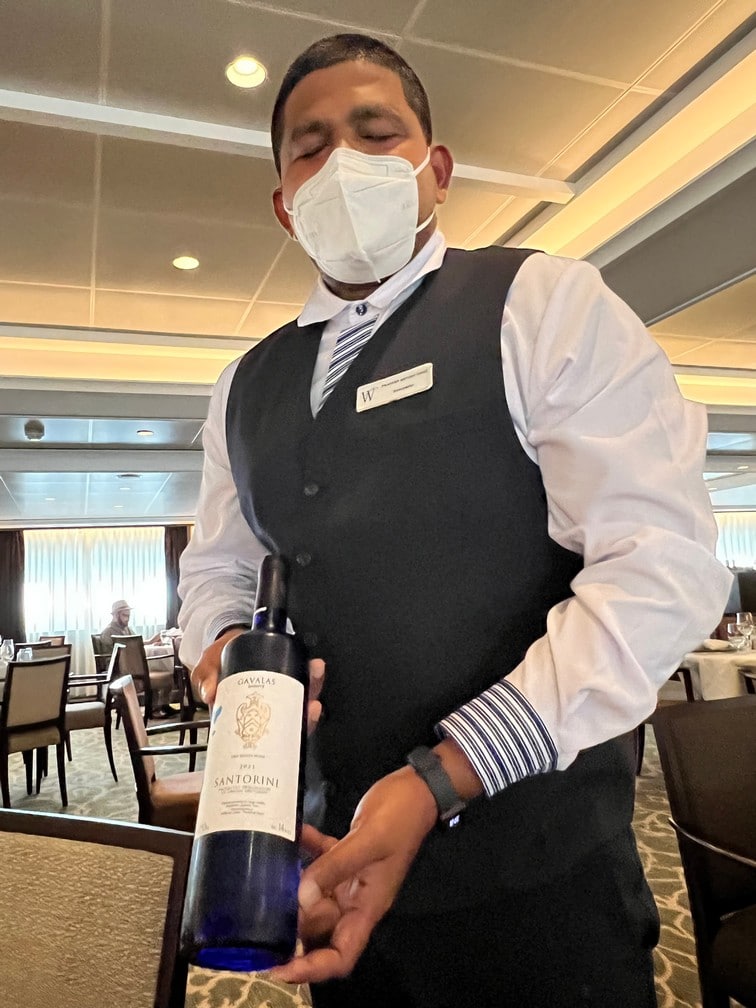 Windstar remained so very concerned about my lost luggage, while at the same time I was settling into not having it until the cruise was over. When I returned to my suite later that evening there were three cards: One giving me $100 to buy essentials in the shop; a bottle of wine; and one letting me know my luggage was scheduled to be delivered the next day in Corfu.  (Nobody said delivery was 100%!) 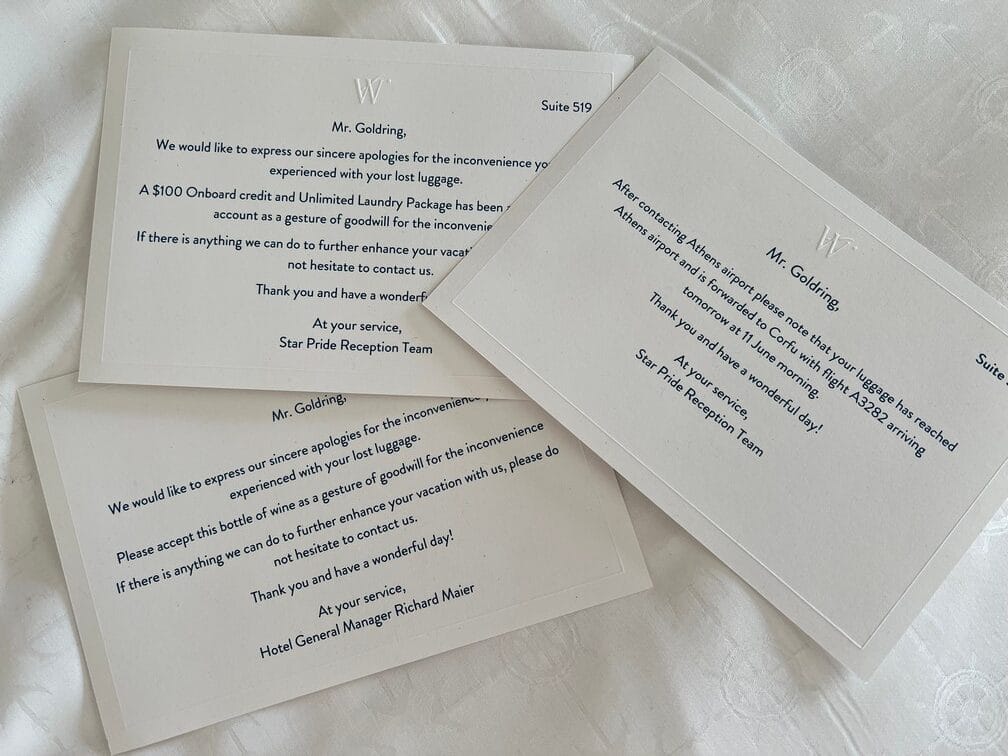 Another nice touch was the delivery of recipes for two of the dishes presented on the Amphora menu in my suite at turndown.  Both dishes are highlights of two James Beard Foundation award-winning chefs.  Just a small nod to Windstar’s association with it. And a nice touch. 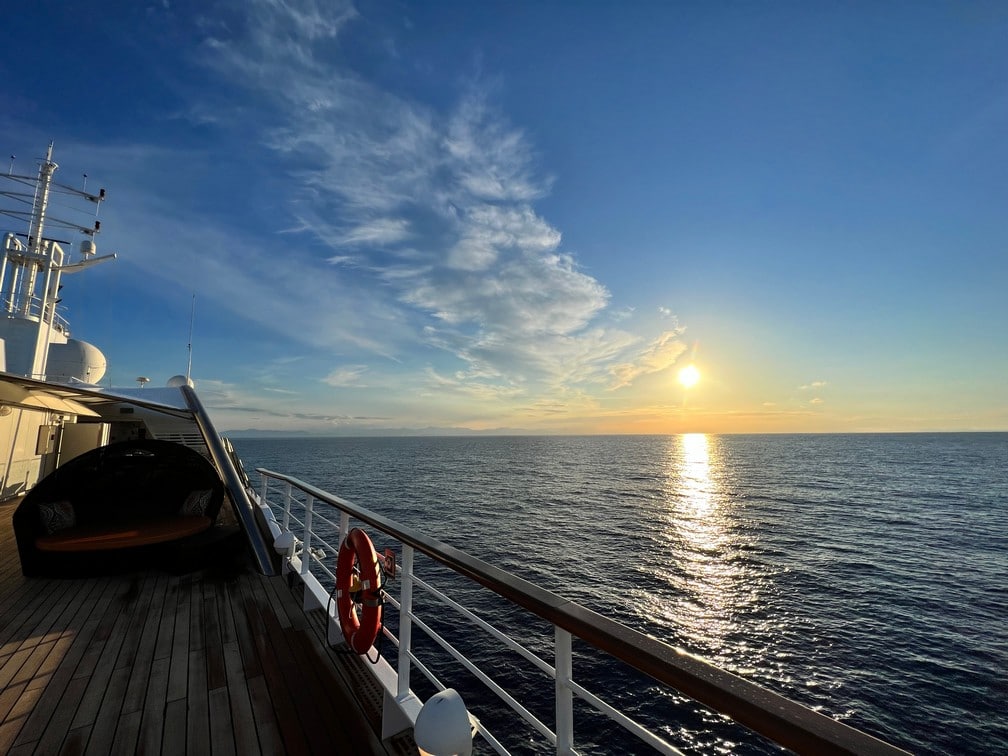 My second full day on the Star Pride had me pacing a bit. We weren’t arriving in Corfu until 1:00 PM and my dear friend that owns Corfu Walking and Food Tours (www.CorfuWalkingTours.com) was arriving at 2:00 PM for a leisurely six or so hours together. I had no idea what Nausica has planned for us and, to be honest, for me it was more about us spending time together; especially since it had been too long since we had seen each other. In fact, it had been almost four years (two if you deduct the Covid years!) and I was wondering if that connection remained. It did! 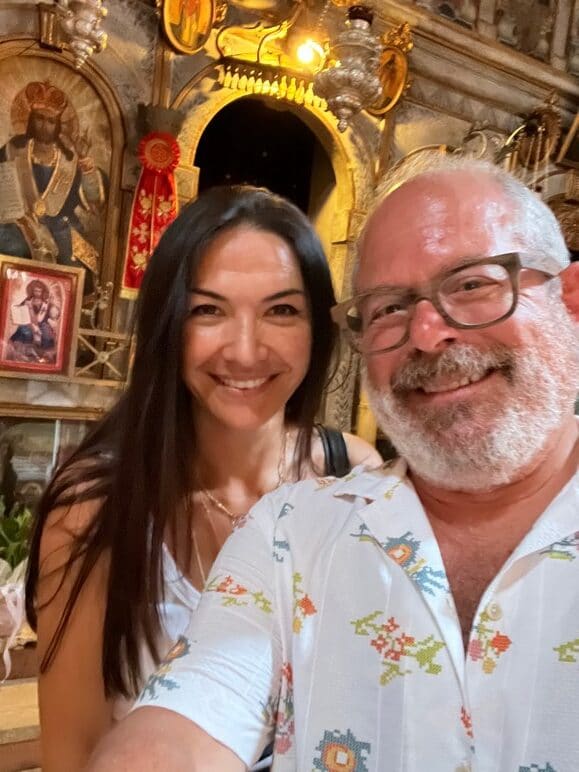 Nausica showed me places that the tourists generally never get to see.  Our first stop was a monastery located in a remote area far up the hills with an incredible view of the ocean.  She said this is where they would send the “naughty” monks for punishment (because it was so remote).  But apparently, it was quite popular to be “naughty” because it was so beautiful there.  I wonder why she picked this place as the first place to deliver me?

As Nausica attempted to shift into “tour guide” mode telling me more detail about the monastery and its church, she teased me that I wasn’t listening. (I wasn’t).  And then she said I needed to take some pictures to show I was just the least bit interested; including the very traditional Corfu three bell tower; representing the holy trinity. (I did.)

Next up was an even more remote place; an abandoned village high up in another area.  Apparently, there was a plague of sorts that caused the population to move out…and they never came back. It was a very interesting combination of abandoned stone buildings in ruin and some new construction interspersed. 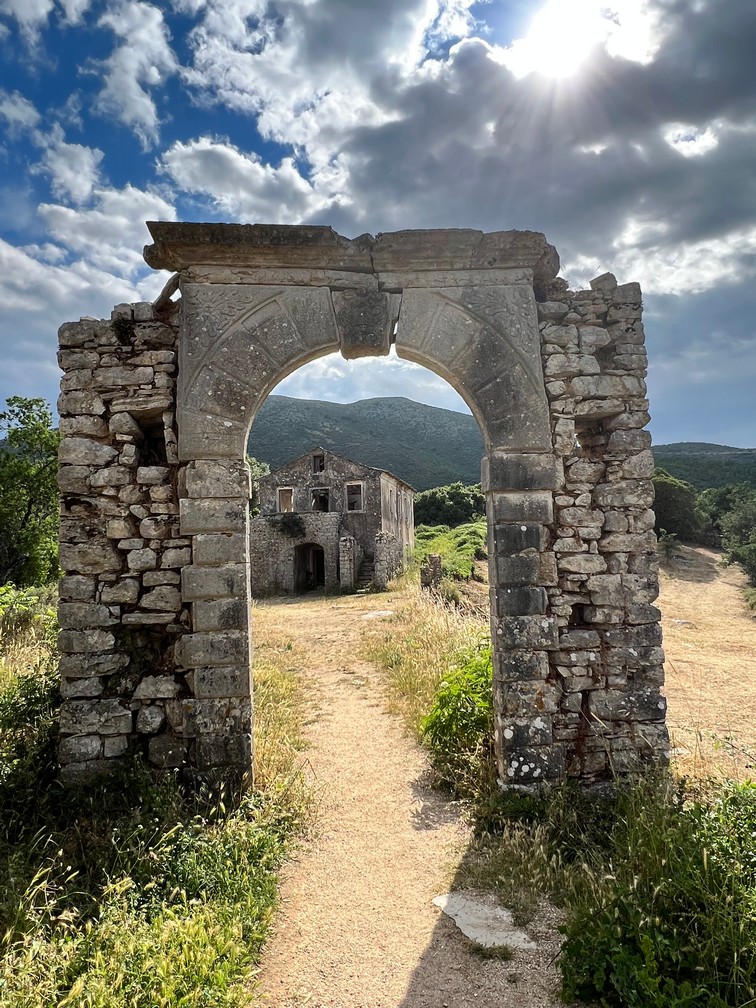 I started thinking, “Maybe I’d buy an old stone house here and fix it up”, but Nausica advised me she is a “city girl”. 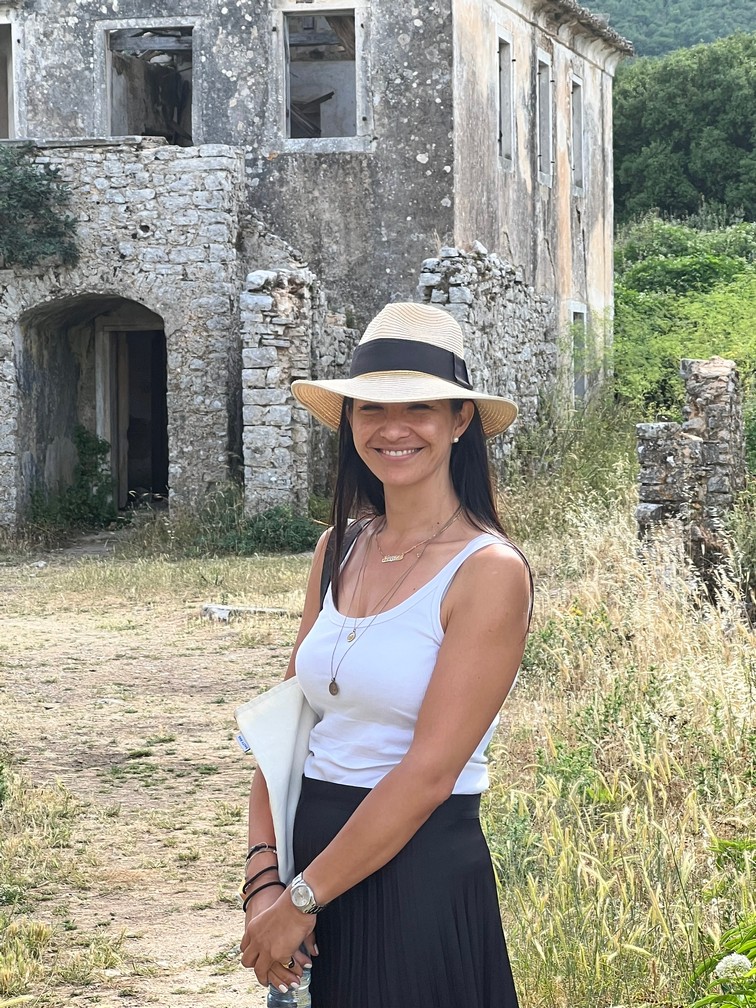 OK, scratch that location, but the concept of buying a place in Corfu is seeming pretty attractive!  (And I did take a photo of the three bell tower without being prompted!) 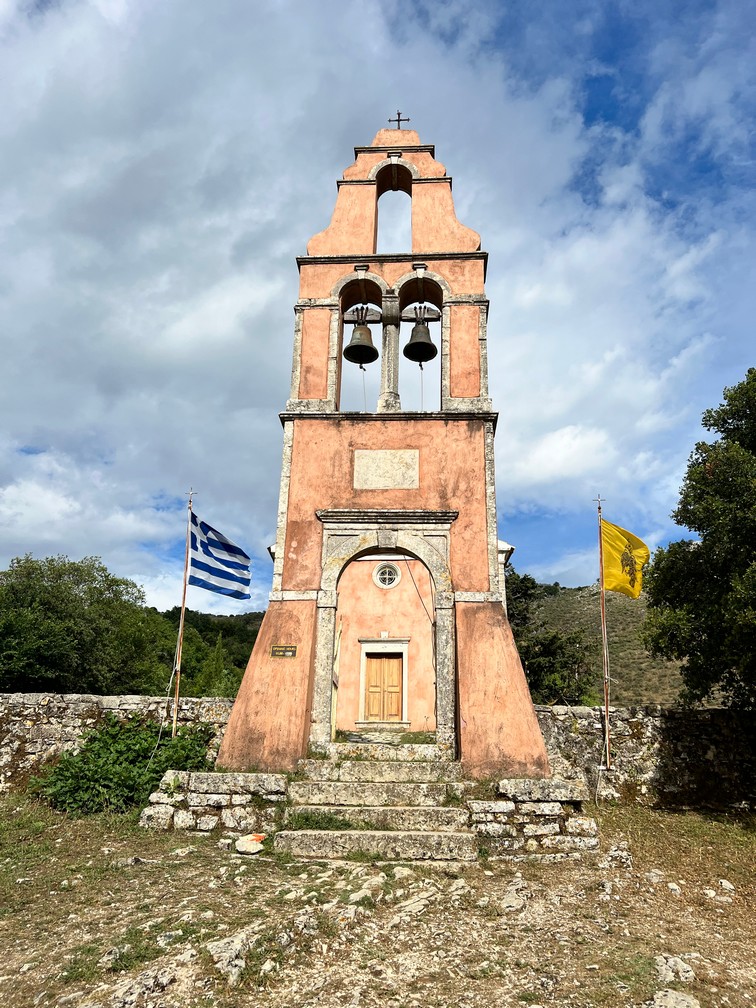 We then had a leisurely drive back to Old Corfu Town – pretty much giving me a view and feel of much more of the island  We settled in and enjoyed a bottle of Assyrtiko wine from Santorini. 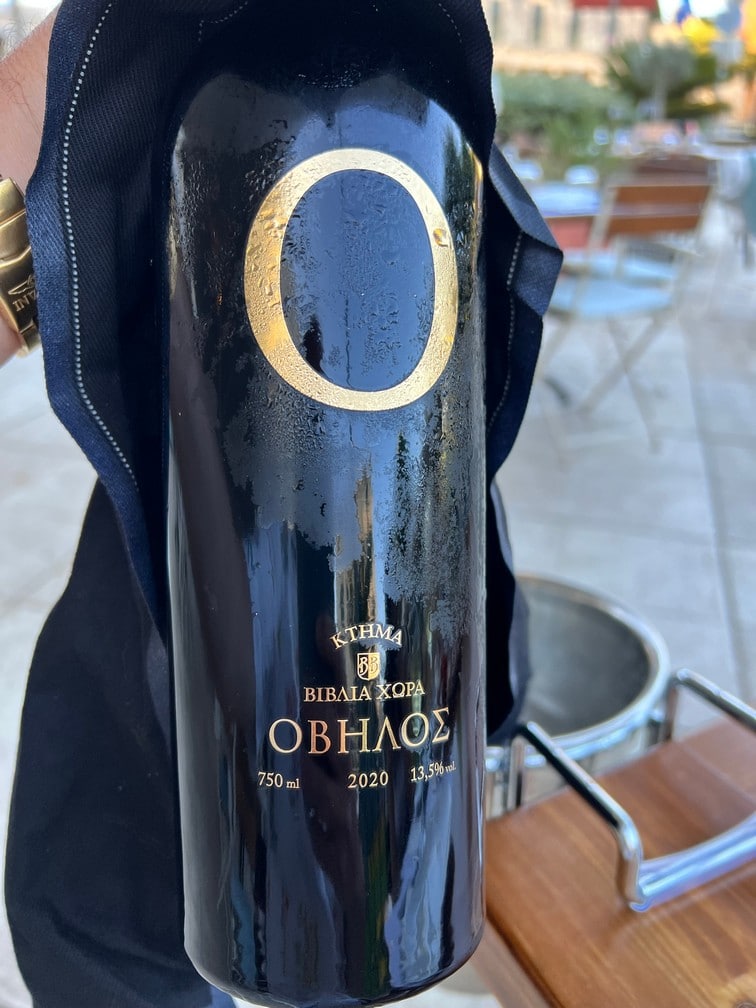 However, we were enjoying our time together so much that we kept pushing the time our day would end in order for me to be on board by the 8:30 PM. deadline. Well…I didn’t quite make it! Ooops!

As our driver was rushing us back to the ship, I received a call, “Mr. Goldring, your luggage has arrived at the ship. When can we expect you to?”

And just to underscore my being tardy, just after I boarded the Captain announced, “We will ESSENTIALLY be departing on time.” Ouch.

Obviously, I did not spend enough time in Corfu. Now, about buying that fixer-upper…