My journey to the Ocean Endeavour was, fortunately, uneventful, but not boring.  Although this expedition ship is, well, “classic”, that is not how I started my journey…I mean life should be balanced, should it not?

When I left Tahoe it was snowing and raining at the same time, as a series of storms that – so far – had dumped almost 20 feet of snow on the mountains. Would my flight from Reno, Nevada to Houston, Texas be on time…would it even be?  I only had a 1 hour 40 minute connection to my flight to Buenos Aires. It left on time and arrived 20 minutes early. Then I was upgraded to Polaris business class on my 10-hour flight and that, too, arrived early…and with my luggage!

My private transfer (do not use the taxis or Ubers as there are too many instances of stolen luggage or worse) arrived at the Alvear Palace Hotel, which is a wonderful property in a great location, at about 11:00 AM.  My room was ready for me. Here is a bit of a travel tip: Use your American Express Platinum Card…and, yes, it is worth the $695 annual fee. (I remember when it was $300!)  I used my annual $200 statement credit when I prepaid my room via Amex Travel. That also provided me with an early check-in, 4:00 PM checkout, $100 Food & Beverage Credit, full buffet Breakfast, and an upgrade. The net cost of the room was about $150.  Such a deal…and it already paid off about half of the annual fee!!

After a shower and a nap, it was off to Fevor, for another offal-filled lunch; only a five-minute walk from the hotel. Yes, I was there last month, but it is so good, so Argentinian (I think I was the only American there), and the menu just isn’t available in many places in the U.S.

Back to the hotel for rest and then some work.  But I had my $100 F&B Credit to spend so it was then downstairs to the beautiful Alvear Bar for a couple of very generous gin and tonics before heading to the Alvear Grill, located in the basement of the hotel, for a dinner I did not need, but still craved.

The setting is very modern and stark, juxtaposed with the large barbeque grills visible though floor-to-ceiling glass walls. I skipped the starters and went right to the Bone-In Ribeye with Truffle Mash Potatoes followed by a decadent dessert of a rich dark chocolate sauce hidden inside a pastry with cinnamon ice cream. 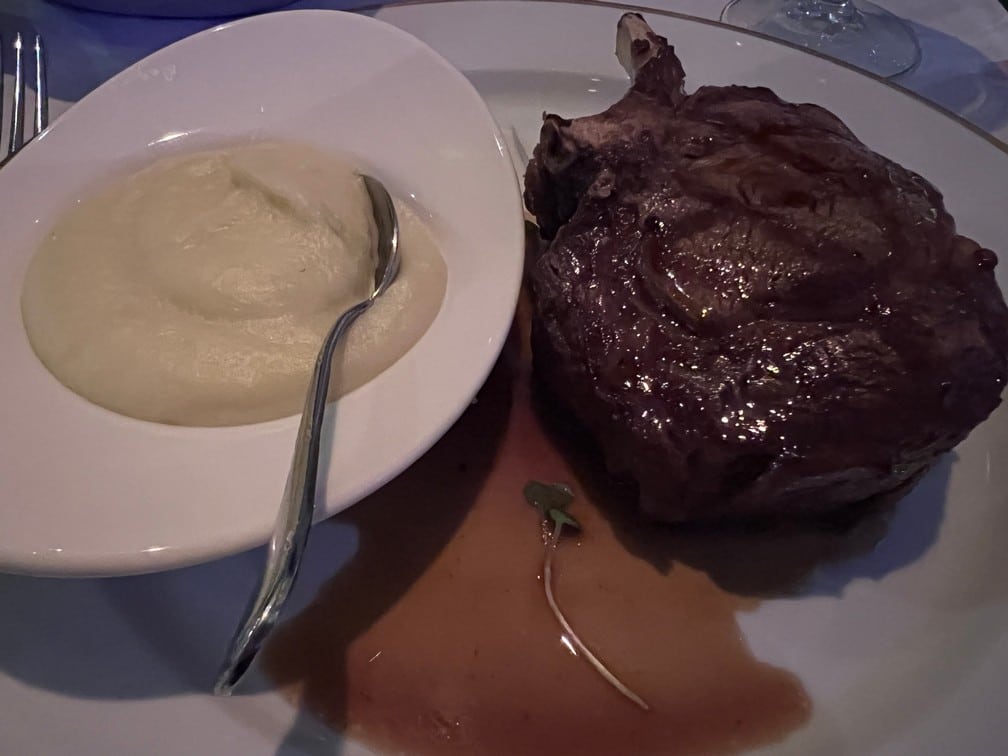 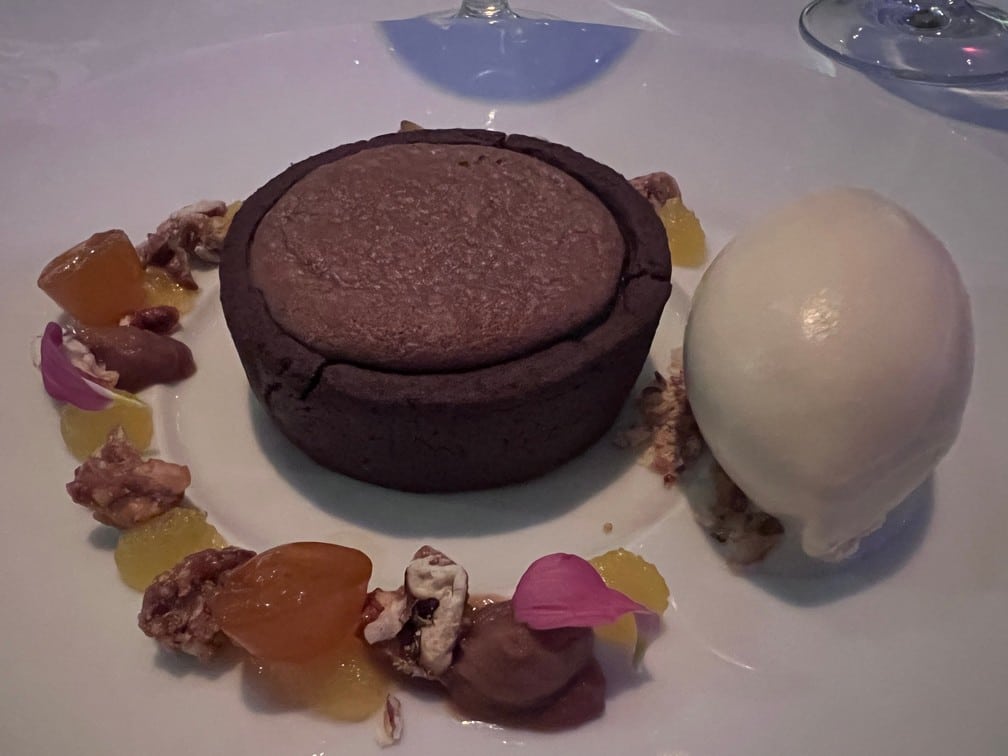 Note: The two gin and tonics, two glasses of a nice Malbec, the ribeye and dessert came out to $102; just $2 over my $100 Amex food and beverage credit.  Argentina is a good deal for U.S. travelers.

My flight to Ushuaia (not through Chimu/Intrepid) wasn’t until 3:35 PM, so I had a leisurely light breakfast (yes, I was still full from the day before), did some work and then headed to terrible domestic airport (AEP) – again with a private transfer – taking only 15 minutes.  Checking in was easy, but I was told that while international flights (and my previous charter flights) allow for 23 kg (50 pounds) of luggage, on domestic flights it is only 15 kg so there would be an excess baggage charge (unless I just flew in on a Sky Team flight from the US).  I was told it would be about 6,000 pesos ($22) so I said I’d just pay it. But when I went to the counter to do so it was only $5.02. I’m so glad I didn’t repack my luggage by filling my backpack and checking it as a second piece of luggage (for which there would be no charge.  Huh?)!

As I sat at an airport bar in another kinda-sorta Hard Rock Café (and recalling a person from my last expedition having his backpack stolen at EZE), a couple sat down next to me and insisted on talking to me. Trying to be polite, I determined that these were yet more of the “box tickers” I have been running into more and more. “We are flying to Ushuaia for a three-day sailing to, and then flying back from, Antarctica, so we can say we’ve been to all seven continents.” Ugh. I said, “Well, you enjoy that. Antarctica is not about ticking off a box.”

My Aerolinas Argentinas flight, despite the four schedule changes, was on time and actually arrived 30 minutes early…something unheard of with that airline.  And, despite my having my luggage held until I paid my $5.02, it made it on the plane with me!

It was now time for my Chimu Adventures/Intrepid Travel expedition to finally start!

There were seven people for a beautiful 50-passenger bus being transferred to two hotels: Wyndham Garden and Las Hayas Hotel; both far up the mountain near or in a nature reserve.  While the hotel site says it is only 2.5 kilometres from the city, that isn’t exactly true…unless you are talking about the city limits. As it took over an hour from my flight landing to getting to the hotel, it would be no earlier than 8:30 PM for me to catch a shuttle or taxi into downtown Ushuaia, and it being almost 30 minutes each way, my plans for the evening changed to just hanging out at the hotel.

As one of the last people to check in to this fully booked hotel, my room did not have the spectacular view of Ushuaia that I had hoped for. It was the last room in the building with a view of some trees, but mostly a couple of sheds. The room’s décor is what I would call “1970’s grandmother” and was very basic, but clean. (Bring adapters for Argentina and then hunt for an electrical outlet that you can use.)

I headed to the bar for a glass of wine and a bite to eat. (There is a restaurant, but I wasn’t really that hungry.) As I said, the hotel was full, so there was just space at the small bar…with simple, but decidedly more modern, decor. Through the frenetic pace of the staff trying to address the rather aggressive requests of the American and Australian patrons, there was a kindness that started to show through.

As things settled down, I decided to order empanadas and a charcuterie board to pick at.  Both were very good and the local Malbec was OK.  I had a nice chat with the bartender.

As we would not head to the Ocean Endeavour until 3:30 PM, I had a leisurely morning (after dropping my bags in the lobby no later 8:30 AM) with a nice included buffet breakfast and did some work. I had a short walk about the property, but as it is a gray, cloudy, day in Ushuaia, I wasn’t too inspired to head deeper into the forest.

After dropping my luggage off at 8:00 AM I had a light breakfast and then did some work. But with it only being 9:30 AM on a cloudy day, I wasn’t exactly sure what I could do as Ushuaia wasn’t yet open and I still had 6.5 hours to kill…and had to checkout by 11:00 AM.  I decided to take as wander on one of the trails. But shortly after I started I came upon two older English women who were clearly fearful of falling down the steep slope. I offered them assistance and they offered me their company for a walk into town. That pleasantly killed some time, but I still had so much time left. 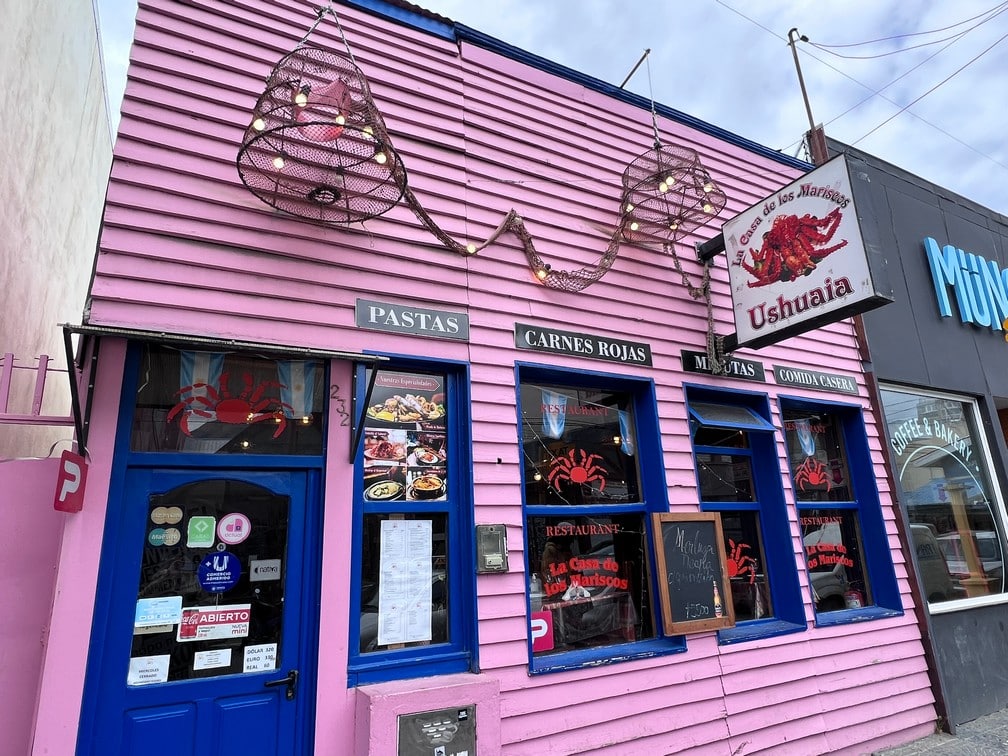 While we were strolling through town I came upon a funky, pink, restaurant with tacky fish nets hanging off the building. Normally, one would run from such a place, but I found it fascinating. I stepped inside to ask when they would open and the server was incredibly nice and said 12:00 PM. It was 11:50 AM, so I kinda shook my head and figured I would wander for 10 minutes and return.

Looking in a storefront I saw what has to be the ultimate in ridiculous souvenirs; so much so when I ask the assistant for it, she started laughing…though I am not certain it was not at me!  Even though I have a “no souvenir” policy, I had to violate it for this gem! 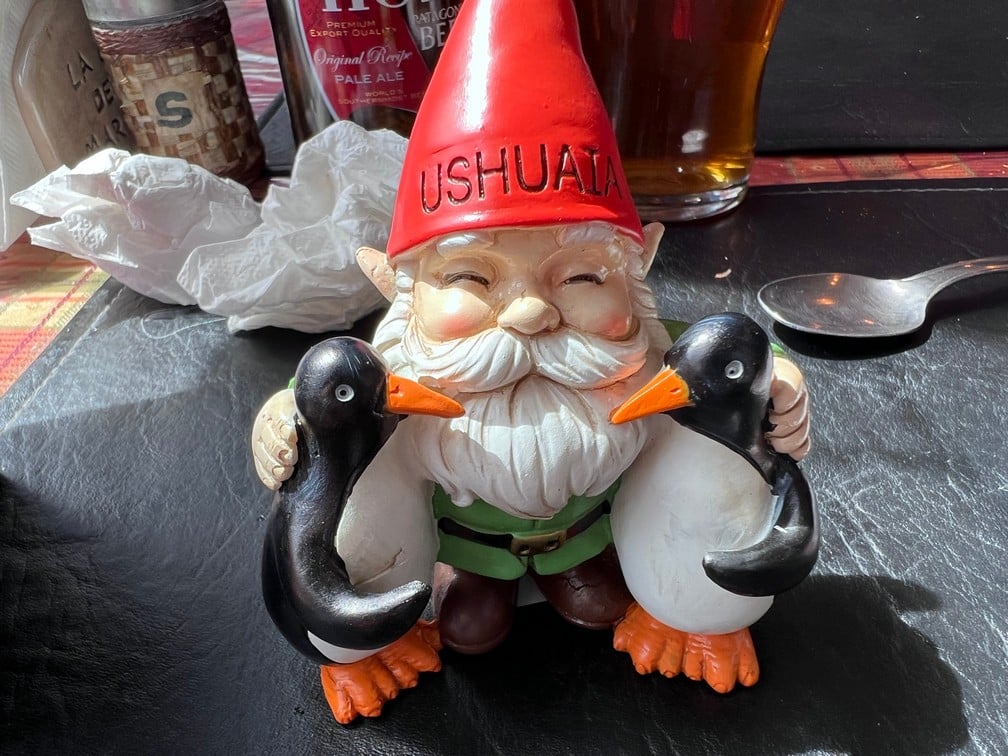 After my well-spent 10 minutes I returned to La Casa de los Mariseos, and boy what a great decision!  I started with a langoustine empanada, followed by a mixed seafood platter (King crab, scallops, mussels two ways, and prawns),  an amazing King crab and Octopus stew and, finishing things up, berry ice cream with dark chocolate and dulce de leche.

After lunch, with yet more time to kill, I wandered along the waterfront near where the Intrepid pickup point was. There was a small group of younger, what I perceived to be, well “intrepid travelers” from Austria, Poland, and The Netherlands, who were friendly and drew me into their conversation, with enjoyable banter flying this way and that.

Eventually, a line formed, and – remembering we were still in a parking lot – we were handed our room key cards.  A few minutes later we were taken in small groups by bus to the ship.  Before we boarded there was a quick temperature check on the pier. Upon boarding, I handed over my passport and everyone is enthusiastically greeted by the full expedition team.

I was then escorted to my stateroom. I was thankful for the escort because the ship is definitely a bit of a maze with a number of “You can’t get there from here” or “You can get there, but there is a secret staircase”, etc. (Once gotten used to it isn’t that difficult!)

I am staying in a Category 8 stateroom, upgraded from a Category 6, and I personally am very thankful for that. While Category 6 has two rooms (some with two bathrooms), each room is quite small; one holds two twin beds and the other a sofa and wall unit with television. The downside for me is that they have two portholes, which would be a bit claustrophobic for me. (And then there is the “maze” thing!)

My stateroom is extremely spacious with a queen size bed, a large desk with drawers, and sufficient closet space and drawers. There are two windows above the bed so there is plenty of light, but it overlooks an outside deck – that doesn’t seem to be used much – so privacy could be (but I don’t think will be) an issue. 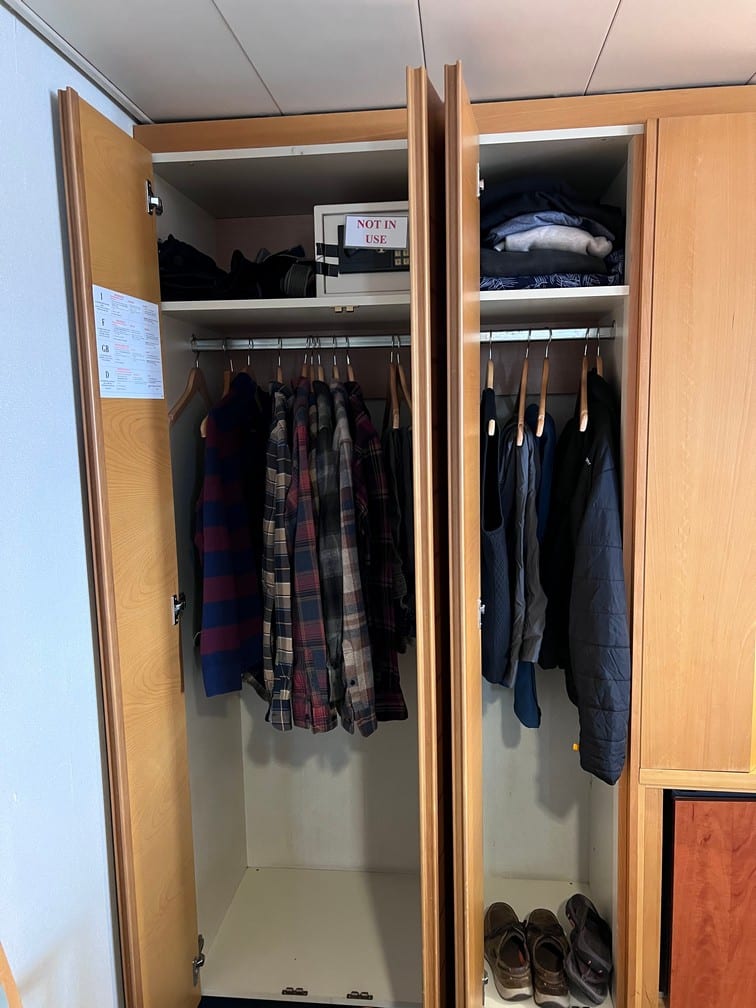 The bathroom is as expected: Compact and no frills, but again clean and with a new showerhead.  There are only 220v electrical outlets, so be sure to bring adapters (most all computers, chargers, etc. work just fine with it).  If you need a converter to 110v bring one. 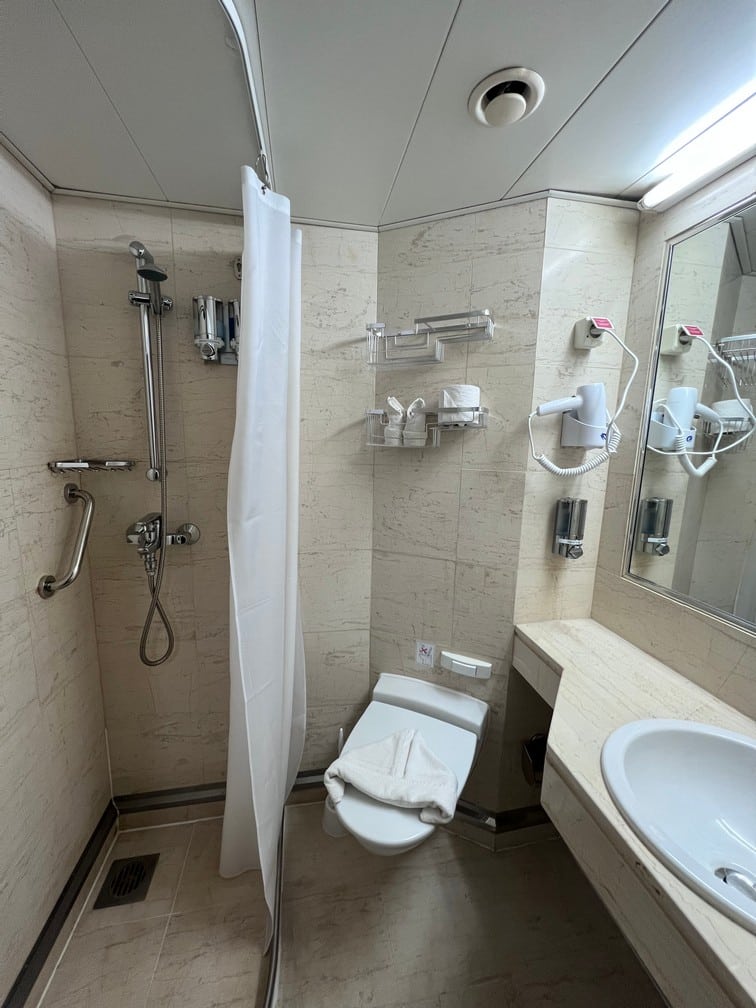 The television is tiny and has about 8 channels, one being the daily program. (No paper copies are provided). There are two what I call David Attenborough channels and the others have movies – but I have no idea when they start or what their titles are!  Very “old school”, so you won’t get your news fix or lie in bed watching a plethora of new movies.

While I will go into more detail later, Ocean Endeavor is a well-used ship, but she appears to be well-maintained and, though decades of use. make her a bit worn, she is clean. More importantly, the staff and expedition team seem happy and engaged.

In short, there is a relaxed but efficient approach with a very good vibe. Things feel like this is going to be a great expedition.