Night and Day.  That is the best way I can describe the difference between my prior Silversea experiences and this one…and it is only Day One.  First impressions matter and my impression is Silversea is nailing it!  Seriously, how could this be the same cruise line that I was on in 2013 (Silver Shadow) and 2016 (Silver Discoverer) that had so many misses?  It is so different that my original idea of comparing how Silversea has improved just seems so, well, irrelevant. So with that… 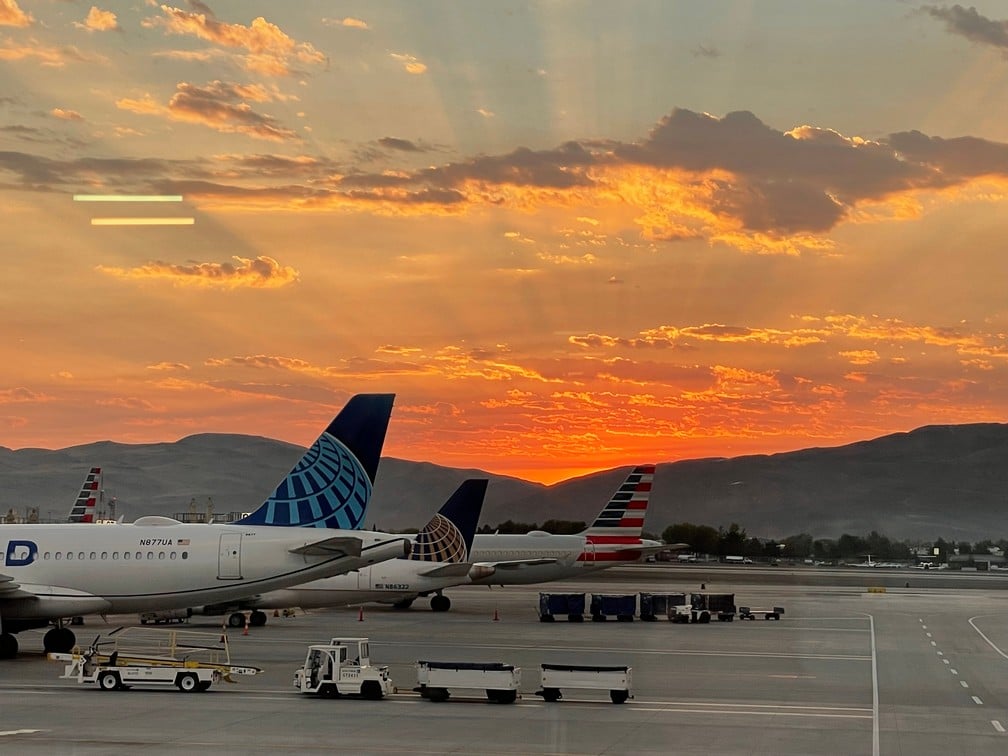 My 8:00 AM two-hour flight on Alaska Air boarded early, departed early, and arrived even earlier and with my luggage. What I new and wonderful experience!  Because I had the time I and American Express Platinum Card pays the annual dues, I took the opportunity while in the Seattle airport to sign up for Clear.  It is a service that uses biometrics (eyes and fingerprints) to whisk you through security at many airports. (It is not available in Reno, but I figured why not use it when traveling through other airports.)   When it is combined with TSA Pre-Check things are supposed to be quick and simple bypassing crowded lines.  We shall see.

My biggest challenge of the day was finding where the Uber pickup location was, but once I figured it out, it was, well, smooth sailing. I arrived at Pier 66, dropped my bags off, and heading out to nearby Pike Place Market for a wander and some sort of culinary experience.  Even at 11:00 AM the area was crowded with tourists, which was great to see.  There were no issues with “Covid Courtesy” as everyone was wearing their masks since quarters were close.  (I did eventually realize that my mask said “Seabourn” on one side, so I made sure to change it to something more appropriate before I boarded Silversea’s Silver Muse.) 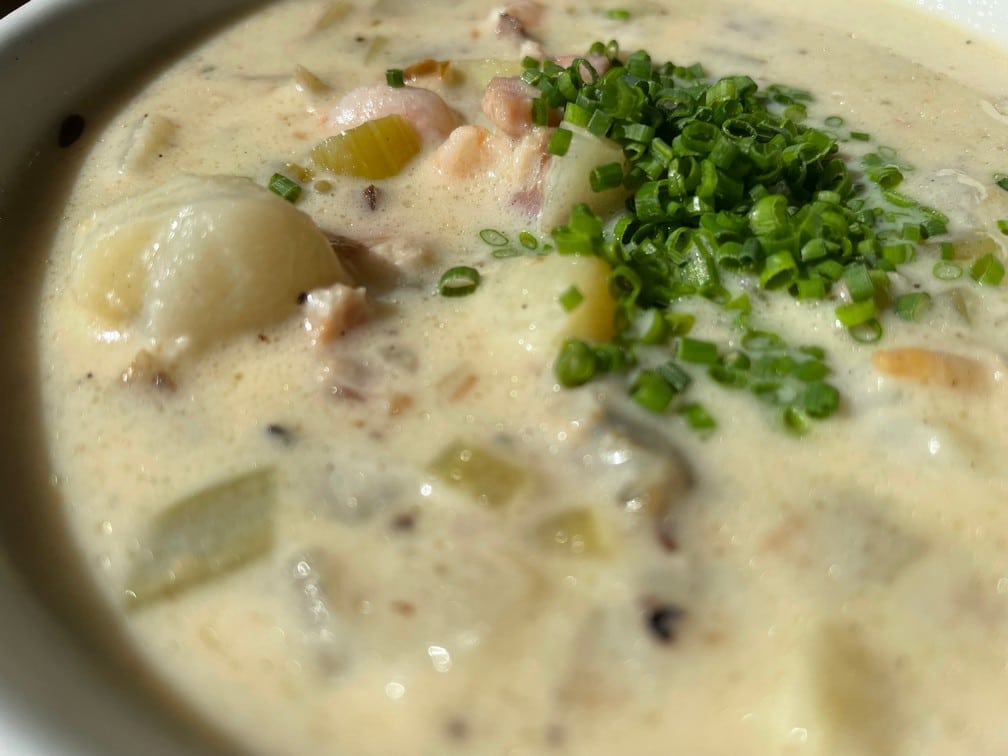 I decided that I would return to Matt’s in the Market for lunch. I knew the food and view would be solid, but I think the reason was actually more personal.  I wanted the feeling I have associated with Seattle.  To explain, my first time at Matt’s was at the invitation of John Delaney, then the Senior Vice President of Seabourn. It was at a time when I was becoming increasingly frustrated with the infusion of a “corporate mentality” at Seabourn and John was making a great effort to have Seabourn return to the former more “personal” approach. After John left Seabourn to head Windstar Cruises, Chris Austin because the Vice President of Sales and we also had one of those great and fun Seattle meals (at another restaurant), but he too left Seabourn to head sales at the new Explora Journeys.

And here I was, back at Matt’s…alone…and quietly reminiscing or, possibly, feeling a bit of “time to turn the page”.  But, as I was leaving Aimee Price, the former (seeing a trend here?) head of North American Sales for Seabourn, and who also just departed Seabourn to work for Explora Journeys, came running up to me.  In all of her time at Seabourn we had never met in person. (While much of that was due to the pandemic, the diminished in-person contact from previous iterations of Seabourn sales, has been bothersome.)  Aimee invited me over and we chatted with another travel agent with who she was having lunch (and who would be on the Silver Muse with me.) It was good to finally meet Aimee in person!  Did I just turn the page? Good question and I’m glad I asked it!

After lunch I walked back to the cruise terminal and went through the fairly seamless process of being tested for Covid before I would be allowed to board. (As I had a PCR test done two days before I left I had none of the trepidation some others had – which I heard as whispers while waiting.)  The system was not quite as polished as Seabourn’s, but I was still on the ship within 30 minutes of arrival at the terminal.

I was welcomed onboard with a cold towel and an explanation that the suites were ready and the dining venues that were open for lunch. No escort to my suite; not that I needed one.  But when I arrived my butler and room steward were waiting to escort me the final ten feet. I was given a tour of my suite by my butler. He asked if I had any preferences for spirits, beverages, or anything else.  I asked if a plate of cut fruit could be delivered to my suite every day. I was told the best thing to do was to call in-suite dining every day. Ouch!  Wrong answer! The little things matter.  But it was but a little thing, so I kept it in perspective.

After declining my butler’s offer to unpack my luggage, I used the opportunity to learn a bit more about my Silver Suite and all its nooks and crannies; and there are a lot of them. The amount of storage and hanging space is amazing and extremely well organized. More than enough for two clothes horses on an extended voyage. 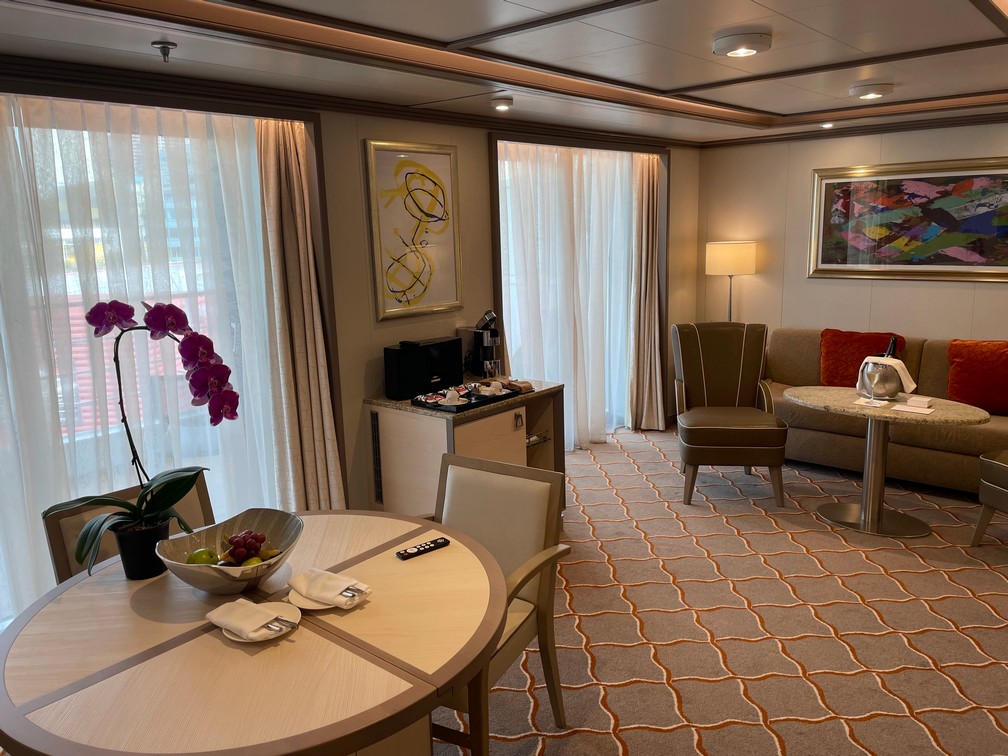 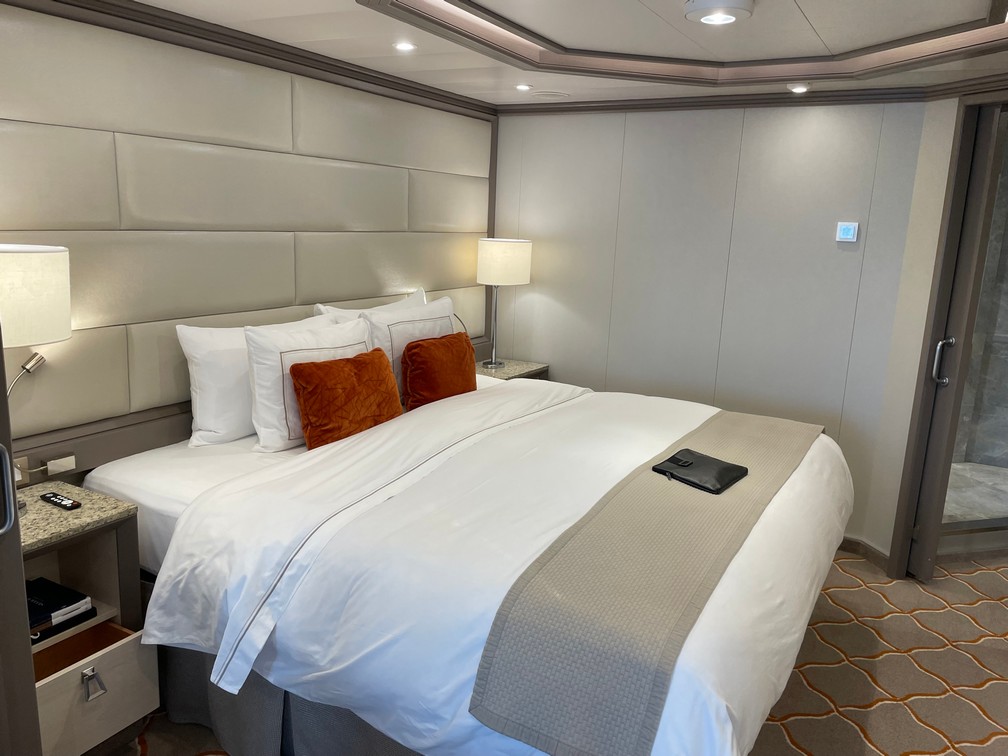 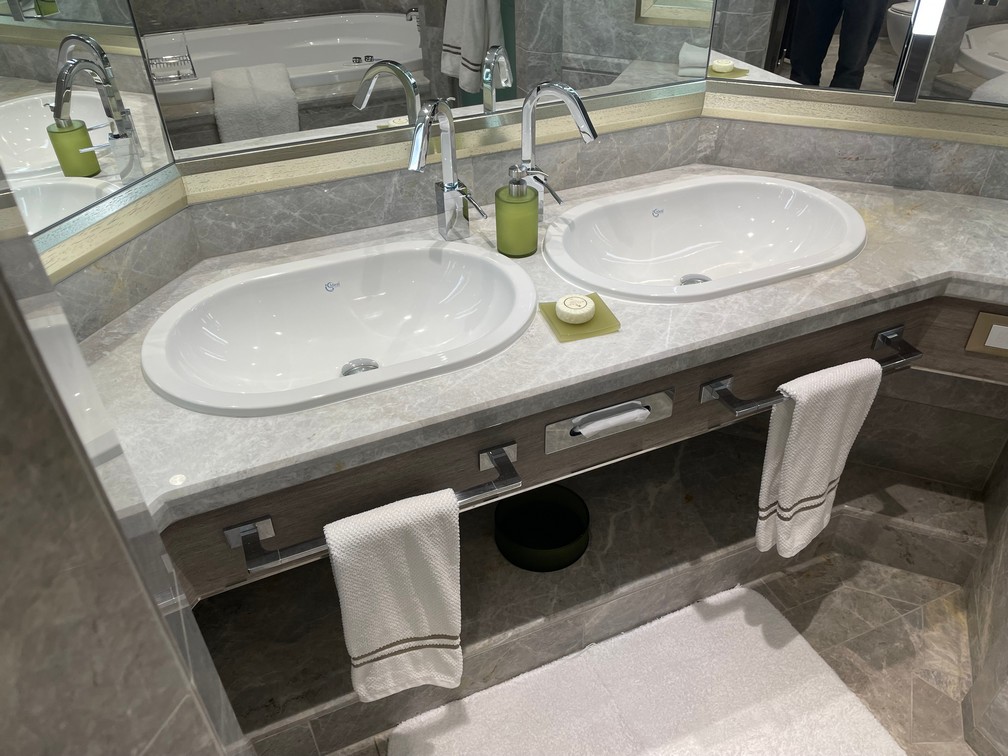 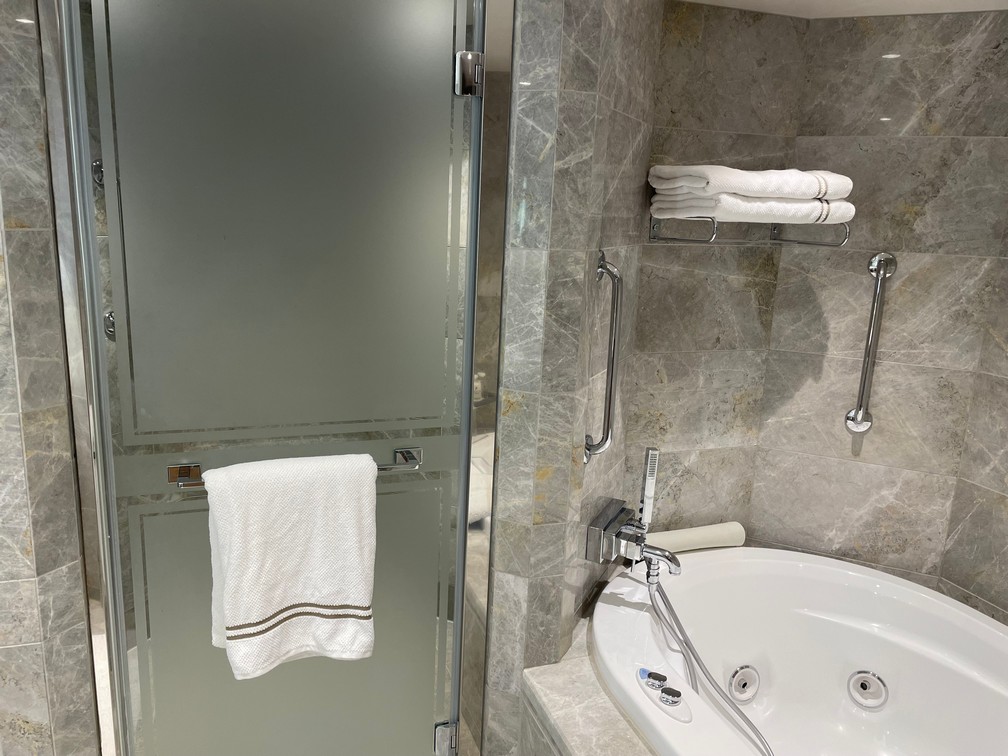 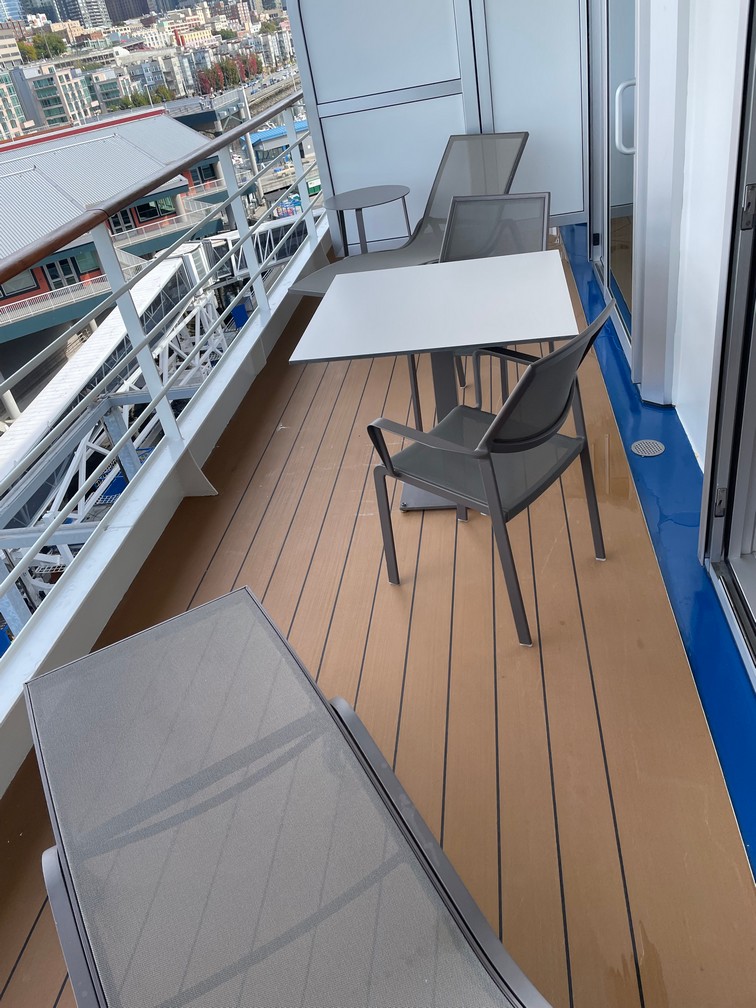 Speaking of space, the Silver Suite is quite spacious in pretty much all respects. And the bathroom, while it has a bit of a quirky design, gives you plenty of room; especially in the huge rainfall shower and the toilet room. There are three misses; one being an observation and the other two worthy of note:

1.     About 50 square feet is lost with a long narrow hallway between the front door and the living space.

2.     When you lie in bed, even with the huge amount of glass, you can’t see anything outside other than the balcony divider because the wall next to the bed extends too far (it houses the pocket door that closes off the bedroom).

Also note that there is a pod-using espresso maker, but not one that can make coffee. Definitely a nod to the Italian heritage of Silversea. Romantic or disappointing, dependent on your perspective.  And I am not too keen on where the coffee/beverage bar is located: In between the two glass doors to the balcony. I don’t think it should be a centerpiece of my view out. Not a deal-breaker by any means, but more of an observation.

The television system is very interactive, and it works across a web-based My Cruise platform where everything you might possibly want to know from shore excursions to events coming up shortly are at your fingertips. It takes a bit to get comfortable with the system, but once you do it works well.

And that is where I discovered that my previously “confirmed” dining times as the reservations-required restaurants (Kaiseki, La Terrazza, Silver Note, and La Dame) were all changed to a very early for me 7:00 PM.  I don’t know why this happened (seeking to shuffle a single diner to open up later times for larger parties or just a flaw that happened due to the entire Silversea computer system having just recovered from a cyber-attack, etc.), but it was literally a two-minute visit to Reception resulted in all of my dining times moved to 8:30 PM.

Settled in, it was time to wander the ship. She is beautiful with lots of lighter brown wood with a hint of grey everywhere and thick subtle carpet underfoot; consistent with the tones of my Silver Suite.  The other thing I noted was lots…and I mean lots…of smiling-faced crew sincerely eager to engage everyone and to help make each venue welcoming.

The style of Silver Muse is distinctly different than Seabourn and Regent (I can’t help but make comparisons).  I guess the best way to describe it is more “classic” cruise ship versus Seabourn’s more modern/break a few rules design and Regent’s curious combination of over-the-top gaudiness/corner-cutting approach. The Silver Muse exudes a classy peacefulness probably most appreciated by the older generations. (Say it with me, “OK Boomer!).

Two areas that I wish were physically a little less large cruiseshipy are The Grill/Bar on the pool deck and Spaccanapoli (the alfresco pizzeria) one deck higher. More on that in a later article.

Consistent with the prototypical cruise ship approach, there was an introduction held on the pool deck where each member of the entertainment team was introduced from Cruise Director to singers.  While doing so, a variety of offerings while cruising was mentioned…right down to Bingo. Yup. Bingo. To me not exactly luxury, but everyone has their own definition of luxury and, to be sure, the fact that bingo exists on the ship isn’t going to interfere with mine.  (I also note that consistent with that approach, there are announcements giving the day’s events broadcast everywhere. Not as much as on a mass-market line, but not the “no announcement” policy of Seabourn.)

As a later diner and still being full from my lunch, I was in no hurry to figure out where I wanted to dine. So when I heard a wonderful guitarist as I was wandering past Silver Note, I stepped in and asked if I could sit at the bar since it is a reservations-only dining venue. And that is where I stayed.  After a couple of drinks having a wonderful chat with the bartender, who has been with Silversea for twenty-five years, I asked if I could see a menu. It was delivered with an explanation that dining at the bar is not permitted. (OK, I wasn’t asking to, but since you mentioned it…)  The staff made some recommendations and advised that contrary to the idea that these were tapas, they were actually fairly large portions. But I saw three things that caught my eye: Lobster, Octopus, and Duck. Next thing ya know: There they were all on one beautiful platter…and served to me at the bar.

I do not expect this would happen if the Silver Muse was sailing at near capacity.  With only 247 guests (and 404 crew) this usually booked-out venue was literally empty other than me and a couple of people that briefly stopped in.

And that led me to look at the wine list. It is both impressive in the selection of wonderful international (non-California-centric) wines at eye-popping prices. When I say eye-popping it is because the prices were so reasonable; as in significantly below what I could purchase the wines for at home…like it used to be on cruise ships! I settled on a 2016 Vincent Girardin Corton Charlemagne that retails around $210, but Silversea sells for $150. It was hard to pass up such a bargain. Right? 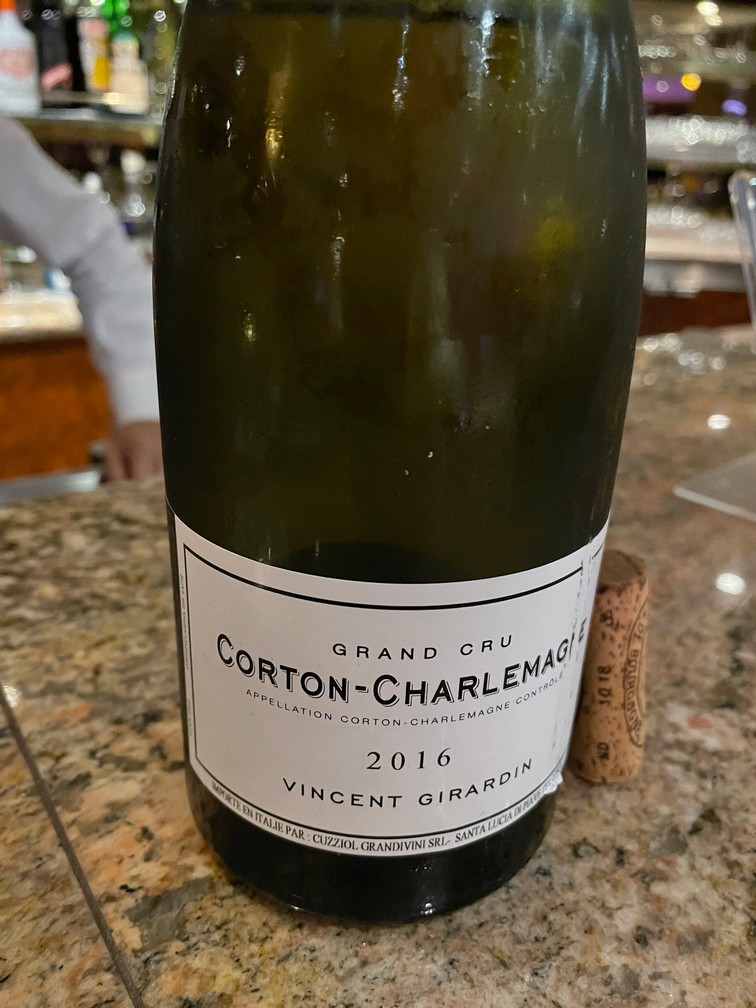 By the way, try that wine with perfectly prepared rare duck…a clear violation of the “rules” of wine pairing.  It creates some culinary magic.

After my wonderful cocktail hour and dinner at Silver Note I thought I’d visit the Connoisseur’s Lounge for a late-night whisky and a cigar. It was a good idea and the end to a wonderful first day on Silversea’s Silver Muse.