Yes, I do have Champagne Wishes and Alaska Dreams! Many, but not all of them, have been coming true on my Silversea Silver Muse cruise. 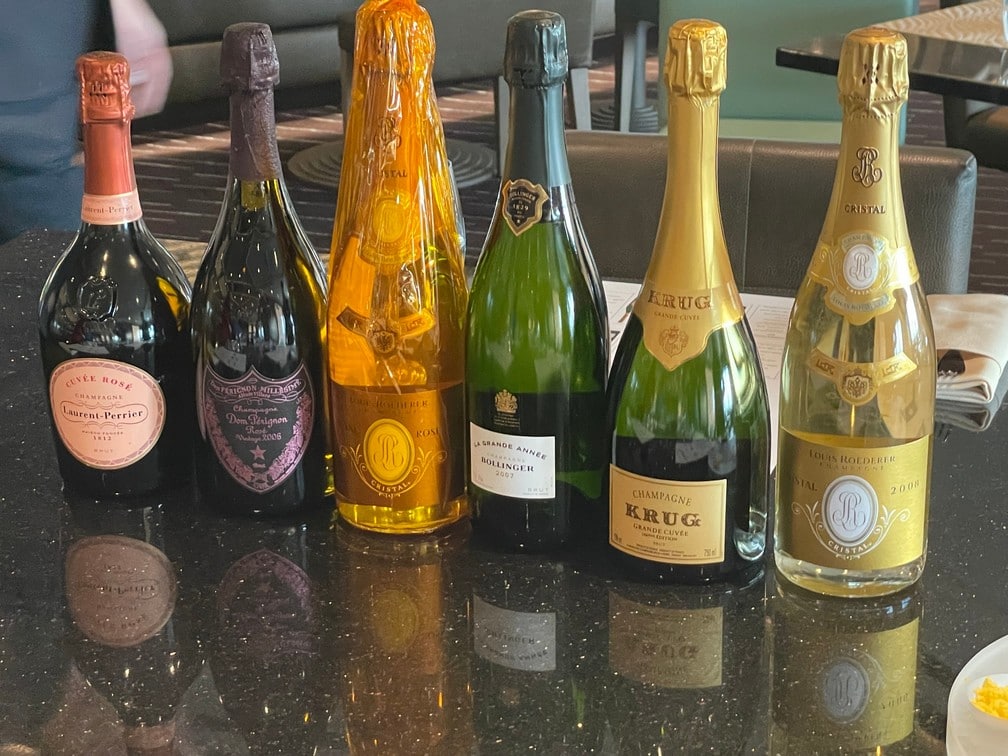 As you read this article please keep a couple of mitigating factors in mind. First, this is the last cruise before the Silver Muse heads to Indonesia for another lay up, so with no “next” provisioning is not “normal”. Second, this is the end of the Alaska season and the weather most certainly confirms why.  Third, and possibly more importantly, the staff and crew have no idea what their future is going to be…other than they think they are headed to Indonesia after this cruise, but aren’t sure. Perspective matters.

It is with that combination but then only a quick burst of employment and another round of the unknown, I have found, without exception,  the staff not only to be friendly and charming, but efficient.  I don’t know that I could put on such brave smiling faces while doing my job so well.  With most being Filipino, Indian, or Asian there is more of a deferential treatment, rather than a more engaging one; in part due to culture and in part due to limited proficiency in the English language. Stylistically I prefer a more engaging experience, but I certainly have no complaints; especially since as the staff gets to know me they have opened up quite a bit making our interactions more “human”.  (It is amazing how much it matters when I ask them to call me Eric rather than Mr. Goldring.)

One pet peeve: Plastics! Silversea uses too many unnecessary plastics. Plastic water bottles, plastic swizzle sticks, plastic-wrapped Q-tips, styrofoam coffee cups with plastic covers, etc. The time has long passed for such items to be on a cruise ship.

Now back to the cruise!

Heading into my two sea days I had a very tight and complicated schedule: Nothing!  With bingo and trivia not viable options for me, I went with, well, the Champagne & Food Pairing event. With the Head Sommelier being charming, knowledgeable, and – very importantly – approachable, I was in.

Six excellent champagnes paired with small tastings and one full serving of Silversea’s caviar. As impressive as the champagne list was:

the caviar wasn’t. It was nicely presented, but were very large eggs without much saltiness and texturally was more akin to smaller salmon eggs than sturgeon caviar. I am confident that if the eggs were properly salted the eggs would shrink and have a pop rather than a burst.  Oh, I ate the caviar and would if presented again, but haven’t ordered since. 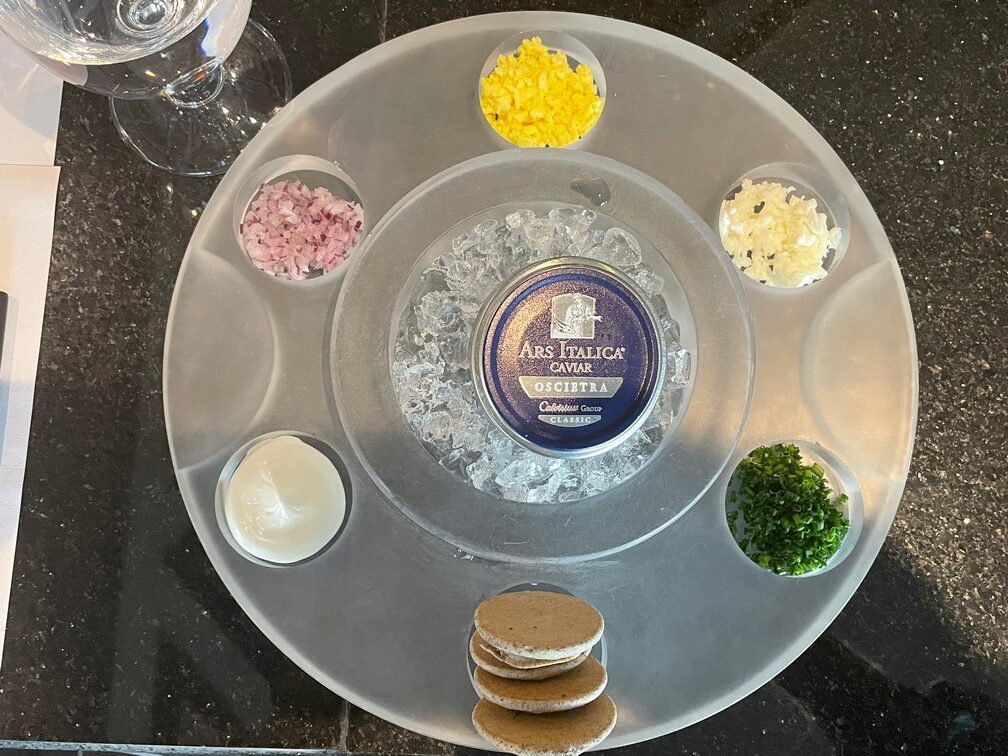 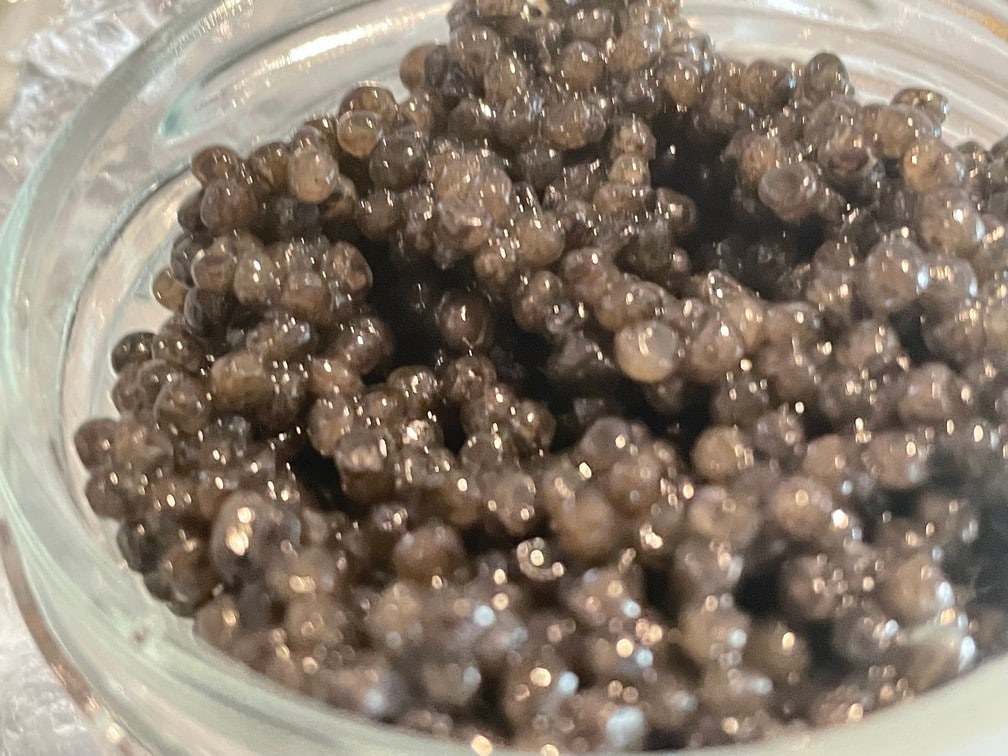 At $200 per person, the champagne tasting was expensive, but I think it well worth it; especially if one considers it to be in lieu of a shore excursion…and for me, well you know, it is kind of one of my favorite excursions!  There are two more seriously high-quality wine tastings scheduled for the last two days of the cruise.

Speaking of entertainment,  there is also a plethora of more normal entertainment options, though they are mostly designed for an older crowd.

When combined with the other venues such as Arts Café, Tor’s Observation Library, and the Connoisseur’s Corner, there are quite a few options.

One thing that I am finding missing is “The Show”.  It is more than the officers not being out and about the ship and when they are not being interactive. It is there is no “We are in Alaska!!!” on deck or in a dining or bar venue events (even with the rain). There is no highlighting of local salmon or halibut (halibut was slipped into a couple of menus, but I’ll get to that in my next article.)  I did have a couple of local beers place in my suite’s refrigerator, but that was it. Frankly, one gets the feeling that this cruise could be anywhere. More creativity and energy would be really appreciated…and would enhance the “travel” experience.

Speaking of Alaska experiences, I went on two tours; one in Wrangell and one in Sitka.  Before I get to the tours themselves, there has to be a way to keep guests off of tours they are not physically able to fully participate in.  I get that most people don’t want to admit they are aging or aren’t living in their 20-year-old bodies (though I have not sighted any bad toupees!), but they need to live in a world of everyone’s reality and not just their own. It adversely affects those around them and, without question, puts them in danger of causing harm to themselves.

My tour in Wrangell, Alaska was entitled, “High Country Extreme Hike” and Silversea stated in bold “This tour is designed for athletic, energetic and physically fit adventurers.  Approximately walking distance is 4 miles with many steps throughout”. I am not sure that Silversea could do anything else other than listening to, for example, one woman who said just as we were about to depart, “I have bad knees so I hope there aren’t too many steps or downhill” and then deny her the tour. Ugh. 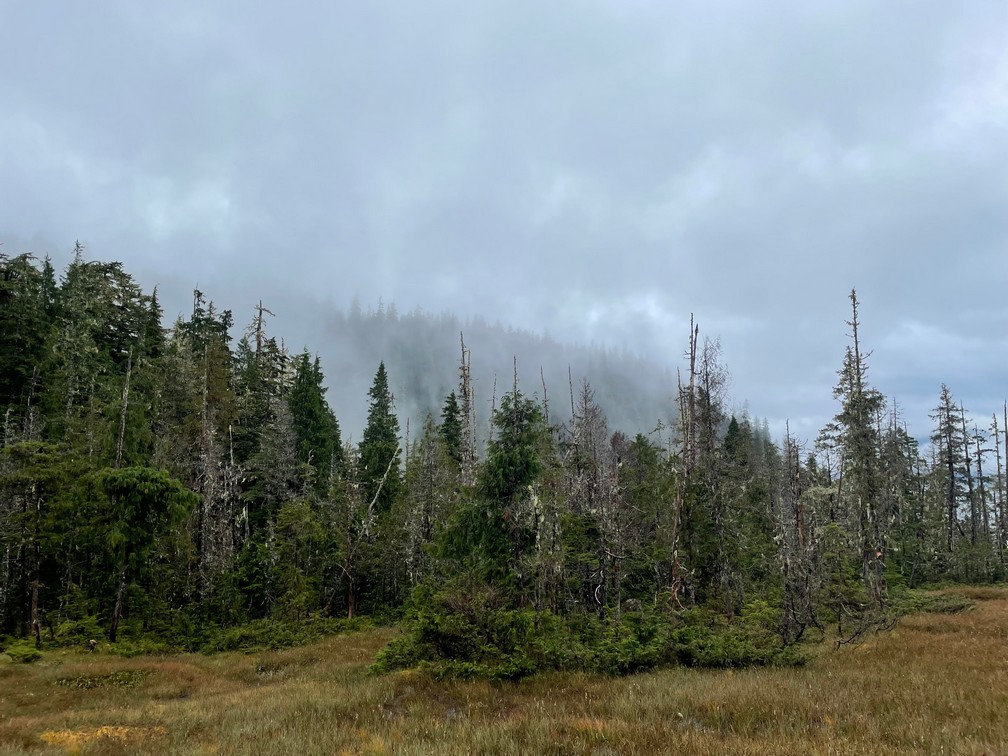 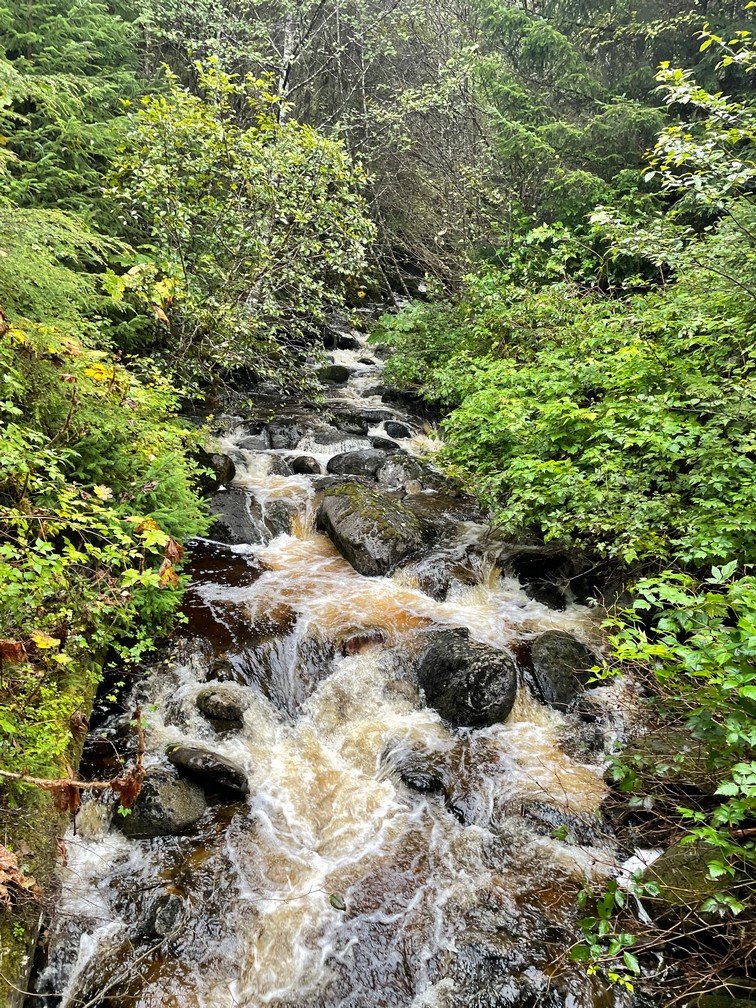 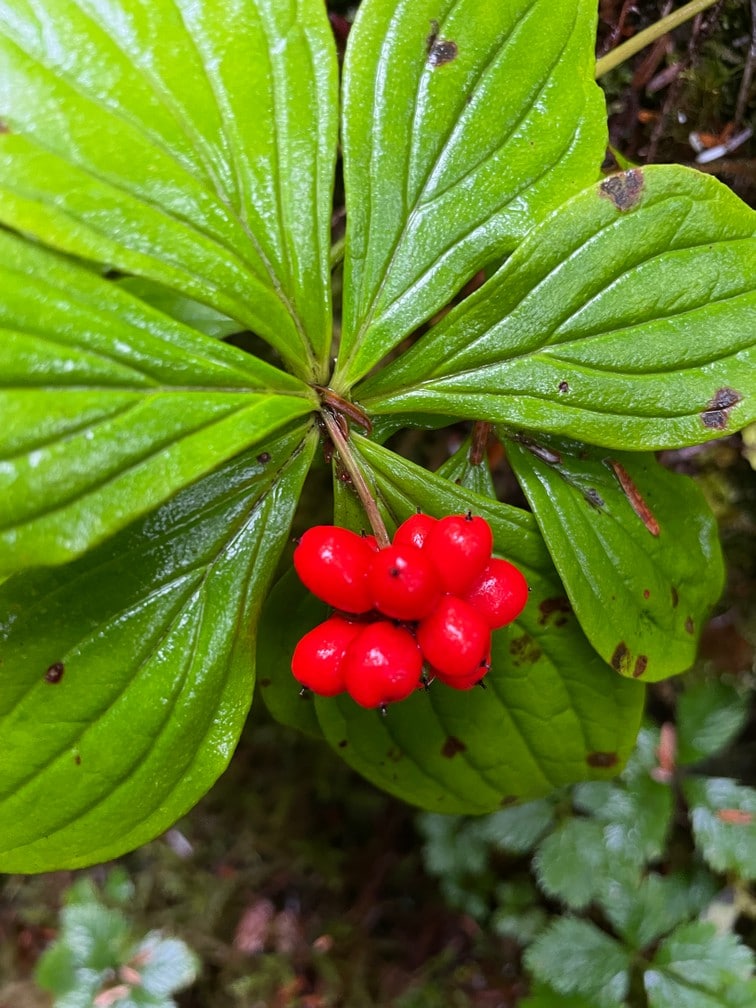 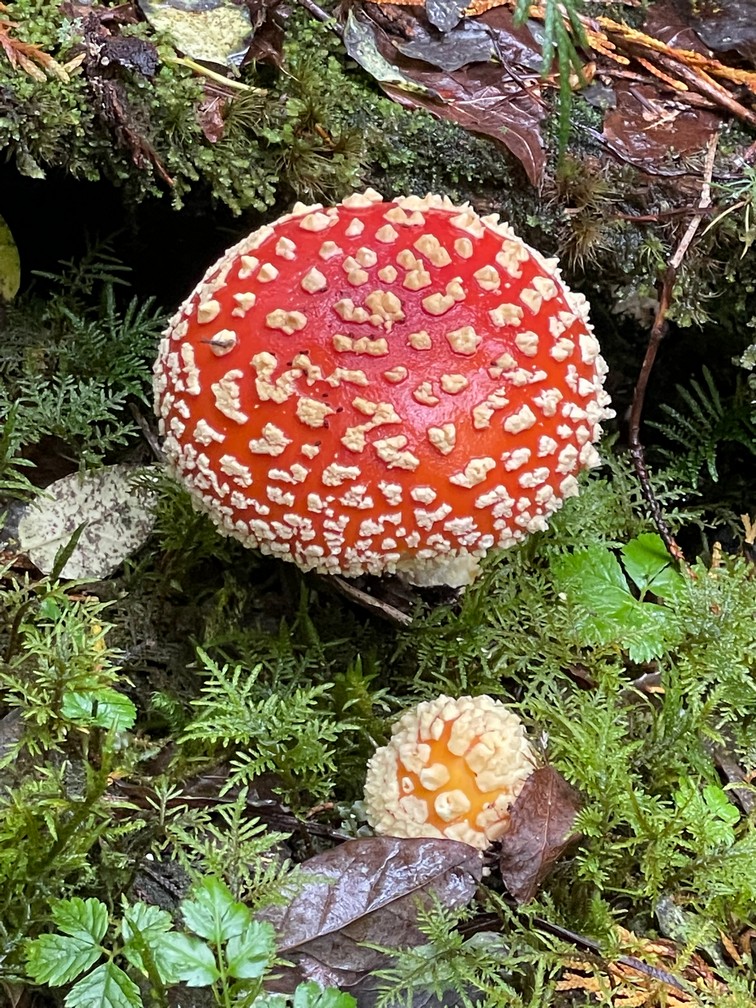 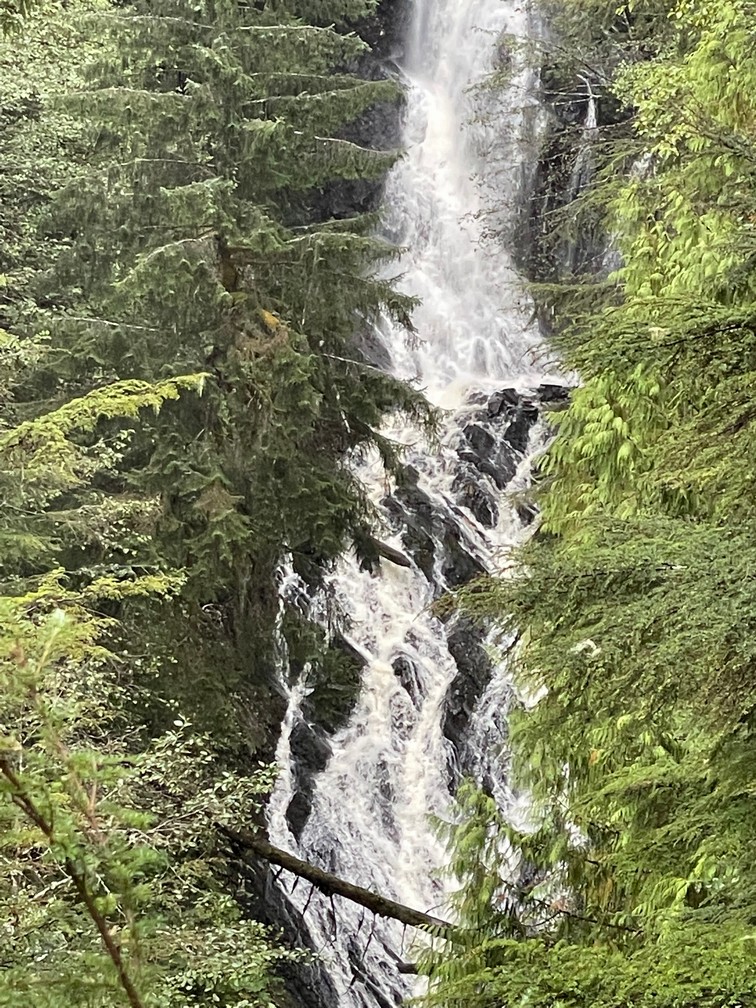 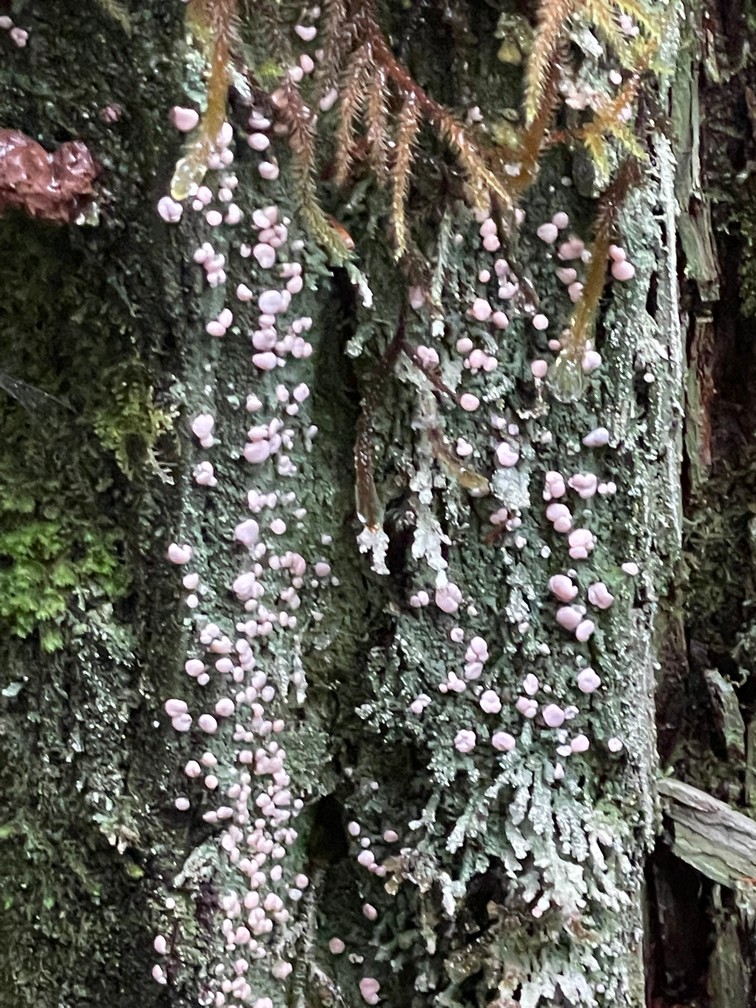 This was a shortened version of the Up and Over Hike I took on Seabourn a few years ago which consisted of 5,400 wooden stairs interspersed along miles of slick wooden boardwalks climbing through high altitude muskeg (bogs) with a 1,000+ foot rise. Unfortunately, due to certain members of this small group not being of the sort intended we constantly had to stop or slow down as they trekked uphill.  Eventually, around lunchtime, the guide (who was excellent and was, in fact, the same guide I used last time) gently tried to have the weaker folks eat there while we hiked up higher. We never did get to the intended end.  But it was nonetheless a great hike and I got some nice clean moist air in my smoke-filled and dry lungs from living this summer in Tahoe.

My second tour was in Sitka, Alaska entitled, “Tongass Rainforest Hike”. It was not my first choice, nor was it for another couple, as we were wanting to get on the sold-out “Back-Country Hiking Adventure”. Well, let’s just say this was neither an adventure nor a hike. It was, I kid you not, a stroll with a guide who was basically a charming third-grade teacher. So we walked twenty yards, lined up so she could see us, learn about something about nature…or pie making, walk another twenty yards….Well, you know me: About two-thirds of the way through I was getting the “stink eye” as I didn’t line up and wandered a bit, with my frustration and disinterest written all over my face.  I just wanted it over. Ugh.

Despite the frustration, Alaska is a spectacular place, and watching the pink salmon run is special. 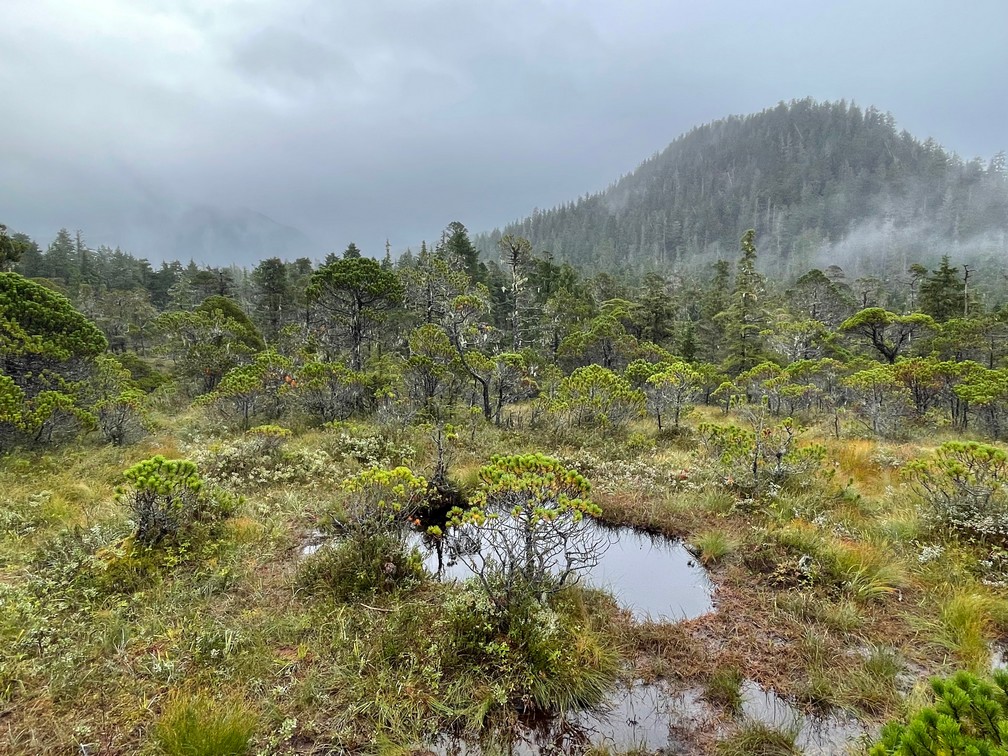 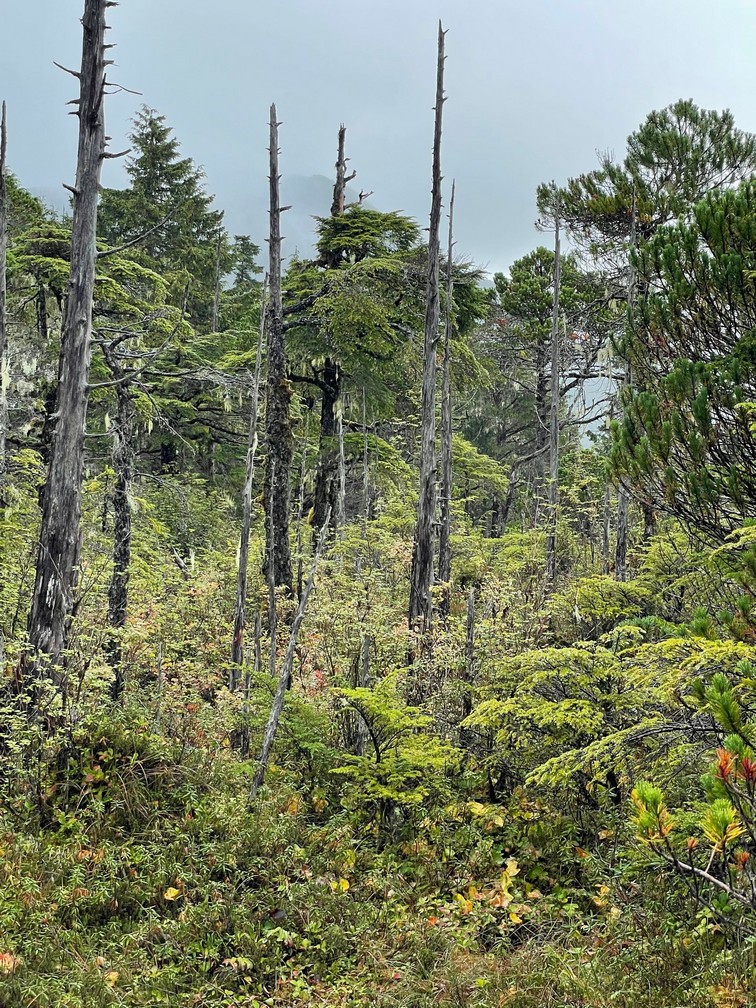 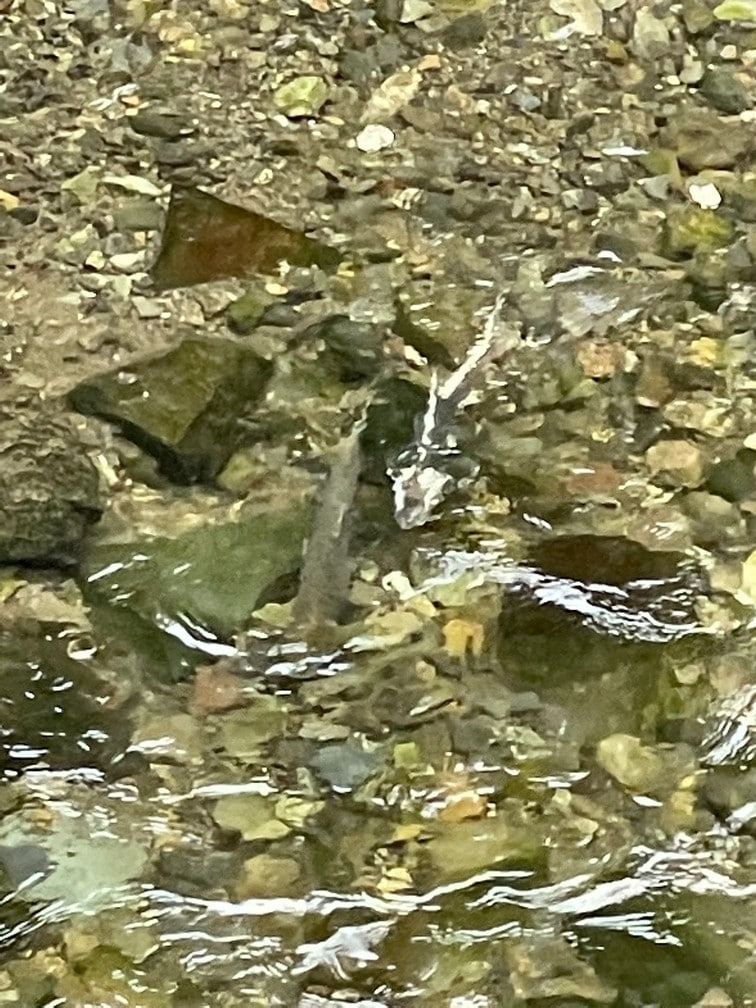 Silversea was truly shocked as what we received was not what was to be delivered. They also, with great deference, refunded my money for two other tours/hikes I had booked as I didn’t want another of either fiasco to occur. I should have considered private guides.  And Silversea should have refunded my tour cost. A miss.

The other disappointed couple and I decided to wander around Sitka and then head to this little seafood chowder joint that is just past the marine science museum (where one of my Truckee friend’s daughters works…I decided I didn’t need to bother her by having one of her dad’s friends stopping in). It was nice to actually move more than twenty yards at a time, but disappointing to find my anticipated seafood chowder closed on Mondays (apparently known as Sitka Sundays).

So with that, I said, “Let me see about getting a massage to make my day better.”  And I did!  At first they said they had a space at 4:15 p.m. but then said, “Unless you want one right now.” Now is good and so was my 75 minutes of bliss…and a far better investment than another tour.  I did go for the buy three and receive a 10%, 20%, 30% discount on each succeeding massage. Heck with three more Sea Days and a masseuse that actually gave me a muscle relaxing massage why not?

I also must compliment the spa staff for being incredibly friendly, polite, and never trying to sell me more services or products. 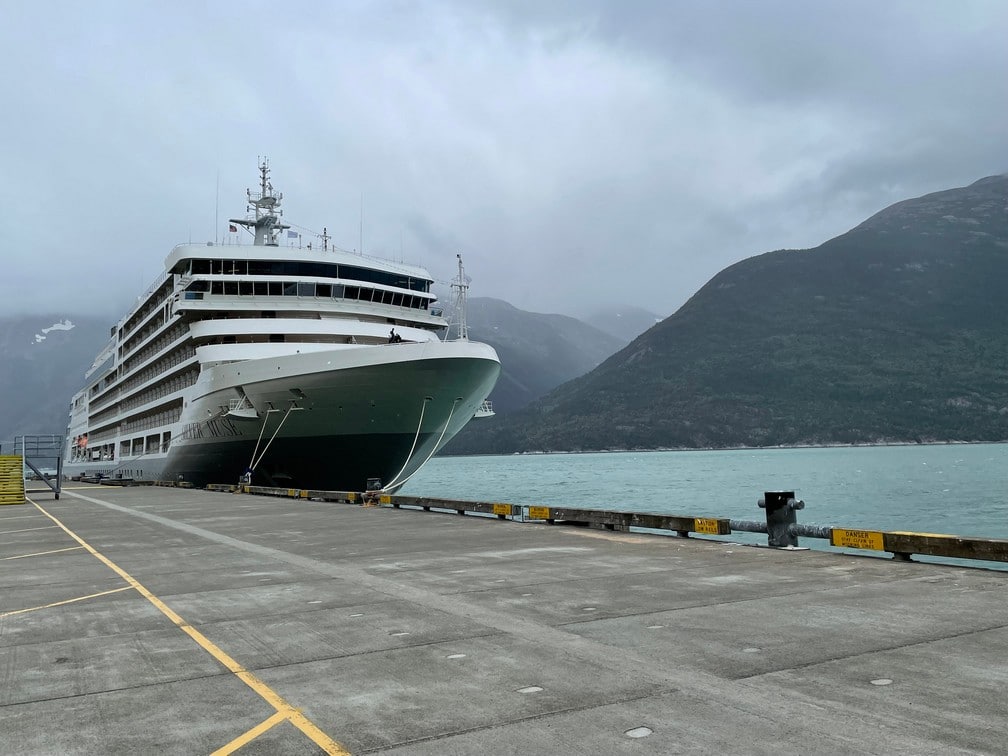 Next up was Skagway, Alaska; home of the famous tourist bar, “The Red Onion”.  I headed into town only to see the Celebrity Millennium docked ahead of us.  With a cold wind blowing, a good bit of rain, and finding pretty much fifty percent of Skagway was closed for the season The Red Onion was packed.  What was just wrong was the bar was filled at 10:30 a.m. and not a single “patron” was drinking a beer. They were just getting out of the weather or waiting for the touristic Brothel Tour upstairs for $10 (seriously). Oh well. So I headed back to the ship for some free day drinking…I mean work…Yeah, work…and a nap! 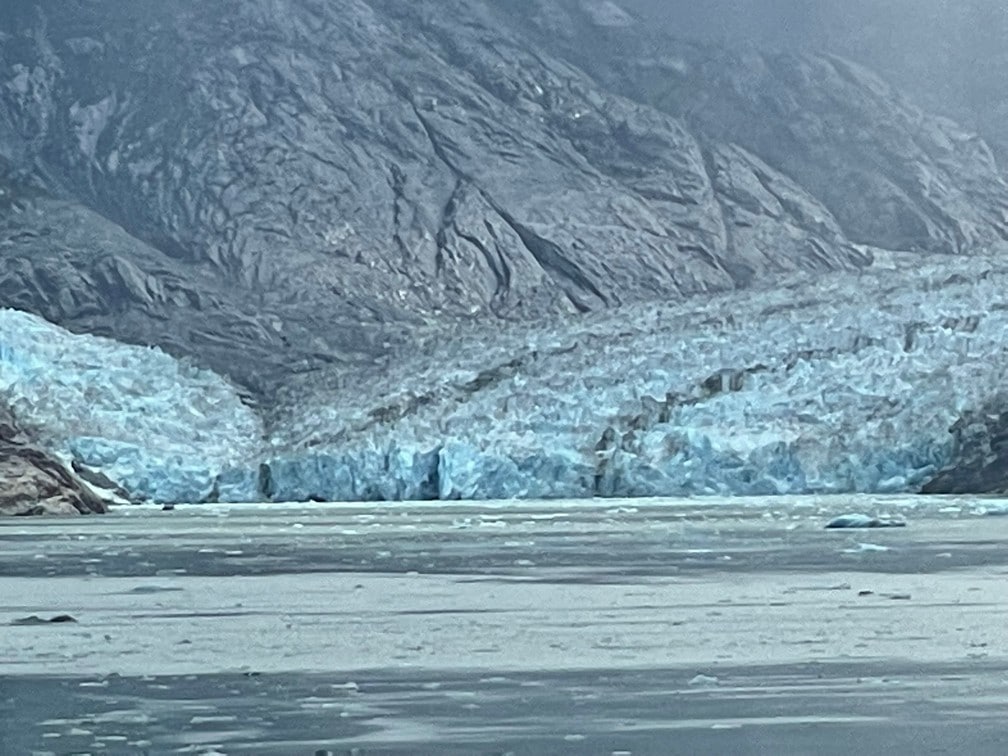 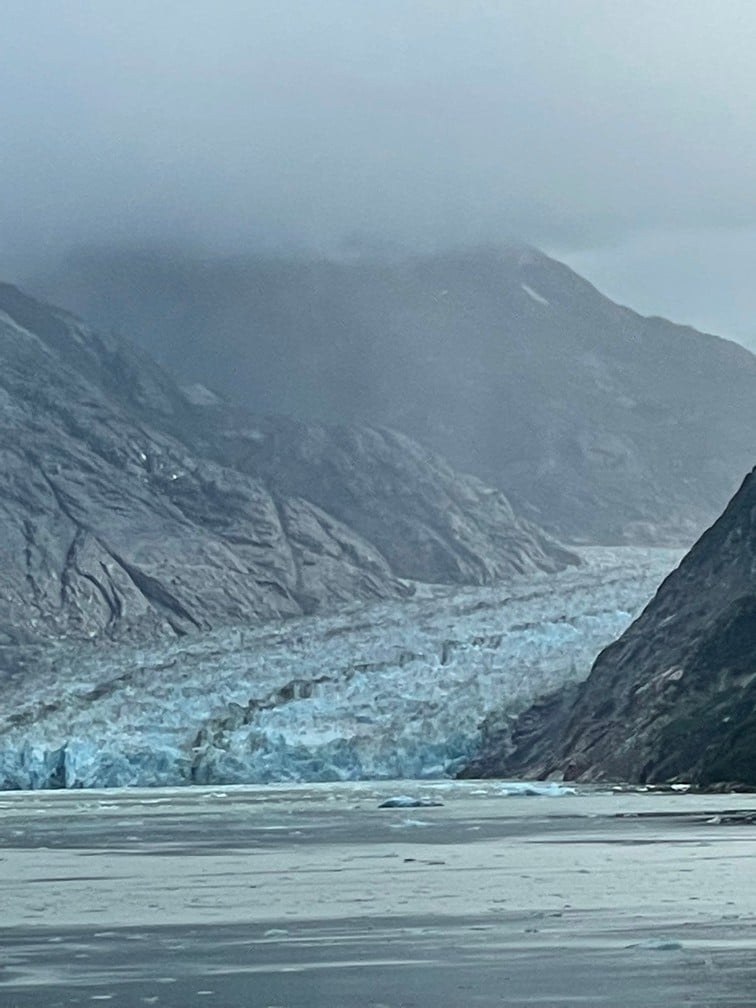 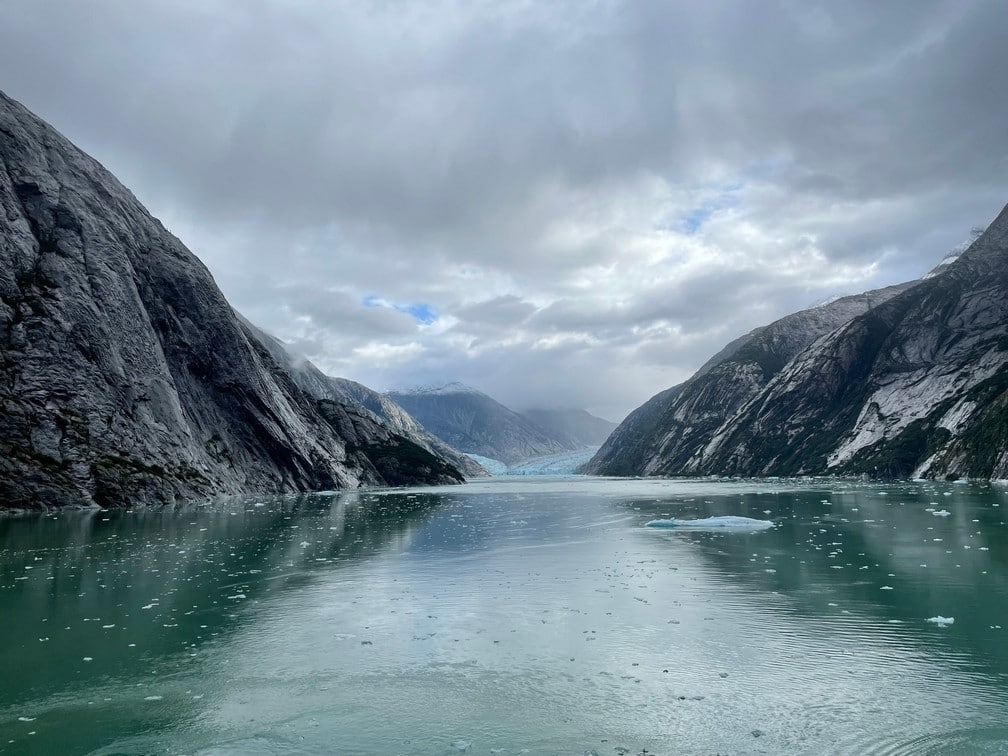 Endicott Arm and the Dawes Glacier was next. I was happy to stay onboard rather than take the excursion to Tracy Arm to see another glacier. Why? ANTARCTICA. My excitement the first and second time here has been significantly diminished, but not only because of seeing so many huge and majestic glaciers in Antarctica but because of my depression over how far this glacier has receded.  Knowing we wouldn’t be there until mid-morning I figured it was a great time for my second massage. I was correct!

It was also time to check out room service for lunch as, honestly, nothing was really inspiring around the ship. I was pleased with a spring roll starter followed by linguini with pesto.  Then some work and a nap prior to docking in Juneau and a trip to the Red Dog Saloon; a family favorite!

Although it originally stated we arrived in Juneau, Alaska at 10:00 p.m. it was revised to 6:30 p.m., so upon arrival I headed out into a 70% closed Juneau. I was just fine with that as I was not in search of diamonds, Tanzanite, a glowing t-shirt, or an Ulu knife. I was focused on heading to The Red Dog Saloon.

Walking into a quiet, sans sawdust floored, bar was not what I was expecting. But the trooper that I am, I sauntered up to the bar (I like to saunter!), ordered a duck fart for myself and another guest along with an Alaskan Amber Ale. A duck fart is a classic: A shot glass of Kailua and Bailey’s with a floater of Crown Royal obtained by pouring it over a well-used Maraschino cherry.  (OK I had three duck farts.)

My final day in Alaska was a colder, rainy, one with only a bit of work and lunch at the Red Dog Saloon on my schedule. Seafood chowder, reindeer sausage, and codfish & chips.

And then it was time to say goodbye to Alaska and hello to two more sea days.