Goldring Travel’s 2022 Culinary & Cultural Cruise on the Windstar Star Legend – October 2, 2022 (“Inuit to Istanbul”: Getting There & Getting Started)

As I head out on my 2022 Goldring Travel Culinary & Cultural Cruise on Windstar’s Star Legend, visiting Turkey, Greece, and Israel, I find myself to be hyper-focused on the “cultural” aspects of this journey. And, for me, it is a journey…”From Inuit to Istanbul”.

Just two weeks ago I was immersed in the Inuit culture of North and Western Greenland and Northeastern Canada. The Inuit culture, even with my admittedly limited but thought-provoking exposure, found a spot in my psyche. Even with the centuries of abuse by white people, they have maintained a particularly pure view of life; a quietness combined with a subtle strongness.  In a way, it is not dissimilar to martial artists that use the powers applied to them (the harshness of their environment) to their advantage.

After a short respite in Lake Tahoe, fortunately finding some time to commune with the “locals” to recenter myself, I was off to Istanbul with its also ancient and proud Turkish civilization, but not so much based on a balanced harmony with nature life philosophy.  Heck, the Ottomans were a pretty rough bunch and their decadence was central to the empire’s downfall. From there Greece, from philosophers to warriors. And then the complex, tragic and triumphant cultures of Israel – with much of its focus on religion and politics; currently overshadowing much of its ancient history.  Whew! That is a lot.

But, while the journey has started, I still have to get there. (Not the most graceful segue, but…)

Originally, I was going to use miles for my flights to Istanbul, but with all of the travel issues (especially in Europe) I decided to bite the bullet and pay for my flights: United: Reno to San Francisco, then a six-hour layover,  then Turkish Airlines: San Francisco to Istanbul. That substantially reduced my chances of lost luggage, a flight being canceled, etc.

So why the five-hour layover?  Oh, I could have taken a later flight to SFO, but twice I have been forced to drive to SFO because of issues with delayed/canceled flights. So rather than dancing with the 3.5-hour drive (and back), I figure taking an early morning flight (the plane arrives the night before) and then sitting in the United Club was a safer, less stressful, option.

I could not get my preferred bulkhead-aisle seat on either flight, but I did secure exit row-aisle seats (with the long flight being a true exit row so nobody in front of me. (And, again, I don’t normally fly business class because (a) it really doesn’t improve my overall “flying bus” experience; and (b) this is my business and blowing a lot of profit on a bigger seat for a few hours doesn’t make sense to me, as I can sleep pretty much anywhere.)

My flight to San Francisco was on time. I even arrived at THE FIRST F GATE! But, alas, what a waste of a life experience, as after my long walk, the United Club in the International Terminal in G was closed due to staffing issues. So, it was a long walk back; only to find the American Express Centurion Club closed for renovations. Thus, an even longer walk to the F-Gates’ United Club…which, obviously, was overrun with passengers that also couldn’t avail themselves of either option. But…and it is a big “but”…I am fortunate to have club access rather than having to endure that amount of time in the terminal.  And, with two of my guests having to deal with their flights being canceled and two others with luggage issues, even before they left the US, I consider myself even more so.

Years ago, I wrote an article in 2009 about the embarkation and disembarkation ports are like the bread of a sandwich; they may not be the meat, but they are important. It’s Like a Sandwich! Seabourn Spirit – New Ports for 2009 – Goldring Travel  And this seems to be a trend with my Culinary & Cultural Cruises due to the demand of my clients/guests!  This year we are starting with a pre-cruise full day Private Experience in Istanbul and next year it will be the same in Lisbon.

But let’s not get ahead of ourselves. First, I have to get to Istanbul! The flight was fine (Turkish Airlines from service to food is far superior to US airlines) and I literally got through Immigration and had by bags in less than 30 minutes.  (The new Istanbul airport is huge, but it seems to be efficient.)  It was only 12:30 PM and I’m set.  However, one of my clients with the luggage issue was on my flight and we agreed to share a private transfer.  Note that in Istanbul the drivers do not meet you as you exit Customs, but rather outside by Gate 9 – probably an alfresco experience as a result of Covid protocols.  And there he was. Perfect…And then it wasn’t.

Sparing you all the details, Luggage Free was horrific. Not only did they dishonestly withhold that it was impossible for them to deliver my clients’ (plural) luggage to their hotel before their arrival, but that in order to have their luggage released Turkey requires the luggage owner to provide proof they are actually in the country; which means they have to show the entry stamp in their passport. Add to that weekends, time differences, etc. and even if Luggage Free was given the information they couldn’t deliver the bags for days!

Not to worry, Luggage Free said: We will send you directions and you can pick it up at DHL at the airport, so we planned a quick stop on the way to the hotel.  But there was no Luggage Free representative to sort things out in Istanbul.  Nothing. Nada. Nope!  Long story short, I could do nothing because I was not either the owner of the luggage or Luggage Free. Hence, my clients had to grab a taxi to DHL, visit six different areas, obtain various documents and after over five hours finally had their luggage. (Disclaimer: I cautioned against using any luggage service as consistently the word was on time delivery was not guaranteed and delivery to the ship on a Sunday wasn’t possible. I did caution, but…)

Was this better than Delta canceling two other clients’ flights and forcing them to fly through Paris with a very long layover?  Close call on that one!

So while they suffered through their ordeals, I had a very easy – but guilt-filled – one-hour drive to the boutique AJWA Sultanahmet Hotel in the Old City of Istanbul. It is a very centrally located luxury property and has a very Turkish décor. The rooms are spacious and well-appointed. The staff, even with limited English, were warm, friendly and could not do enough to please. 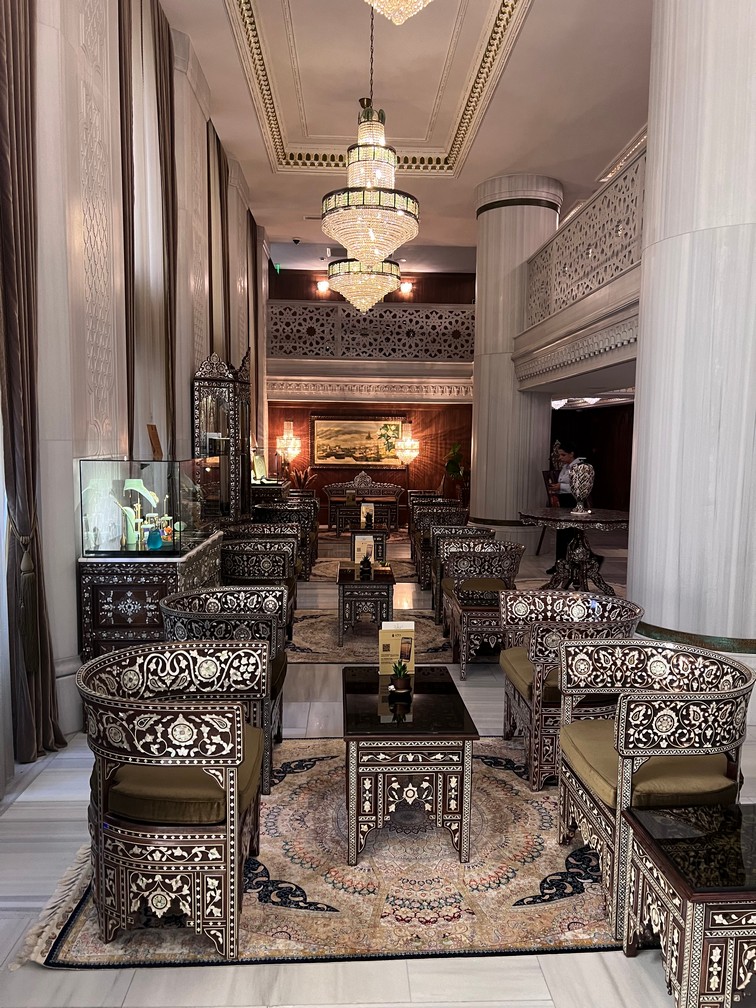 I chose the hotel specifically not only because of the foregoing, but because it is a culturally run hotel.  Ya gotta start the “culture” in the Culinary & Culture right from the start!  The owners are actually Azerbaijani as are some of the very international staff.  So they do not offer alcohol anywhere on the property.  (They have no issue if you bring any into the hotel.) 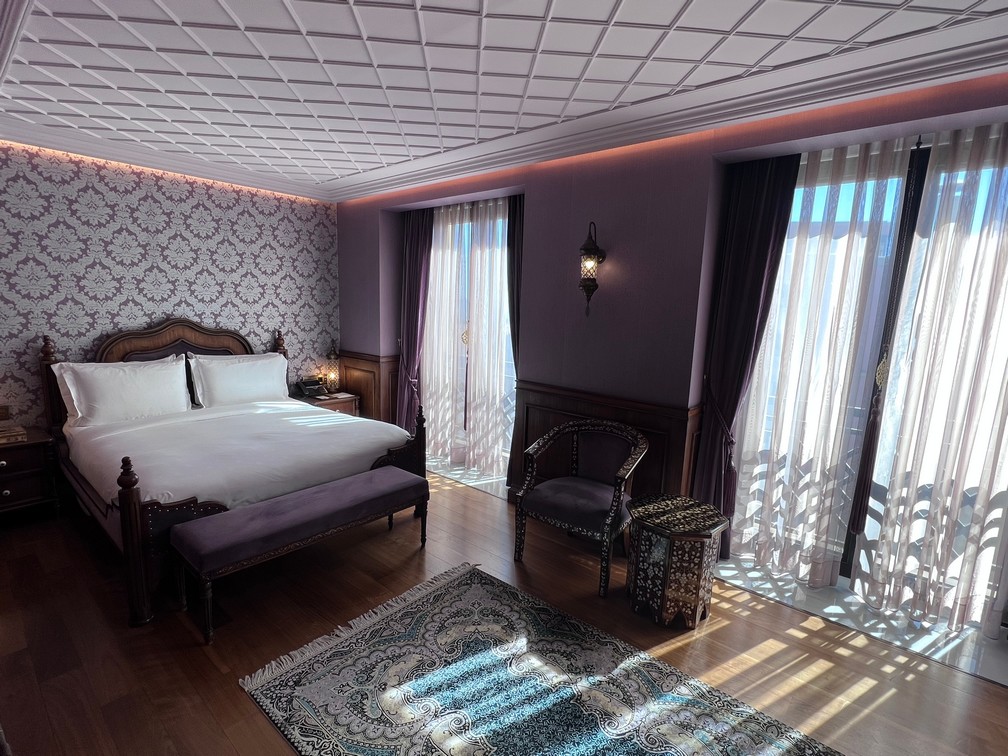 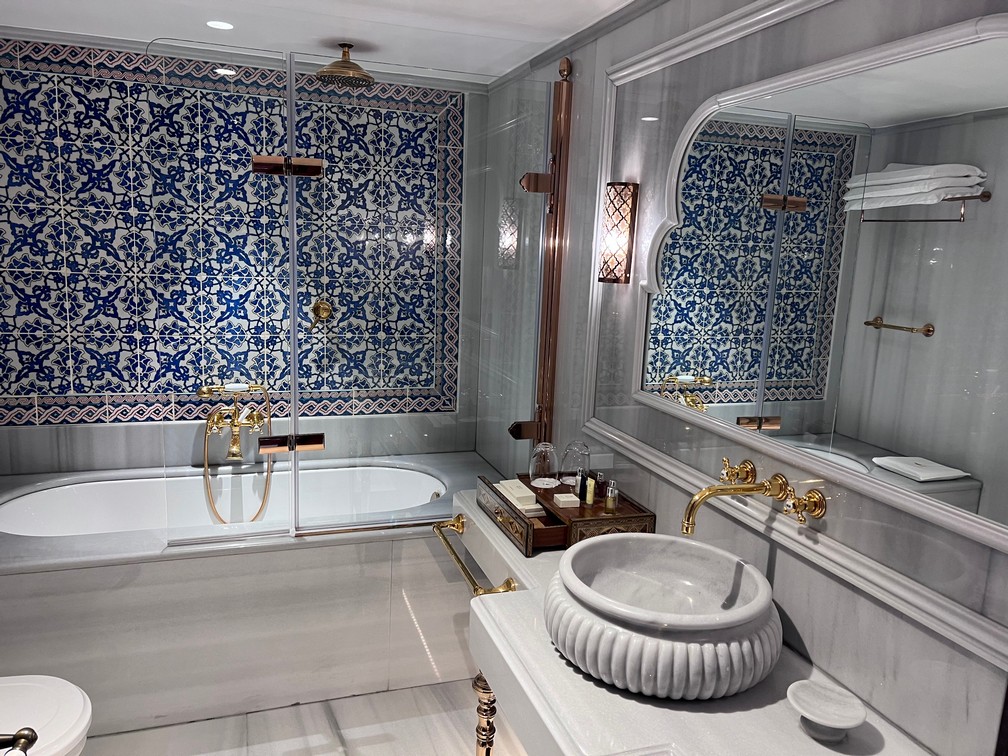 After settling into my room and taking a shower, it was time for me to head out…again feeling guilty as two of my clients continued their luggage ordeal.  As it was 3:00 PM, it was “linner” time (you know, the time between lunch and dinner), so I was concerned about finding a nice place to dine that was open. AJWA Sultanahmet came through!  They said about a twenty-minute walk from the hotel (in Istanbul – especially the Old City – a twenty-minute walk is short) was Aya Fish Lounge; located on the roof of some hotel I never did catch the name of.

Aya Fish Lounge is a small upscale restaurant and at 3:30 PM very quiet. It has wonderful views of the Bosporus and Sea of Marmara, and I had my eye on two particular tables. I was told they were reserved and offered one off to the side, but still with a nice view. However, once I ordered a small bottle of raki (the traditional Turkish liqueur you mix with water and ice…similar to ouzo in flavor and texture) and a bottle of wine (Sulva Narince a very typical  Turkish wine; sort of a soft, but dry, fairly fruit forward, Sauvignon Blanc.  Pronounced Na-Rin-Jay) I was told the sun would be too hot at my table and one of those two reserved tables was now mine!

I ordered way too much food…as I seemingly always do…but I love Istanbul and all of its culinary offerings…and there are so many!  Cacik (pronounced JA-GEEK), which is very similar to Greek tzatziki; Dolmus (DOLE-MOOSH) or stuffed grape leaves, Turkish white cheese, wonderful bread, and some complimentary, and incredibly sweet, melon. 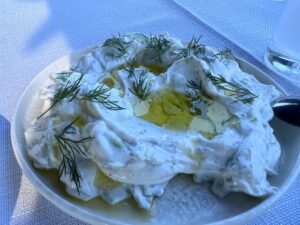 There were too many things on the menu that interested me and the seafood platter (although cautioned it was for two people) was the way to go. Red Mullet (my favorite), Sea Bream, Mackerel, and Calamari, along with Salmon and Halibut. (I asked the waiter when was the last time halibut was caught in Turkey.  He smiled and said, “We are now international!” 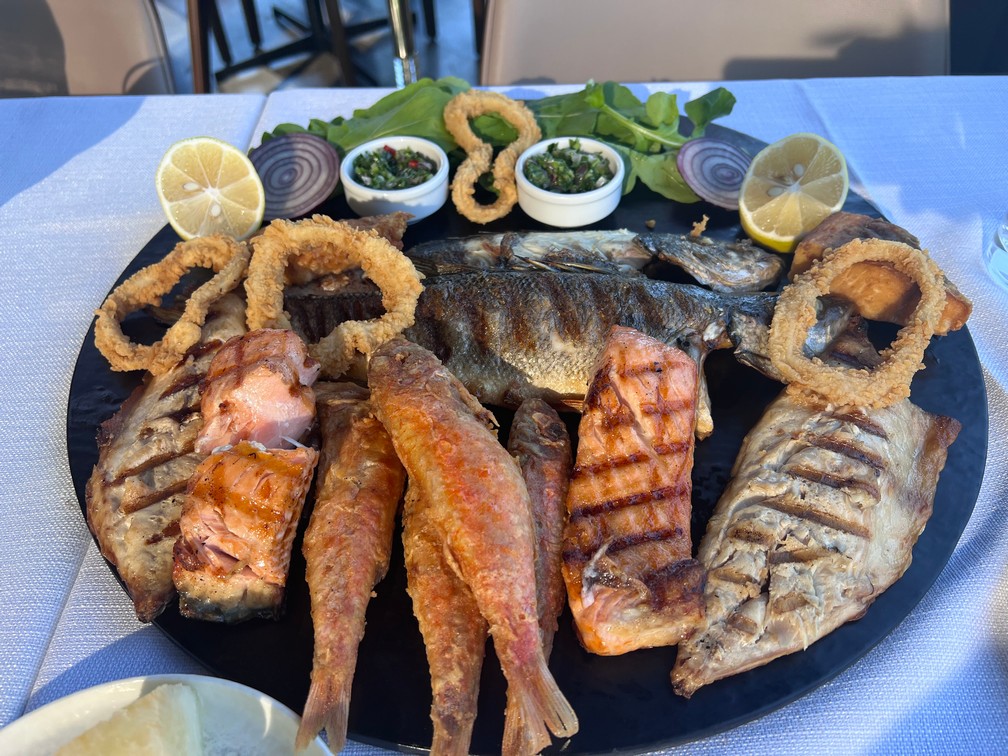 Not done, it was time for Baklava and Turkish coffee! 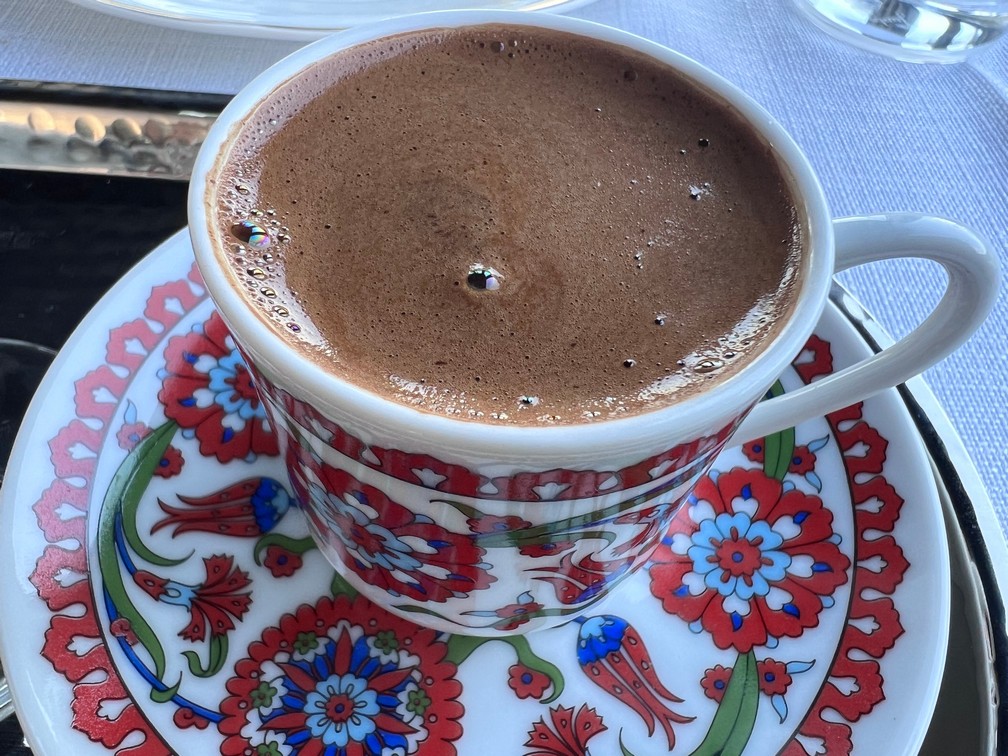 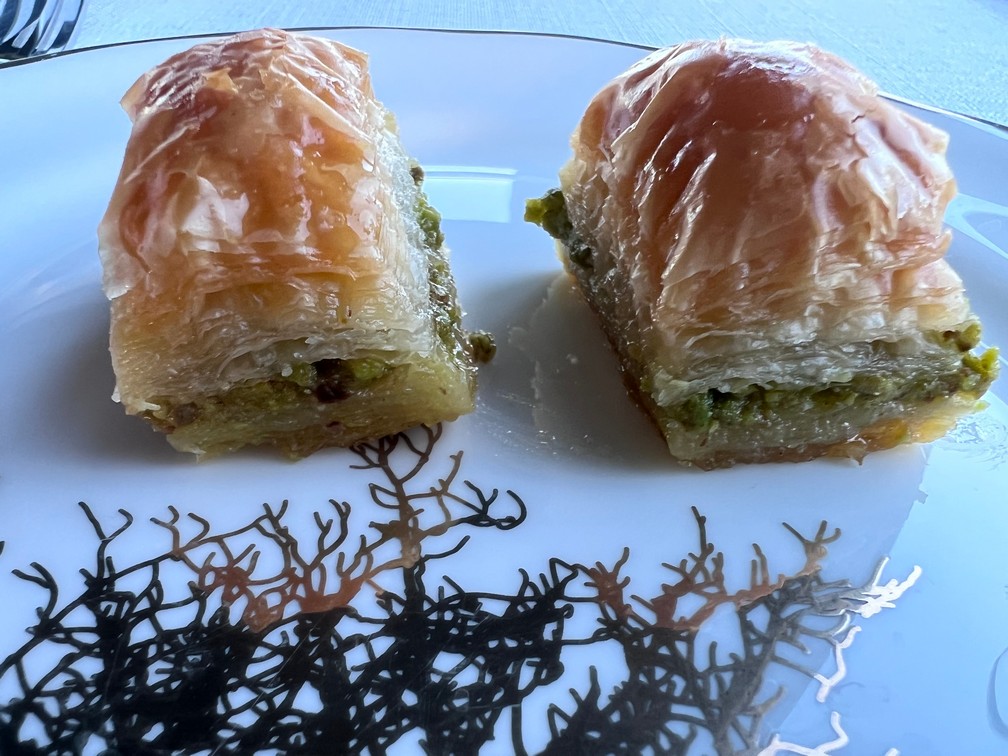 Fortunately, as I was dining I got word my clients were with their luggage and their saint of a taxi driver – who stuck with them the entire time! – were on their way to the hotel.  So being essentially done, I was off to the hotel to greet them and my other guests:  Welcome to Istanbul!

Next up: The first Private Goldring Travel Culinary & Cultural Experience…and that is even before embarking on the Windstar Star Legend!