It was finally time to get the Goldring Travel Culinary & Cultural Cruise of Turkey, Greece, and Israel underway.  This is the third time I’ve tried to provide this experience –  with Covid causing the cancelation twice. It also put the suppliers I had made arrangements with to have difficulties, as have most everyone in the travel industry. So this year’s “C&C”, as it is affectionately referred to by my clients/guests, is especially sweet! 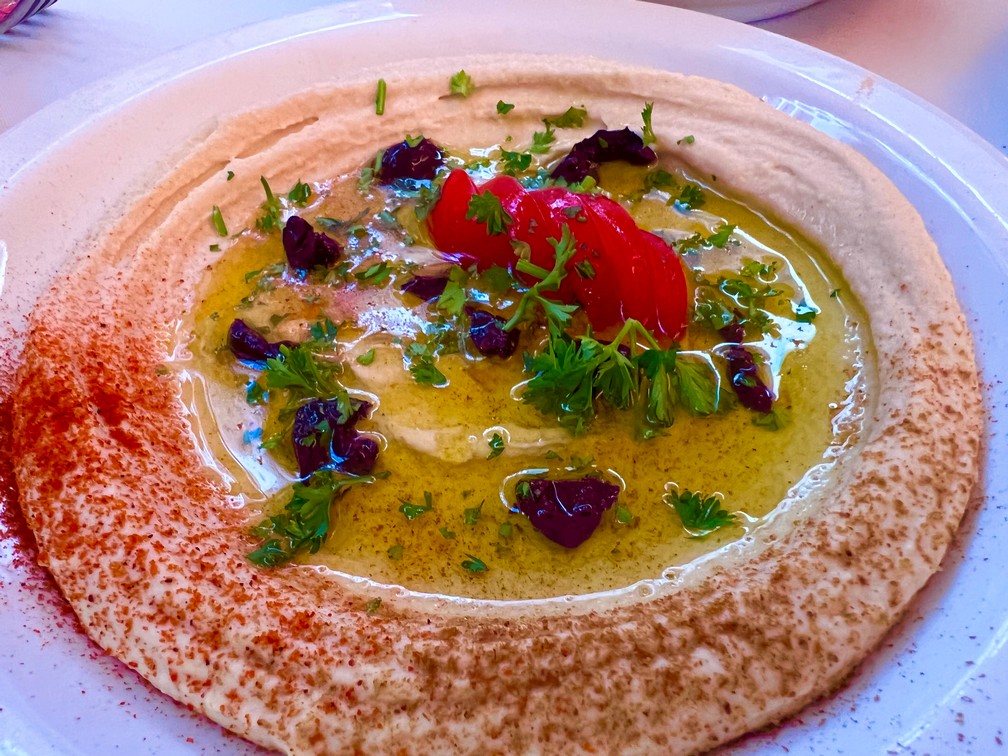 Our group of 12 met in the lobby of the AJWA Sultanahmet Hotel at an early 7:30 AM for a very special way to first experience Istanbul: On a yacht with a full Turkish breakfast along with two guides to talk about the cuisine and history.

Having been to Istanbul a number of times I knew that seeing Istanbul from the Bosporus would give an entirely different perspective of how large and diverse the city is…and how the mix of ancient history and modern luxury intersect while also existing in somewhat separate worlds.  At the same time, one of my favorite parts of Turkish culture is breakfast. And from that, a unique and, fortunately, truly enjoyed experience was had. 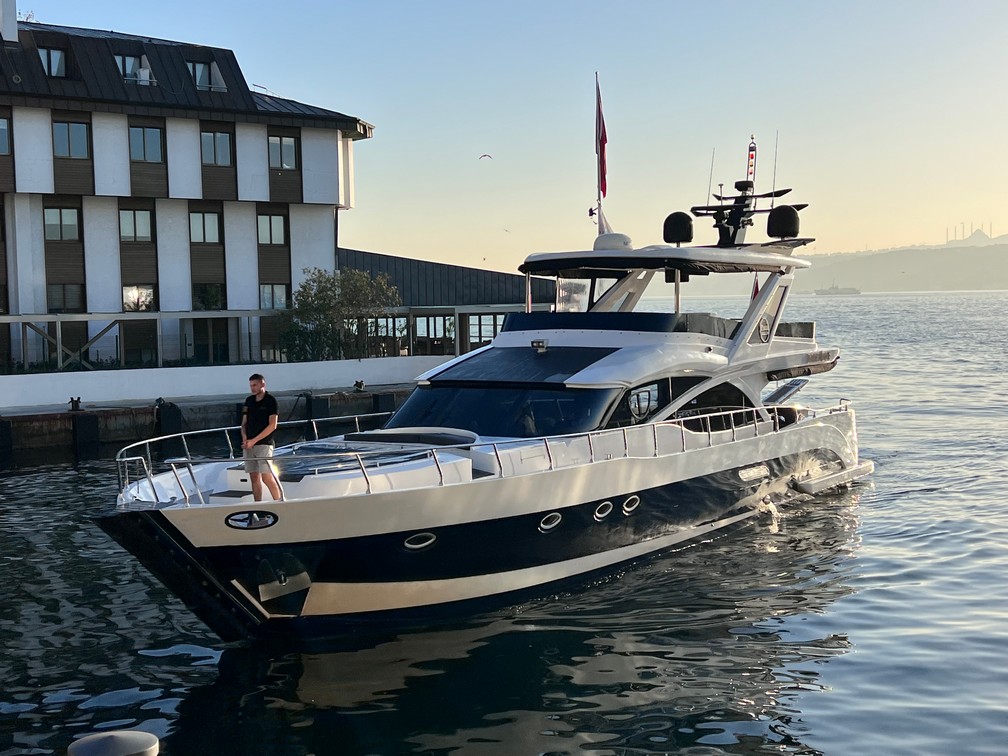 We met our yacht (OK, for me it is a boat, but for those not in the superyacht world, it was a yacht) at the new Istanbul cruise port. What a huge improvement from the old warehouses with nothing around. It is a destination in and of itself!

With the sun rising, the breeze gentle, and the waters calm we boarded and started our journey up the Bosporus. 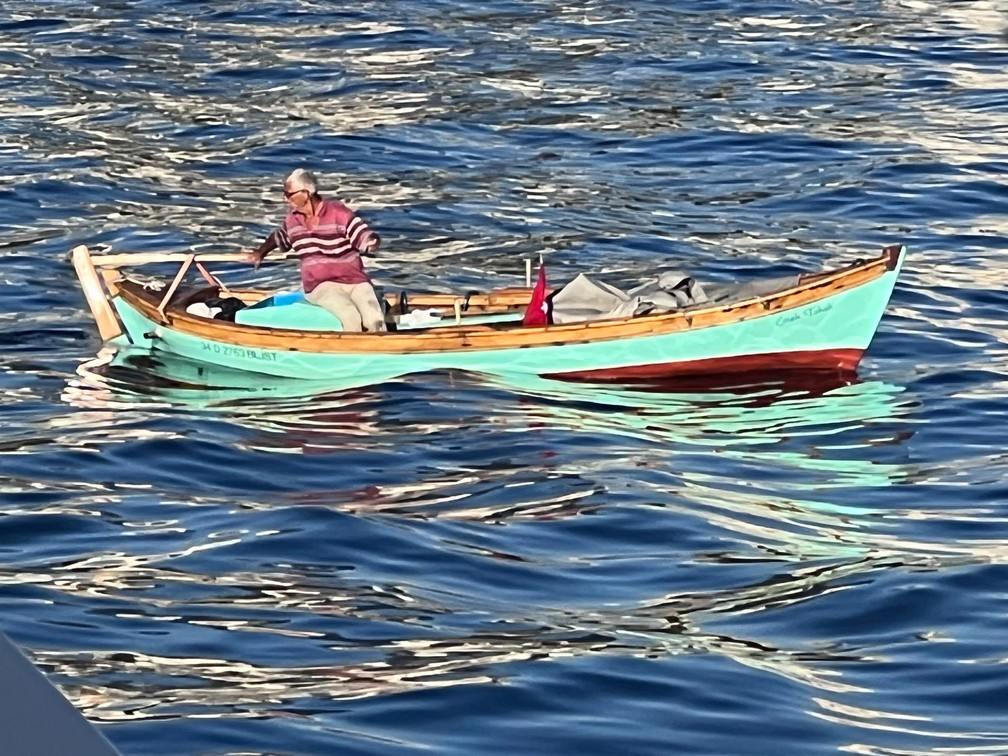 As it was explained that we were heading in the direction of the Black Sea, it was noted we were not going there, calming anyone’s concerns about being near the horrific Ukrainian War. That transitioned into a discussion about Turkish politics and its unique position of keeping relations (both political and economic) with Russia, its complexities, the benefits of having a party that has dialog with both Russia and the West, the troubles of the same, and the delicate balance that is hoped to be maintained.

That led to a discussion – at my less than subtle urging – of the issues with Turkey’s strongman president, Erdogan.  Our wonderful guides were definitely careful with their comments and I filled in a good bit of the reality: Educated and Economically Powerful minority disliking him vs. the Uneducated and Conservative rural majority supporting him. Once that ice was broken, a good conversation about how the Educated/Economically Powerful people have voted out Erdogan’s local governments in Istanbul and other cities, so a sort of rebirth and massive restoration of historical sites is underway.

As we cruised by the palaces (both ancient and modern), luxury communities, development of the Asia side of Istanbul, and how the European and Asian sides were not even connected by a bridge until the late 1970’s were discussed. 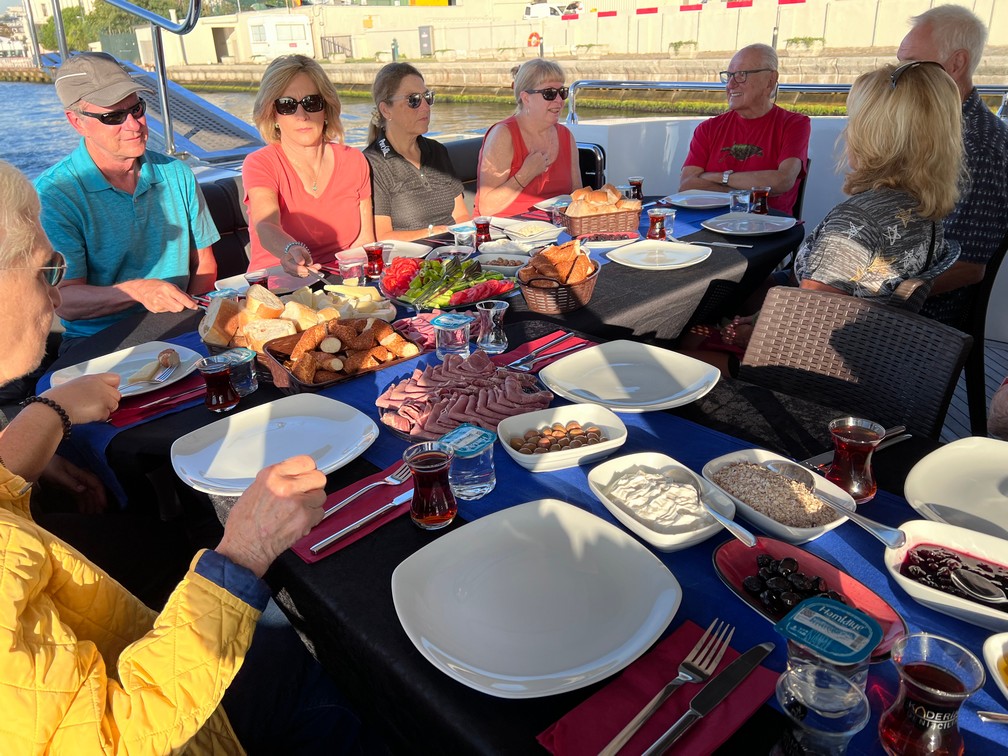 Then everyone came down from the flybridge to our Turkish Breakfast and the discussions continued…eventually breaking into smaller discussions of so many things of personal interest.

Because there were so many culinary offerings, it was impossible to photograph all of them. Delicious sesame breads, thick yogurt, meats, cheeses, olives, peppers, cherries, tomato and cucumber salad (there is always that salad at a Turkish meal!), clotted cream with honey (a huge favorite), strawberries, bananas in honey, Menemen (Turkish scrambled eggs with tomatoes, peppers, and onion) and more were offered.

After our two-hour cruise came to an end, the reality of Istanbul’s traffic came to the fore.  Time to skip the luxury van and start walking. Everyone was a trooper and fortunately, the walk wasn’t too far or too steep.  Making it to the back side of the famous Hagia Sofia we had a discussion of how this massive and architectural marvel Byzantine church for centuries was converted to a mosque, then a secular museum, and then – again with my pushing the issue – how Erdogan converted it back to a mosque…making a political statement that he demands religion be more forward in Turkish society (which has been strongly secular as installed by Turkey’s savior, Ataturk)…in order to garner more of the rural conservative vote.

We were to visit Hagia Sofia, but the line was incredibly long…like longer than I have seen anywhere at any time. The guides, who were also shocked, call it “The Costa Effect”, named after the huge numbers of tourists dumped into Istanbul on a daily basis by large Costa Cruise Line (and other) ships.  So a bit of a change of plans…

We visited what has been one of my favorite sites: Yerebatan Saray (the Underground Palace) which was actually one of the many cisterns the Romans built to store water. It has recently undergone a restoration which included the installation of a very interesting art experience.  I still really enjoy it, but – again – the crowds were crazy so being able to take a moment to appreciate it all was difficult if not impossible. 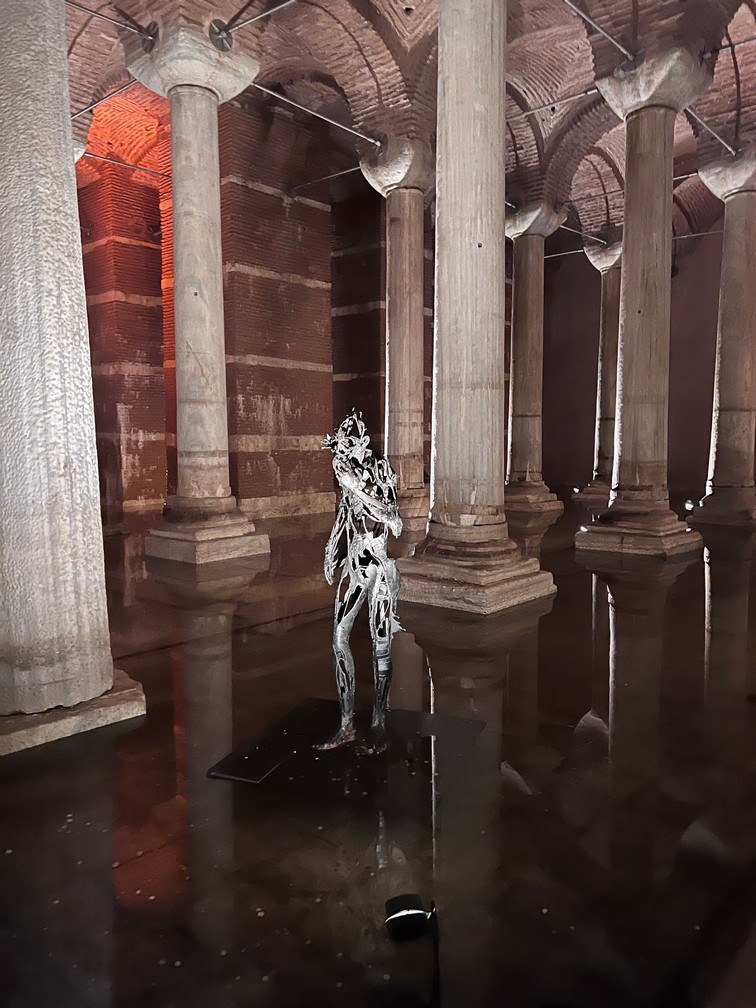 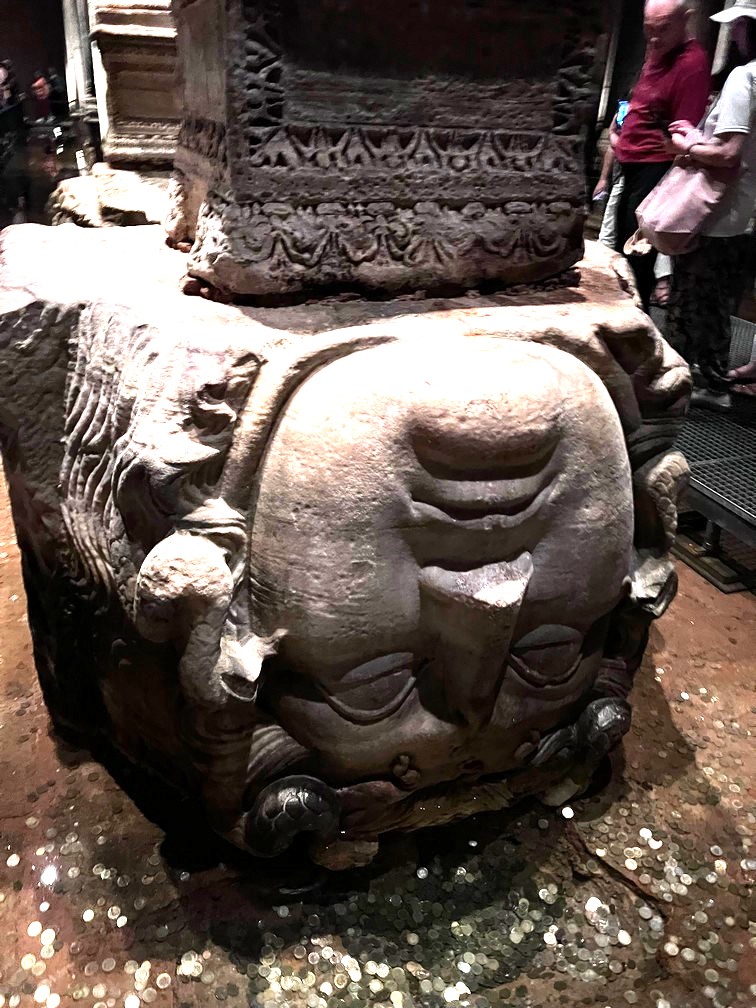 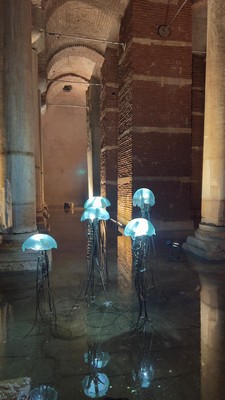 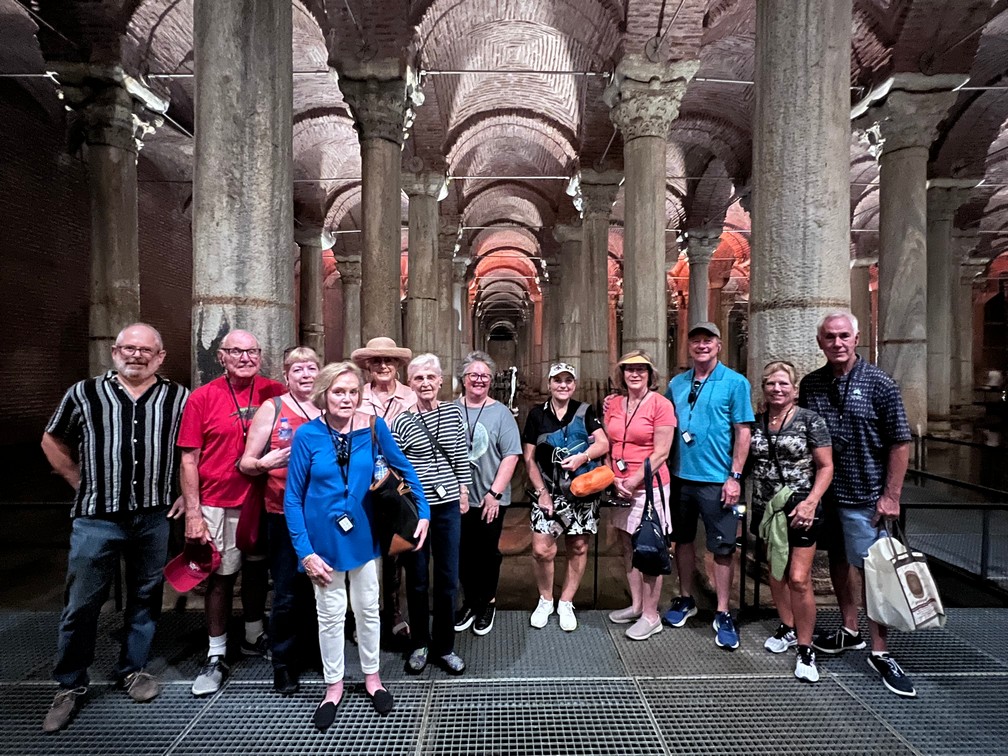 Rather than fighting more crowds, we decided to take a break at a spot high above the Old City for a cool drink on a hot day. I warned everyone not to order a cocktail or beer because the next big event was about to happen! 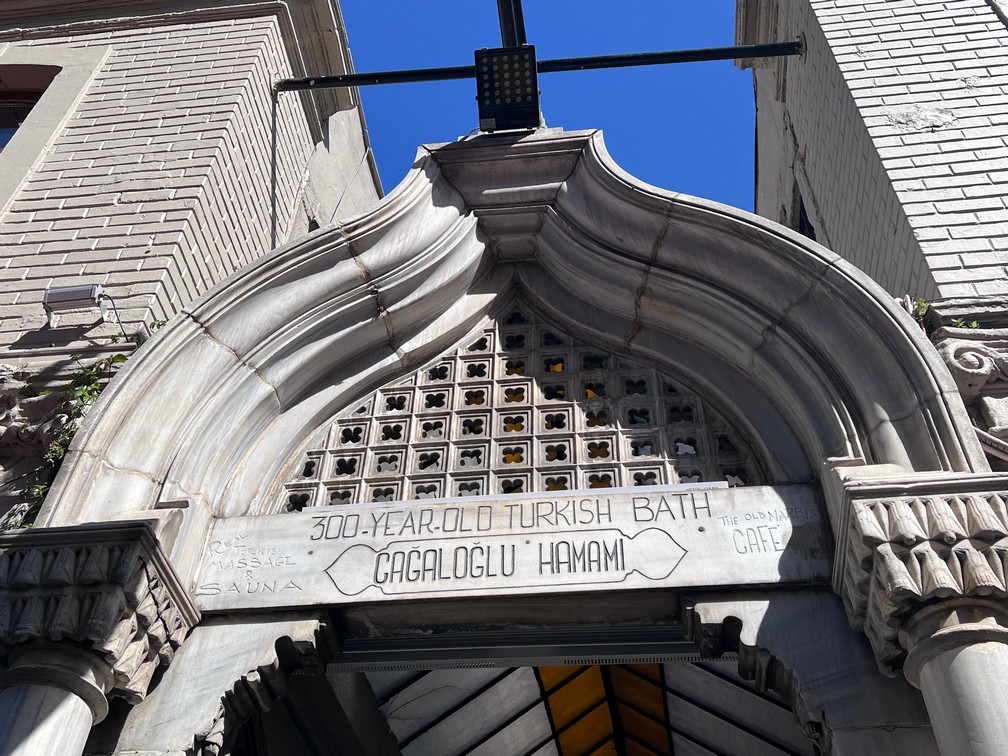 After a short walk, we entered Cagaloglu Hamami, a 300+-year-old Turkish bath. But not (at least not yet) for that. We were headed to Lokanta 741 for an amazing Turkish Luncheon with paired wines. Located within the walls of the hamam in an al fresco setting, it was beautifully set up. 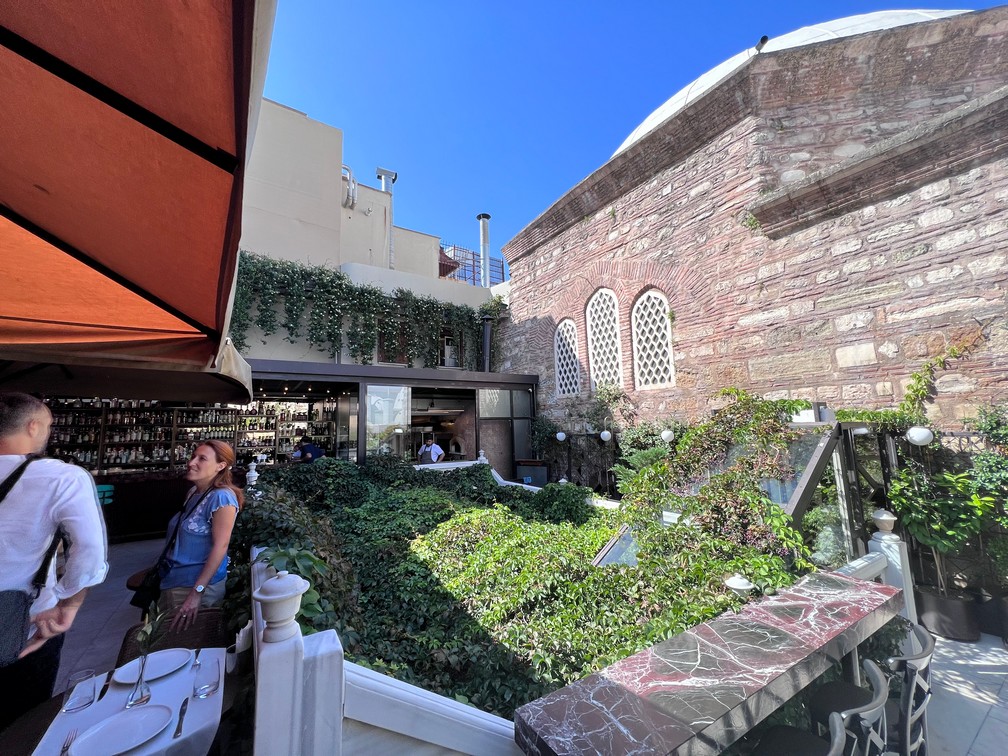 I immediately had a chat with the manager about selecting Turkish wines. I mean I knew enough to be dangerous, but not enough to be an expert. When I asked him how well he knew the wine list, he said, “Very well. I made the list!”  And we had fun selecting the wines based on what dishes were coming out next. 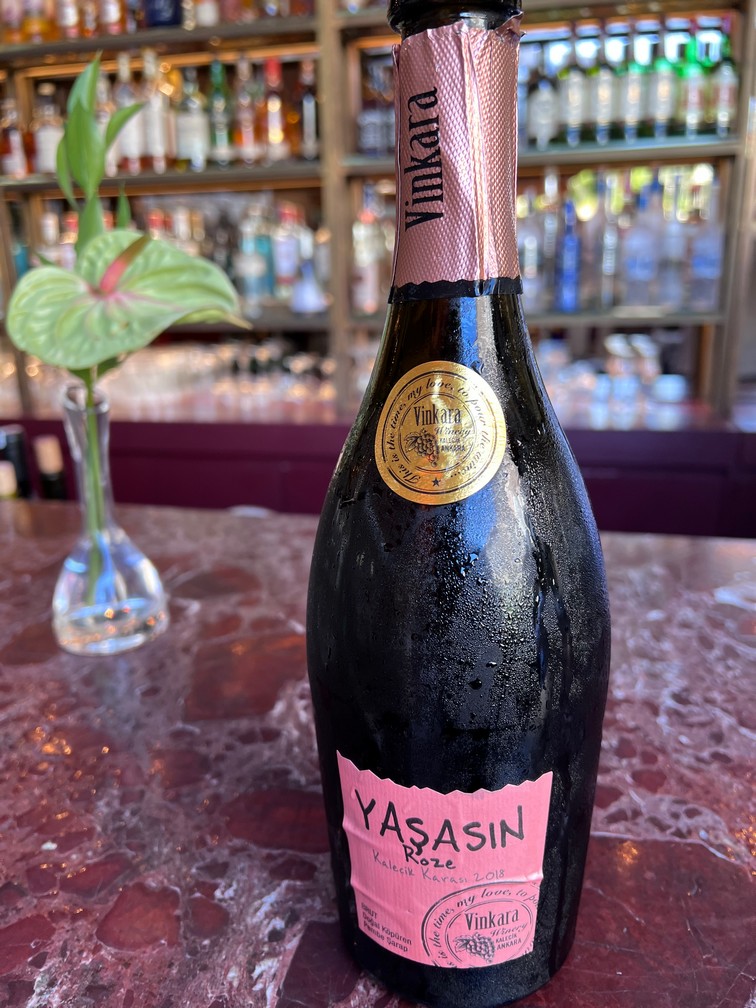 Before the culinary onslaught, we started with a toast to our C&C with a Turkish sparking wine: Yasasin Roze made with Kalecik Karasi grapes from central Turkey near its capital, Ankara. It was OK and got the job done, but wasn’t a favorite. 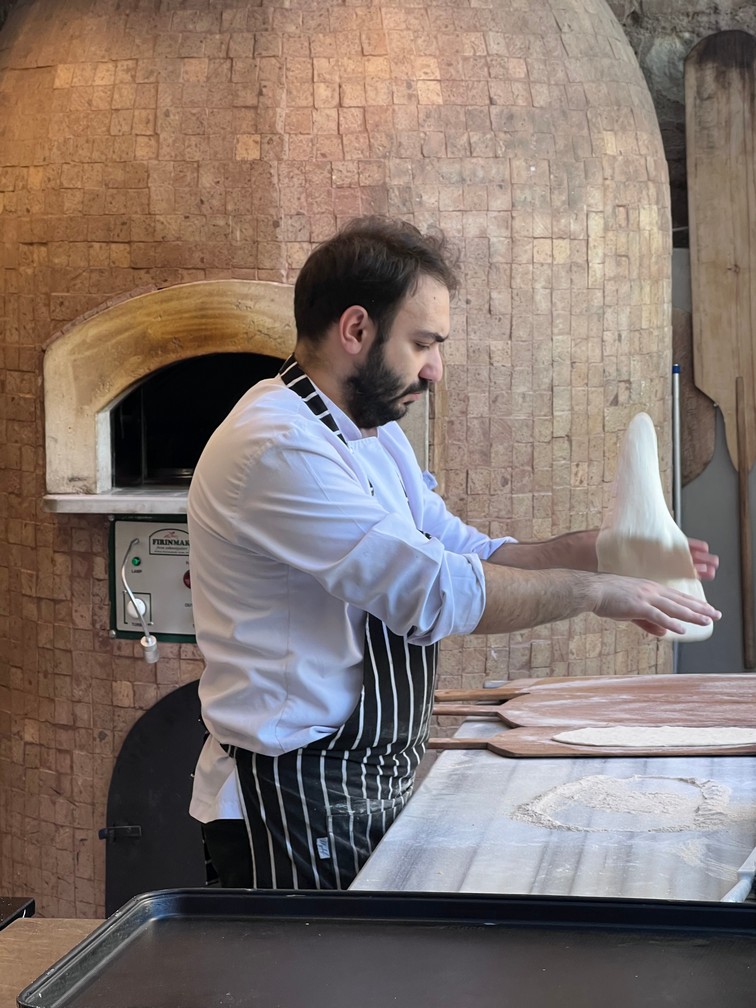 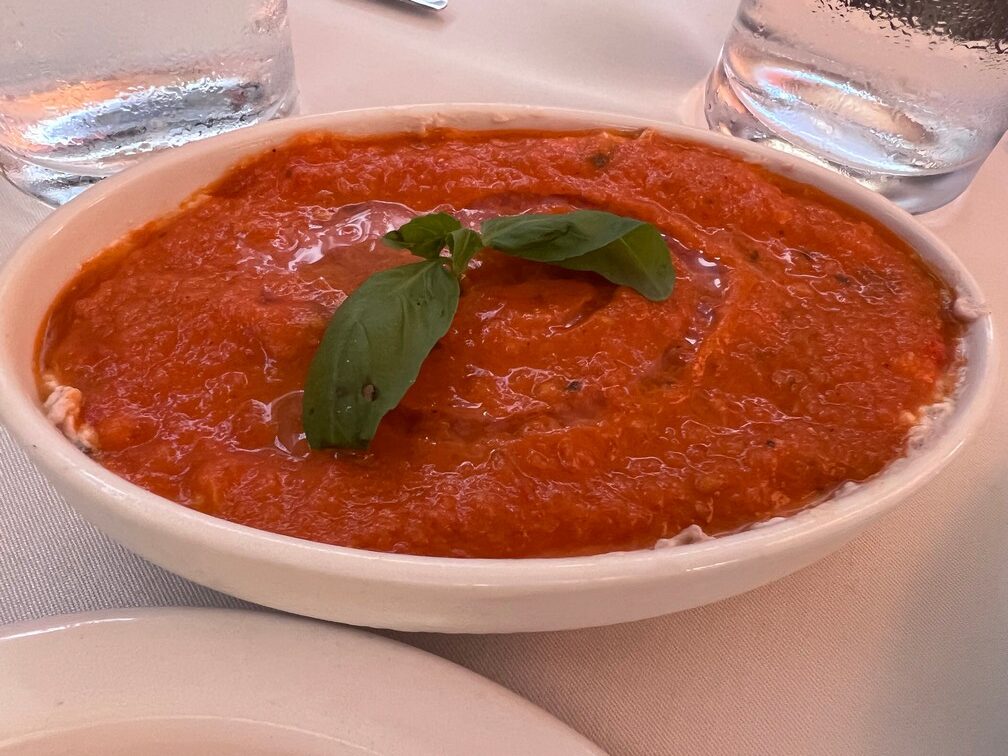 And then things really got started.  Over the course of the next hour or so, over a dozen dishes were served. First were cold meze (starters): 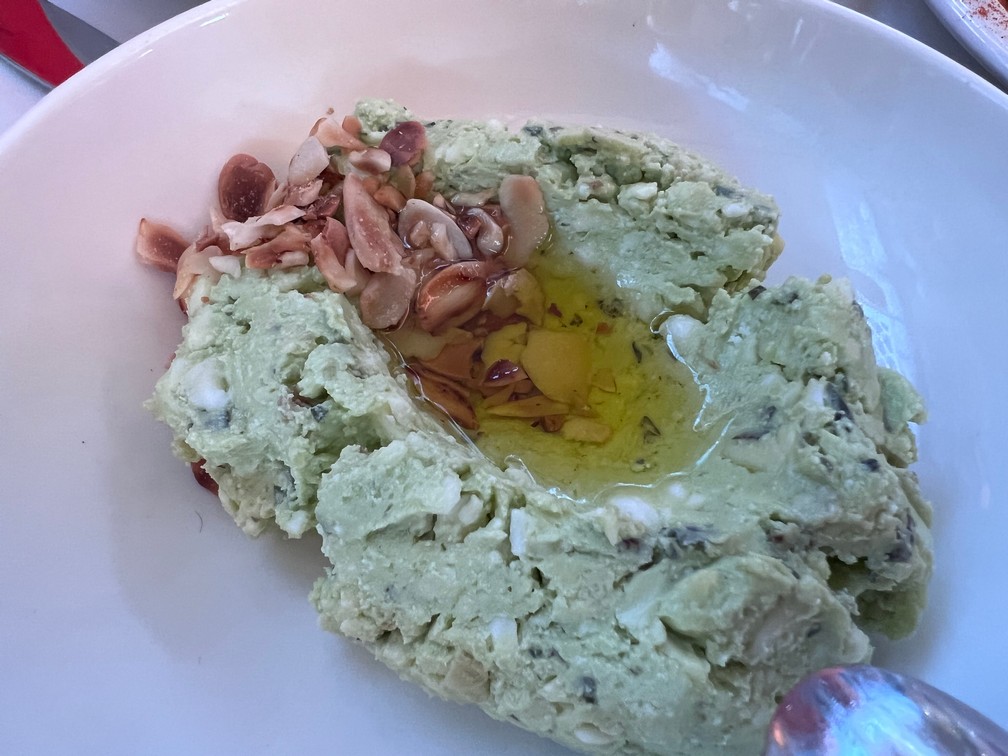 I paired them with two white wines (offered at the appropriate times): 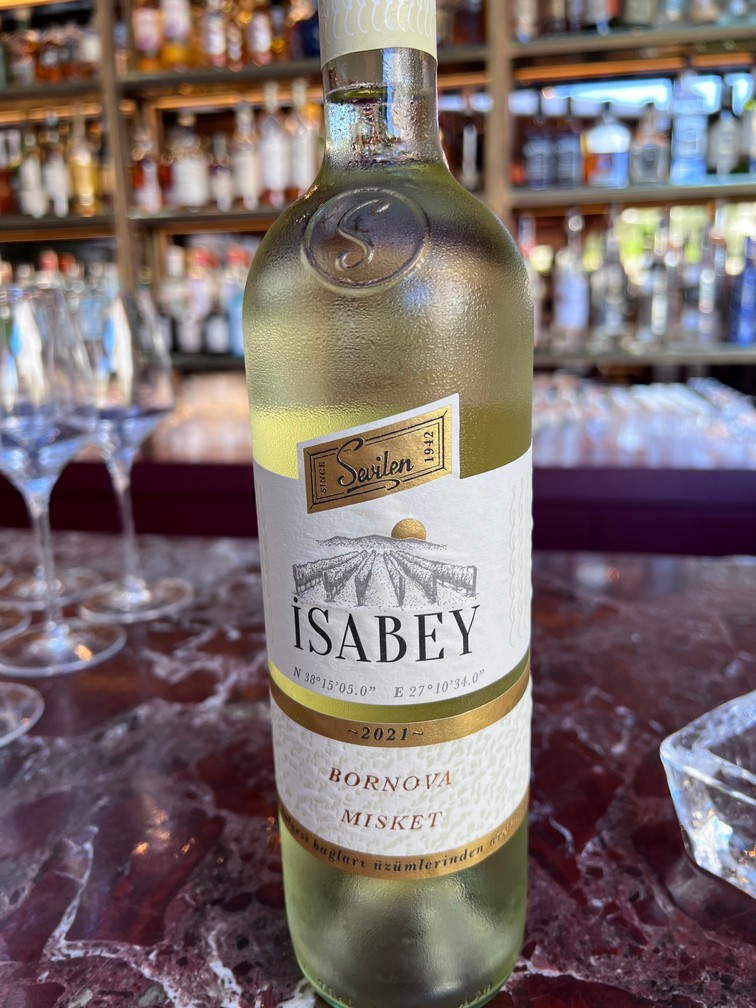 Isabey Bornova Misket (a grape that originates in Turkey’s neighbor, Bulgaria) and then 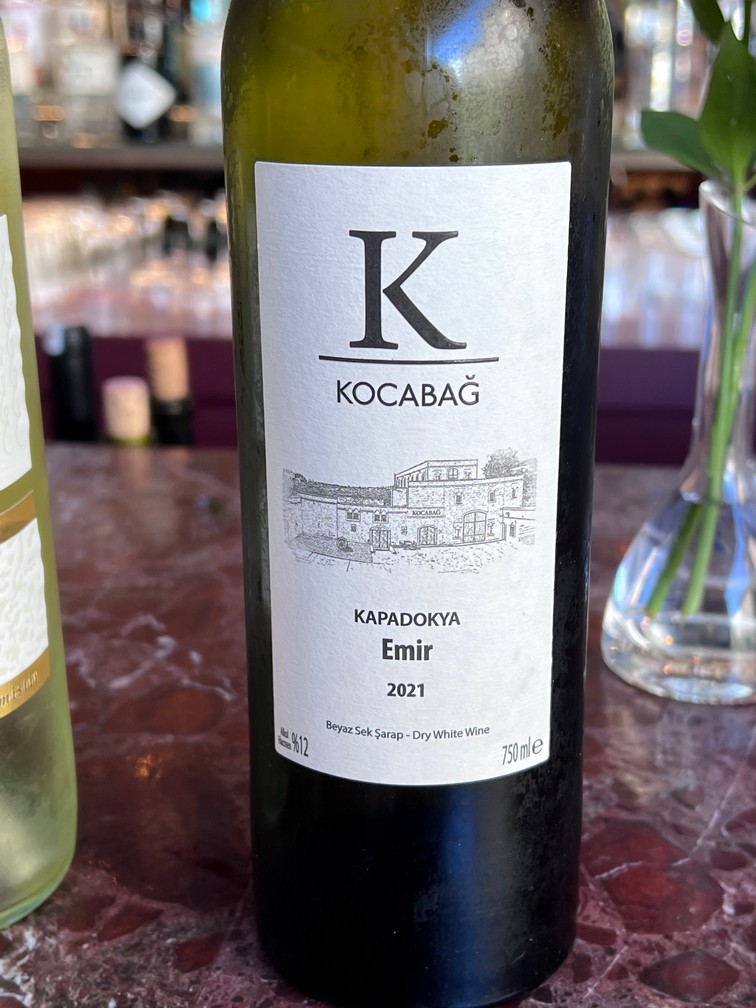 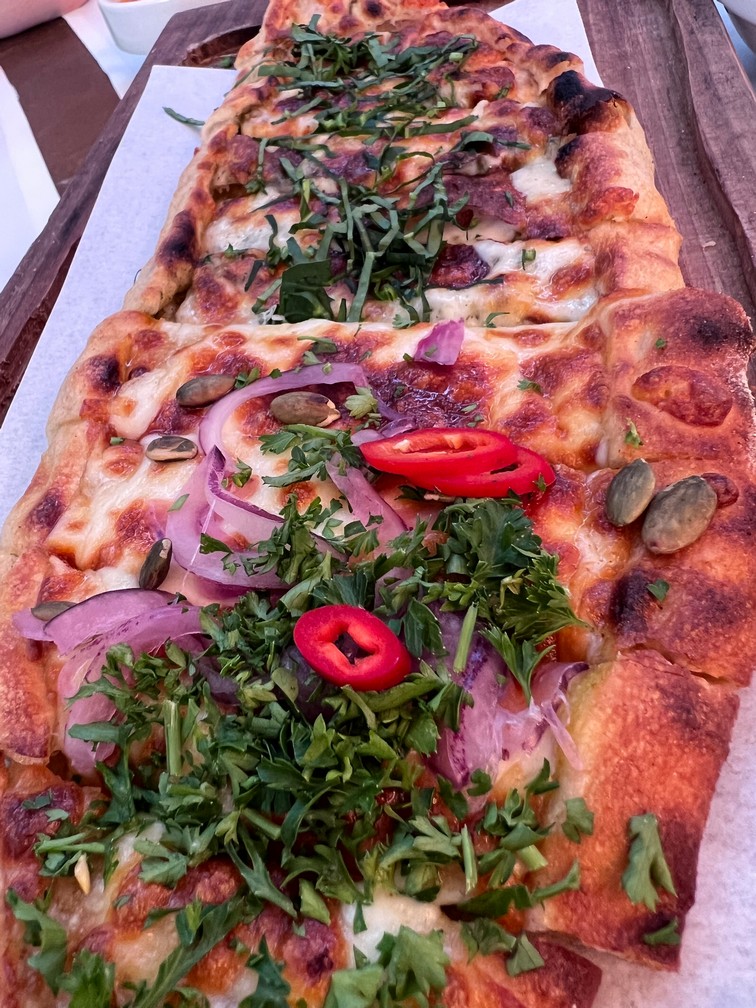 It was then time for some Pide, also known as Turkish pizza. There is a very close relationship between Turkish and Italian cuisines due to the travels of some guy named Marco Polo and his brethren involved in the spice and silk trade.   Four varieties were severed. 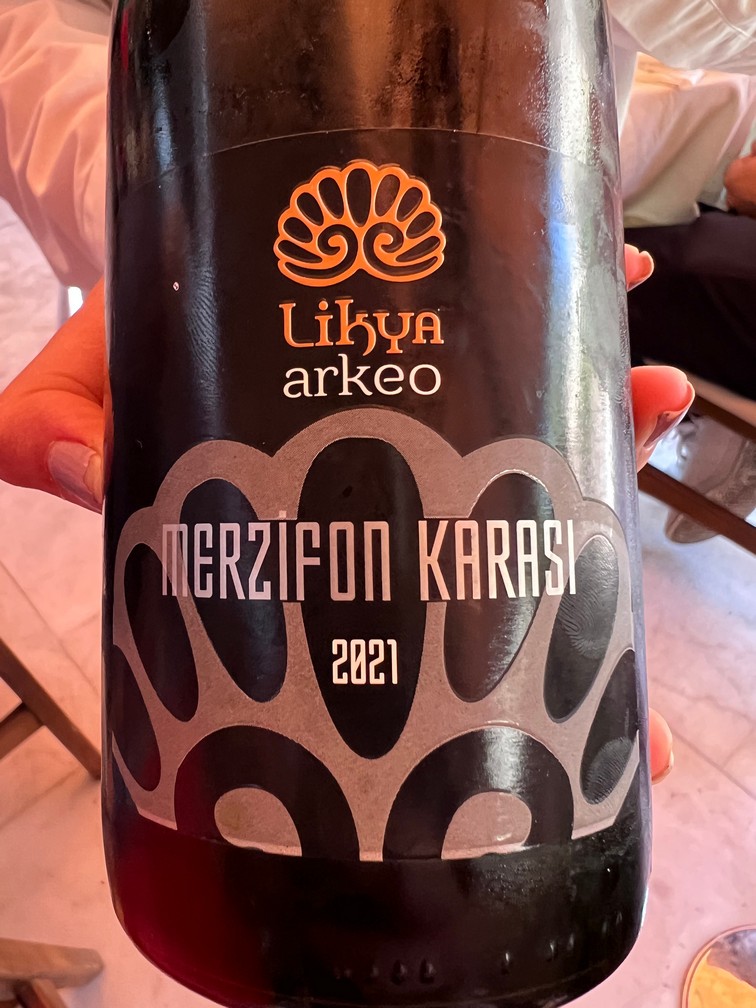 It was time to switch to some red wines. With some assistance, I paired them with Likya Arkeo Merzifon Karasi, a light, fairly fruity, but still substantial, wine from Antalya (southern Turkey along its Turquoise Coast).

After that culinary break it was time for one of my favorites: Lamb kebabs (minced lamb) with garlic, spices and with (or without) pistachios.  I was so excited and enjoyed them so much I forgot to photograph them! 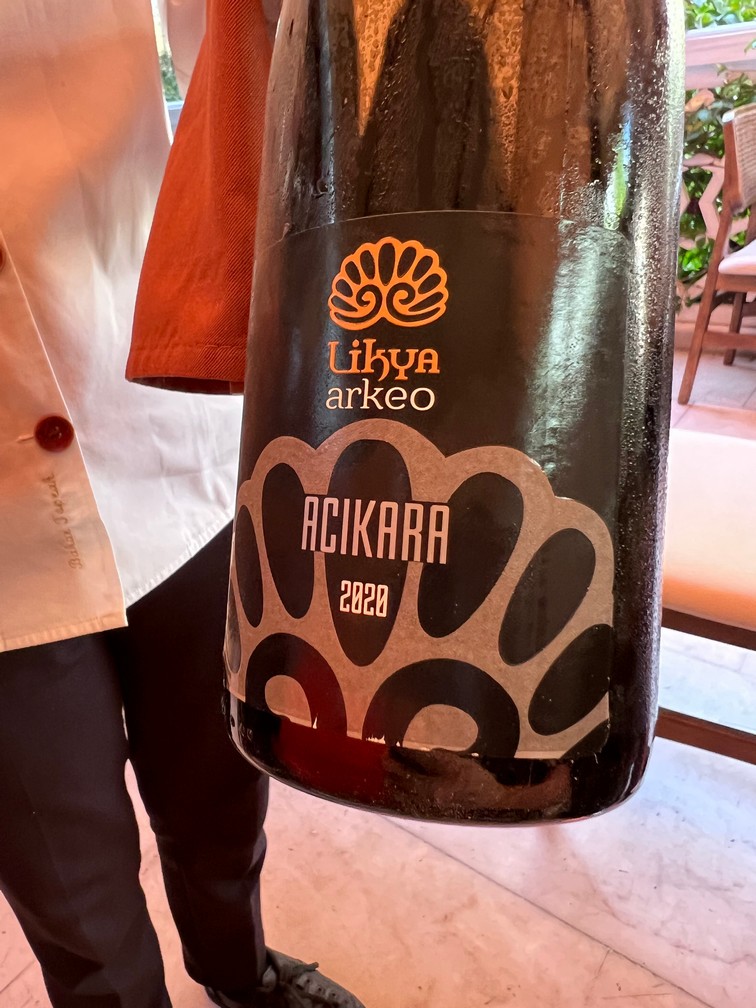 They paired nicely with  Lika Arkeo Acikara, a bigger, bolder, red with black cherry notes with a fairly high acidity; also from the Antalya region.

But we were not done. Also pairing with the last wine were lamb and lamb liver kebabs. Personally, I love liver and found it delicious. Most were not fans, but loved the lamb.

We finished up with a variety of desserts. In addition to the requisite Baklava, there was a delicious creamy Rice Pudding with wonderfully charred skin and Tahini Custard with Crispy Pumpkin; a new favorite of mine! 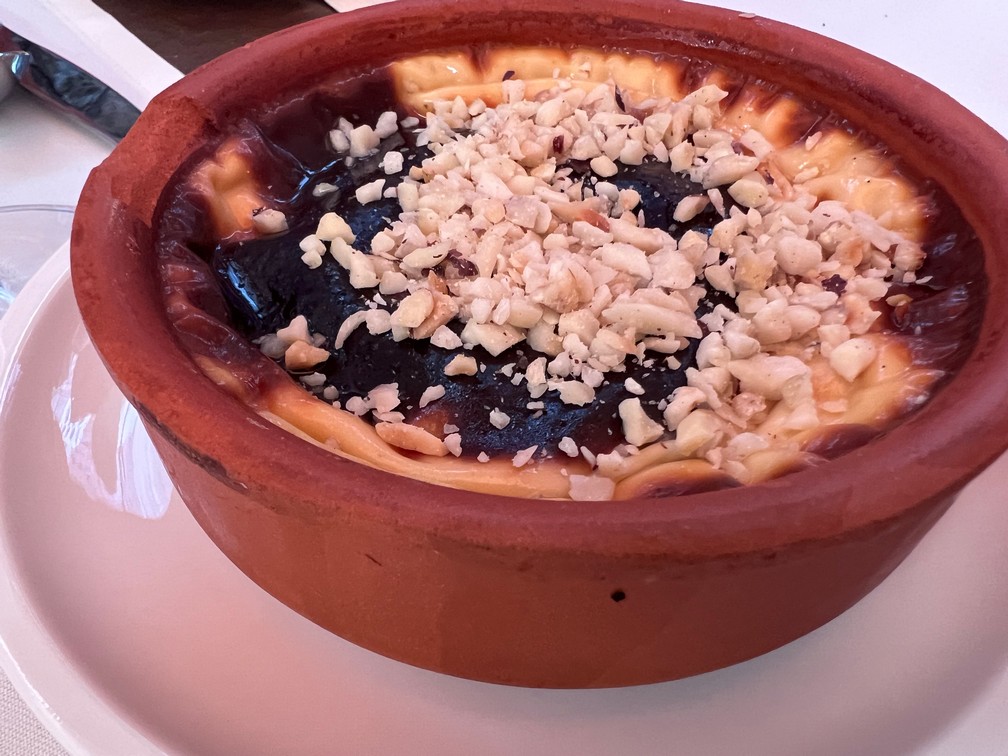 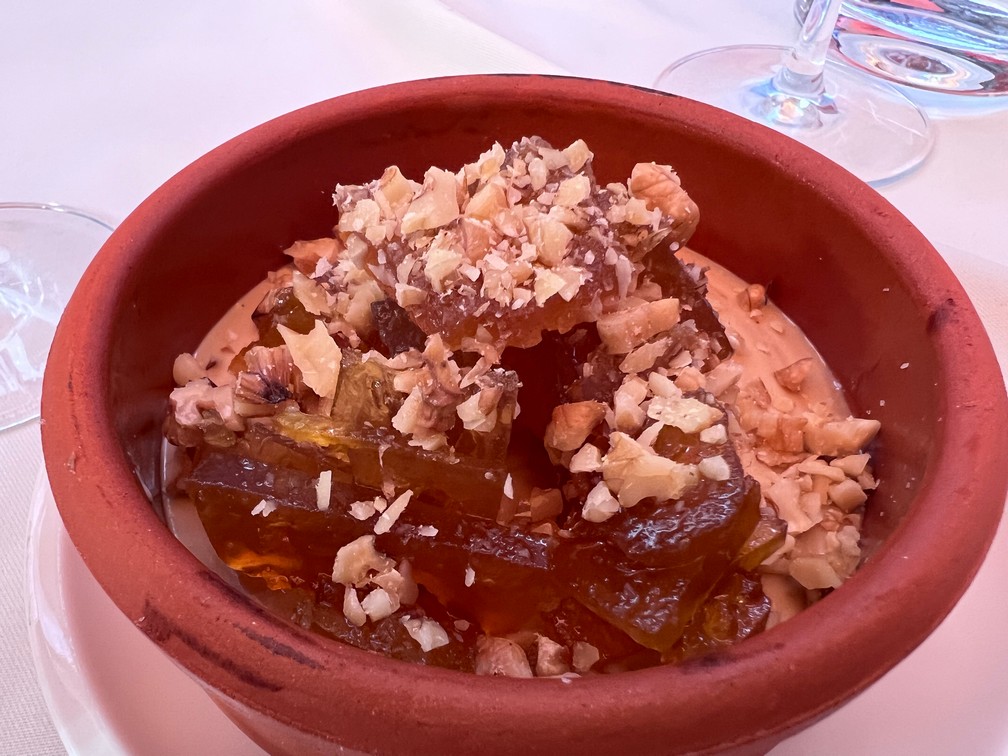 My last pairing was a sweet wine, Urla Symposium, also made with misket grapes. 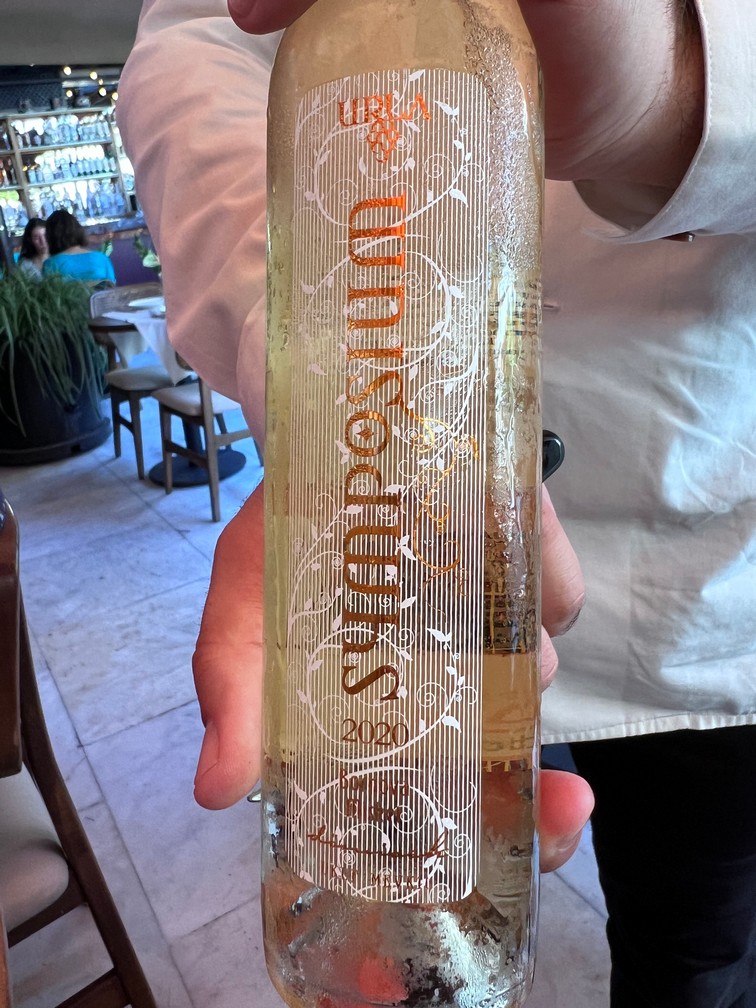 After a brief pause our group broke up into three groups: Hamam, Grand Bazaar, Nap back at the hotel; all of which were very close by.

I headed to the hamam along with four others.  I had been there a few times before; the first time being – I hate to say it – was 29 years ago!  It was definitely more crowded (but not overly so) and the experience was shorter (about 1.5 hours vs. half a day), but I still loved it. 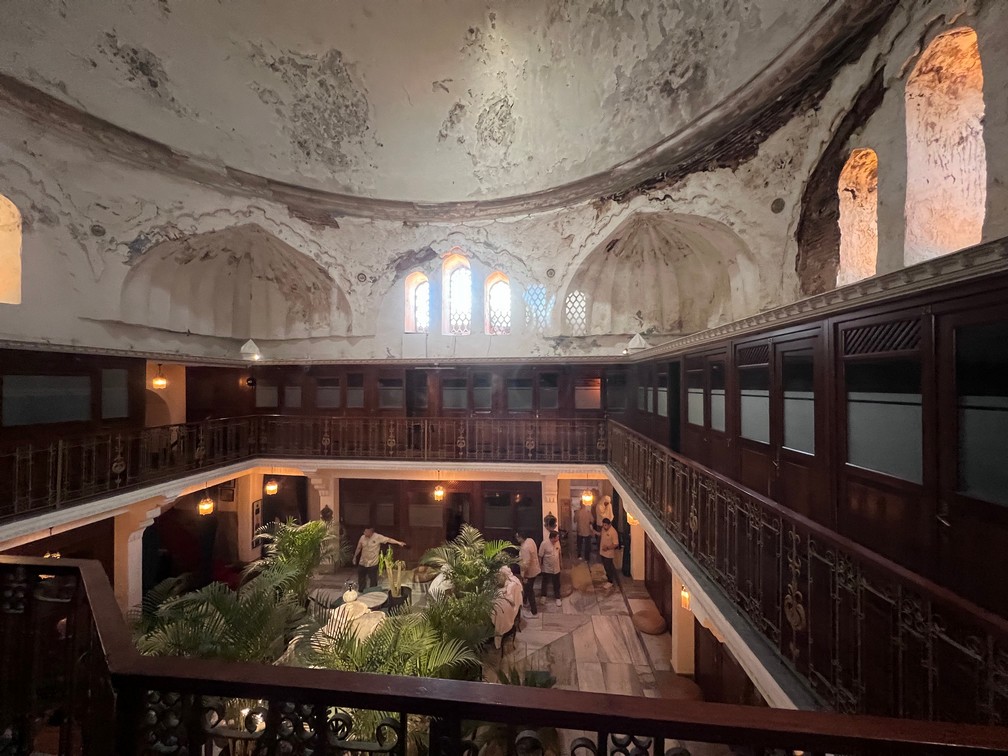 It started with sitting in a hot sauna to open up your pores and relax your muscles. (The hamam’s heat source remains the burning of pistachio shells…as it has been for its entire 300+ year history.)  Then a burly man walks in a shouts, “Eric. Come with me!” OK!  He spoke little English and was all business, but still friendly (not scary? LOL) without many words being exchanged.

As I was joyfully getting scrubbed, pushed, beaten, and twisted while laying down on an ancient marble bench, with copious amounts of warm and cold water (always a shocker) were thrown over and at me from large buckets dipped into ancient sinks, not only did I feel great, but wished I could have this done in lieu of massages and chiropractors back home.  It was over too soon.

It was then back to the AJWA Sultanahmet Hotel for a short break before we all gathered for the final experience of the day: A Sema Service also known as The Whirling Dervishes.

Due to the incredible traffic (even for the driver and guides), what should have been a 15-30 minute drive was taking almost an hour. Telephone calls, options, wondering if we could walk (we couldn’t as it was too far) I was getting nervous and frustrated. But in the end, we literally just made it!

Unfortunately, due to being late, my guests really missed the setup, the context, and the meaning of what is really a religious expression.  It was frustrating…and not only to me, but as they say, “The show must go on.”

The music was, obviously, very Middle Eastern and, in many respects, very similar to Jewish music. The men, after a ritual start,  eventually start whirling with their long white robes creating beautiful circles, and their hands raised above their heads (one open to receive God’s blessings and one pointing to transfer them to the land), you get drawn in…at least I did.  But I also was wondering how they can spin for so long without getting dizzy and how they can keep their arms up at the same time.

Even though a good bit of the experience may have been lost for some, when the questions started after we returned to our van, I felt like this unique cultural experience did the best thing it could: It made my guests wonder. Imperfect…but still Perfect!

Next up:  Boarding the Windstar Star Legend!