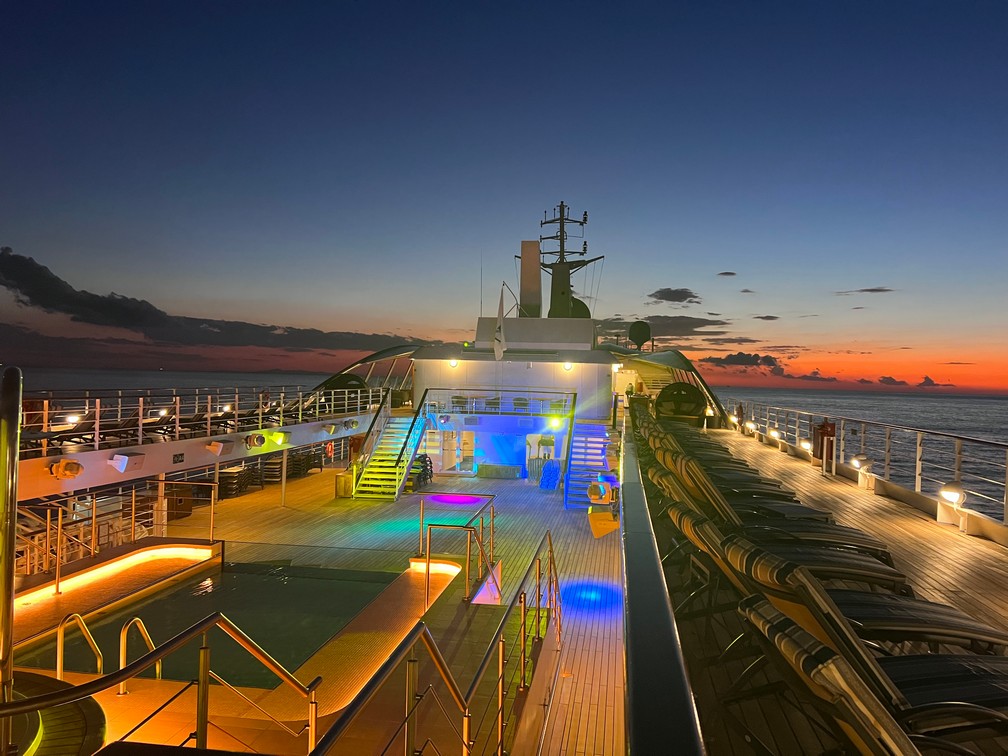 Between the Bosporus Cruise with a full Turkish Breakfast, the Hamam and Grand Bazaar experiences, the Turkish Luncheon with six paired Turkish wines, the Whirling Dervishes…and some canceled flights and luggage issues, it was a very exciting and full two days in Istanbul for Goldring Travel’s guests. Boarding the Star Legend brought some peace, tranquility, and rest. Ahhhhh.

I am not going to spend a lot of time discussing the Star Legend or the cruise experience she provides because I have recently done so in my articles about her sister ships, Star Breeze and Star Pride. But what is worth noting right up front is that the levels of service and cuisine are among the best in the business…and they are provided with a relaxed, caring, approach that is unrivaled. Seriously:  “Unrivaled”.

While all of the cruise lines are having staffing issues, Windstar (and a very few others) has extremely loyal staff because, well, they are treated with kindness and care by Windstar’s management and executives. Some other lines (including, for example, Seabourn) cannot retain their most senior staff and, in fact, have seemingly sought to terminate them in cost-cutting efforts. (Why pay top dollar when you can hire staff at a much lower cost.)  And, no I am not making this up; I am receiving communications from staff and follow their re-employment. 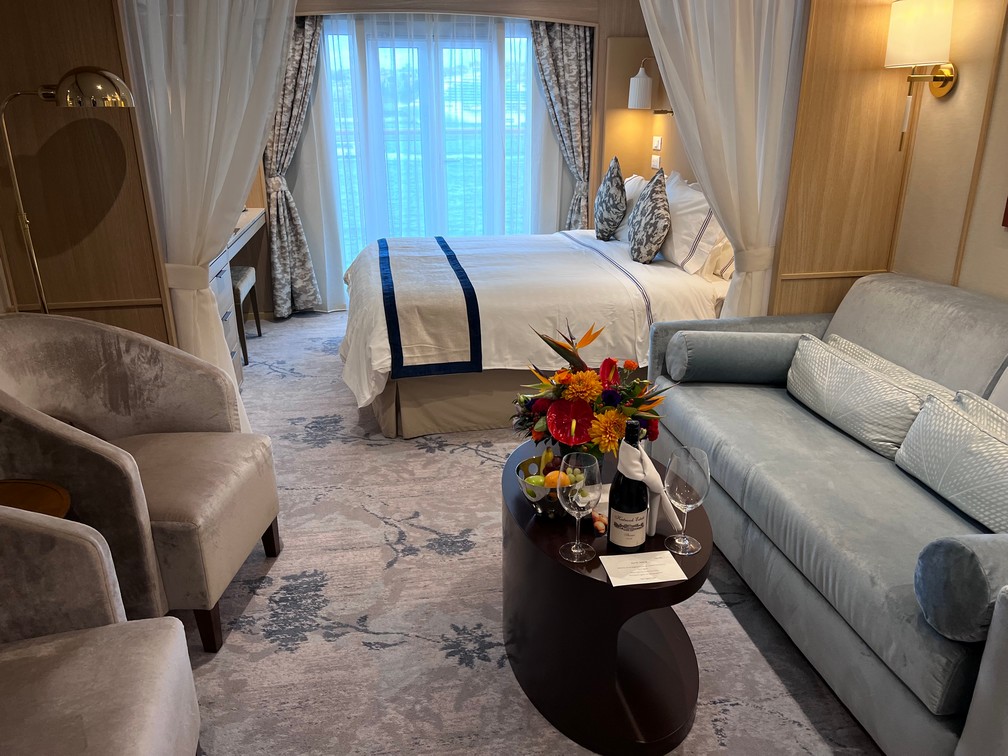 We have had a few changes in the itinerary; both for the Goldring Travel events and the cruise itself. I tend to be pretty free-flowing when it comes to changes and, thus, my guests usually are too. This time: So far, not so much.   I work very hard to make my Culinary & Cultural Experiences about “travel”; not ticking things off or keeping a strict schedule. I understand that some structure is needed, but so is flexibility and finding excitement in the changes, rather than conflict.

The reality is that everyone’s personal experiences with Covid have kinda changed how people deal with others and, for that matter, themselves. There is a sense of vulnerability that wasn’t quite to the fore, but now tends to be. FOMO (the fear of missing out) coupled with the need to be in control combine into a – for me – somewhat toxic cocktail that squeezes out some of the joy.  It is somewhat disheartening…but we have a long cruise and lots of time for things to swing back to what the Culinary & Cultural Cruises have been delivering since 2007.

Along those lines, we were to do our Private Shopping with the Chef in Bodrum, Turkey, but when Windstar’s Executive Chef (ex-Seabourn) inspected the market it didn’t meet Windstar’s health and quality standards, so it was moved to Kusadasi. Our original itinerary also had us with a Day at Sea and sailing through the Corinth Canal, but my goal of doing that was again crushed as Greece closed the canal to continue repairs just days before we were to be there. So gone are both, but we actually wound up with what I consider to be a better itinerary with full days in Monemvasia and Nafplion, Greece before continuing on to Athens.  In addition, our overnight in Rhodes has been changed to a midnight departure and a Day at Sea. Our time in Limassol remains the same, but we arrive earlier and depart at 3:00 PM.  Flexibility is, obviously, key!

Anyway, back to the journey!  Before boarding Windstar’s Star Legend, which I planned for about 1:30 PM – why not enjoy a bit more of Istanbul?! – I had a wonderful breakfast at the AJWA Sultanahmet Hotel, packed up, and then headed out for a wander around the Old City. As it was early on a Sunday there weren’t many stores open, but I am not really into shopping anymore.

I did find my way to the Egyptian Spice Market, which is always a riot of colors, smells, and a variety of different styles trying to coax you into their shops.  It also is great for people-watching! 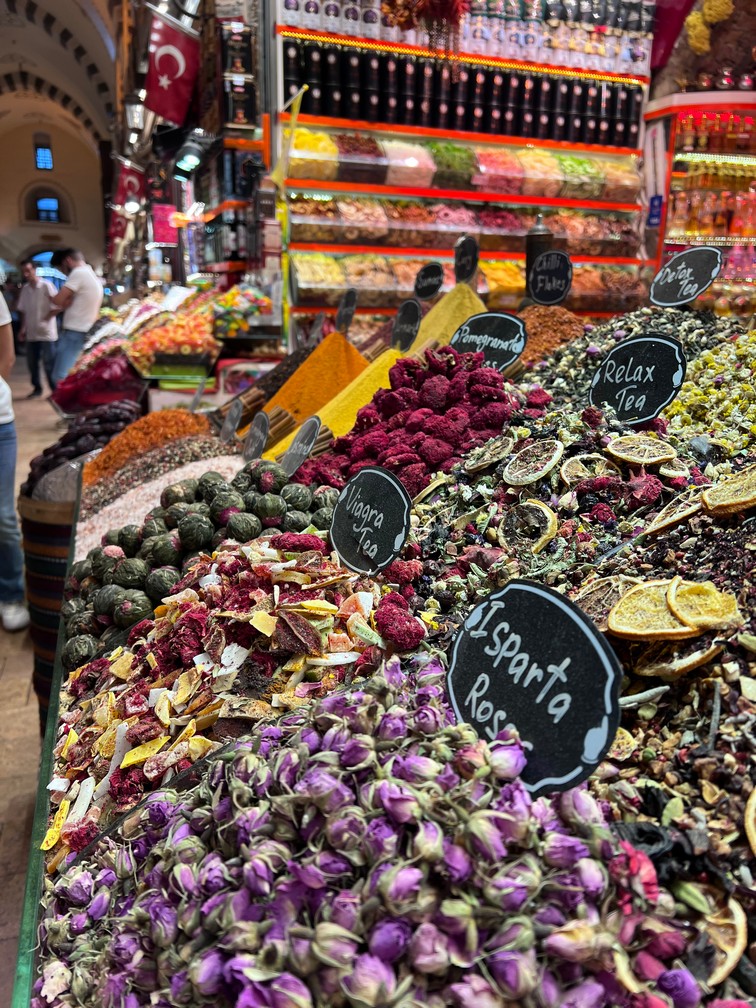 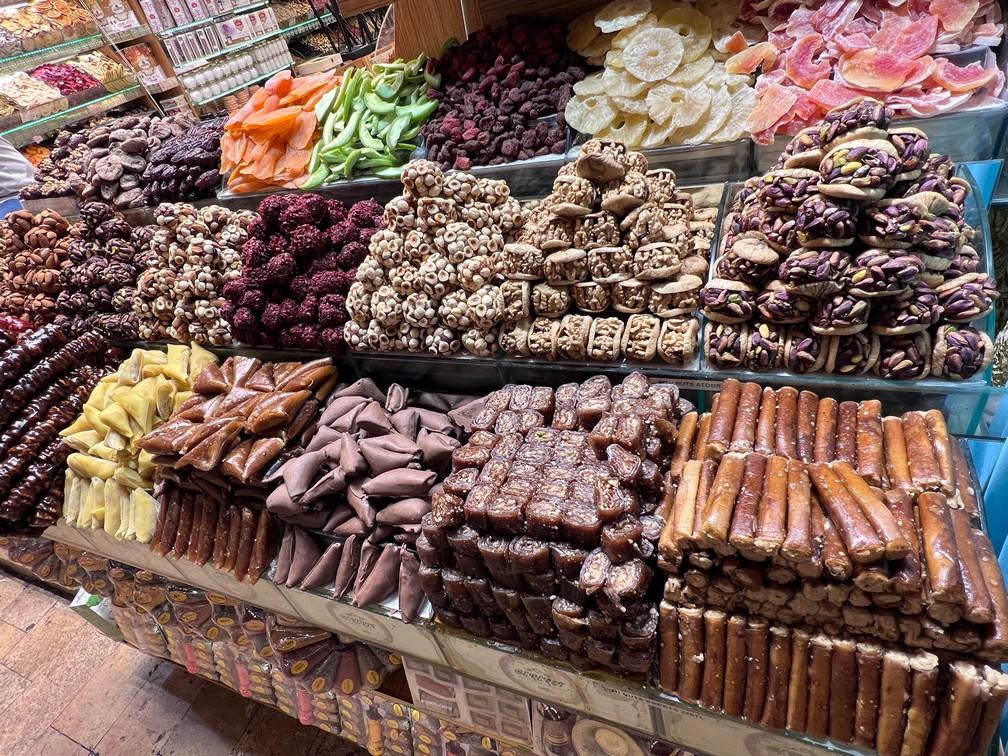 After about a half hour of that, I thought I would stroll back up the hill and see what else I could find of interest…And then the skies opened. I mean really opened. I did try to hide under a canopy for a while, but then I was like, “When is it so bad to walk in a warm rain?” and off I went, eventually winding back up at the hotel, where I dried off and snuck in a short nap before departing for the Star Legend.  (I was still full from a wonderful breakfast, so my idea of having another Turkish lunch was shelved.)

We were advised the day before embarkation that we were no longer embarking at Istanbul’s new cruise port, but rather at the very small and “rustic” pier in Istanbul’s Old City.  For me and my group that was great news as it was only 10 minutes from our hotel.  (A US$5.00 taxi or a $100 private transfer.  I went with the taxi…as I almost always do.) With very limited facilities, the boarding process was just a bit chaotic, but still efficient and I was onboard with lots of smiles and hellos very quickly.

After a few meetings with Joseph, the Executive Chef – who I worked with at Seabourn – to organize the upcoming Shopping with the Chef in Kusadasi and the Interactive Cooking Demonstration, it was time to say hello to my guests and for dinner at Candles. 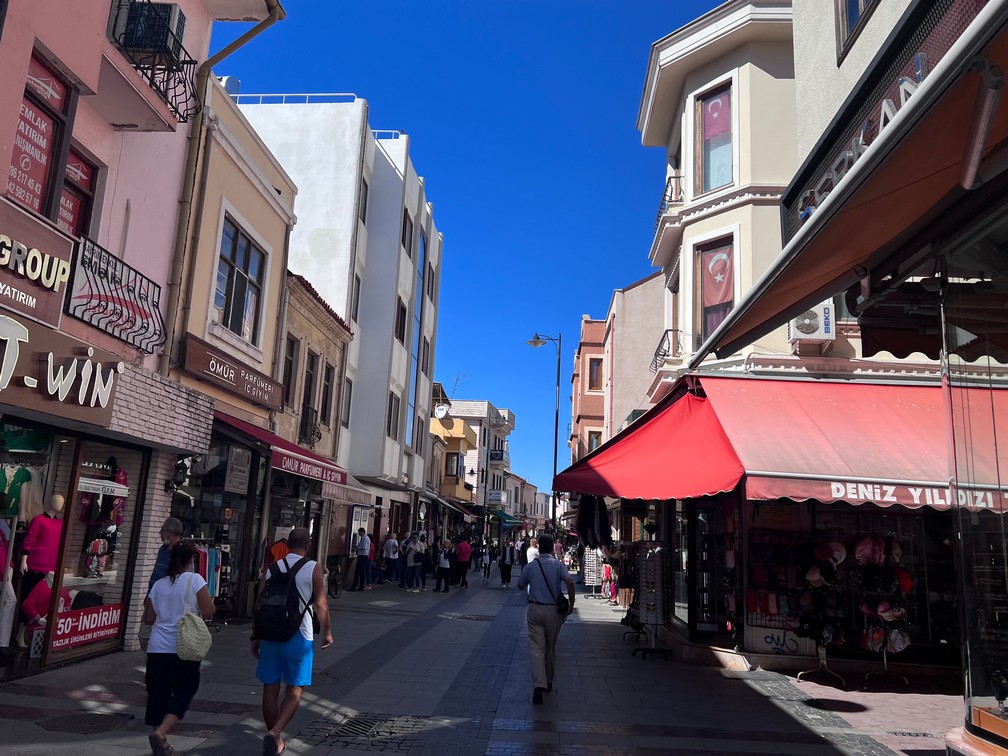 Our first port was Canakkale, Turkey. While most folks were off to Gallipoli or Troy, I headed into Canakkale proper.  It was a surprisingly long ride (about 30 minutes).  My goal was to find some Turkish wines for events later in the cruise. Successfully accomplishing that in my first 15 minutes (who knew?!), I asked the woman where the best place was for real Turkish food. She advised that with all the tourists most of the restaurants weren’t very good, but there was a little place right across from the bus stop called Bombaci.

Well, you know where I went…wine-bottle-filled Goldring Travel backpack in tow, right?  This was definitely a local’s place with worn barren tables with matching menus.  I looked up at the menu high up on the wall above the kitchen and saw this ominous-looking man, Mr. Bombaci, staring down at me. 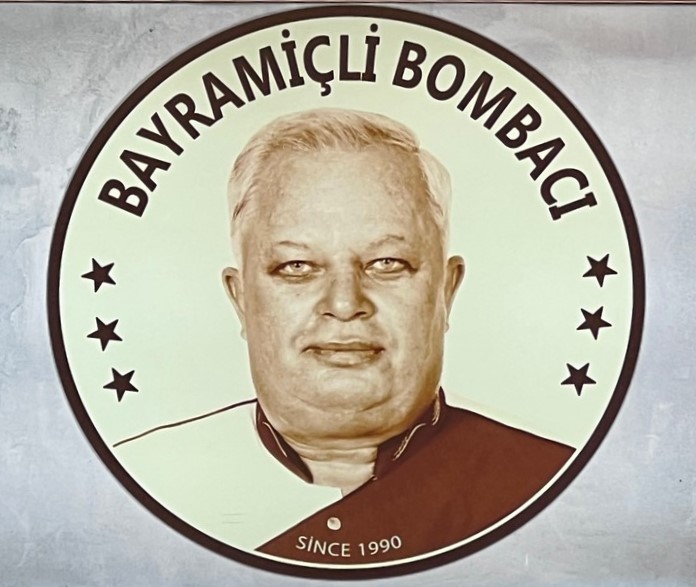 After reviewing the menu, I decided on a Doner Kebab wrap and one of my favorites, Kofte (miniature lamb burgers in a rich tomato and yogurt sauce over bits of pita bread).  When this gentle, slightly disheveled (in a charming way) man came to take my order I realized it was the same guy.  Whew! 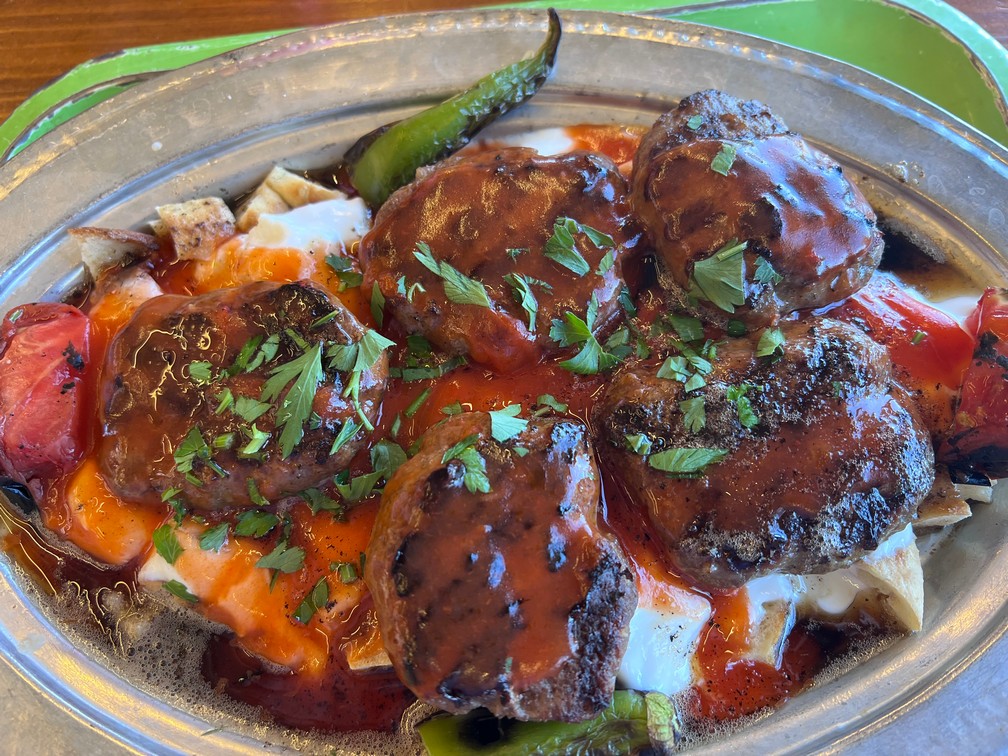 My lunch was fantastic, as was the people-watching.

And then I went to pay the bill.  Neither he nor his wife could figure out how to use the credit card machine, so the line to pay was backing up.  (Clearly, this is not what they normally do. LOL).  I showed him cash and this originally ominous-looking man turned into a thankful puppy.  Charming…and worth the 30-minute bus ride!

After a wonderful chat with the young local tour guide at the bus stop (she is Turkish and her boyfriend is German and living in the Netherlands…so it was about her relationship and some “fatherly advise”: Dump Him!), it was back to the Star Legend for a spectacular sunset, dinner and late-night cocktails. 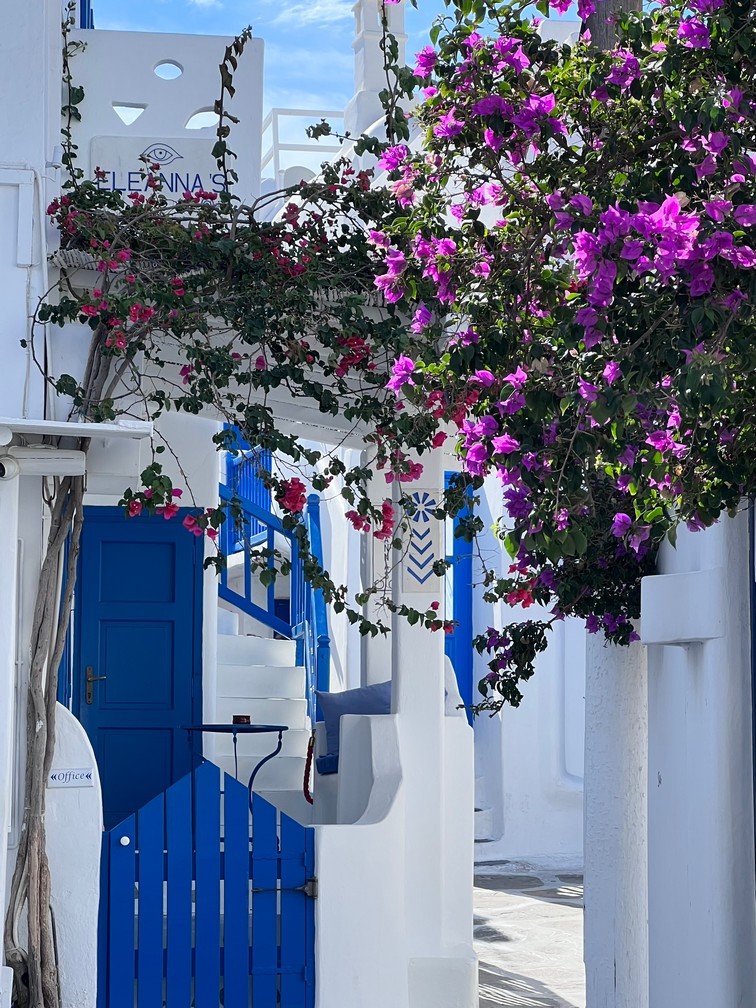 The next day was Mykonos. Unfortunately, it was very windy, so my plan of heading to Paradise Beach was nixed. So, I wandered the town for a while, bought a gift for my daughter and Southside’s surrogate mom, and then back on the ship for a well-deserved lunch and a nap.  (I will be back in Mykonos later in this journey.) 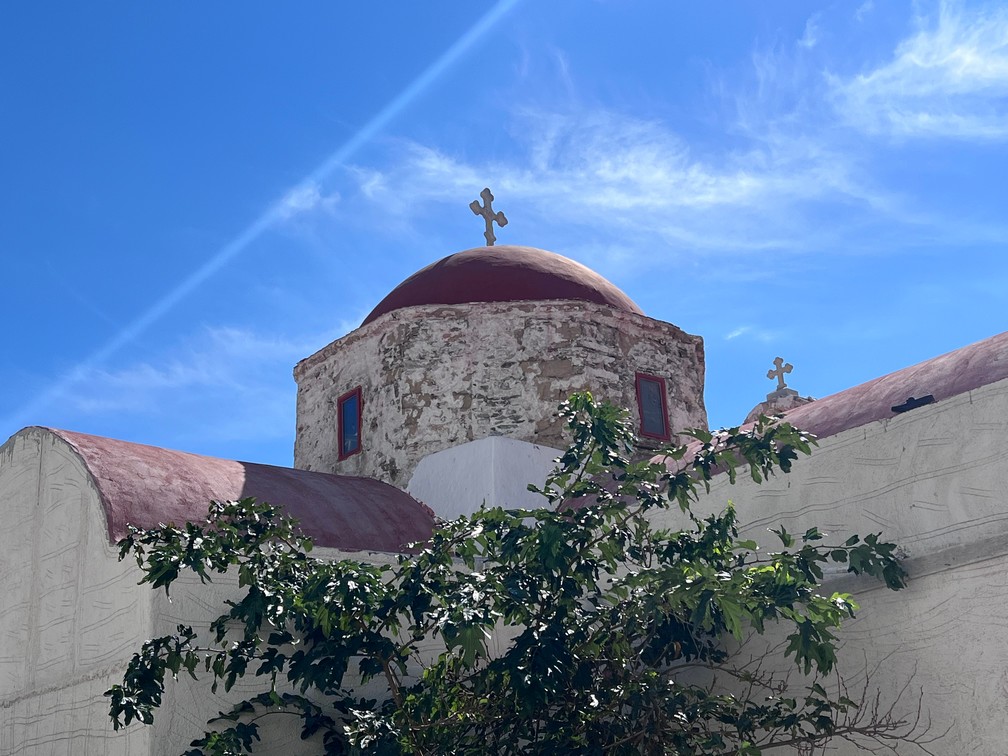 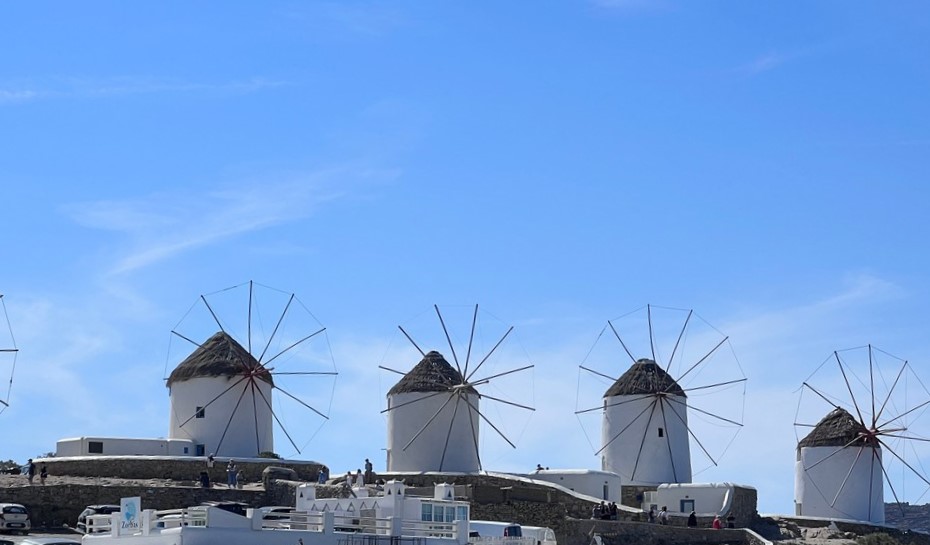 Kusadasi, Turkey is always a favorite port with so much to do, and this time it, again, did not disappoint. Windstar and I originally planned to do our Private Shopping with Windstar’s Executive Chef the following day, in Bodrum, Turkey, but between some sanitary issues and the market suffering post-Covid, it was decided that Kusadasi was it.  This initially created some conflict with those going on tours to Ephesus, but with a little creativity, the conflict was eliminated.

Chef Joseph was excited as this was Windstar’s first Shopping with the Chef since Covid. Chef definitely was at the top of his game with enthusiasm and information. 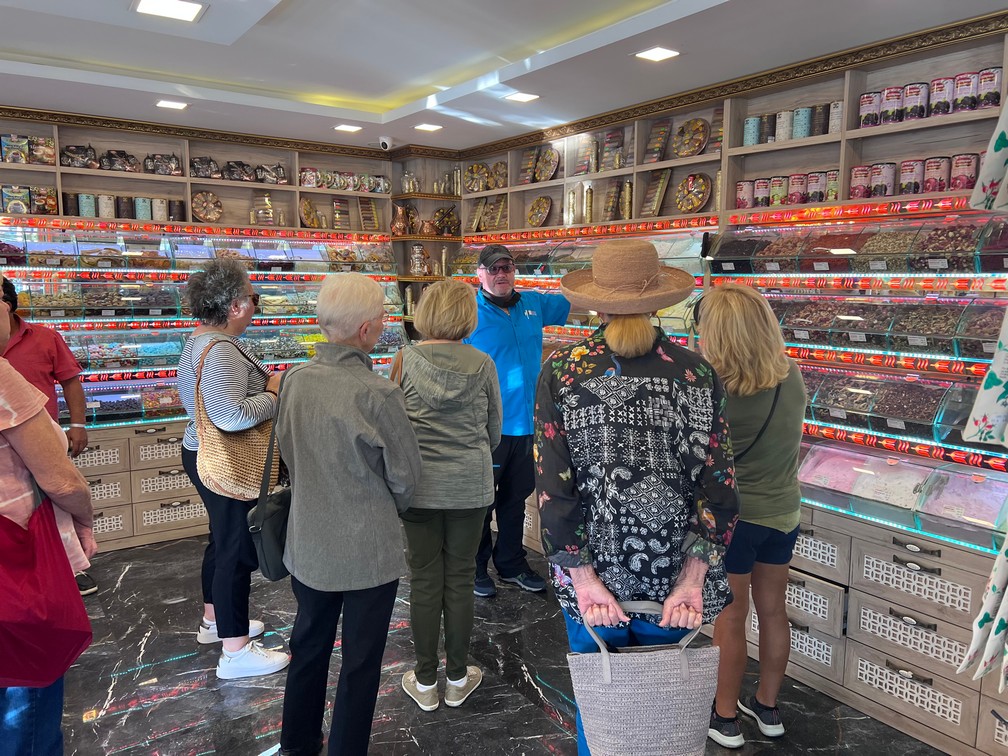 We started out at a spice and sweet shop right at the port. Lots of samples of lokum (Turkish delight) – noting to never buy the boxed stuff as it is artificially sweetened to make up for the lesser ingredients – and a discussion of saffron. 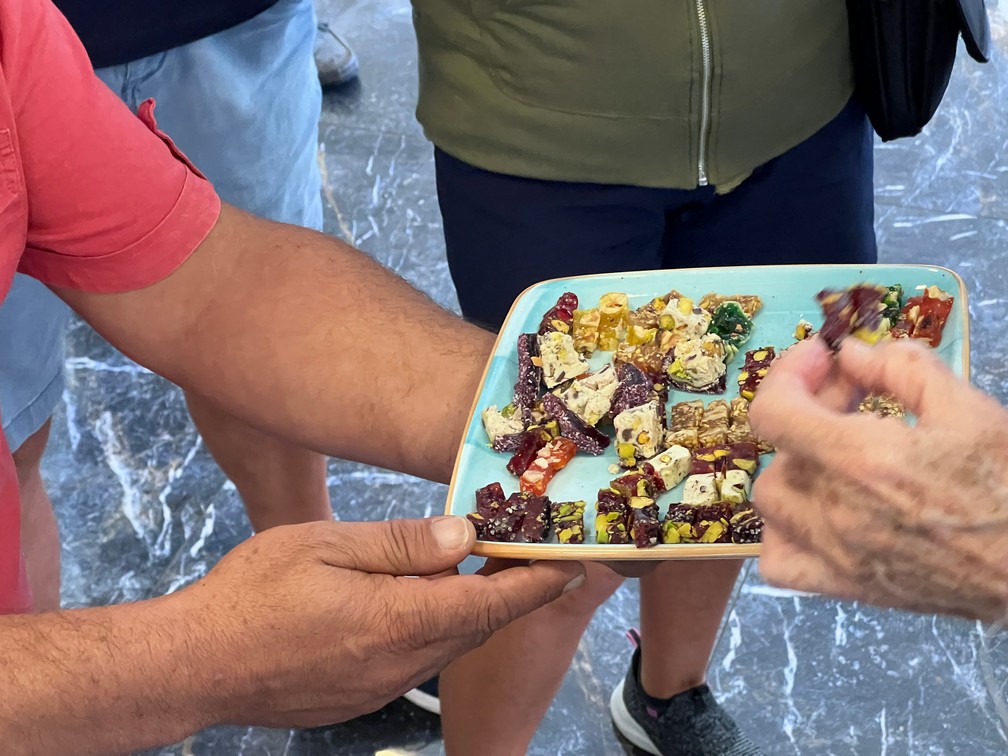 And, of course, when we got to the fish market I was in my glory as well:  “How about some of those Blue Crabs?  Red mullet an option?” One of my guests desperately wanted calamari; not a problem! 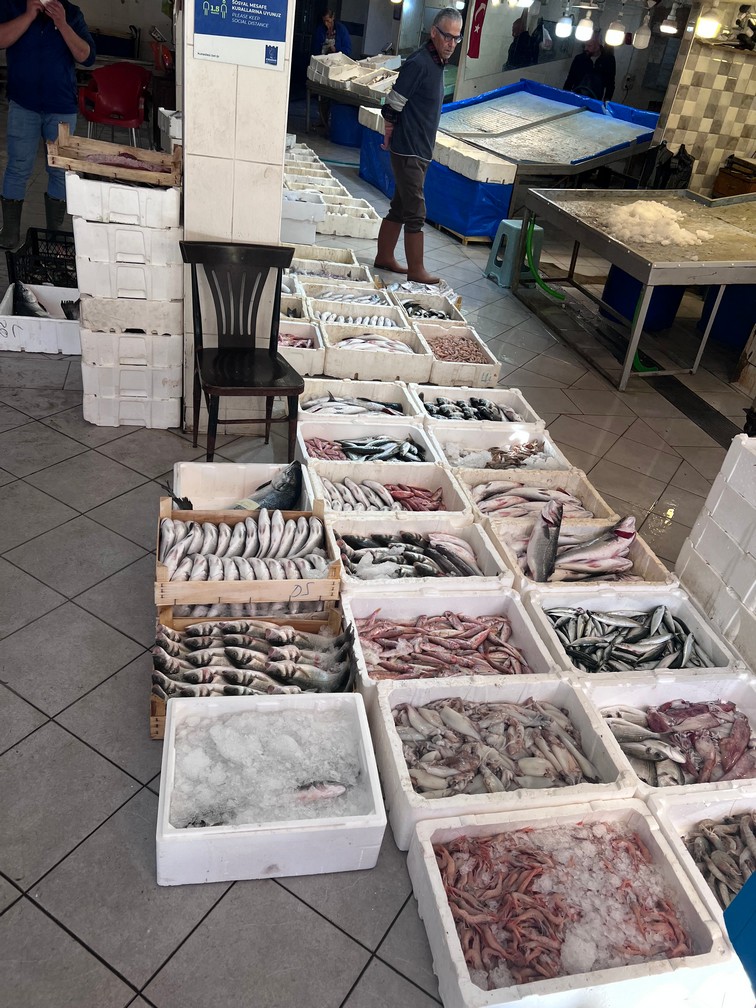 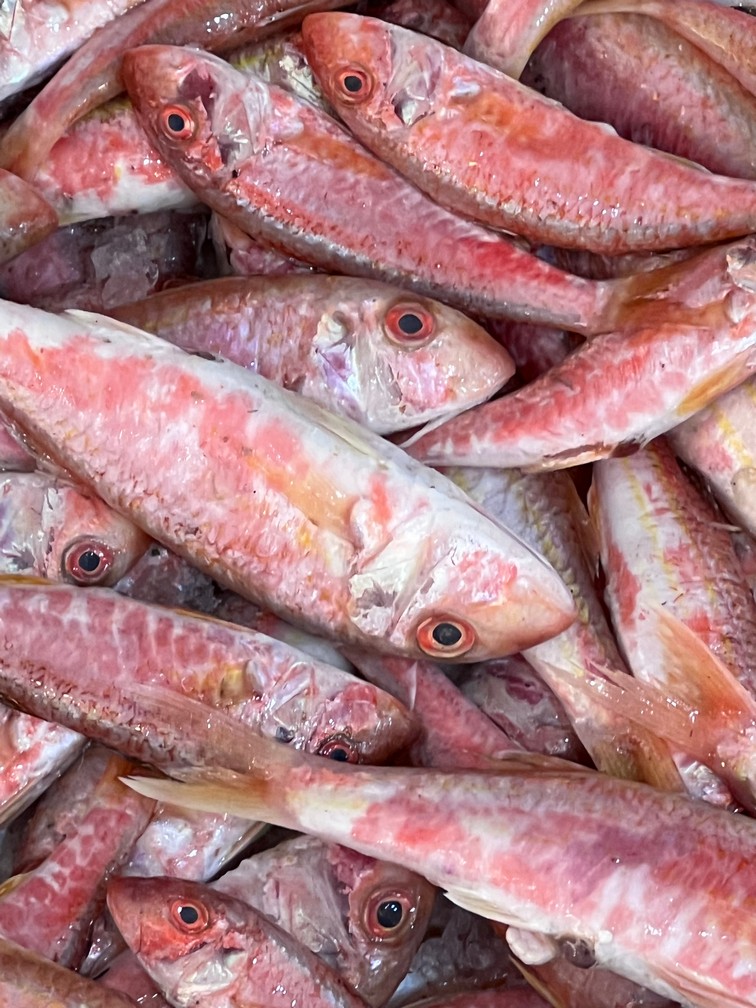 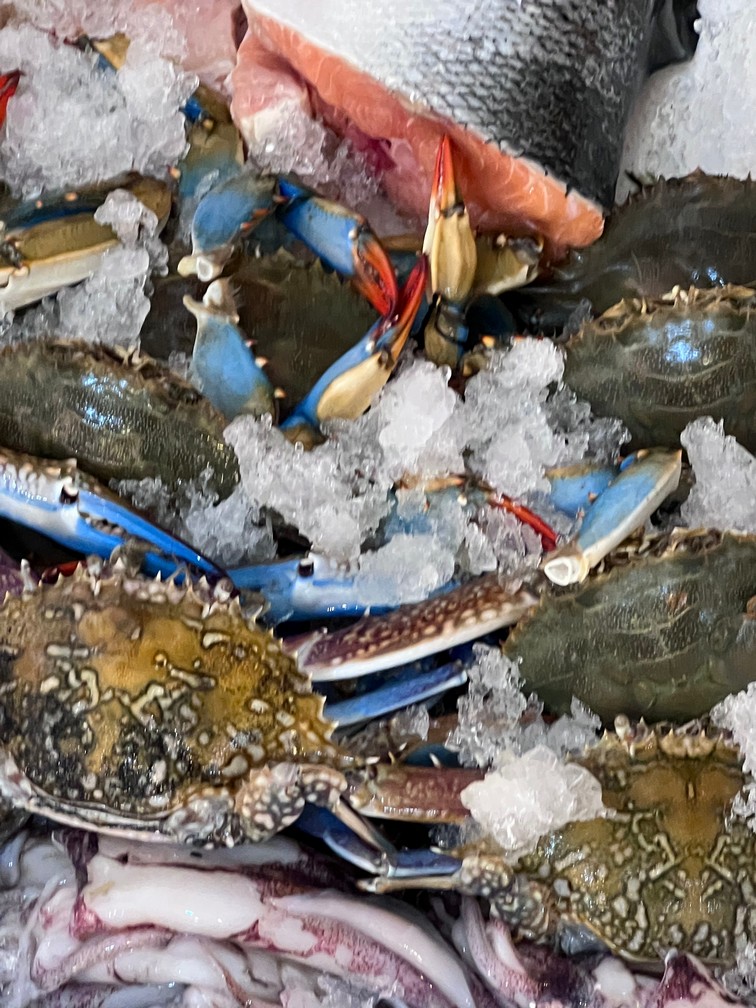 After the fish market, we headed to essentially a cheese shop where lots of Turkish cheeses for the ship were purchased, but also some frozen manti – basically a very small Turkish pasta with meat filling showing the centuries-old connection with the Italian traders that still have an impact on Turkish cuisine.  (It is also an Armenian dish…showing that despite the hatred – not too strong a word – between the Turks and Armenians, there is a good bit of commonality.) 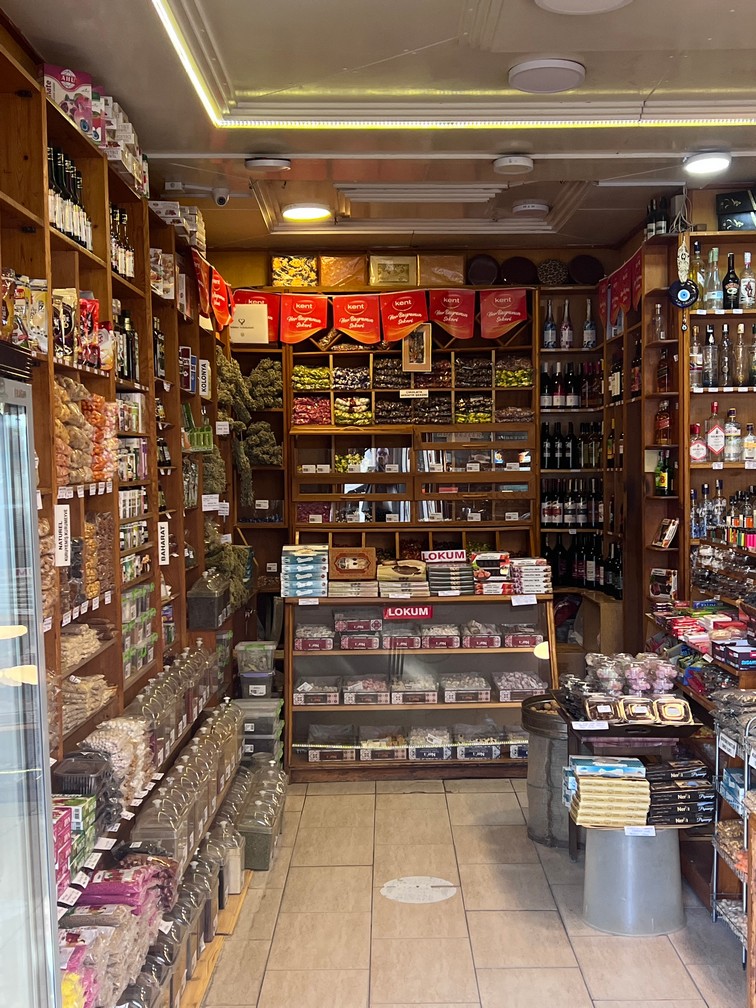 We ended our culinary journey at another spice and sweet shop with a wonderful old man insisting that we try this lokum and that one, and another one, and yet another one.  It just kept coming and I just kept eating. He also offered pistachios, candy-covered almonds, and more. 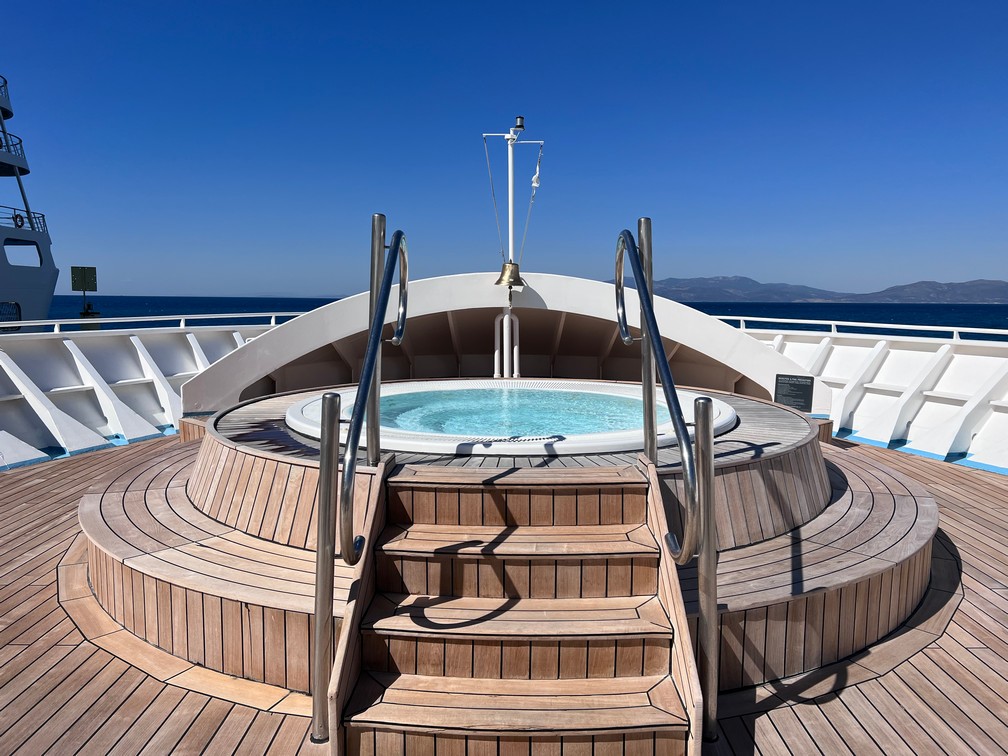 With the shopping over, some headed back to the ship, some headed to Ephesus and others continued to wander around Kusadasi.  I eventually wound up back at the ship and enjoyed a delicious Moroccan lamb lunch, a bit of time in “my” hot tub on the bow and a nap. 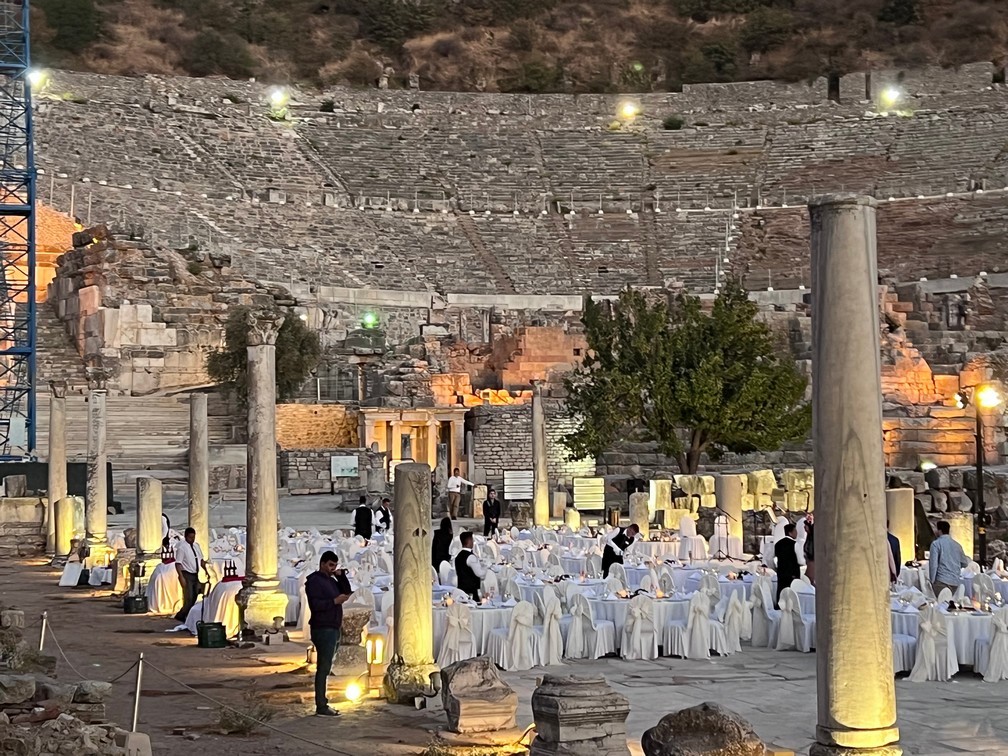 In the evening the entire ship headed to Ephesus for Windstar’s Evening at Ephesus including – truly exclusive to Windstar – a full and tasty dinner. 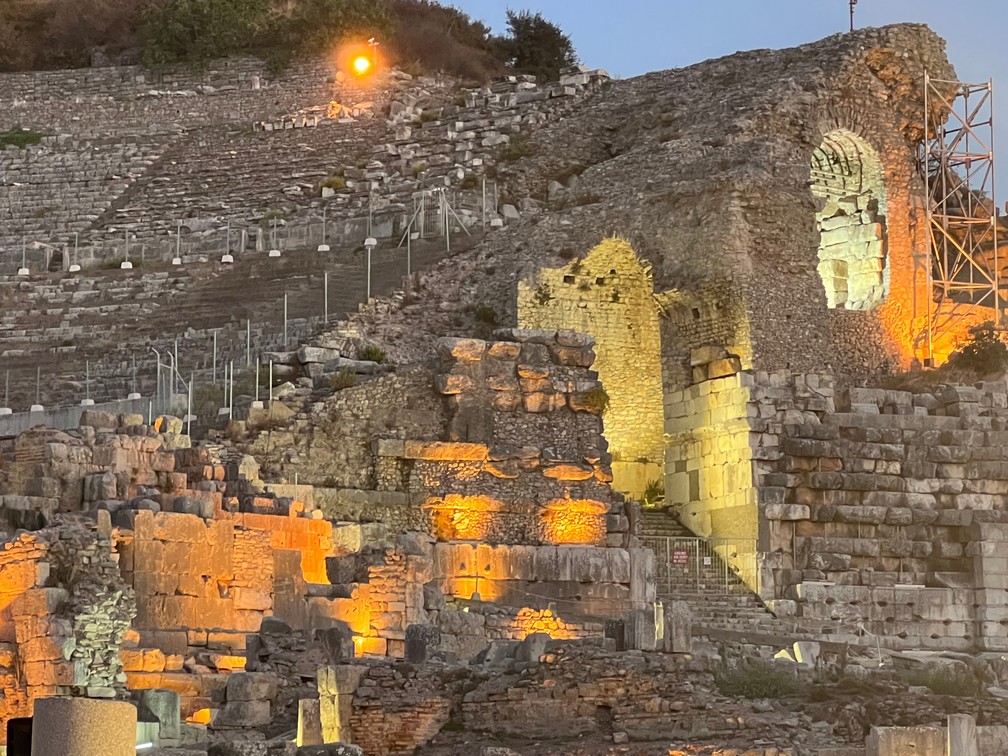 All indications were that the event was to be held in front of the amazing Library of Celius, but when we arrived it was at the Amphitheater. It was stunning nonetheless, but also a bit disappointing. (Apparently, the Library can only seat 150 people and we were over 200…which I guess means Travel is Back!) 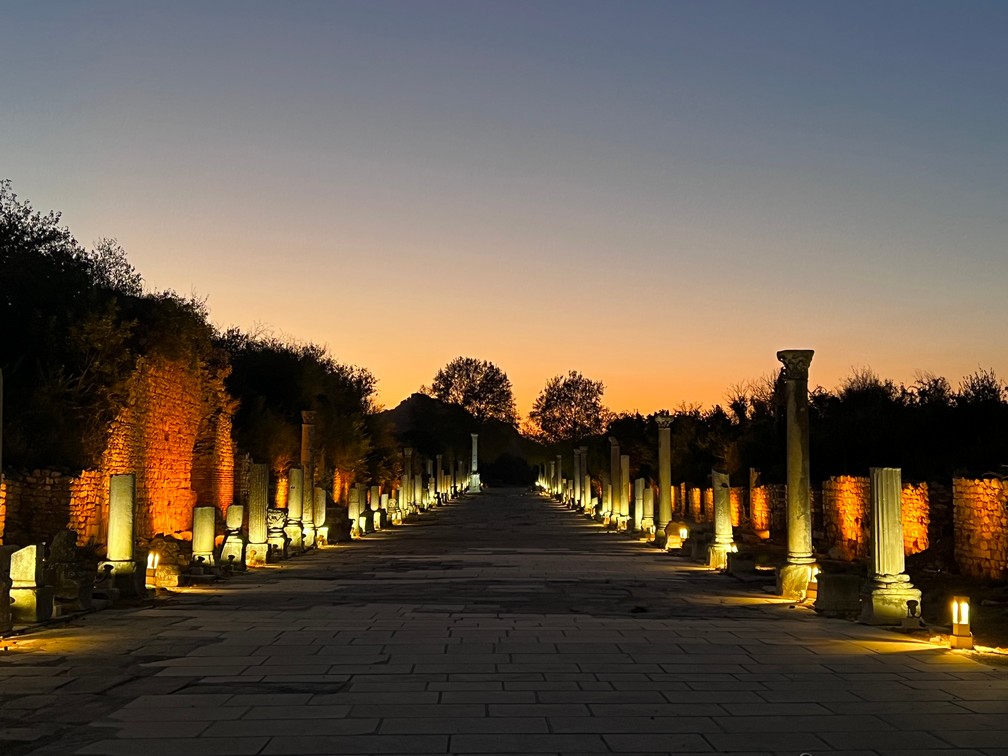 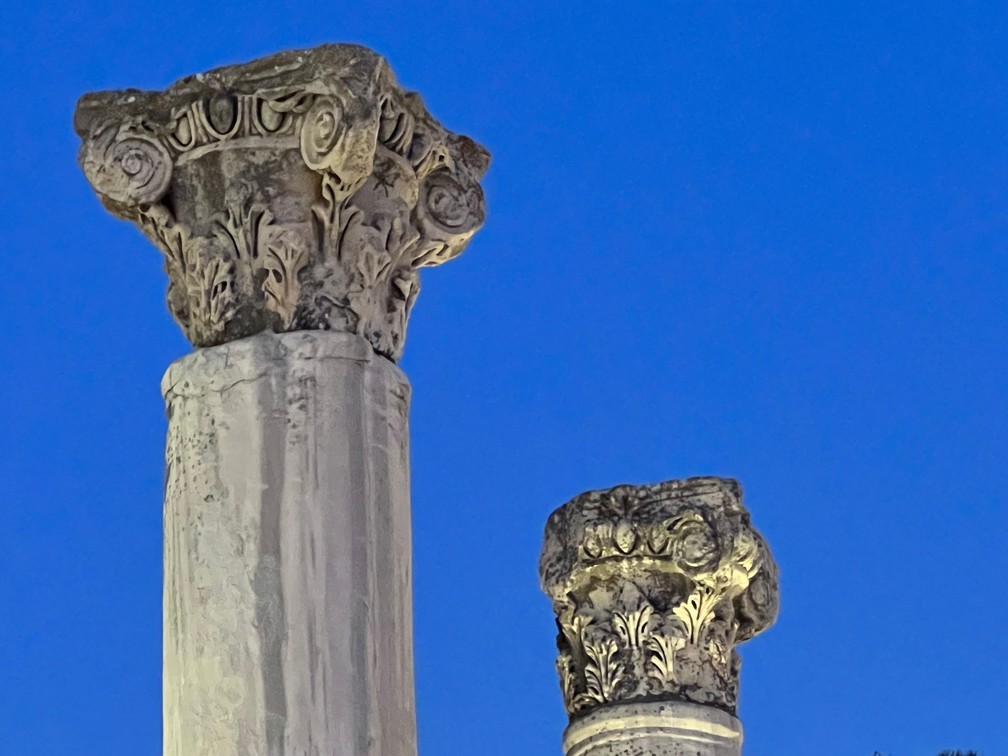 After some wonderful classical music while dining and sipping on endless glasses of wine it was time to head back to the Windstar Star Legend and an energy-packed greeting by the crew, which is always fun.

Bodrum, Turkey was next up. Oh, how Bodrum has changed since my last visit 29 years ago. (That makes me sound so old…but at least I don’t feel it!)  After wandering from the ship through this new town, I just found a spot by the water and sat down. The seemingly gruff man (he was actually very kind) thought I was Turkish when I ordered a small bottle of raki and a beer. He didn’t believe me when I said I didn’t speak Turkish!  But since I was close enough I got the local’s pricing and a nice fruit and cheese plate. 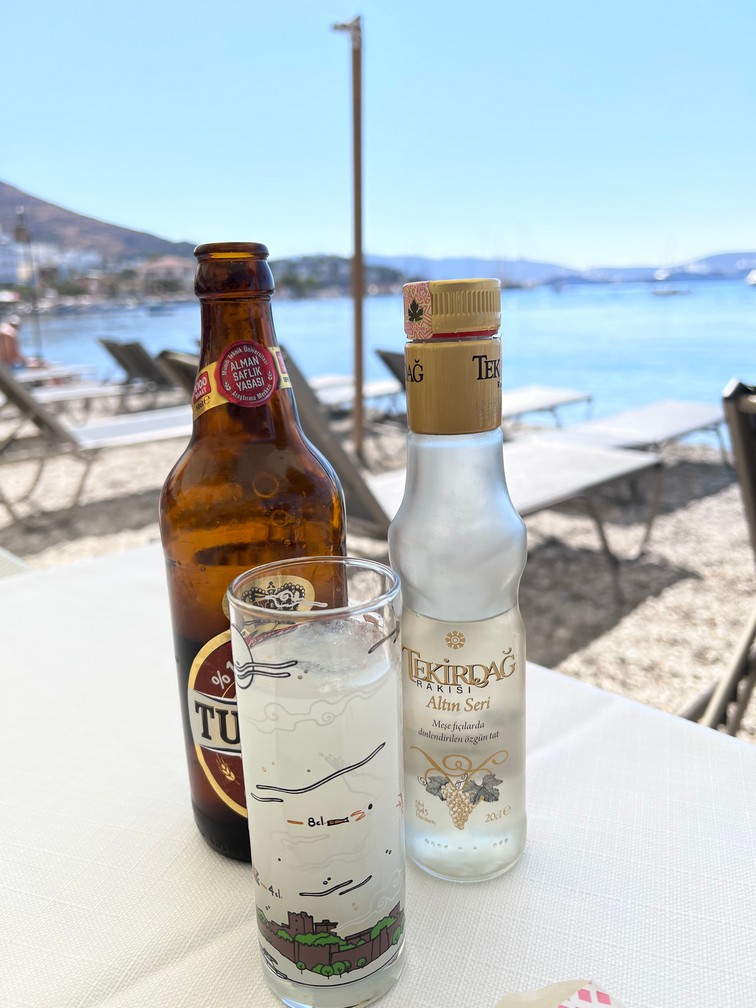 And there I sat for hours listening to the water lapping on the shore, thinking about nothing. 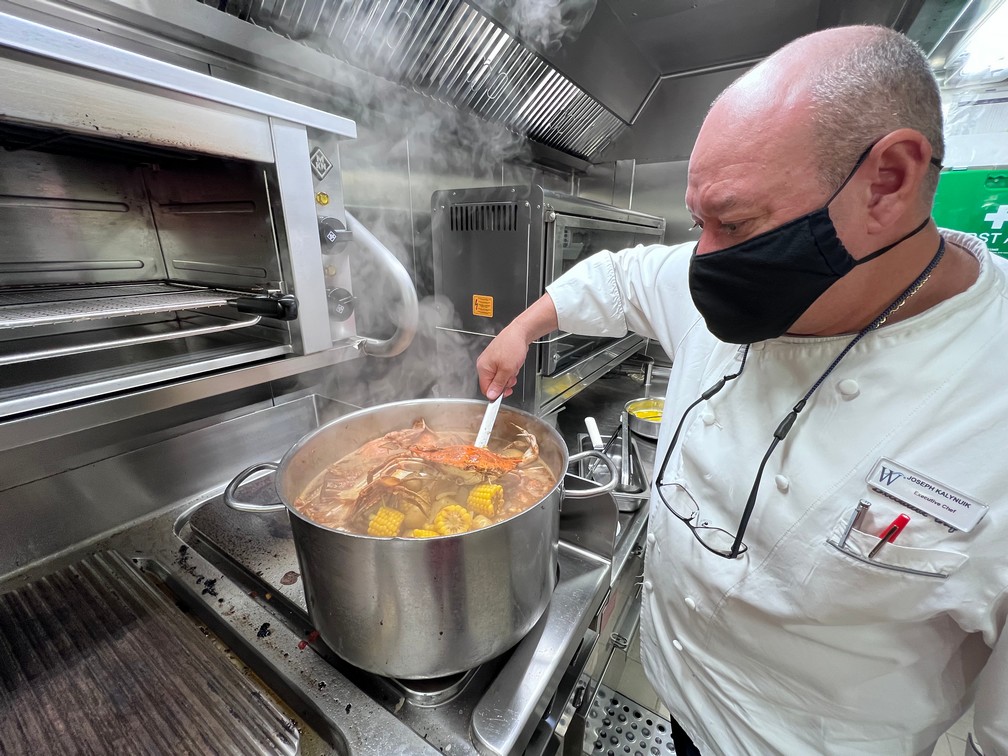 Chef Joseph and I arranged for a Turkish Saffron-Infused Crab Boil that night in the Star Grill. 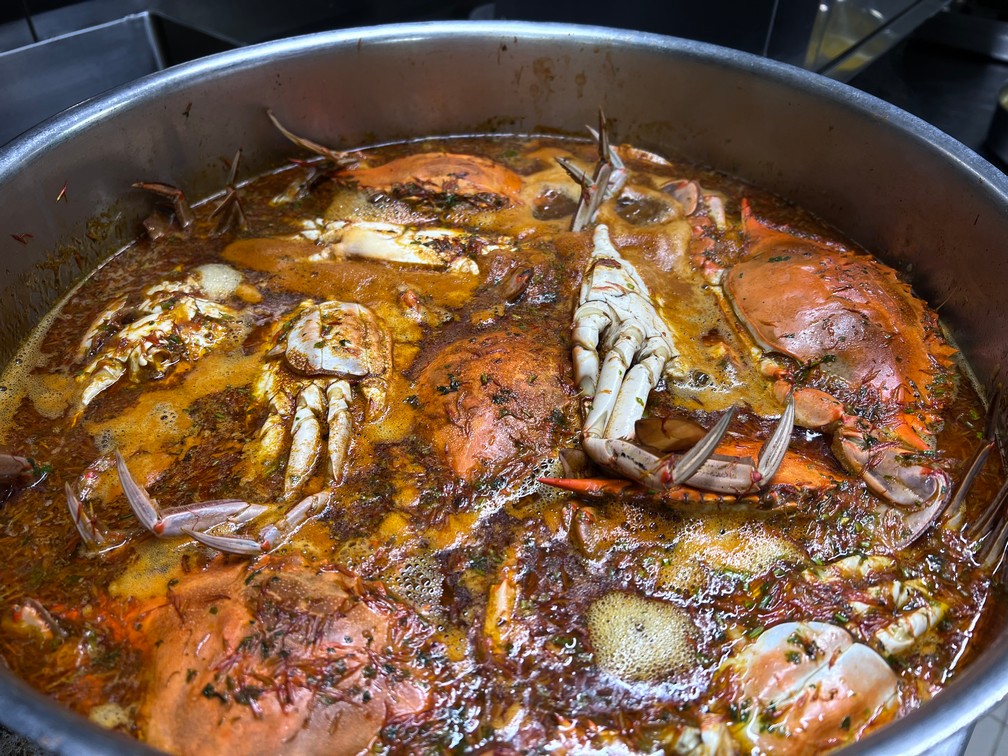 While some found it challenging, or even frustrating, digging out the crab meat, everyone had fun…and as also had the smoked and barbecued offerings of the Star Grill to supplement our special, fun, dinner.

Next up:  An Amazing Wine Tasting Experience in Santorini!