Windstar’s Star Legend arrived in Santorini, Greece – one of my favorite places in the world – for the second Goldring Travel Culinary & Cultural Cruise Special Event.  An exploration of the wines of Santorini:  5 Unique Wineries and 22 Santorini Variety Wines combined with a plethora of local cuisine. 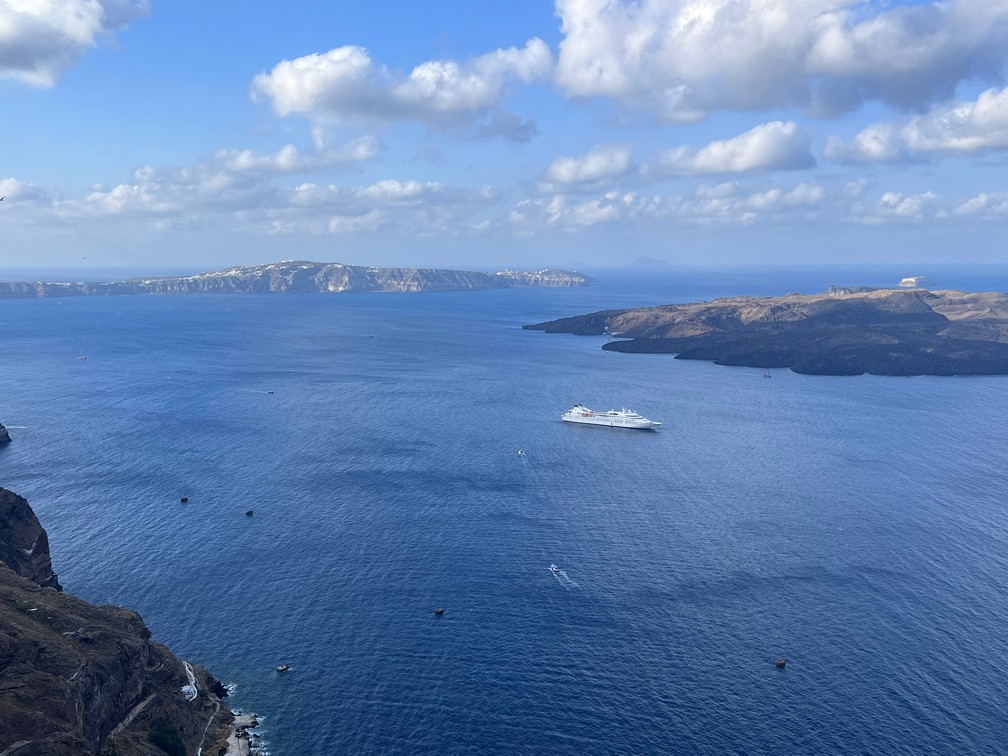 You know the day is starting out right when you discover that the Star Legend was literally the only ship visiting Santorini that day!  That never happens…ever!  (The day before there were eight cruise ships and the day after six were scheduled.)  So we had the cable car, the narrow paths and the roadways pretty much to ourselves.

We met our sommelier guide at 10:00, boarded our luxury van, and headed right to what would appear to many to be a vacant lot. But it really wasn’t. It was filled with the unique, low-to-the-ground, circular vines that the uniquely Santorini grapes grow on.  They are trained that way to both protect the grapes from the harsh sun and wind, but also to collect the small amounts of dew that form on the leaves early in the cool mornings. 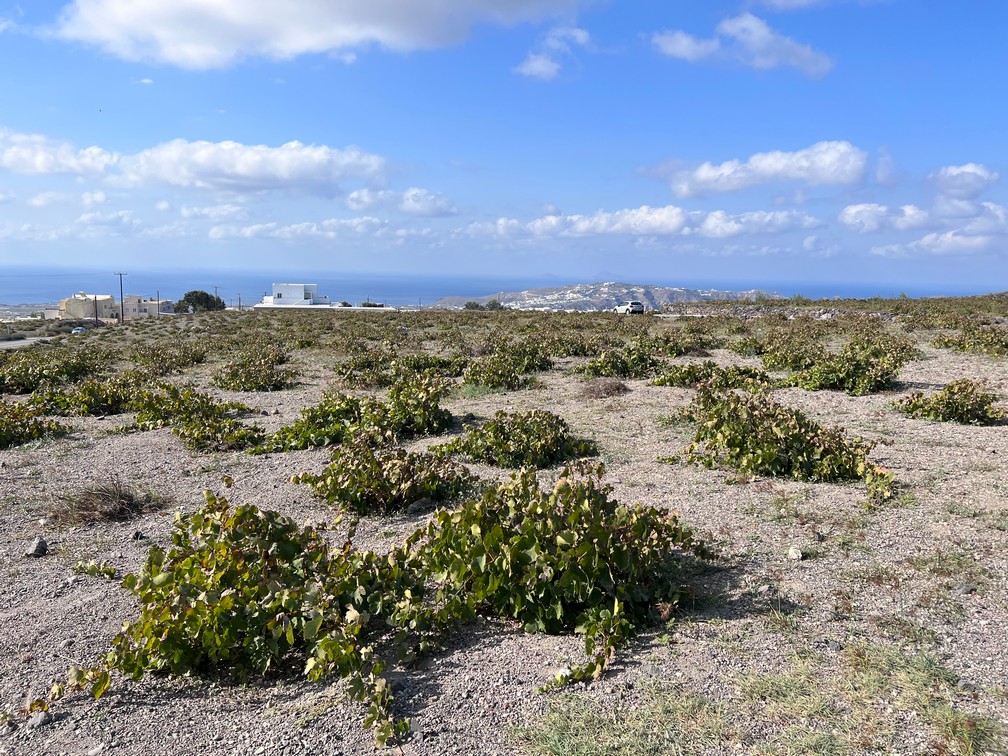 It was then off to the first winery: Hazidakis for our first five wines.  Keep in mind that the number of wines we tasted was not about volume, but rather variety.  And, of course, I am not going to bore you with listing of each wine, the grape varieties, etc. For, alas, wine is about enjoyment; not scientific analysis! 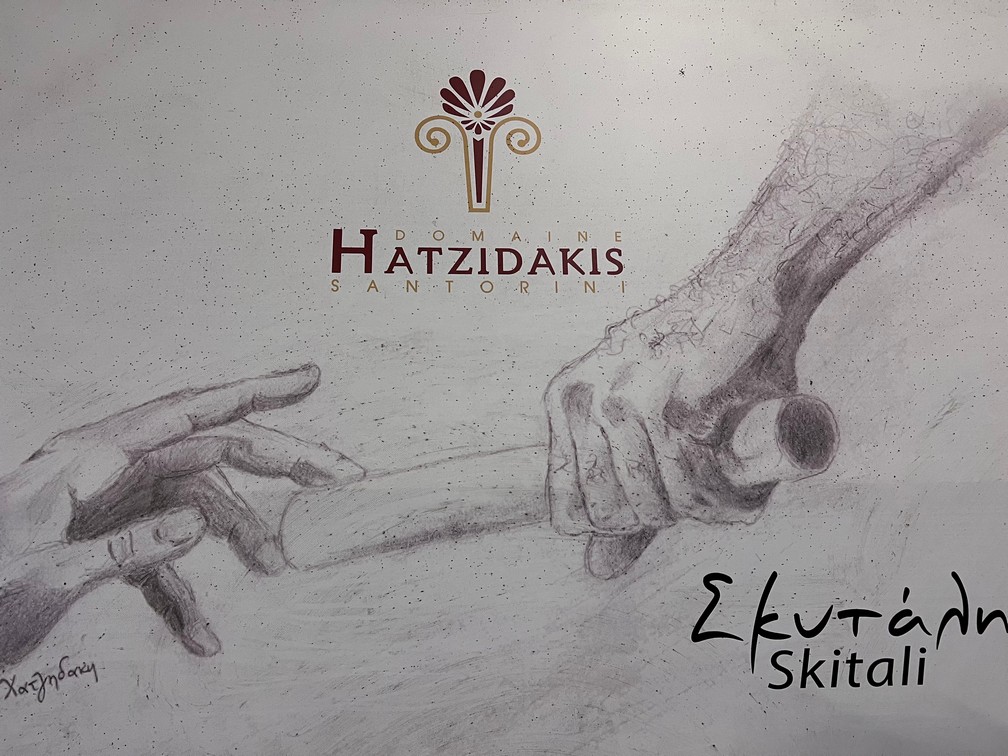 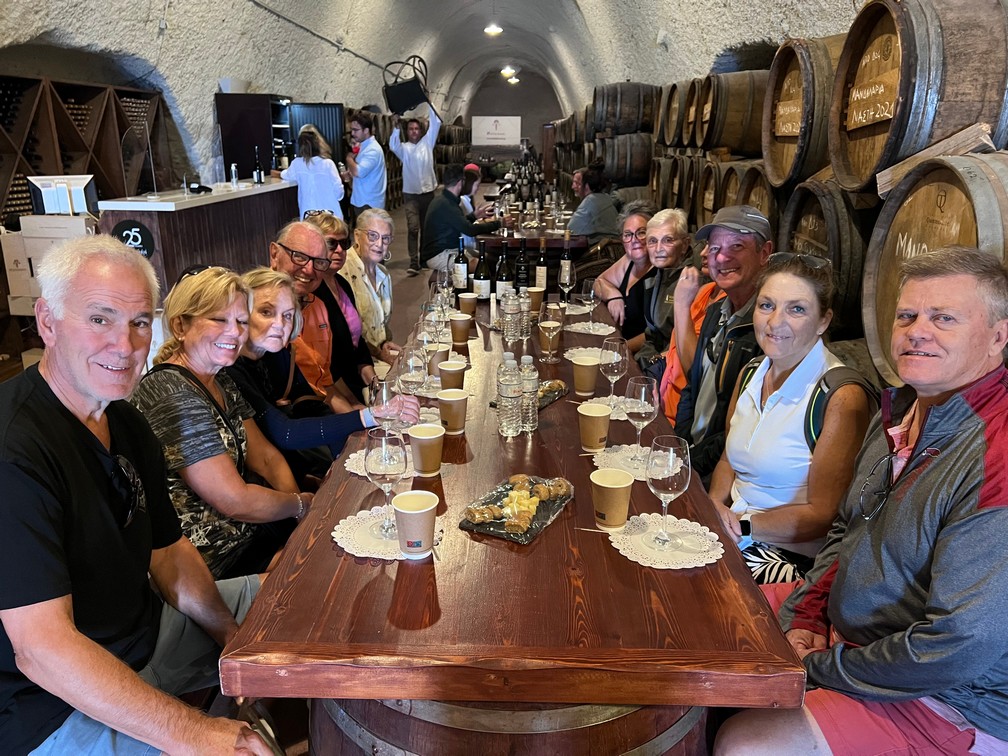 That said, the majority of Santorini wines are white and made with Assyrtiko grapes.  Many times they are blended with chardonnay grapes, but for me, I prefer the 100%. 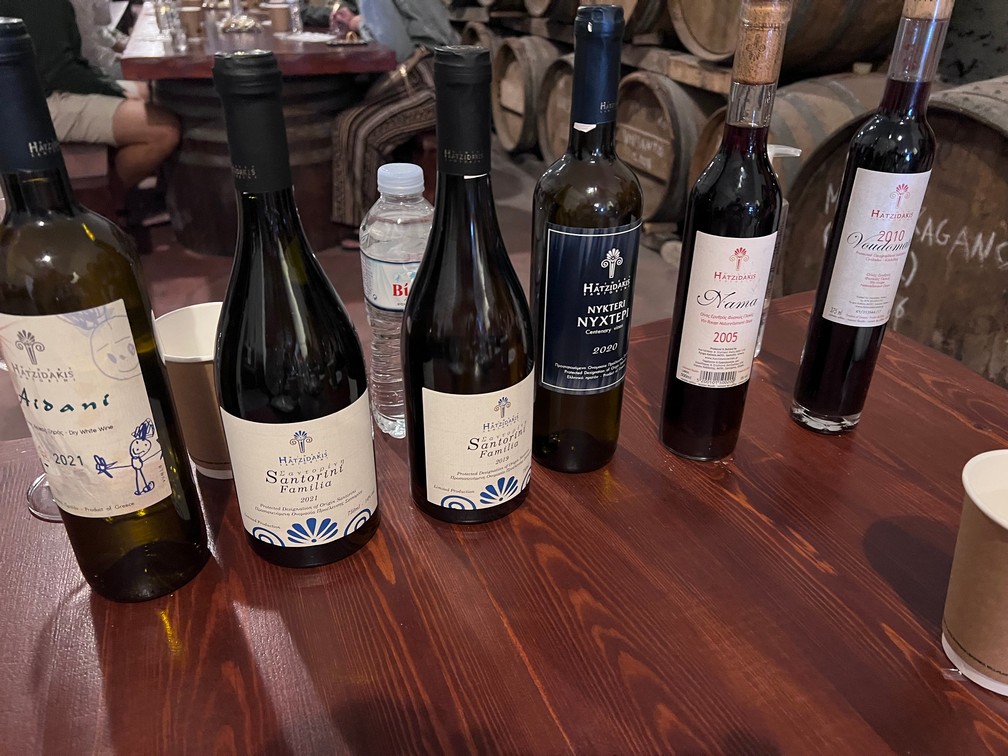 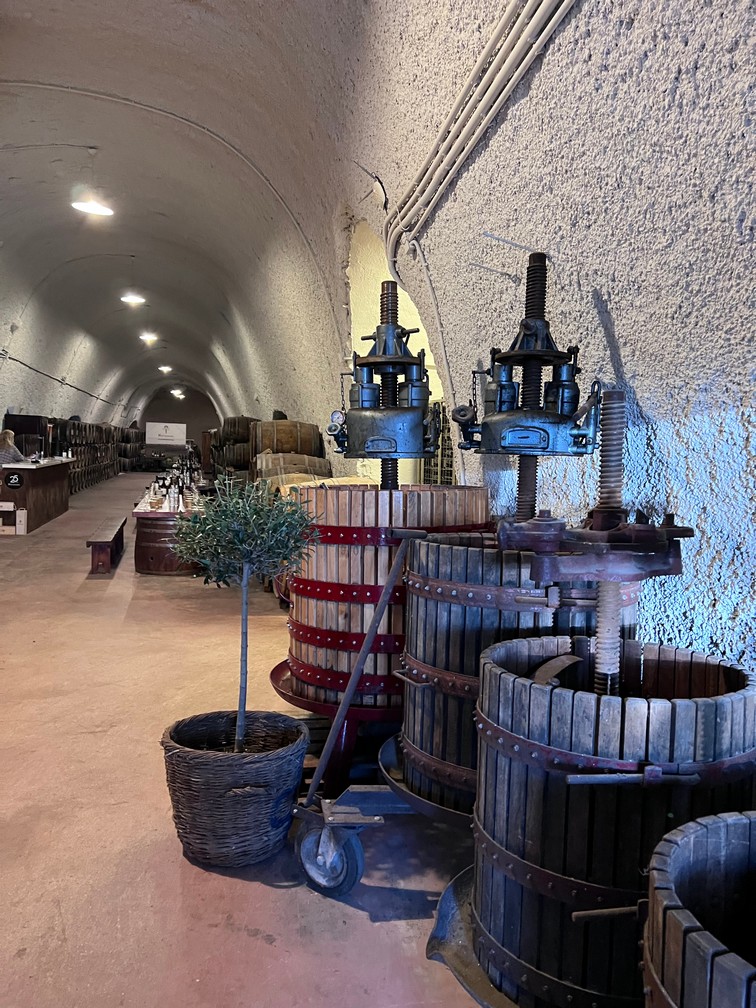 There are red grape varieties found only on Santorini, such as Vouldomato While I am not a fan of the Santorini reds, Hazidakis has a delicious innovation using these grapes: An intensely sweet dessert wine with strong hints of raisins. I’m looking forward to trying this poured over vanilla ice cream…with visions of my favorite rum raisin flavor.  (We just may try that out later in the C&C!) 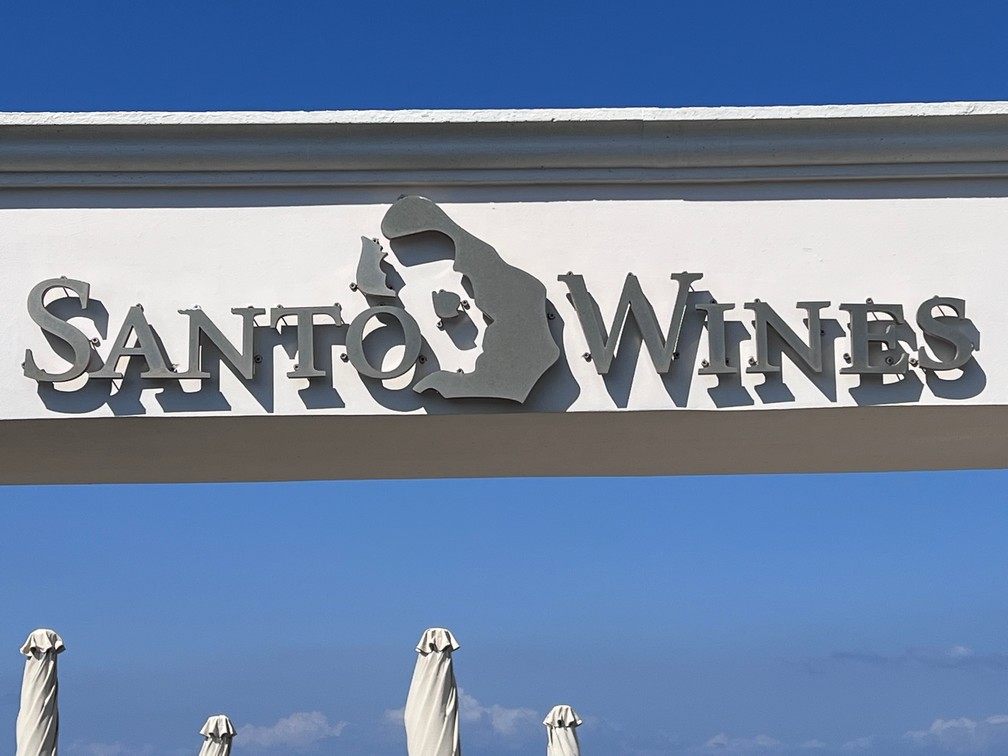 Next up was Santo Winery; the behemoth of the Santorini wineries. Here the most impressive feature was the setting. It was breath-taking…especially with the Star Legend floating just below us in the pristine blue waters. 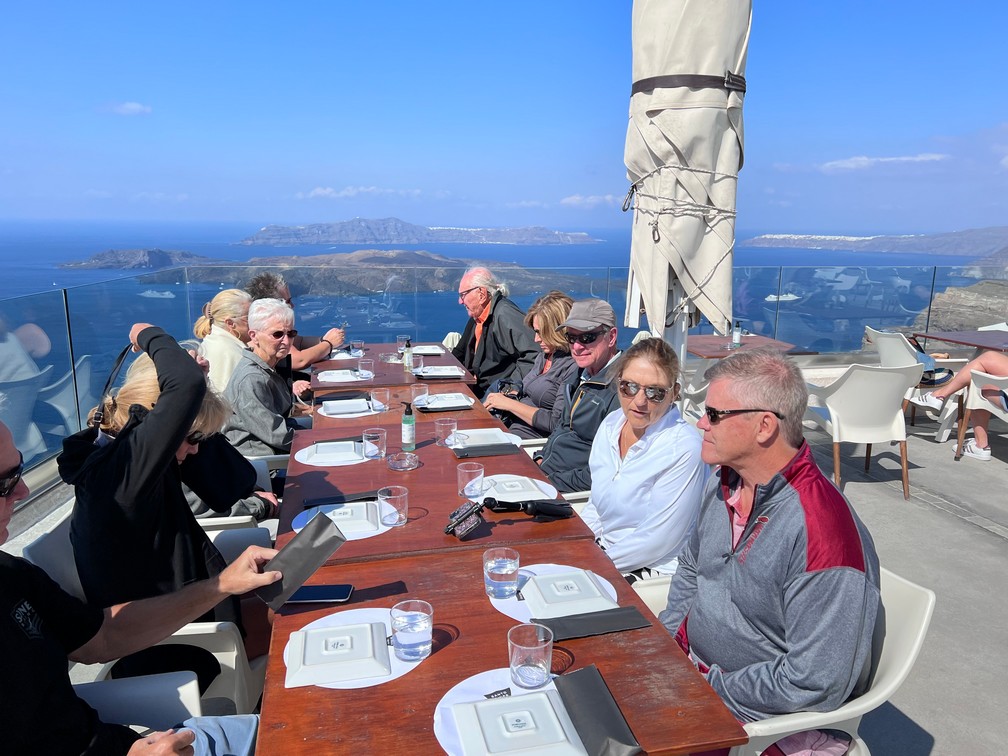 We started out with a glass of sparking wine.  Just as our experience in Istanbul, bubbles are a great way to start an experience even if the wine itself was lackluster. But with that view, it tasted amazing! 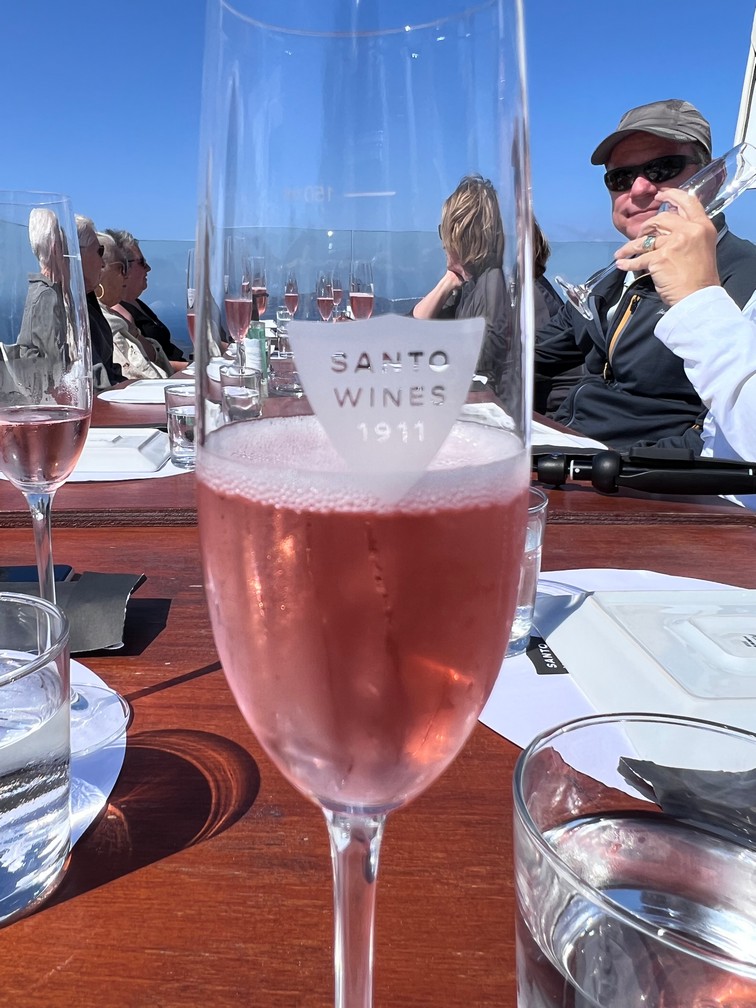 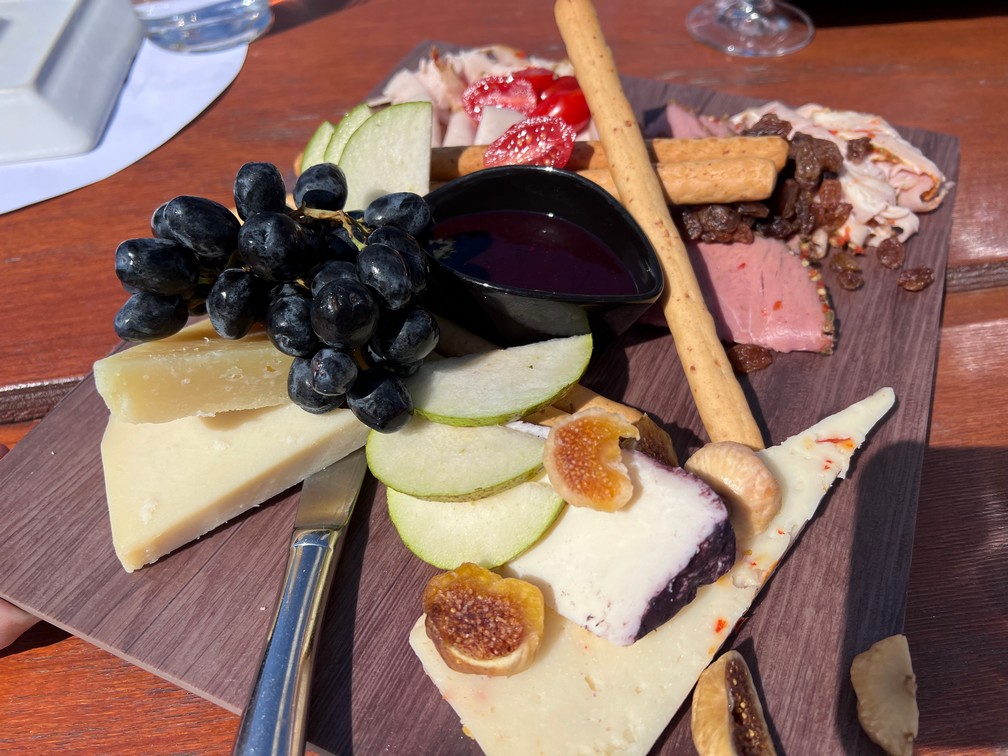 With beautiful charcuterie boards distributed it – with an delicious berry compote – was time for the real wine tasting.  We started with another Assyrtiko white followed by a young Mavrotragano red wine that was aged a mere 12 months in oak; which would be better in a few years, but not something that would age well.  And then one of my favorite wines anywhere: Vinsanto, a dessert wine made from sun-dried Assyrtiko grapes, aged six years in oak. It is far more complex than the Vouldomato dessert wine we tasted earlier, but something that I think would be great on its own or with a nice cigar. 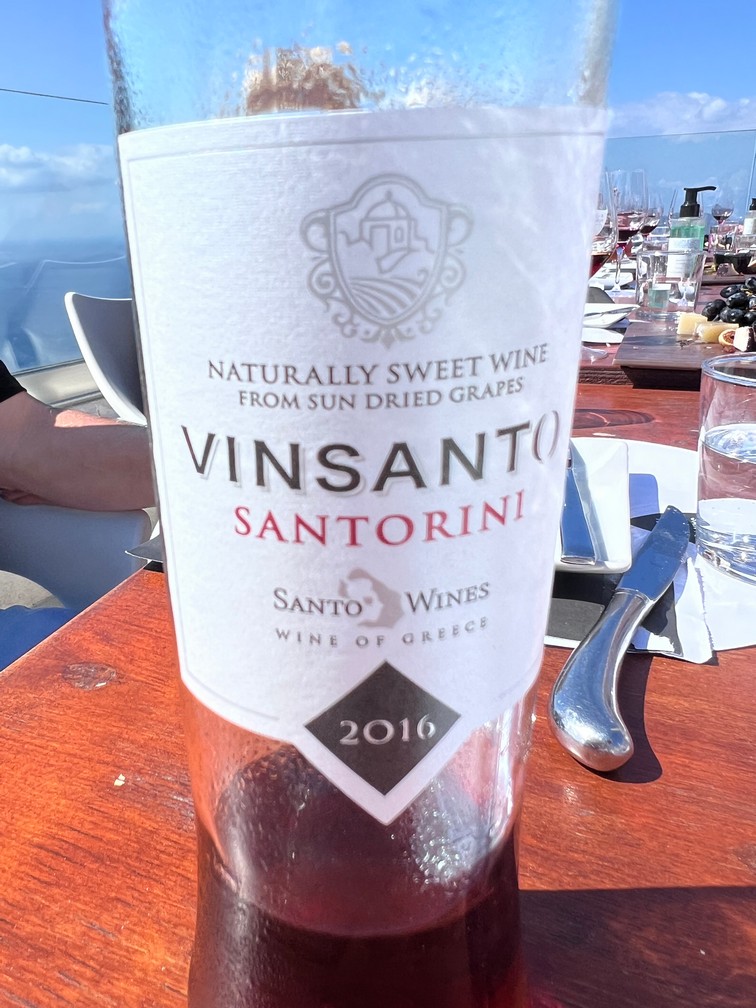 Next up was Anhydrous Winery, where our sommelier said he held his wedding party.  The highlight for me wasn’t the wine, but the culinary offerings!  Sardines on wonderful black bread with a cream cheese, a lamb mousse with yogurt on pita, delicious breadsticks to dip in hummus and eggplant and more. 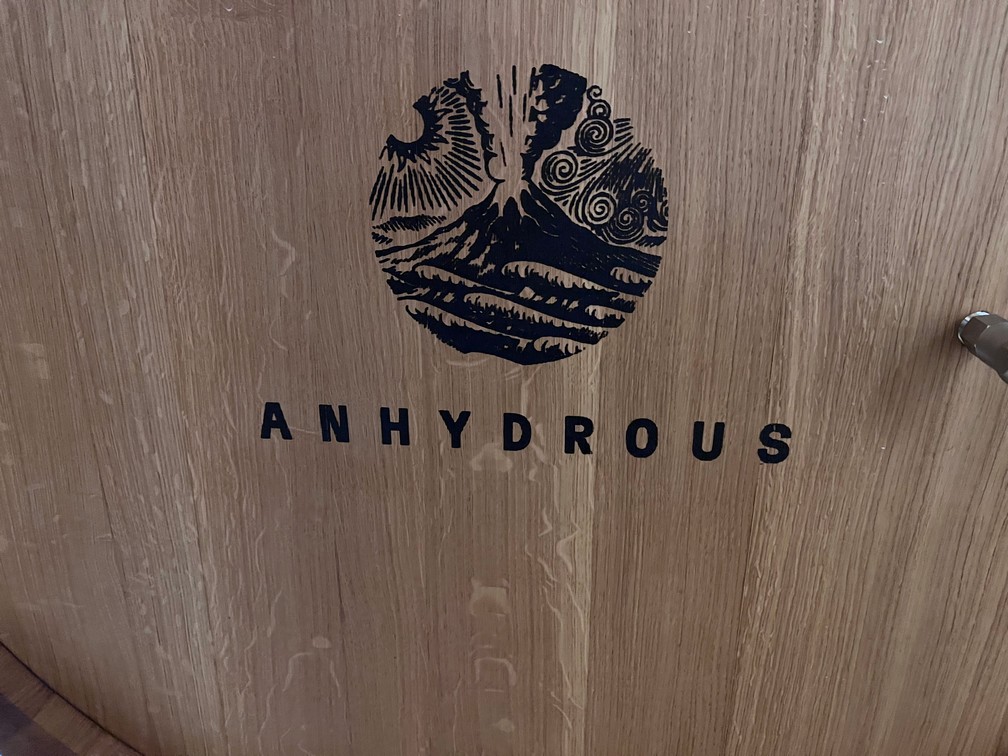 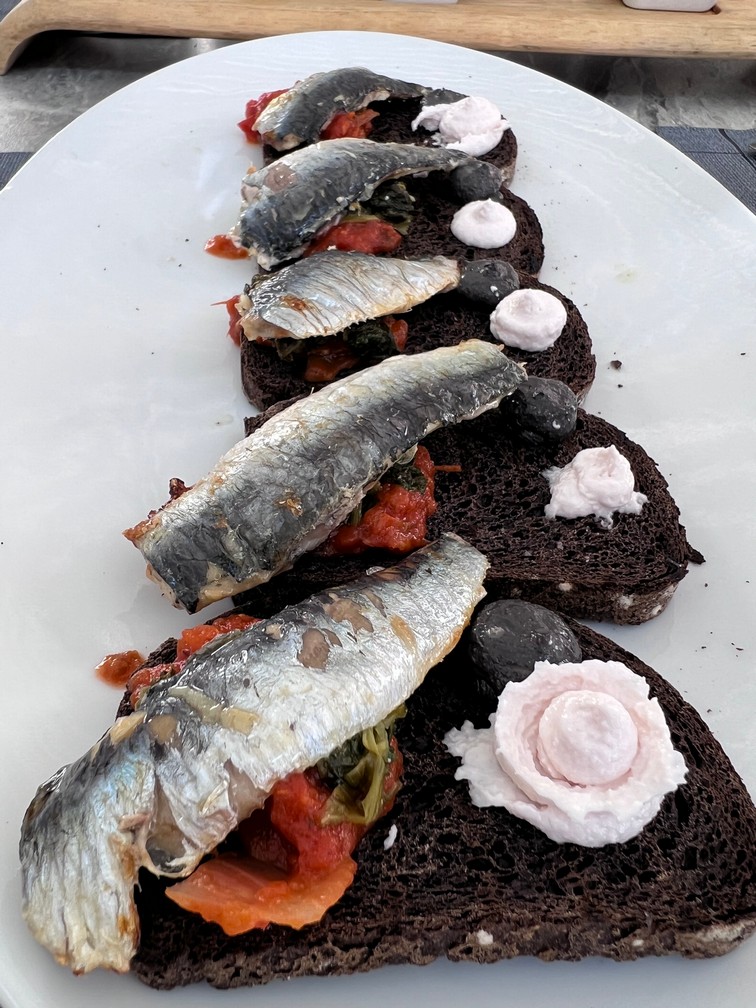 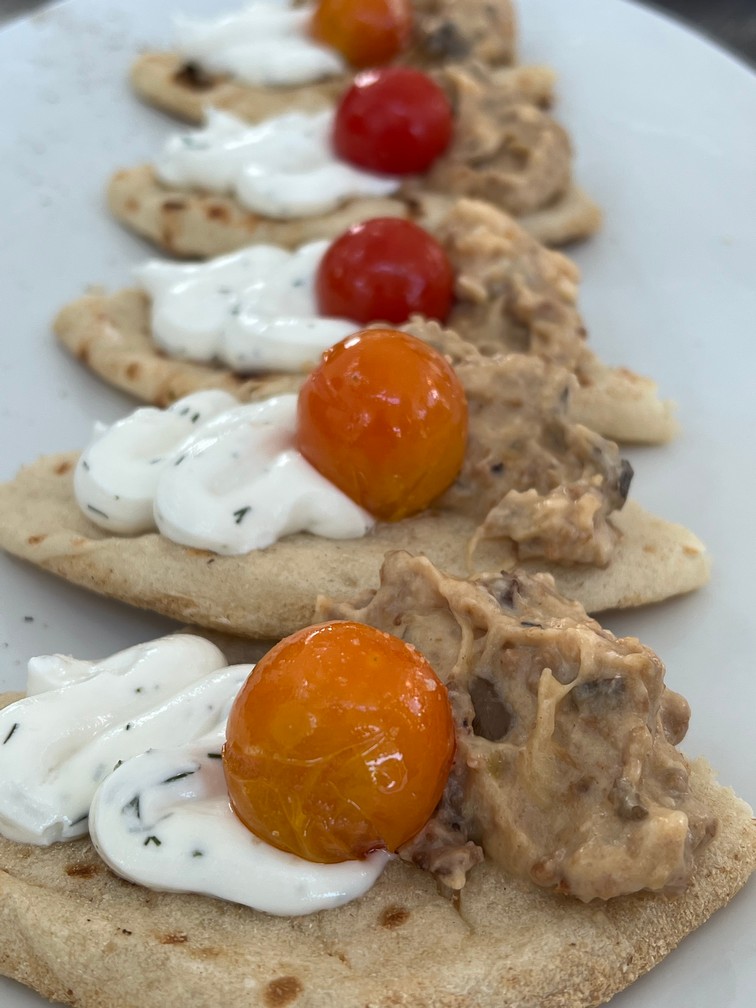 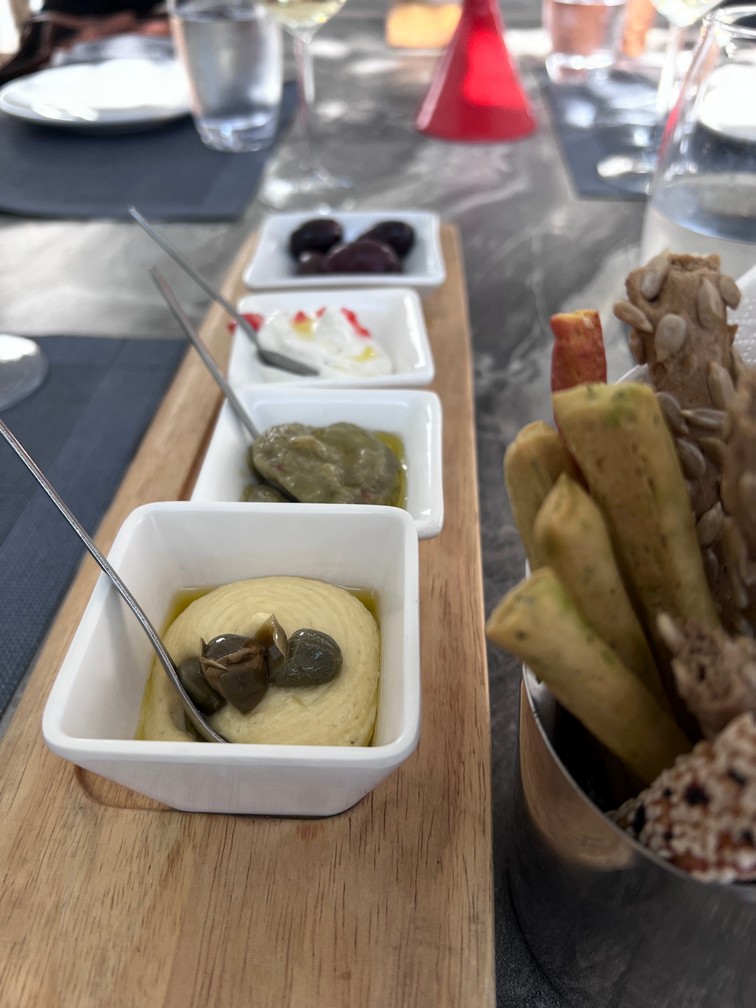 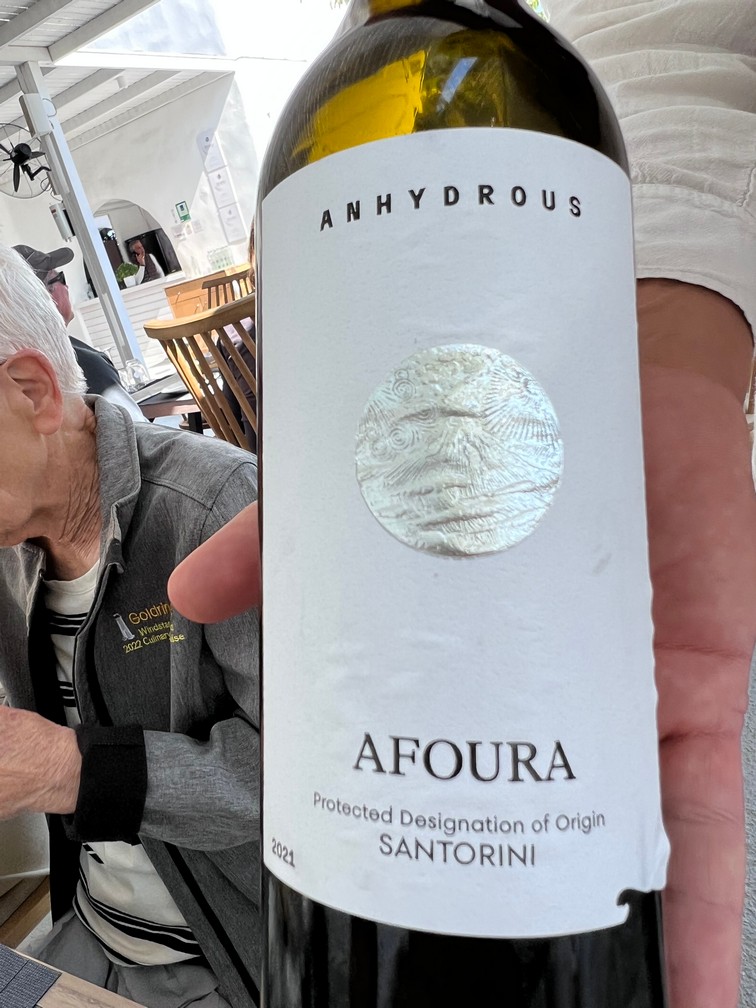 We then shifted to two red wines, St. Nikolas, and Agios Xpouros; neither of which were favorites…But, honestly, by this point between and the wines and the food, it wasn’t like my palate was in any shape to honestly measure a wine.  But the fun wasn’t going to stop! 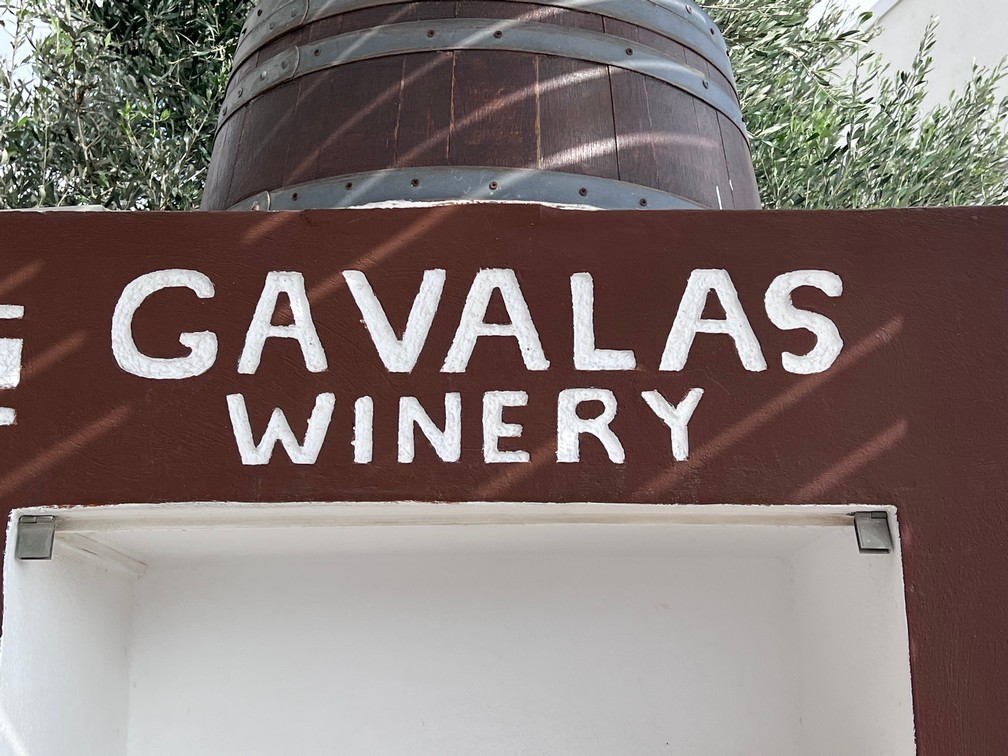 The fourth winery was Gavalas, a funky but charming little winery where we were introduced to two different Santorini grape varieties: Katsano and Gaidouria, which represent less than 1.0% of the grapes grown on the island. The resulting wine was light, and fruity, but not overly acidic or sweet; a nice balanced wine. 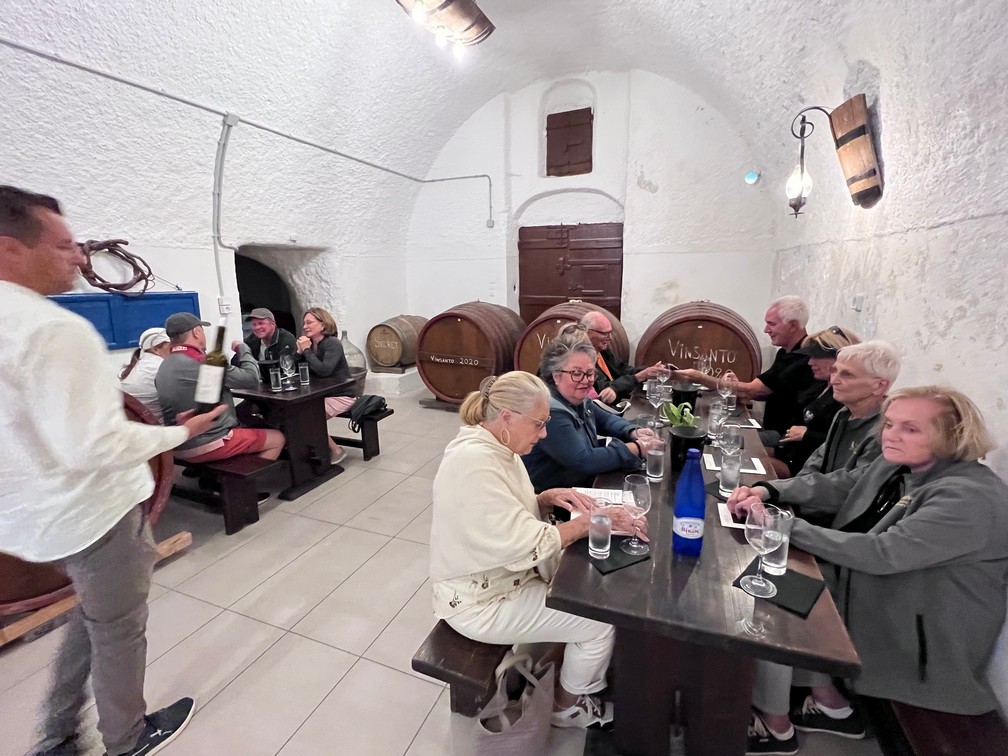 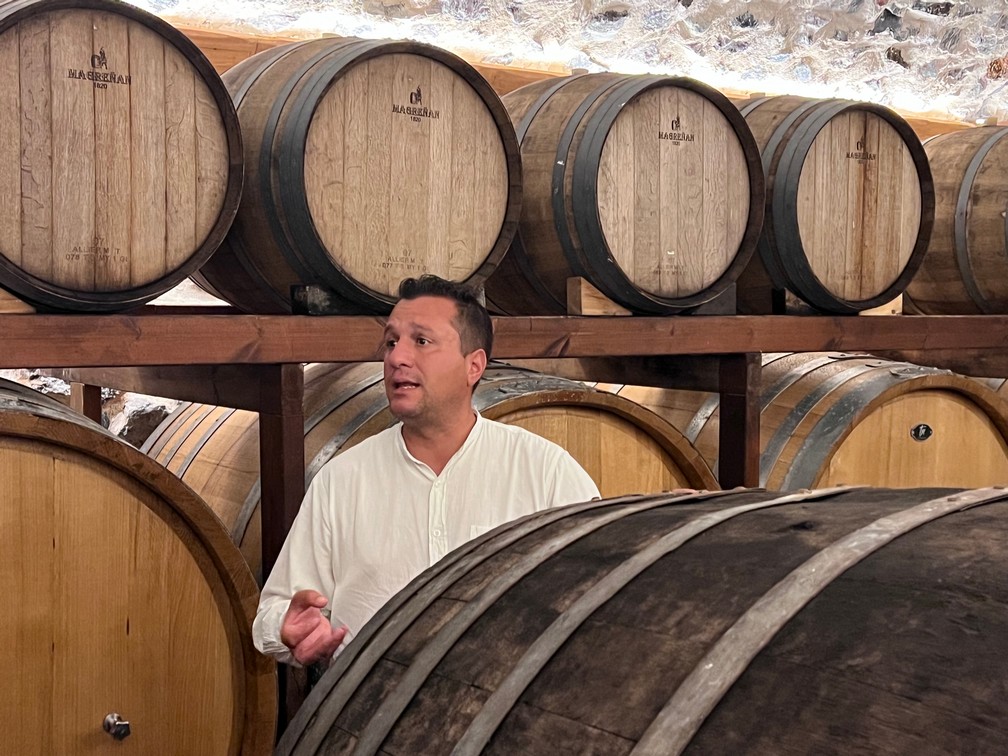 We then tried another Voudomato, but this time not as an intense dessert wine, but as a casual rose.  Next up was Xenaloo, a red wine that was unremarkable, followed by another Vinsanto which did hit a happy medium between intense raisin and honey. 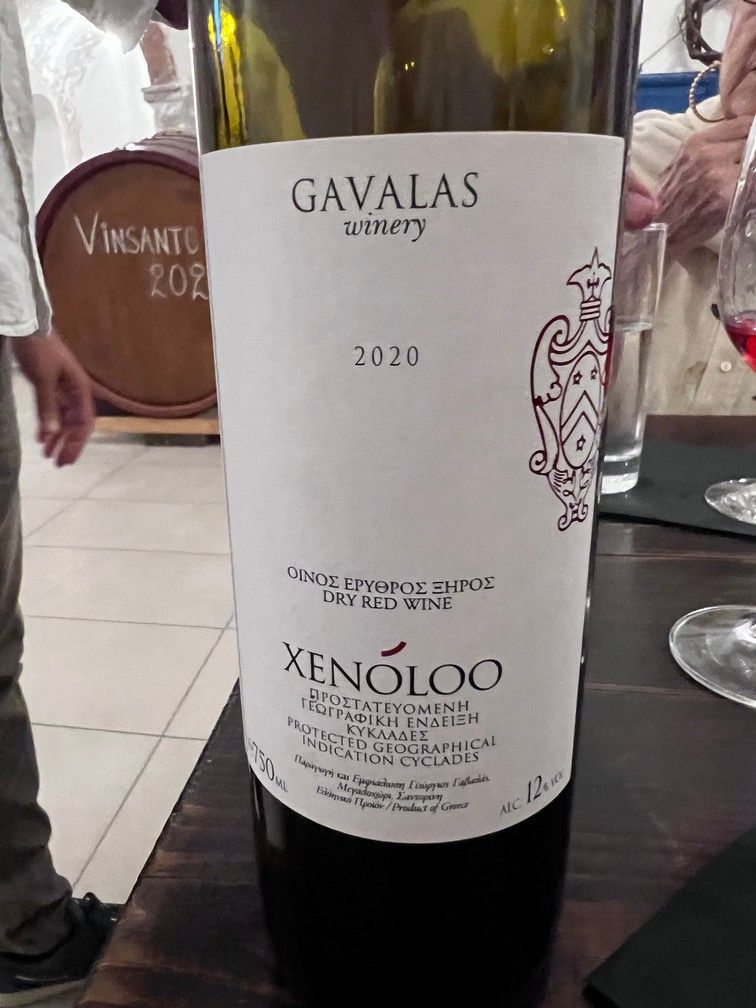 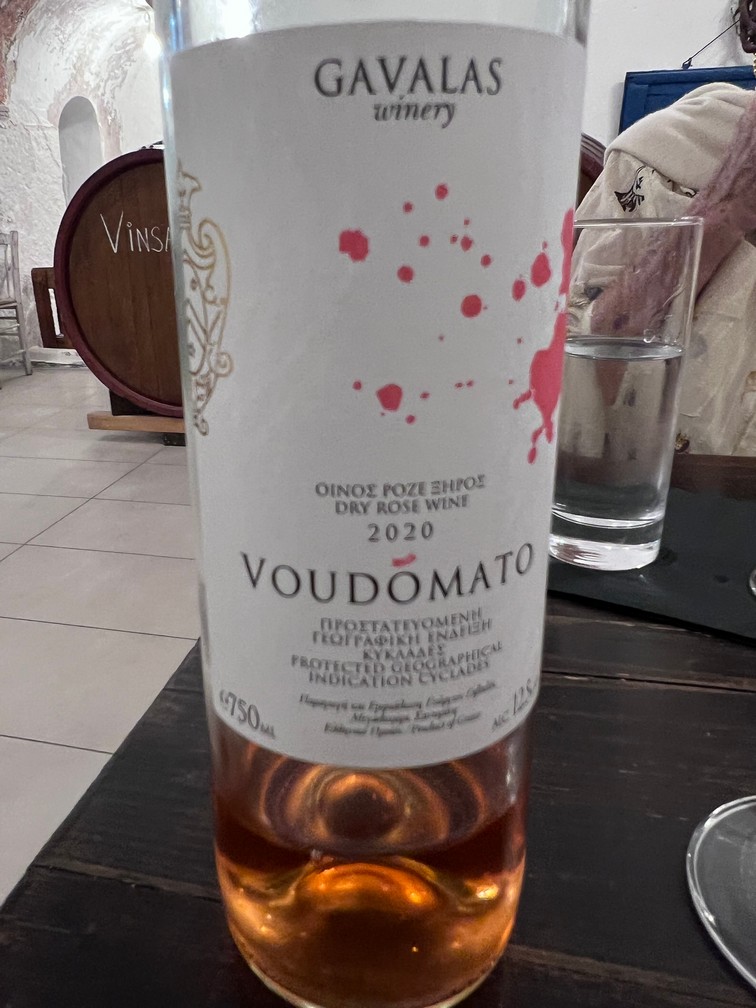 With our palates pleasantly numb and our stomachs full we still had one more winery to go: Artemis Karamolegos. 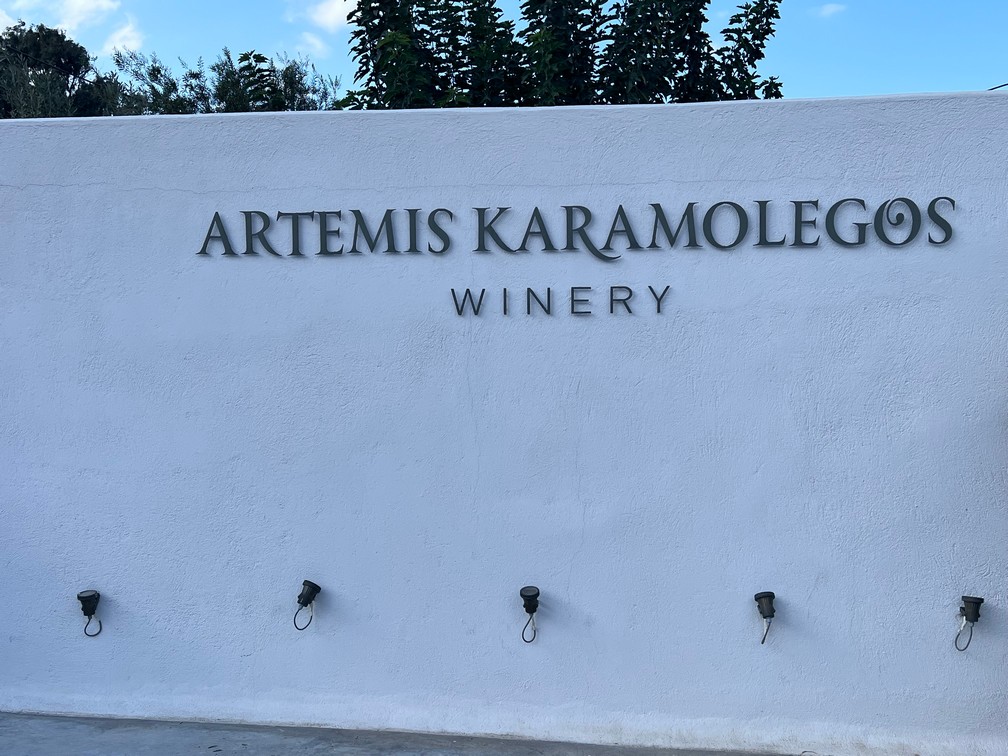 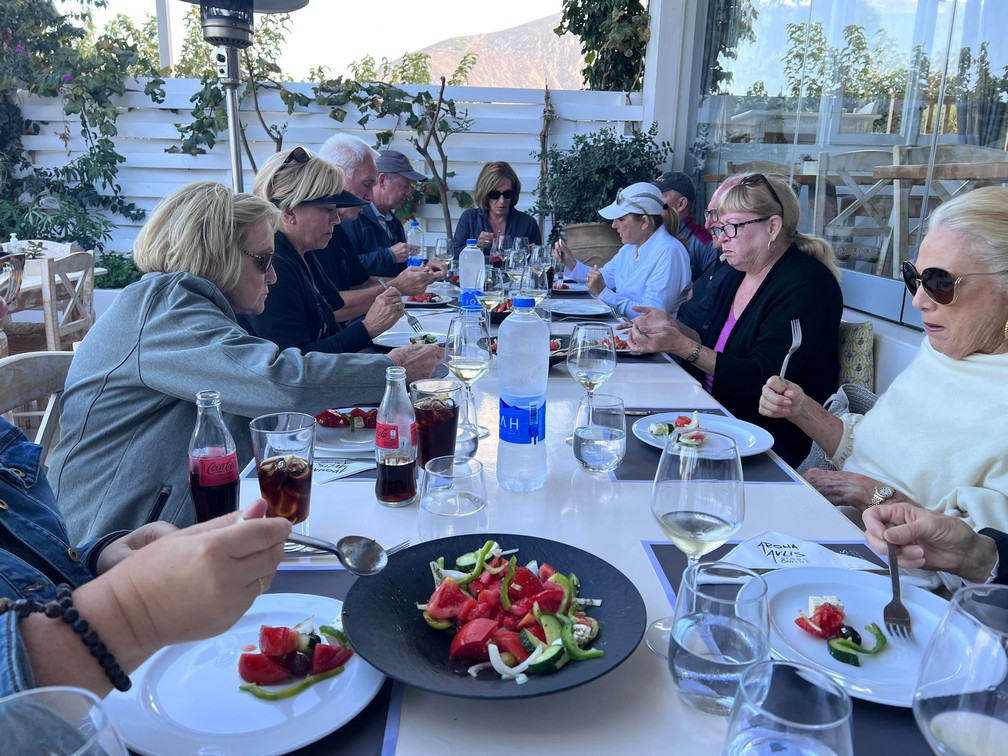 Here, however, the focus was more on the culinary as our final stop was for a late lunch.  (We did have two Santorinis to taste, so not to worry!) 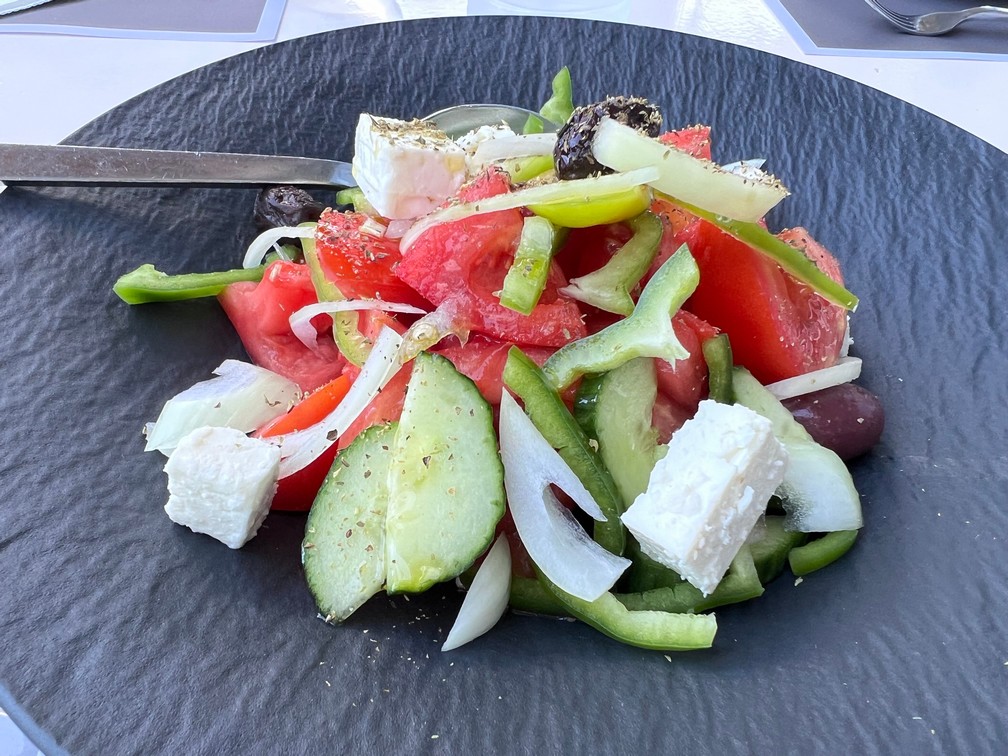 Lunch started with a beautiful Greek salad, followed by Dolmus, and truly delicious tomato fritters, followed by a veal with fava bean puree (which unfortunately was a bit tough). 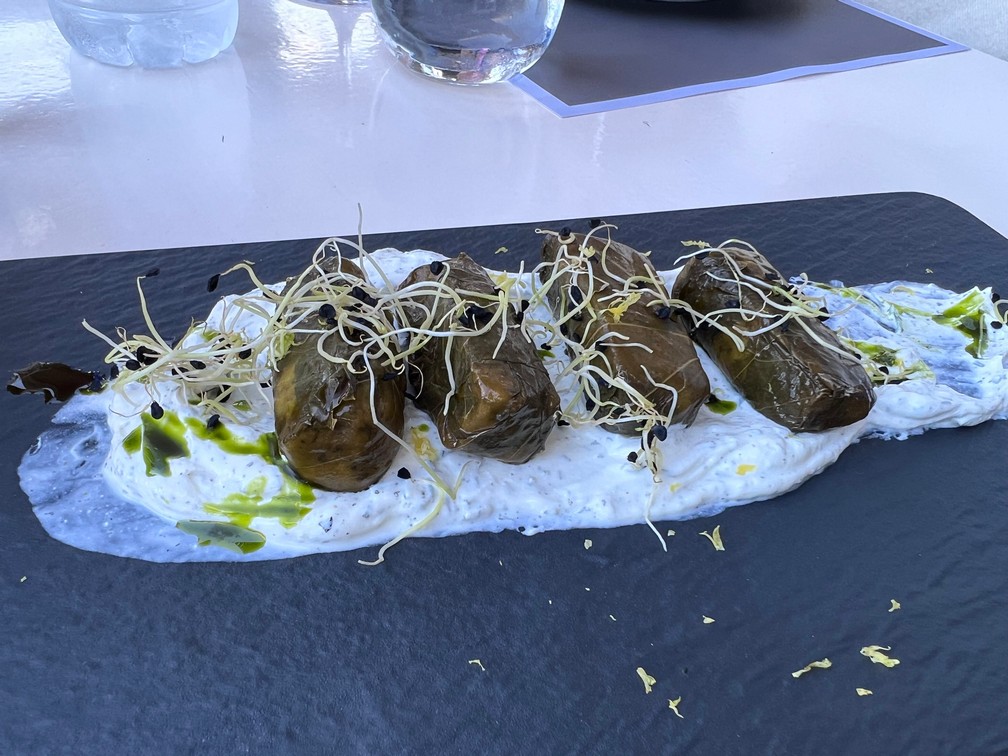 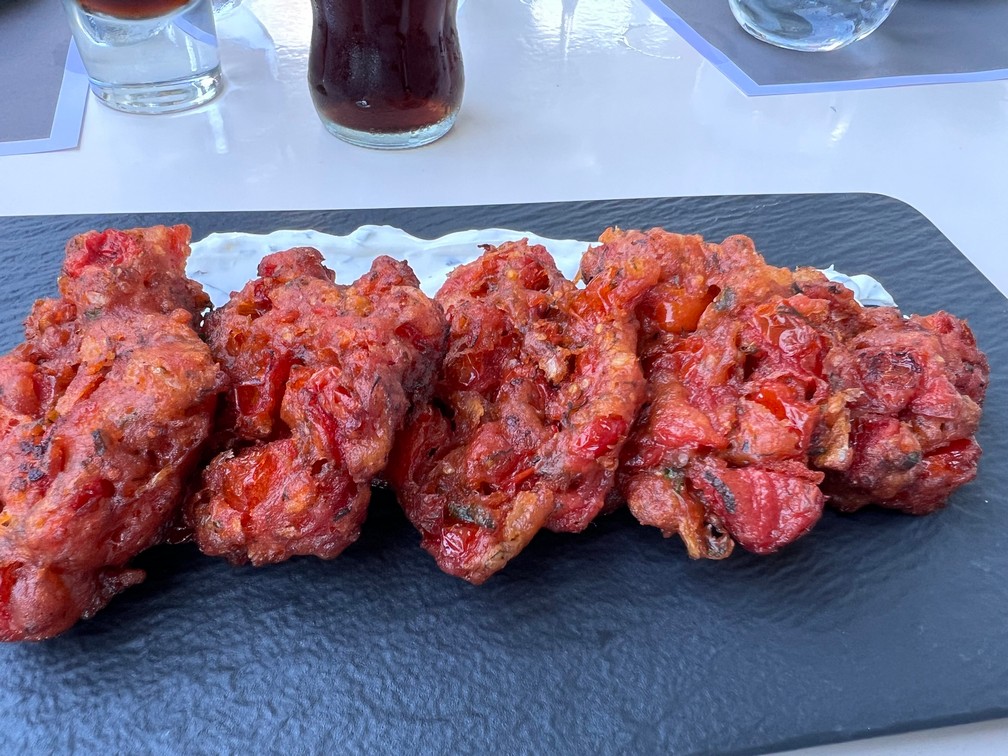 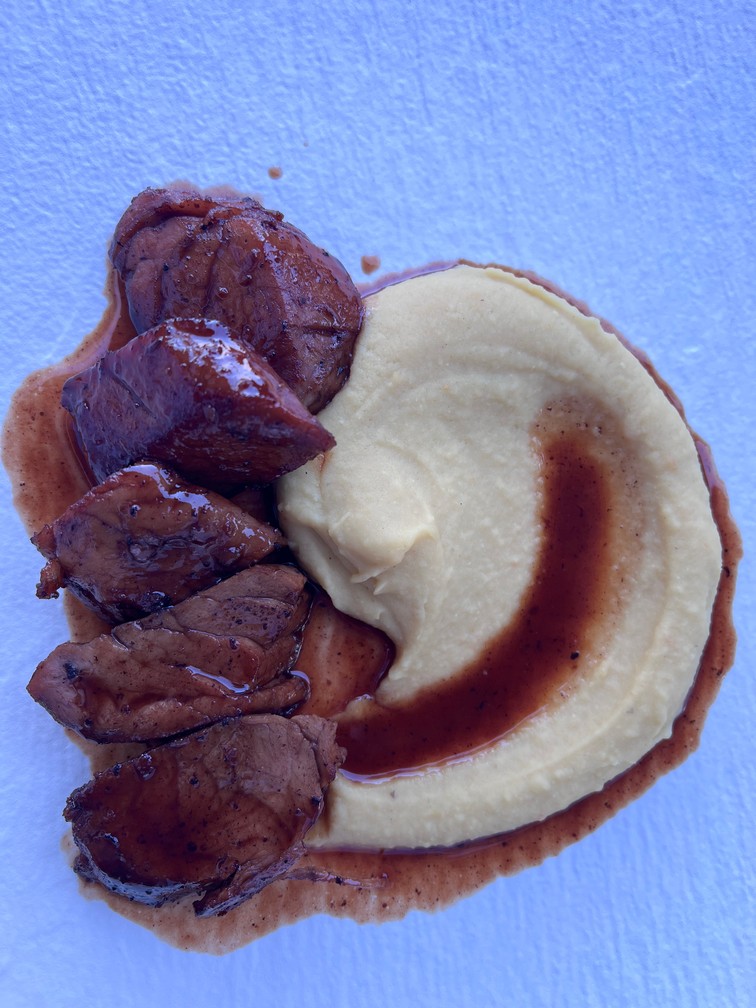 Our day in Santorini ended only in the most appropriate way: Ice Cream paired with a very nice Vinsanto. 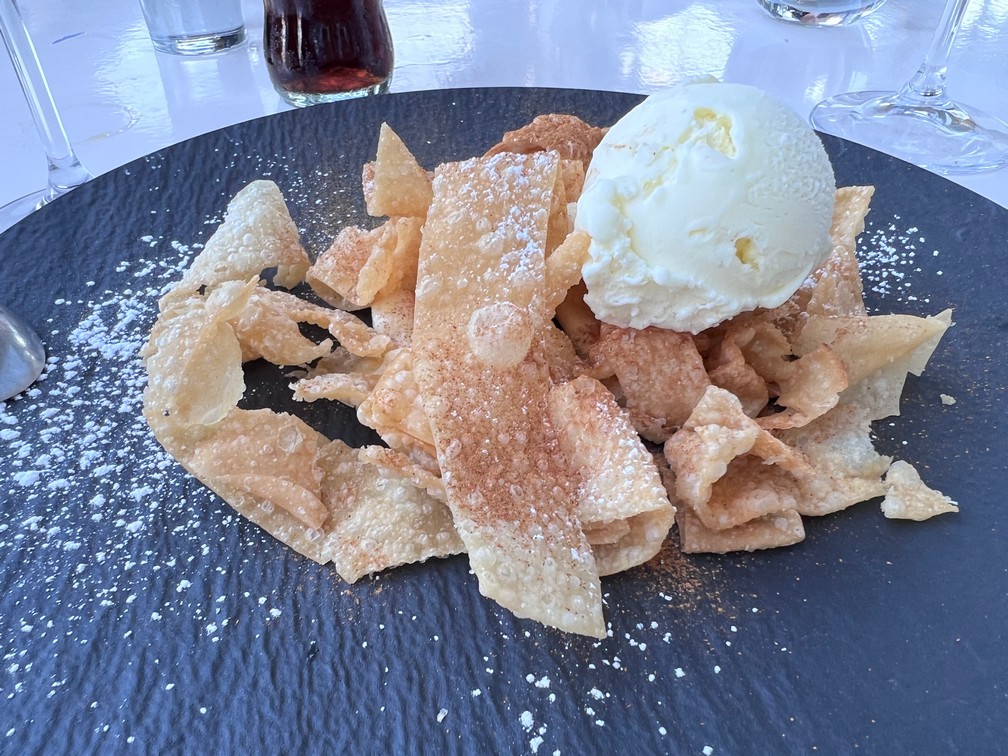 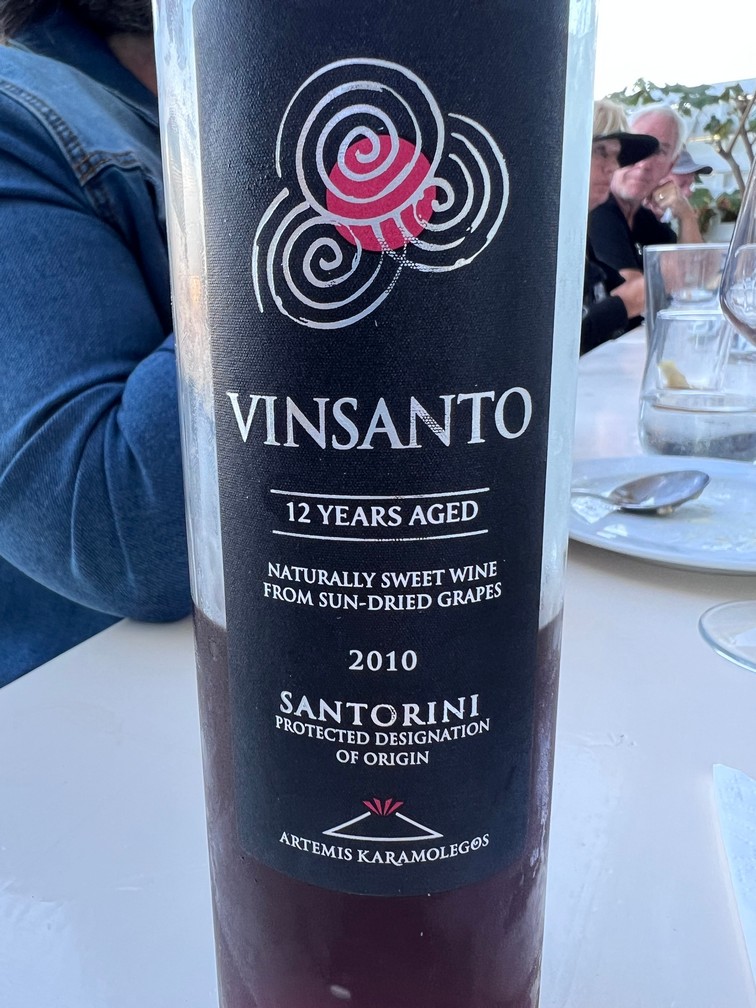 Some of Goldring Travel’s guests “complained” that the day should have ended after only three wineries.  But to that I have to note: Nobody stopped tasting the wines or eating the delicious cuisine!

It was a great day, but for sure a day where, as Bluto from Animal House said, “Enough? Enough? We want more than enough!”

Next up: When your itinerary changes and you find it to be even better!