West Iceland is also known as Sagaland, the area where the Icelandic fantasy stories of trolls, giants, and other creatures – some taking human form and others not – were (are?) created. Over the past day or so we have been told quite a few of these sagas. But, honestly, between the names that nobody but Icelanders can pronounce and the thick accent of one of our guides, they were hard to follow and even harder to remember. Regardless, it was an enjoyable bit of cute culture as we drove for hours through everchanging, but literally always breathtaking, scenery. 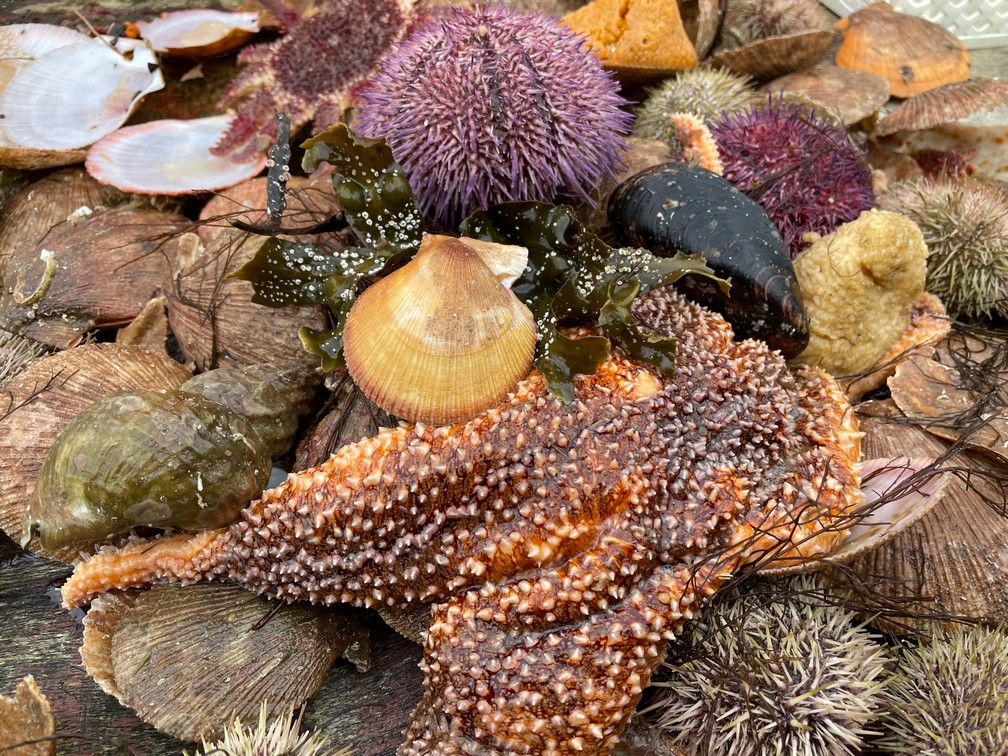 But on the start of our last day, in Stykkisholmur, we had our own, well, saga. A few of the American travel agents became, well, the Ugly Americans.  Ugh. You see, after a walking tour of the town we were to take a boat ride around some of the fjords. But, these few started, “It’s too windy. It’s too rainy. It’s too cold. The seas will be too rough.” Oh, just shut up!  We are guests and you don’t interfere with the host’s plans, but rather suck it up. And. for heaven’s sake, don’t whine!

So we had our walking tour and we were truly blown away…by the wind. Yes, in autumn the winds in Iceland are consistently strong and I mean really strong.  So with the walking tour complete – with visits to various sites that were OK, but not reasons to stop here, and whiners in tow,  we headed to a steel catamaran tour boat with ample deck space and a cozy – if barren – interior to warm up and have a coffee.  Heading out to sea, would you believe the whiners stopped whining and the beauty of the area took hold of them and everyone else. Of course, you did! 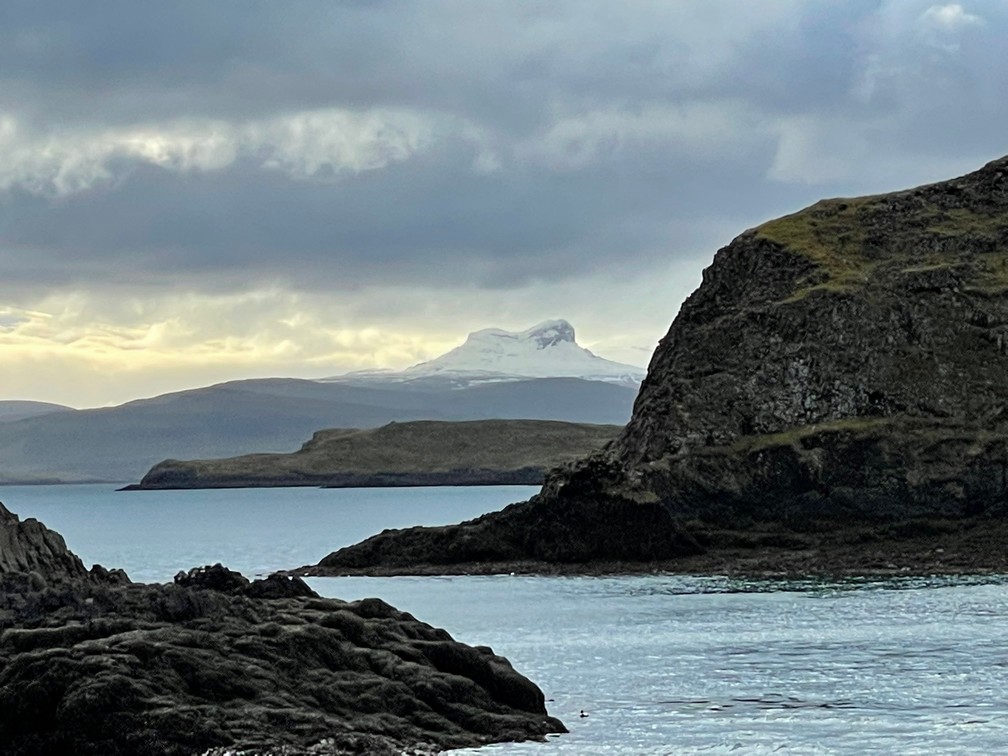 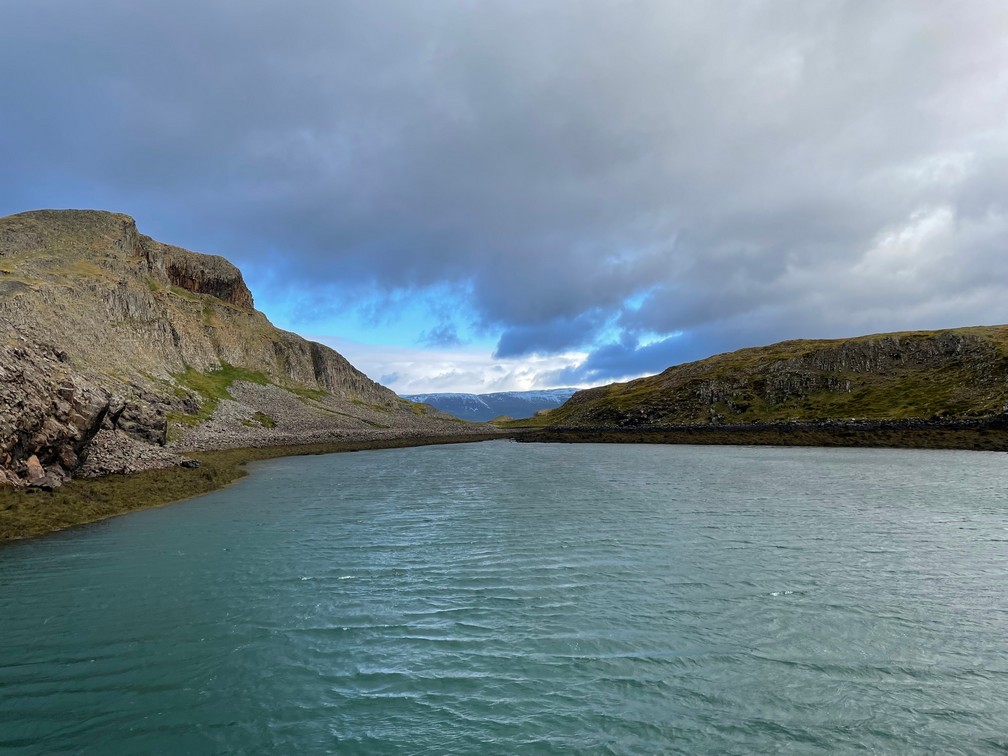 It is admittedly after the season so seeing thousands of puffins, sea eagles and the like was not going to happen, but the captain was very good at explaining the wildlife you would see, as well as the alleged bay where Leif Erikson hid after killing someone. And then the “magic”!

The captain said that we had been dragging a net and to go to the stern to see what sealife we might have picked up.  We gathered around a sorting table and as the net was being hauled bottles of wine, a pitcher of soy sauce, and a container of wasabi were placed out. Both my marine biologist and foodie senses were on high alert! 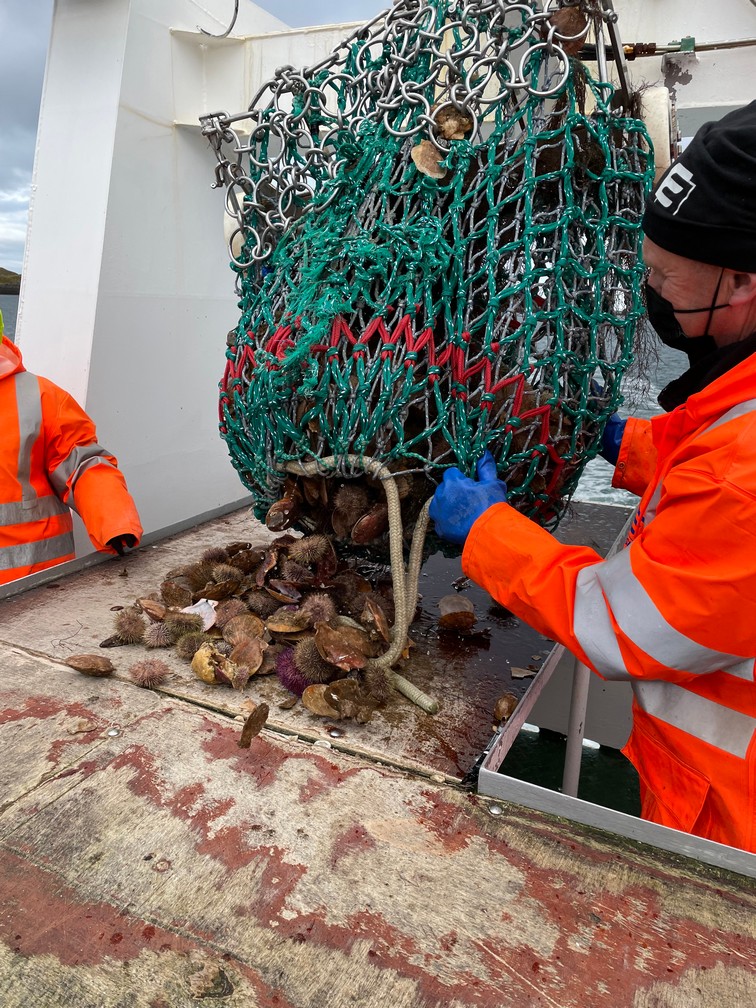 And then the net arrived and was opened. Let the seafood feast begin!  Fresh raw scallops and sea urchin roe were on the menu. Mixed into our bounty were two types of crabs, sponges, three types of starfish, and more. I was happily feeling both my stomach and my geekiness. 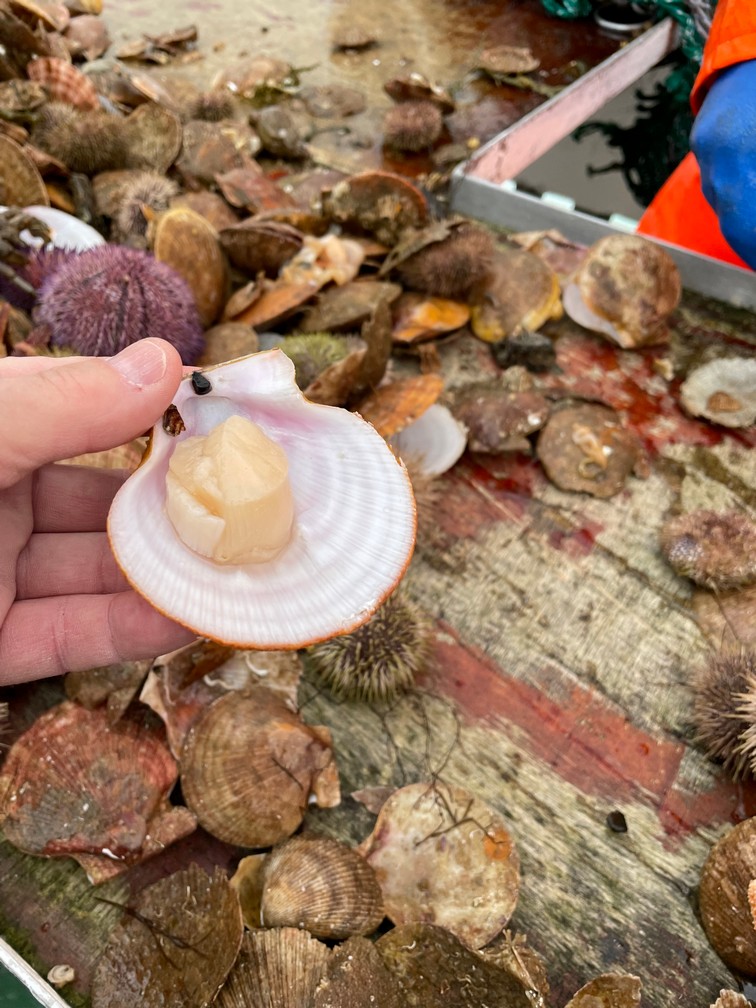 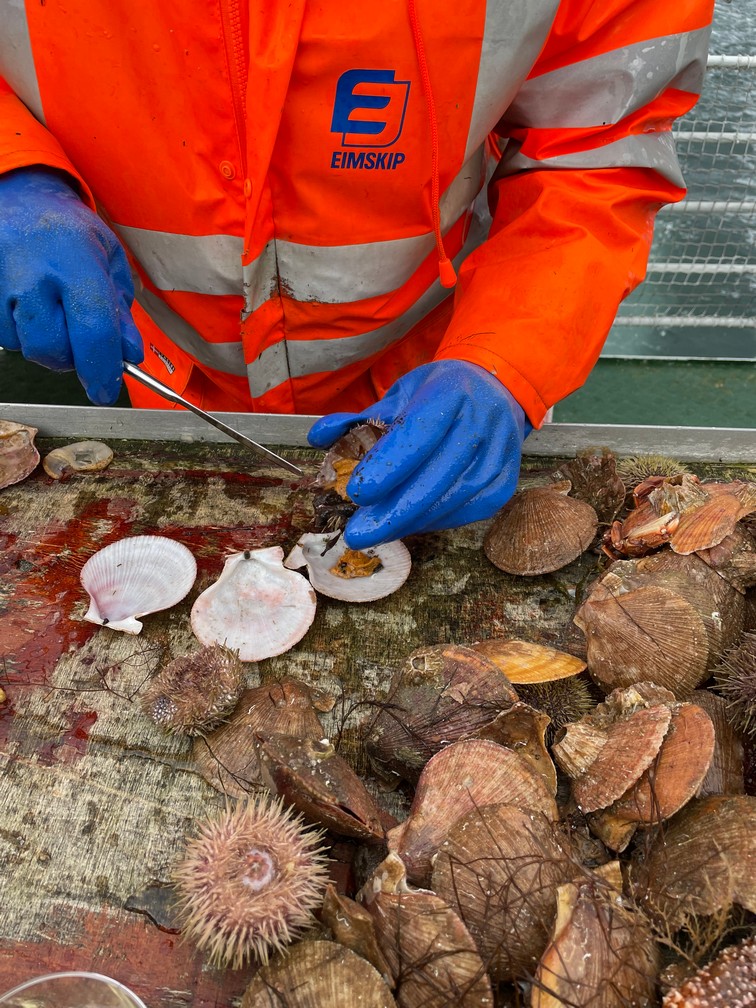 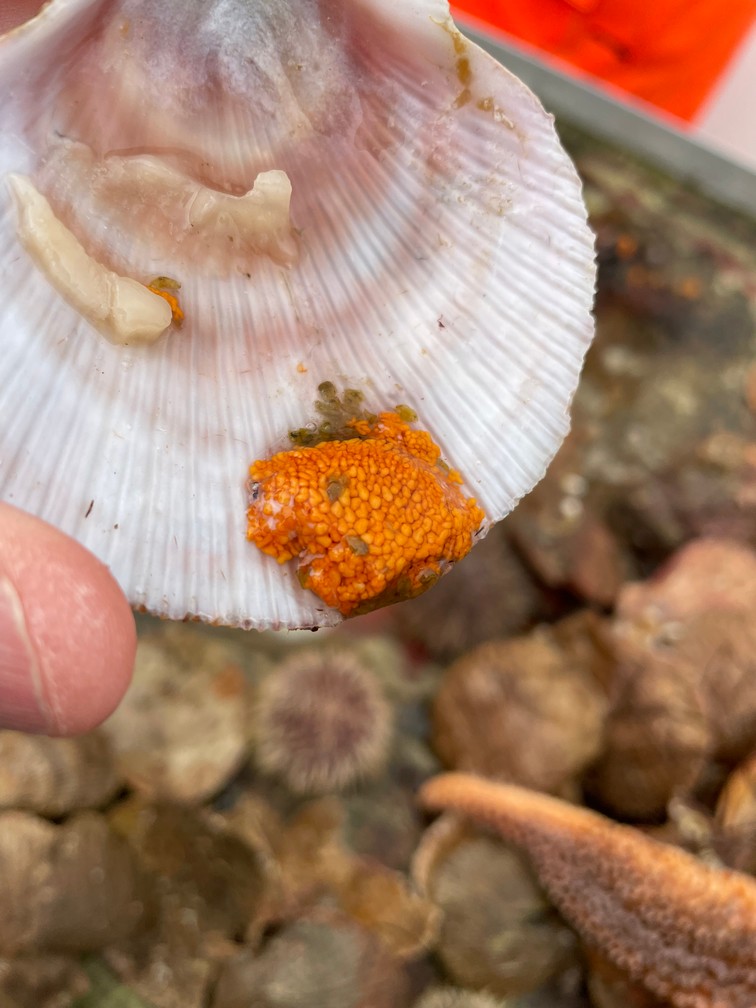 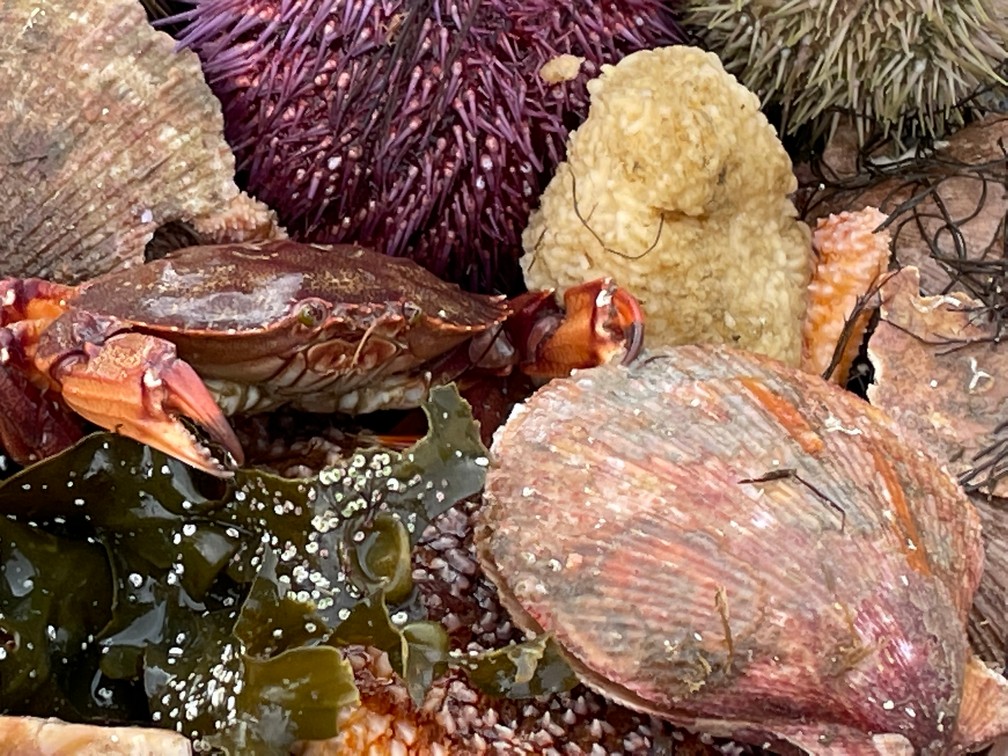 The crew dutifully opened the scallops and cut open the sea urchins, placing the roe (uni for those sashimi lovers) into empty scallop shells. While most everyone tried the offerings, I was fortunate that after a taste most were sufficiently uncomfortable with raw seafood to leave it to me…and I must have savored over pound of scallops and a couple of dozen servings of urchin roe. Yum!

Not done, as we began our return to port, inside the staff set up a table with raw cod, raw scallops and small shrimp…all to be added (as you wished) to a delicious and rich lobster (languostine, actually) bisque. 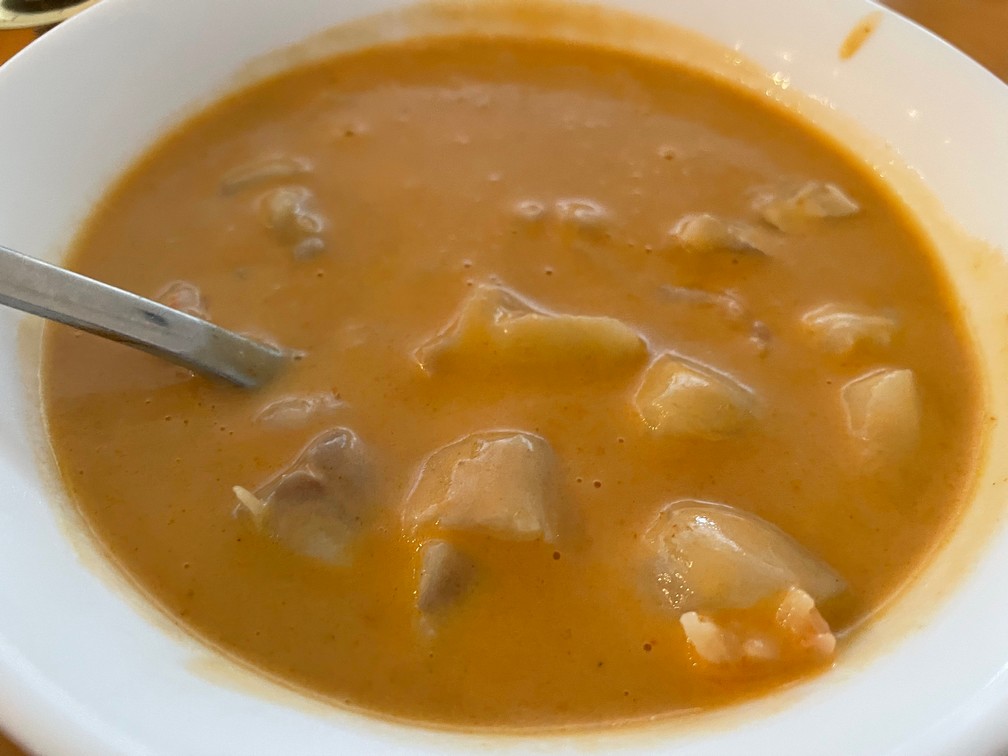 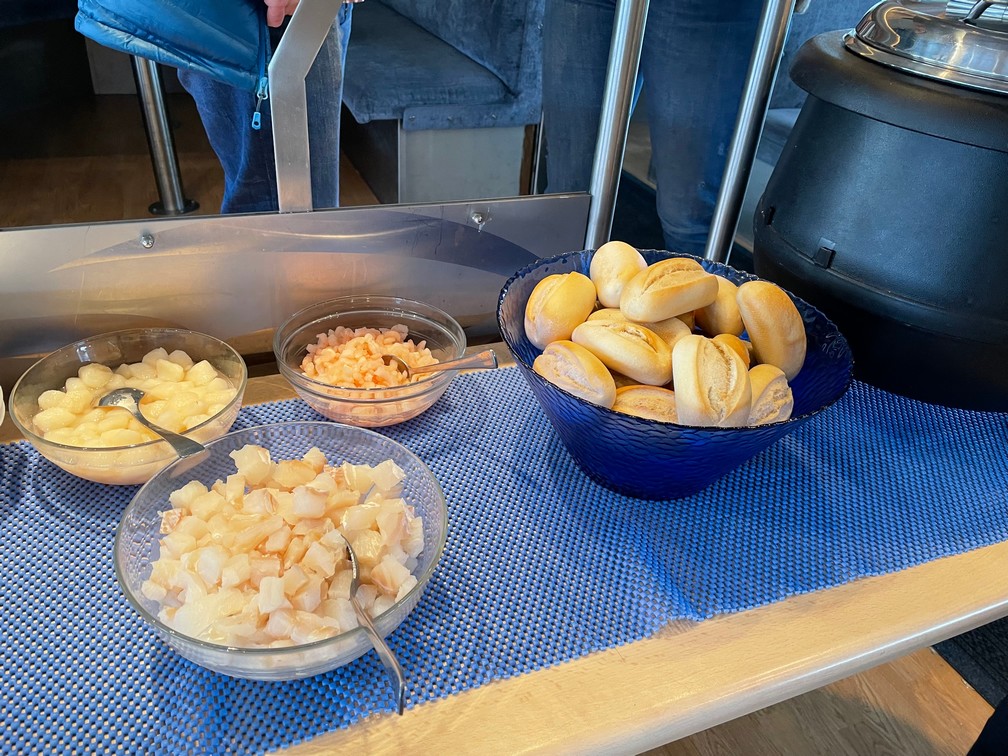 The staff and crew were great, the views amazing, the fresh salt air exhilarating and the freshest of fresh seafood was incredible. One can purchase single seats on this in-season three times a day tour or charter out the boat, for a truly fun, delicious, and beautiful event that will end with smiles and a great memory.

Now prepared for the long ride heading back to Keflavik, we settled in for more Icelandic sagas and stunning views on our way to Dalir. 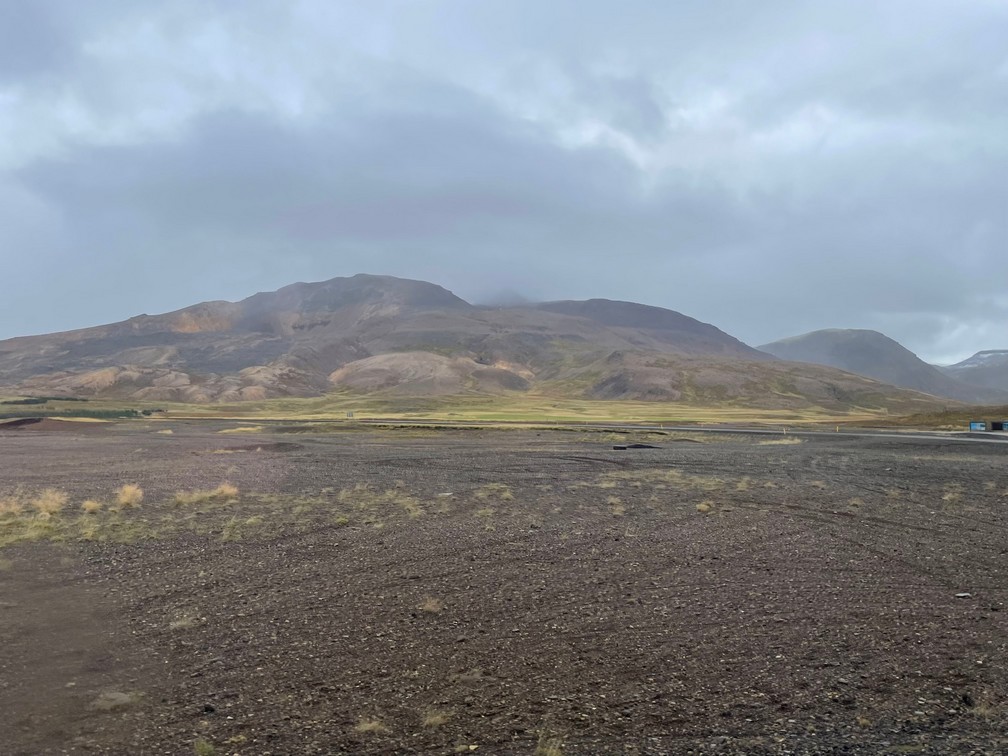 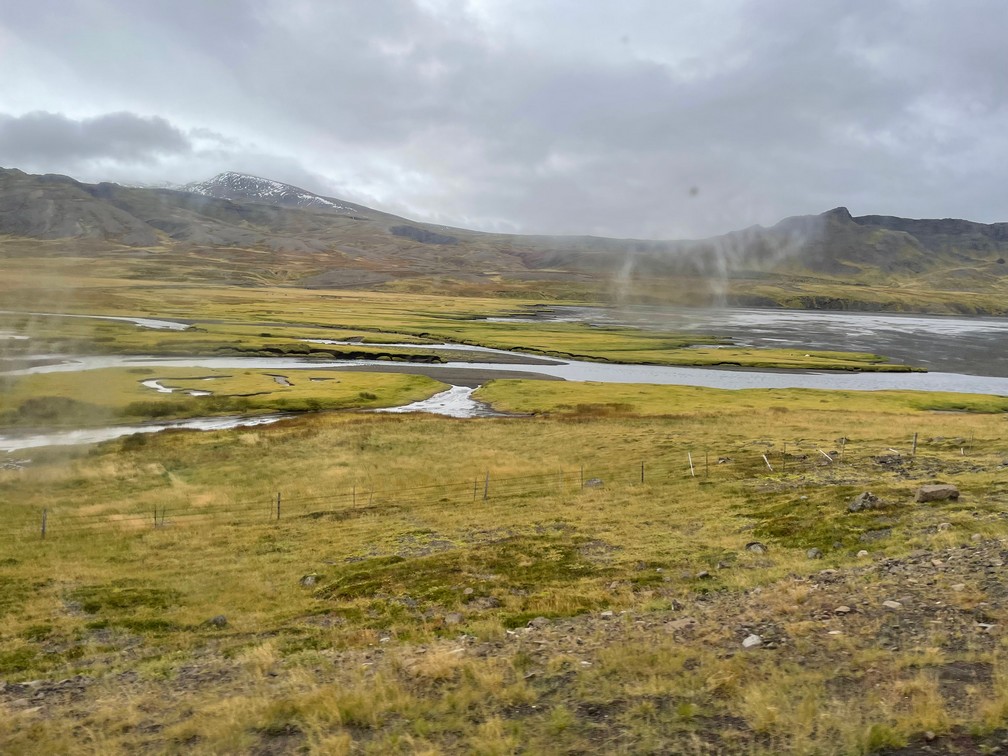 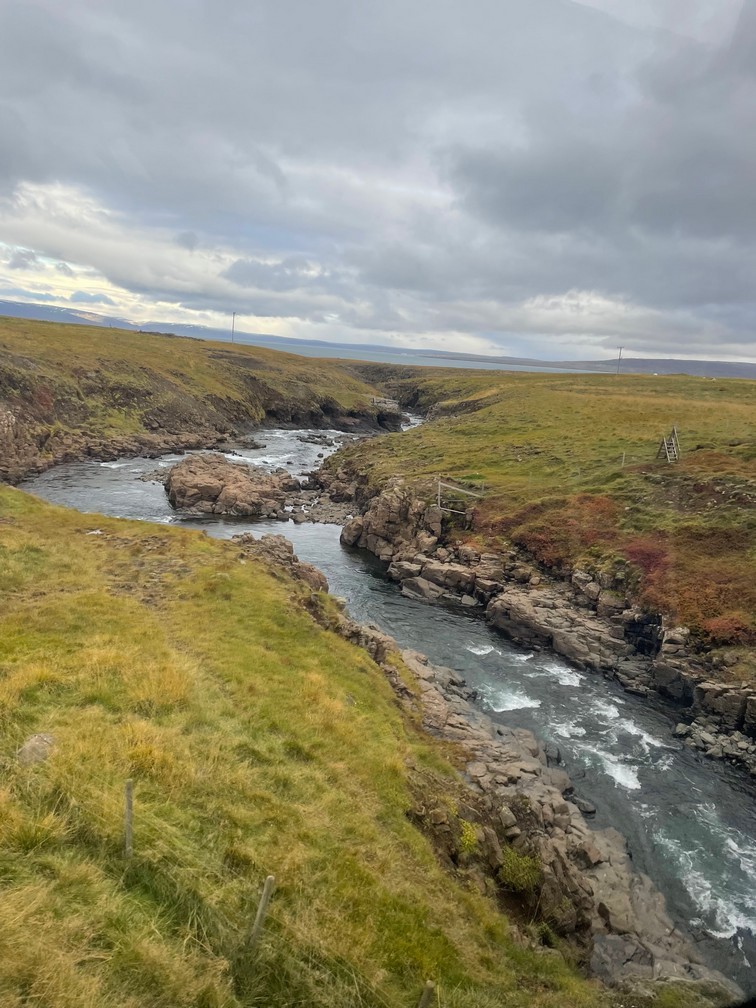 That is until two Viking women blocked the road and boarded our bus!  Yes, it was about as hokey as you can get, and with our bus also being escorted by a woman with two Icelandic horses, we were about to meet some of the nicest, most genuine, people of our journey (and that is saying something!) 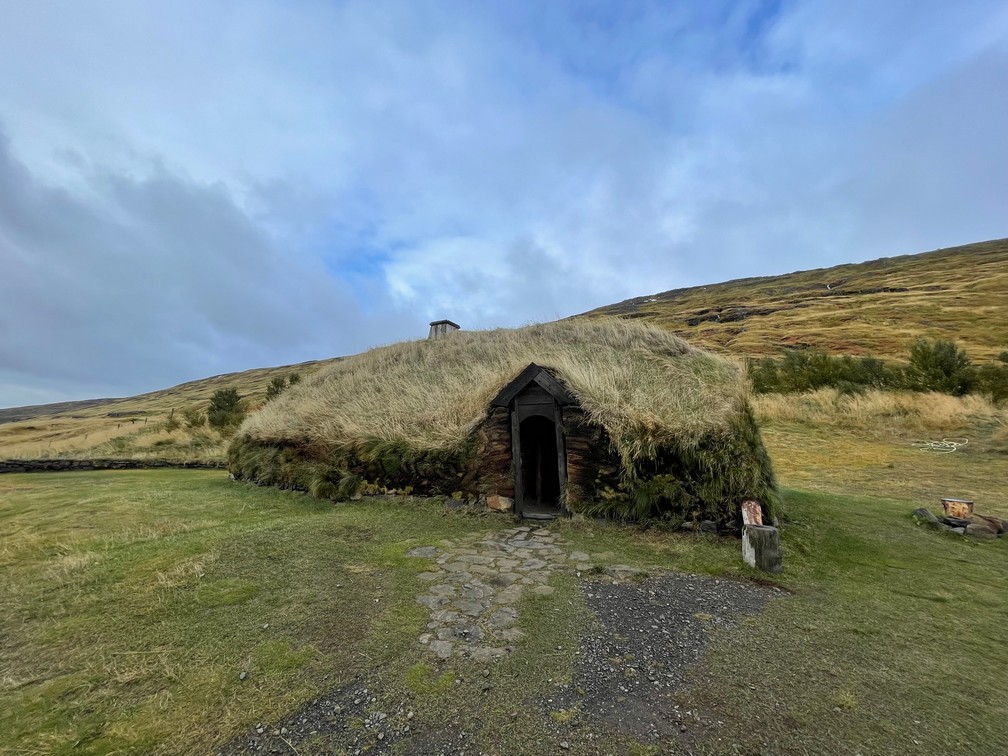 Our first stop was a reconstructed ancient Icelandic home. We sat inside this grass-roofed wooden three room structure and were subtly given a real history lesson – with a few sagas thrown in along with some information on Erik the Red – and how archeologists have been working for decades to discover not only the building techniques but the ancient Icelandic history (which only goes back a few centuries).

And we were able to pet a couple of Icelandic horses. They are so good looking! (And you can rent them for wonderful rides in the countryside. I did this when on the maiden voyage of the Seabourn Sojourn and it is a great experience.  Just be sure your trusty steed has the magic fifth gate, which gives most Icelandic horses an incredibly smooth ride.)

After that we headed to the Leif Erikson Museum where we were greeted by about two dozen of the locals along with another delicious buffet. (Have I said delicious enough on this trip?)

And then I saw it. It was horrible. It shocked my entire being. I had never seen anything so wrong, so offensive in my life. I shudder to even describe it. It wasn’t the world-famous Icelandic putrified shark. No, it was worse!!

It was pizza with fruit jam on it.

However, it became a great bonding experience with one of the men challenging me to eat it. And, once again, food was the thing that brought different cultures and people together!

After a round of meeting each of the locals, who explained their businesses (guest houses, animal rescue farm, etc.) it was time for our tour through West Iceland to come to an end but not the end of my third Icelandic journey!

It was a long drive back to Hotel Keflavik and I used the time not only to sightsee, but rest up a bit. 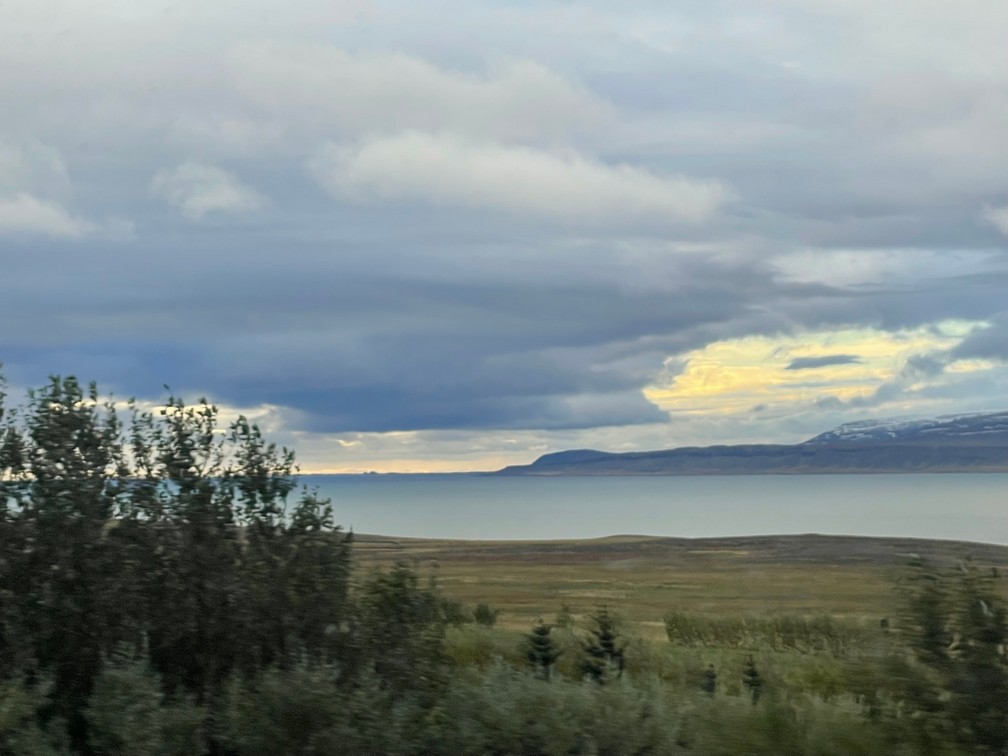 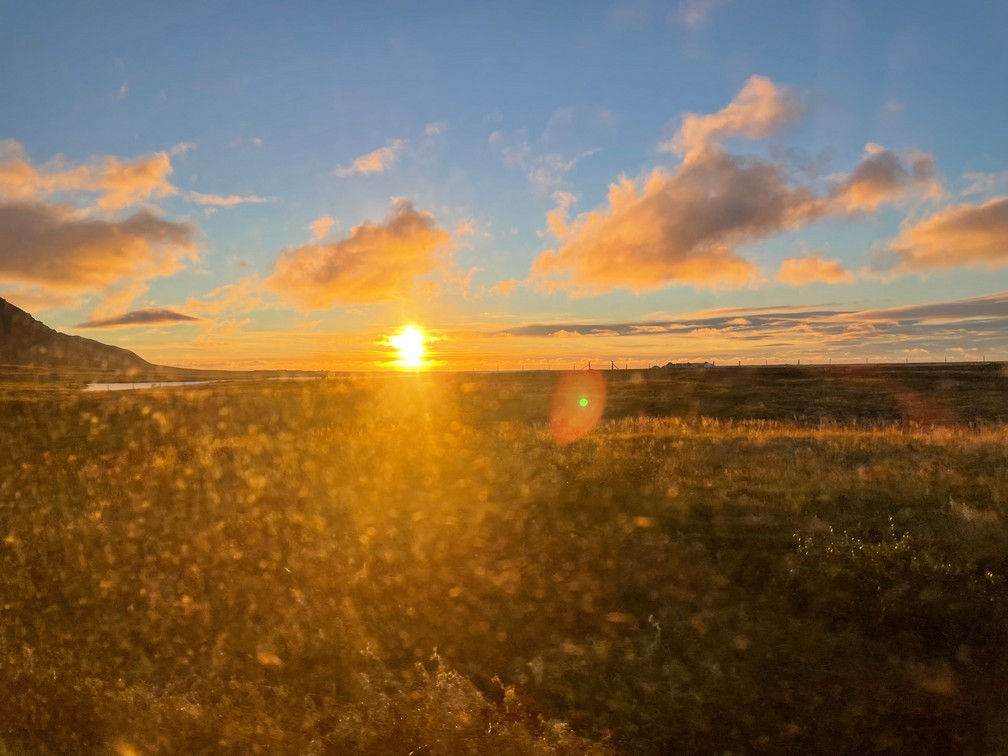 After checking back in and getting myself organized I headed down to the bar for a cocktail before calling it a night.   I do have to mention that its staff is wonderful and its eccentric owner is charming.

I won’t bore you with the details of the trade show, but after the first day there were tours. I chose the small group tour to the Mt. Fagradalsfjall volcano. Of course the volcano had active lava flows until a week before my arrival, so no awesome photos of that. However, the experience was still memorable.

We arrived at the base of a mountain next to the volcano and hiked up its spine on a fairly well marked path…in the pouring rain. We stopped about half way and then about three-quarters up. I thought, “If I could just go a bit further the best view would come in sight”, so I kinda left my group and wandered up…and there it was! 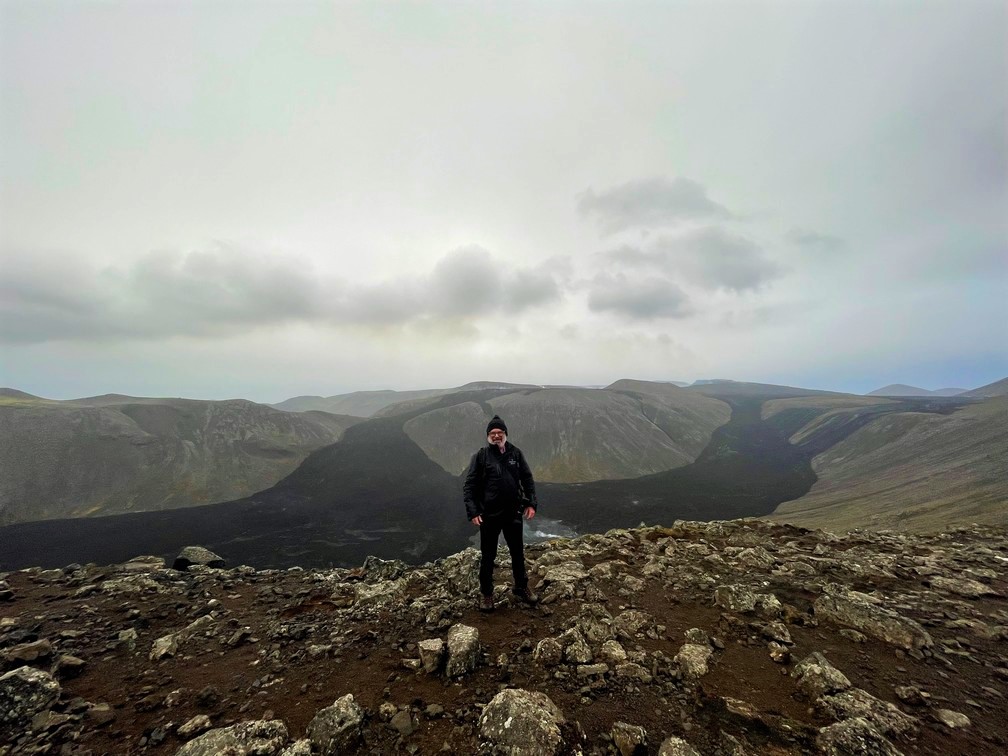 We then hiked down and over to the lava field itself. Steam was venting and a slight sulfuric smell was in the air. Just breathtaking. 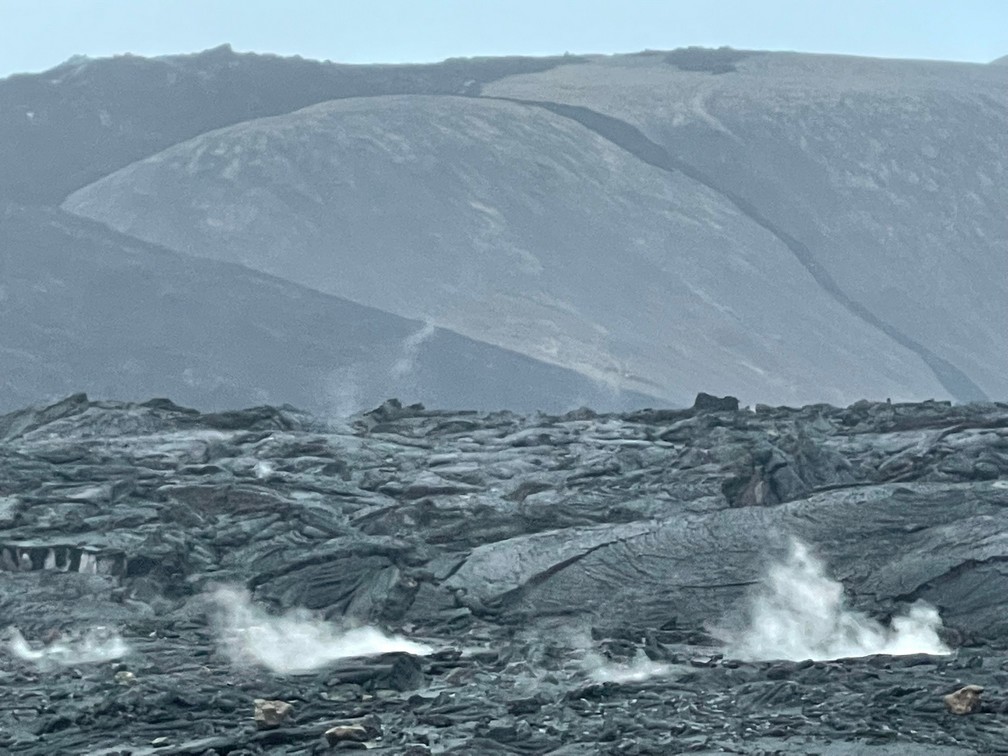 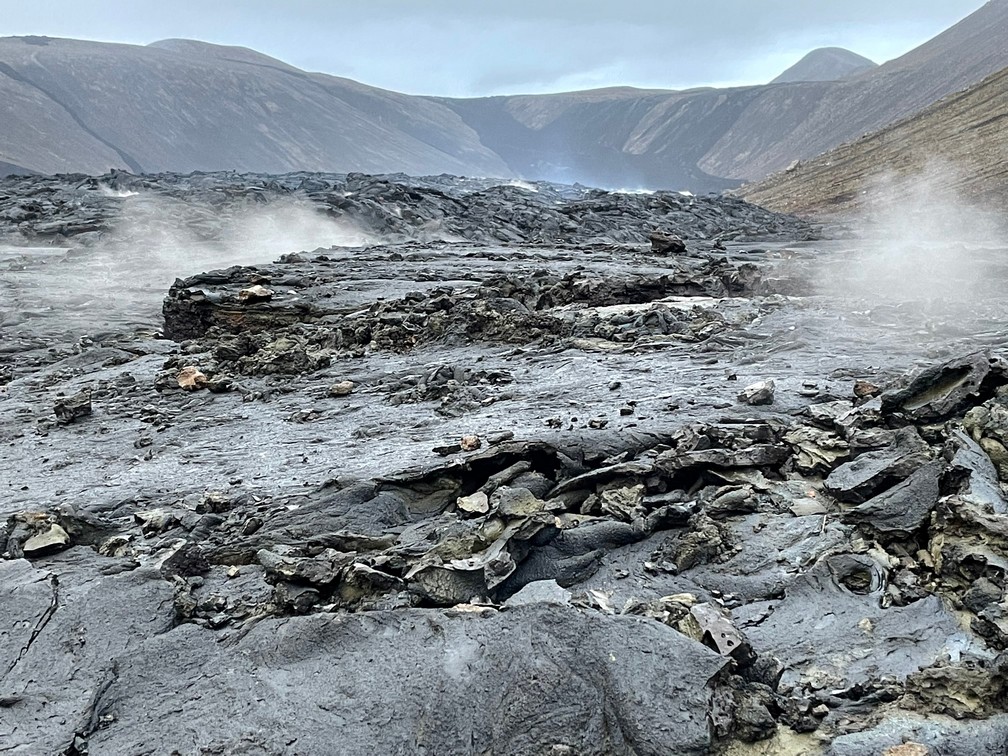 Wet and happy we then headed right to the Blue Lagoon for a cocktail, but not for a soak in one of my least favorite places. (The Blue Lagoon is actually man-made and uses outflow water from a geothermal plant.  There are better, and real, geothermal spas that are more worth your time; including a new luxury one, Sky Lagoon Spa, in Reykjavik.)  There is a new luxury hotel there called The Retreat. It is nice, but…and it is a bit but…it is in the middle of nowhere (as is the Blue Lagoon due to why it exists!)  So if you stay there you will be a long and expensive taxi ride to anything.  And with so much to do and see in Iceland, I would recommend a lesser property in a superior location.

After Vestnorden was completed there was one heck of a party.  I mean I know Icelanders know how to party, but when the itinerary said Cocktails at 6:30 PM and transfers back to the hotels at midnight, we all were shaking our heads. Well, suffice it to say Iceland put on quite the show and they were dragging us out onto the buses at 12:30 AM!

Oh, yeah, I actually did some serious work on this journey and have some great connections and fresh ideas for your visits to Iceland, Greenland and Faroe Islands. 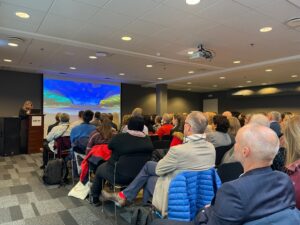 You know those folks that ask how many countries have you been to? Iceland is a poster child for why I don’t believe in counting countries. I have now visited Iceland three times, doing different and amazing things each time.  Do I feel like I have “been there and done that”?  Absolutely not. There is so much more to see and do I cannot wait to return!