Disaster-proofing Travel with Patience is Required

Getting there used to be, at least for me, amusing for others as my various travel ordeals seem to entertain.  For many it was an exciting time to enjoy sipping champagne and lie-flat business class seats. But times are different and there is just nothing amusing or joyful about air travel post-Covid. One definitely needs to “disaster-proof” oneself more than in the past.  And, I am not talking just about domestic travel in the United States, but travel pretty much worldwide.

Attempting to disaster-proof myself…to assure I arrive…I had originally booked a 12:30 PM flight from Reno to San Francisco with an almost two hour layover before my flight to Paris. However, since last month’s similar flight was delayed over two hours I decided to take an earlier 9:15 AM flight and just hang out at the United Club in San Francisco before my flight to Paris, France.  Better there and bored than not being onboard the plane!

Well – and I do compliment United for its now excellent communication – due to staffing issues (mandatory rest period conflicting due to earlier delays) my flight would be delayed until 10:25 AM…unless a substitute flight crew was obtained.  That meant I could risk it and assume a 10:25 AM departure and if it left early I would be stuck (hoping to get on that 12:30 PM flight) or I could check-in for the original boarding time. I chose the latter. Disaster-proofing.  This made for a long day to be even longer as waiting around an airport is exhausting. So, there I sat in the Escape Lounge in the Reno airport and I waited. My flight was even a bit later, but it was fine as I had a five-hour plus cushion.

After hours of sitting in the San Francisco United Club, it was time to board my on-time flight to Paris, France…until it wasn’t. The plane and flight crew were there, but the cleaners – also short-staffed – were not. But the plane was eventually cleaned after a 45-minute delay and I was off to Paris.  (BTW, United as definitely improved its food – still not cuisine – and service…other than the chocolate ice cream that a flight attendant dropped on my shoe and didn’t tell me.)

At this point, I figure I was lucky. I made it to Paris within an hour of my scheduled time…and I also had my luggage. So you think there were no disasters? You are going to have to wait for my next article for the reality check!

As I mentioned in my first article, I was doing the pre-expedition arrangements through Ponant. The documents say that it is a two-minute walk from the airport train to the hotel. That is true. However, what it didn’t say – and if you have been at Charles de Gaulle Airport you can appreciate this – you must traverse the entire airport, including going down two escalators, with your luggage which – and I am fast – takes about 20 minutes. If I were to do it again I wouldn’t rely on my luggage’s wheels, but would take a trolley as far as I could.  If you aren’t as mobile, definitely take a taxi or Uber.

I Had Never Been to Paris (The Bad. The Good. The Surprising.)

Well, I can finally say I have been to Paris, France so all those shocked reactions to my – of anyone – never having been there can relax.

Of course, with a morning arrival my room was not ready, so I dropped my luggage at the Pullman Roissy, an airport hotel, and took an Uber into Paris.  Again, “they” (not Ponant) say that taking the train is easy and inexpensive. Sorry, I am all about convenience and I was not going to get involved in the logistics of getting to the train to take another train and then deal with schedules, etc. and then the logistics of getting where I need to be. An Uber picked me up at the hotel and drop me off exactly where I need to be for about $50.00 and 30 or so minutes.

Never having been to Paris, I purchased a five-hour private walking tour through Viator for $299.  However, I used my travel agency to book it, so there is a small commission. But there also was a 10% Rakuten rebate and, when I didn’t immediately book it, a “pay with PayPal and get $20 off” deal became available…so it was a very good deal.  But I had no idea how good a deal it would actually be! 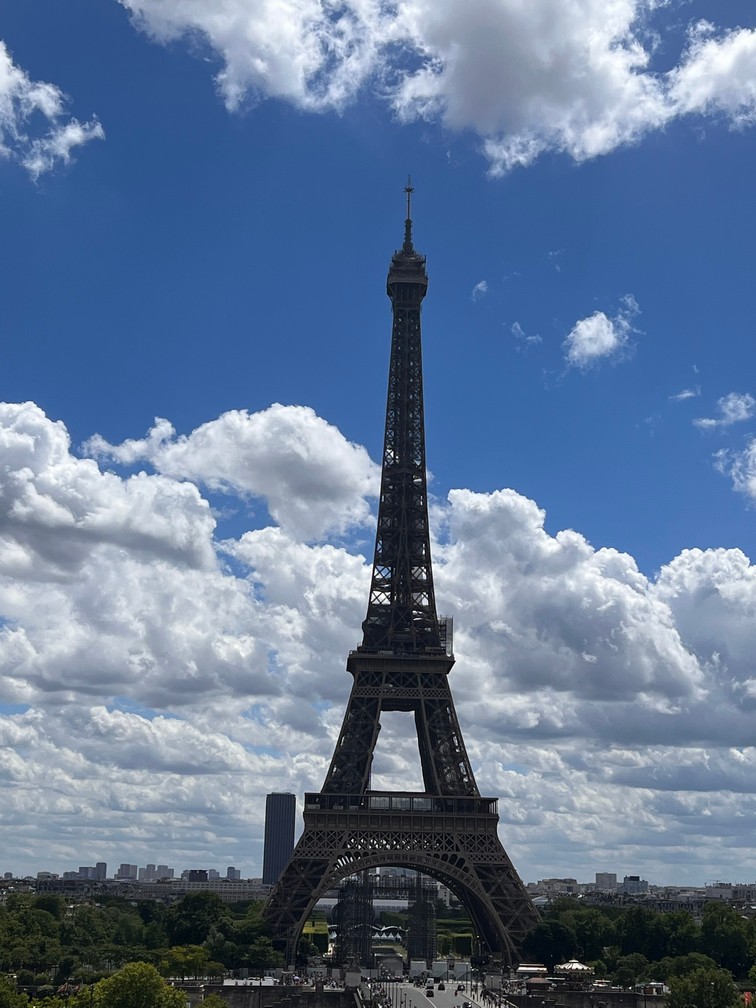 I arrived at the meeting point about 45 minutes early so I figured I’d wander the area. My children told me that the Eiffel Tower was “underwhelming” and, to be honest, when I got out of my Uber at the Trocadero I was “OK. There it is.” followed by, “OMG! I am surrounded by one giant school trip!”  Between all the screaming children, the unenthusiastic teens, the brides taking photos, etc. I felt more like “Get me to Times Square in New York City for some peace and quiet!”    It was not a great first impression of Paris, but I saw the Eiffel Tower!

After my wander, it all changed. My guide, Anna, found me, and while I was expecting a French greeting, I was met with a Russian one.   Oh, this is going to be interesting! Anna made my day: Knowledgeable. Charming. Flexible. Willing to put up with my teasing. (When do we go for French wine and cheese. Now? How about now?). To be honest, I thought I would use about two hours of my five-hour tour to get oriented and then be on my way. But, instead, it was five hours of not only seeing and learning a bit about Paris, but very timely political and personal conversations. 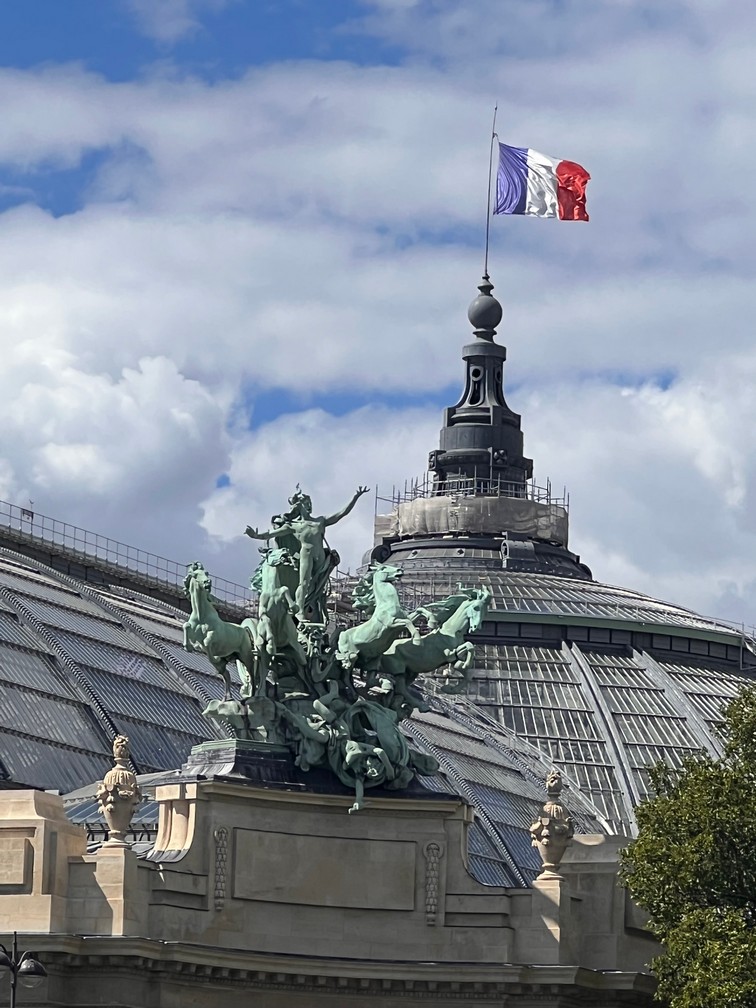 It is, alas, why I love to travel.  You never know who you are going to meet and what will come of it. Just imagine wandering through the parks and seeing the French highlights while discussing the Russian invasion of Ukraine, the sanctions, views on Putin (not all are negative), U.S. – Russia relations, the effects of not eliminating Stalin-type thinking, and Louis XIV, Napoleon III, copying Versailles in some Russian palaces and more. 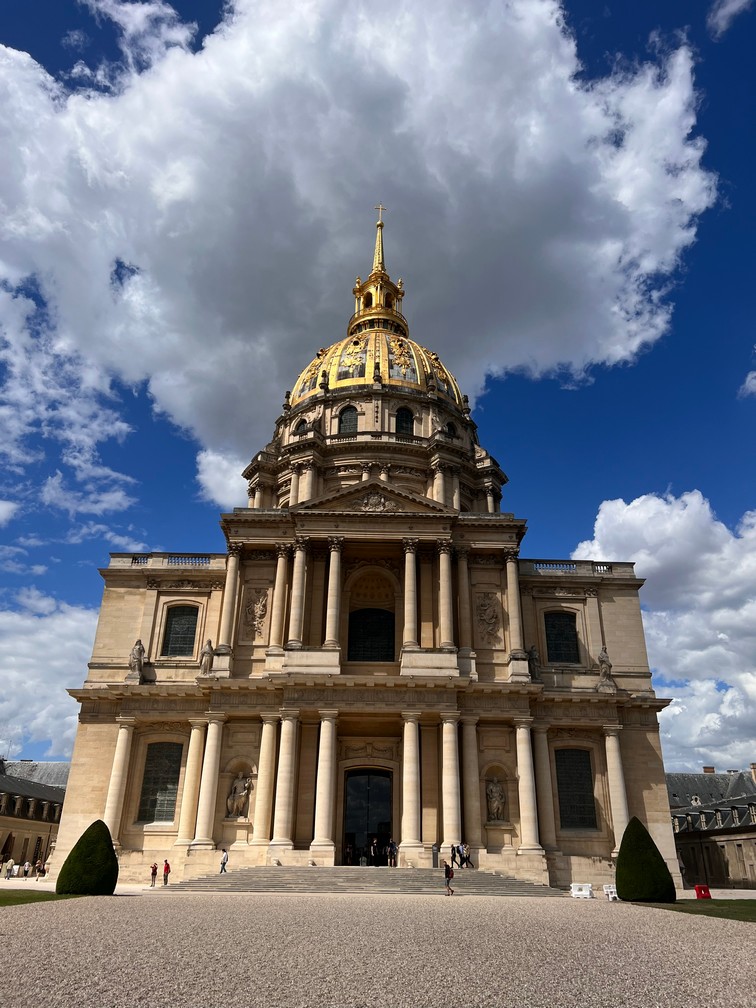 Not to worry, the romance of Paris – wasn’t that supposed to be the main topic? – was also discussed as well as some of the relevant artists and exhibitions.

I could tell the buildings and concepts that Anna found most interesting and I paid more attention. It was enjoyable waiting for her “tell” and seeing she enjoyed some things as much or more than I did. There is nothing better than a guide that loves where she is, loves what she is doing, and cares that you have your day; not simply the delivery of just another tour.

And, to be sure, with travel moments like, “An American and a Russian walked through Paris and had an unexpectedly good day” it inspires one (me) to travel even more. 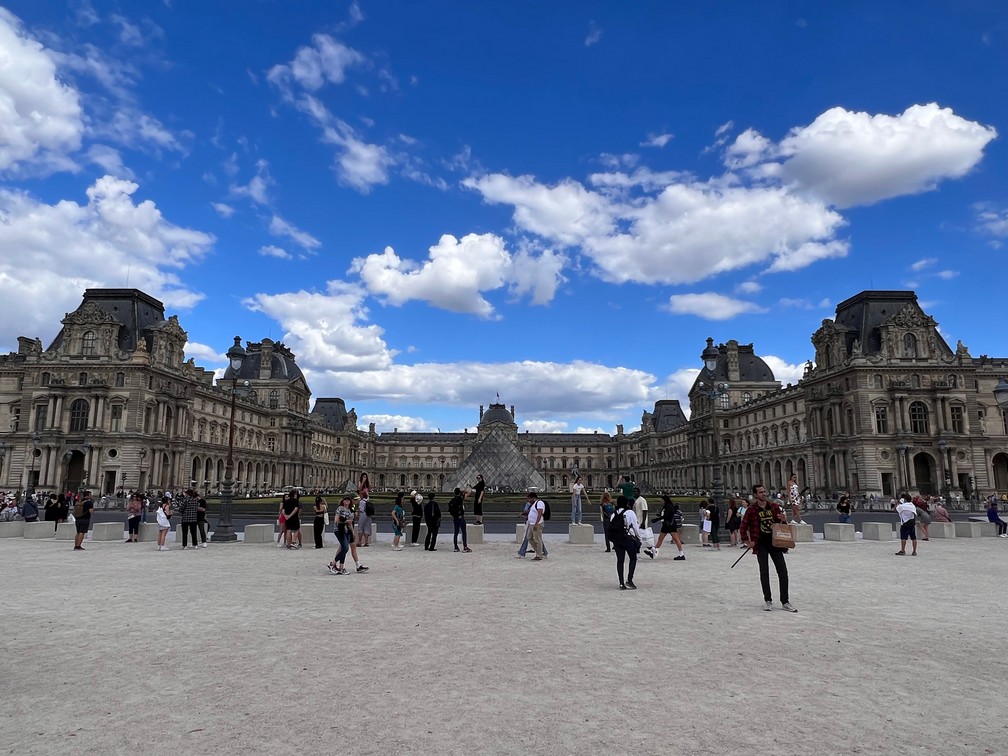 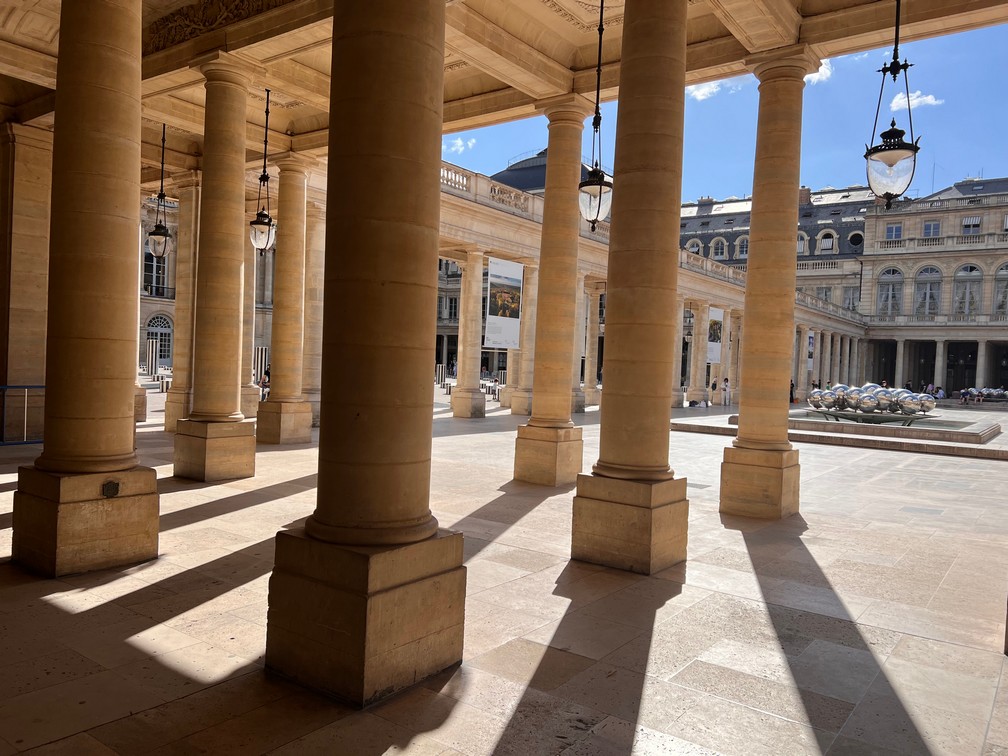 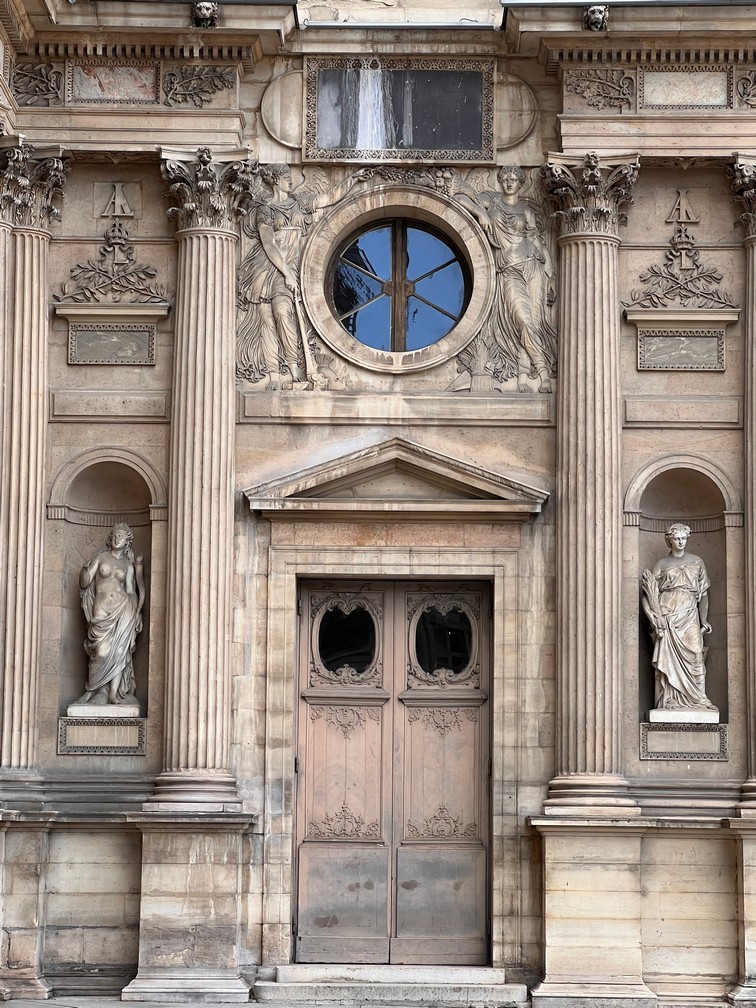 Toward the end of the tour, we took a break while I had a glass of rose in a plastic cup while sitting under some trees in one of Paris’ many parks.  (No cheese though!) 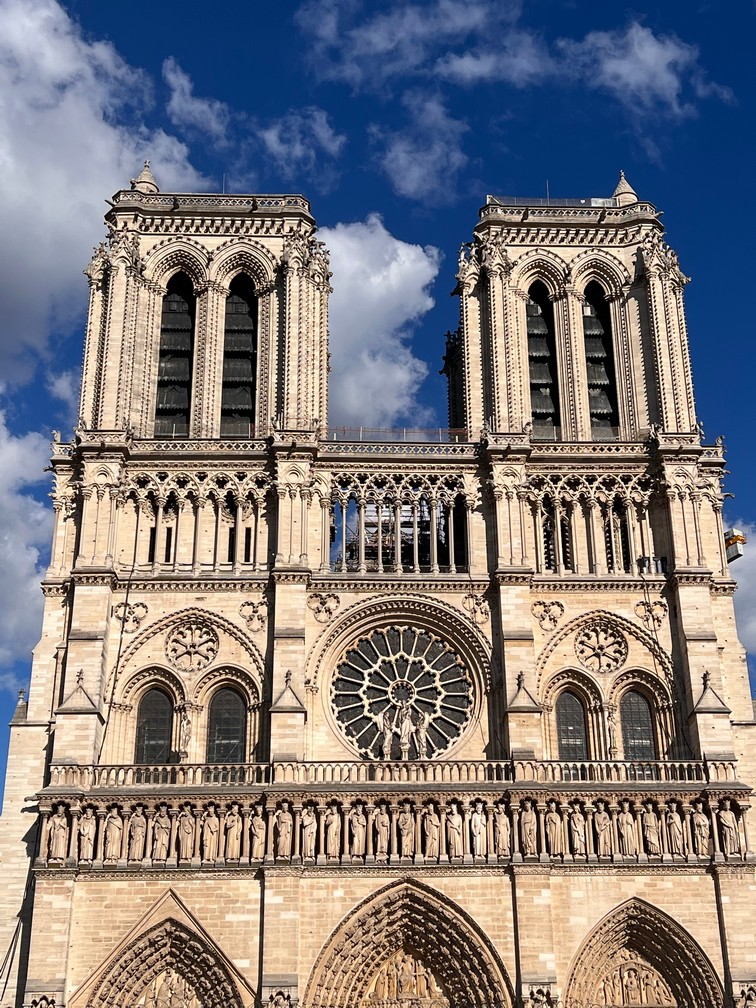 Later, as we were strolling toward Notre Dame and I, once again, said, “When are we getting French wine and cheese?” – noting I really wanted them – and then I saw Laperouse; not the Ponant ship, but the restaurant.  It just spoke to me, and you know that is how I find the best places:  They tell me, “Dine Here!” Granted I was hot and wearing the same clothes I traveled in, so it wasn’t like I was properly dressed, but I decided that was the place…if they let me in. 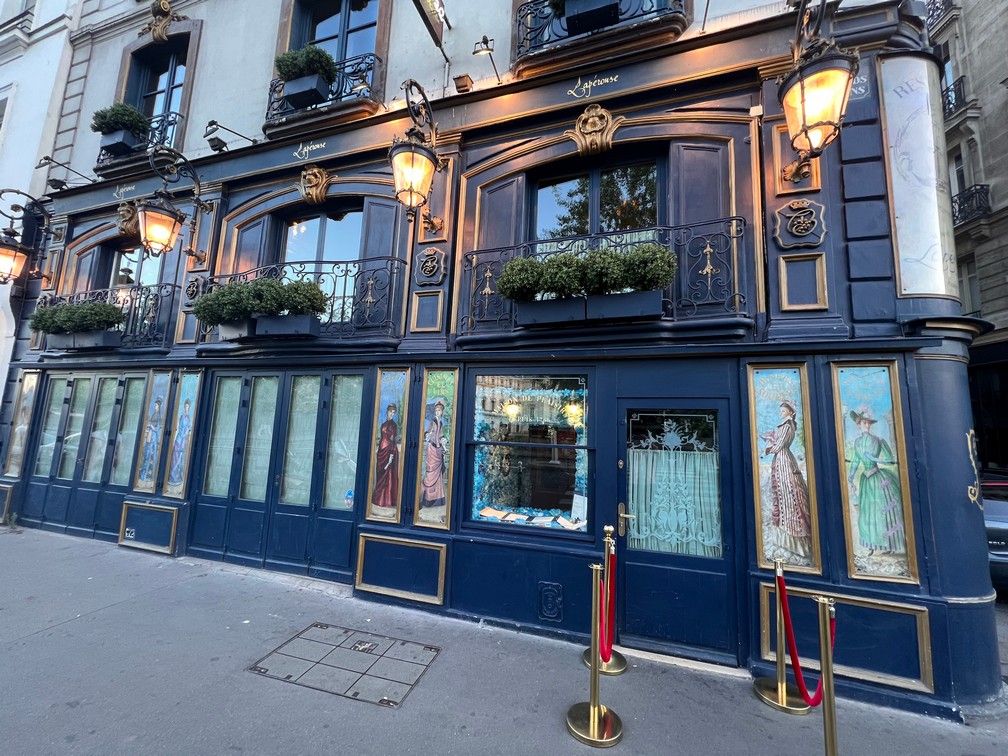 After seeing the remnants of Notre Dame and the Shakespeare Book Shop, my tour ended with Anna walking me back to the restaurant.  And then it was time to, well, step back in time, though it was a shame to be dining solo in such a romantic restaurant…but I did what I had to do!

Laperouse was, many years ago, a three Michelin star restaurant, but it has gone through a number of iterations since. I did not expect the cuisine to be amazing, but sometimes the ambiance is just as important as the cuisine. And, well, you aren’t going to get more ambiance than here even if dining early (about 7:00 PM) is a definite tourist move. 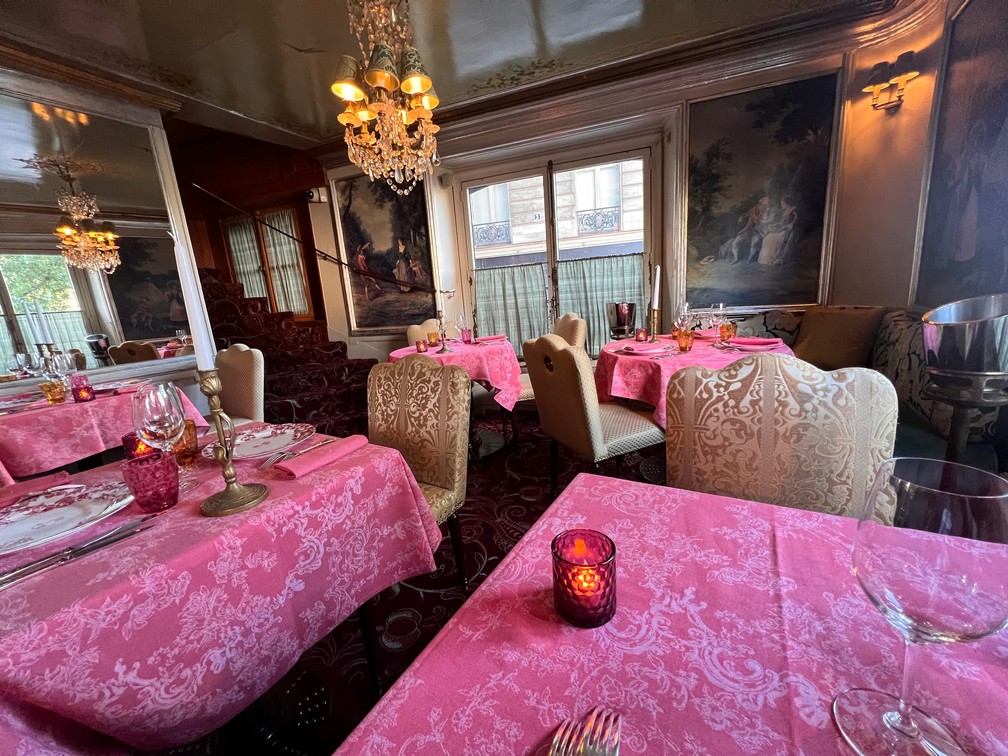 I decided to order a reasonably priced 2006 Chateauneuf-du-Pape – selected from its somewhat pretentious enormous wine list.  Of course, they didn’t have it, but did have its 2015 cousin. Good enough.

Time for some wine, great crusty bread, and delicious French butter. No, wait. Before I could say “carafe” a 10€ bottle of Evian water was on my table. Oh well; the price of being a tourist dining at 7:00 PM.

I ordered Duck Foie Gras with a corn and curry chutney and brioche. It was a pate, which is not what I was expecting, but it was very good; especially as I let it sit and warm up to room temperature. The brioche was good, but I went back to that loaf of crusty bread. 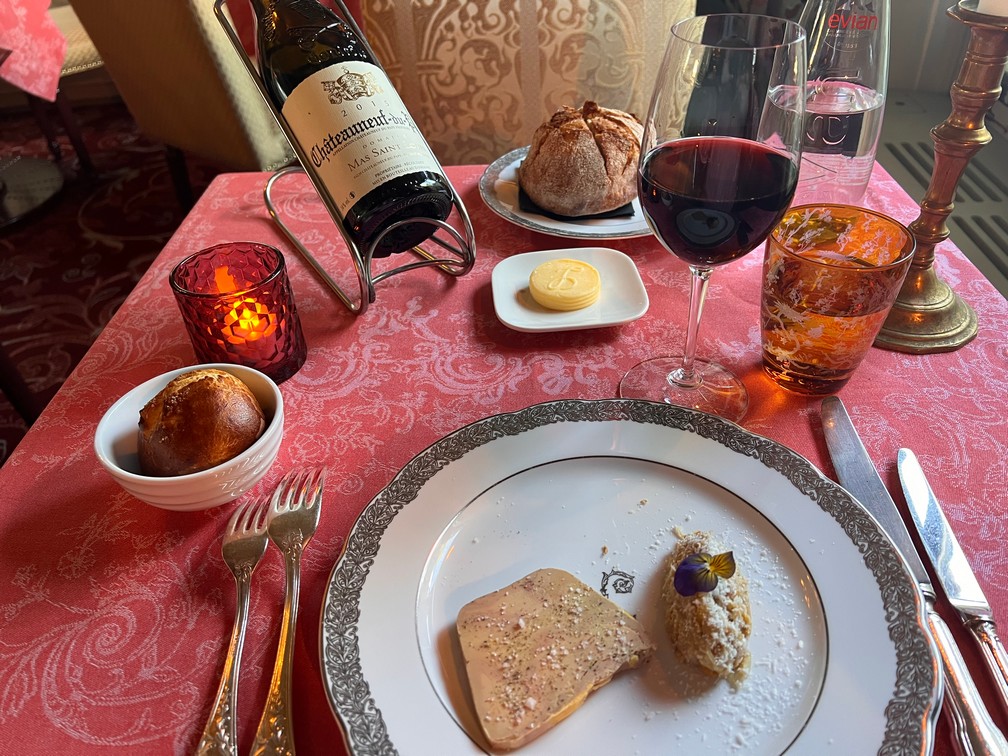 For my main course, I ordered Royal Sea Bream Flambe with Absinthe and Grilled Fennel.  I mean it was about as old-school French as I could imagine and the use of absinthe was intriguing. It was a great choice! 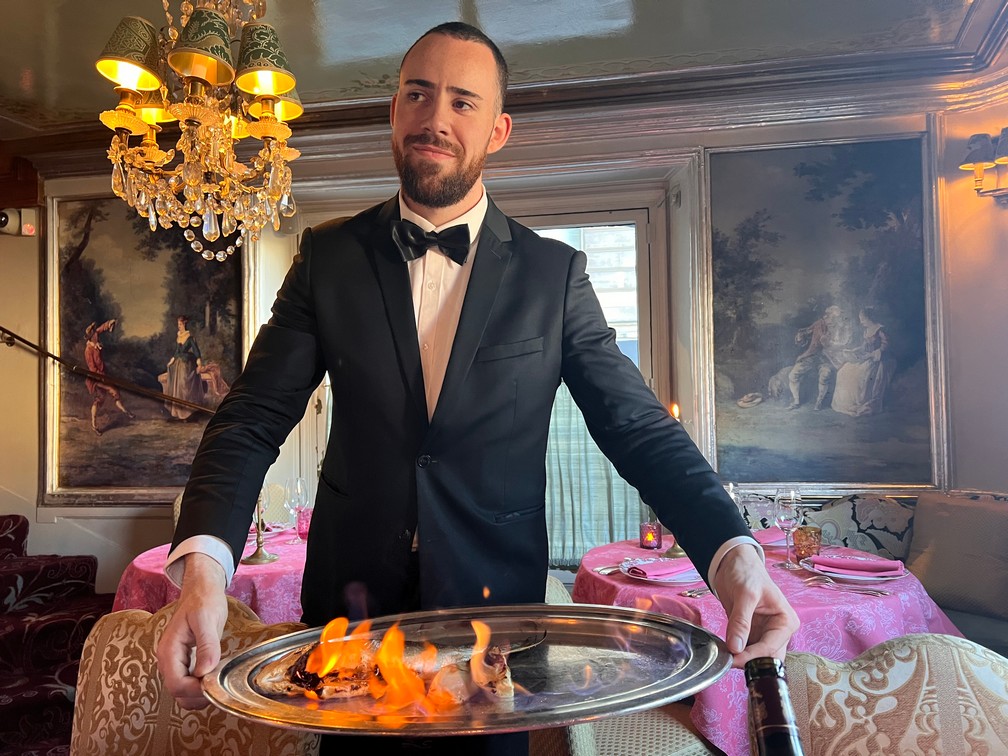 The waiter arrived with a silver tray with my fish ablaze, only to be returned a few minutes later beautifully deboned and displayed.  It was not only a showstopper, it was delicious.

Now it was time – finally – for those French cheeses. But it wasn’t. I was not going to pay 38€ for a small cheese presentation.  A small disappointment, but also possibly a good enough reason to return to Paris.

I actually wasn’t excited about seeing Paris. I am not a “city and look at buildings” kinda guy. But I have to say that I do like Paris. Next time, whenever that is, I will seek out the less touristic Paris.

When are we getting French wine and cheeses? Now? How about now?

Next up: The Ponant Experience Begins: Smooth Sailing or a Rocky Experience?