How Sick Am I Reading About Seabourn Dress Code Changes? Formal Equals Not Elegance!

Not nearly as much as I am about the failure of most (not all) to realize that putting lipstick on a pig doesn’t make it beautiful (unless, of course, you are another pig).

Yesterday I received an email from one of my clients on the Seabourn Odyssey’s World Cruise that I thought was spot on.  He wrote:

“Concerning the dress code: there is an older group of people who want the formal nights and everything around it. For us, it is not necessary. I have my tux with me and I wear it on formal nights.

We always follow the dress code, nothing more, nothing less.  It would be a good thing when everybody did that.  People who are calling for formal nights appear in the dining room on casual nights with a shirt, tie and jacket….

What we like on Seabourn is the elegance and that is not the same as ‘black tie’. Times are changing….”

There are two interesting observations:  (1) Elegance and formal are not one-and-the-same; and (2) There are those who insist on formality even when it is contrary to the dress code.

To be brief, because truly that is all that is required, a hideous gown is not elegant, a tux that is three sizes to small is not elegant.  Elegant is elegant.  We all have seen elegance…and you know it when you see it. 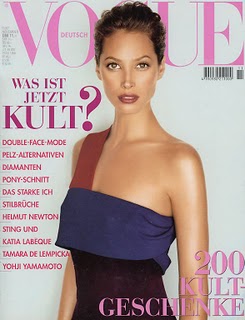 A dare any person to say that Christy Turlington showing up in The Restaurant dressed without a single piece of jewelry and this simply cut dress would not be the height of elegance.  Alas she is not dressed “formal”.

After the men picked their jaws up off the floor (if actually possible) and the women marvel at her appearance, they turn to the gentleman sitting at her same table in a very expensive tuxedo that is two sizes too small and is a bit crumpled at the lapel who fails to rise as she approaches the table.  This gent is dressed “formal”, but has no elegance.

On the flip side, I truly do not believe that a couple that dresses rather formally on a “casual” evening (i.e. not an “elegant causal” evening would truly have a problem enjoying themselves dressed to the nines on an elegant causal evening.

But then again, I must ask, “Is it appropriate for them to impose their formality when it is contrary to the ship’s announced dress code?”  Isn’t there the possibility that doing so makes those around them as uncomfortable as when they are well dressed (though not formally) and someone arrives at the restaurant in jeans and a tennis shirt?

Seabourn is maintaining its elegance and continues to be more formal than most every other cruise line, but just not as formal.  As another client (who lives and works in a toney part of a major international city) wrote to me yesterday upon hearing of the end of formal nights on seven night Seabourn cruises, “My husband is so excited to see on the website itinerary that there are no black tie evenings scheduled on these two weeks. Is that really the case? If so, that is less packing to do for sure! We’re all for dropping the black tie dress up night. I think that is terrific! That formal night in summer is such a pain in the you know what. Summer night elegant dress is so much better! Yeay!”

Do many of you see the silliness of it all…yet? The clothes do not make the man/woman…the elegance of being well-dressed and well-mannered does.