Oceania Marina and S.S. United States – Evolution and Moving On

Two very interesting things happened this past week that most people probably didn’t know about, no less make a connection between:  The arrival in the United States of the Oceania Marina cruise ship and the sale of the S.S. United States oceanliner. 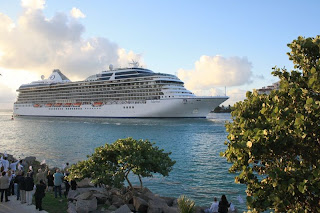 I handled the negotiation and sale of the S.S. United States to Norwegian Cruise Lines, representing her owner at the time.  I have a lithograph of her hanging in my waiting room along with another one charting the history of the Greatest Passenger Lines of the 20th Century:  Rotterdam, Queen Mary, Deutchland, France, etc.  They are all there…and they are all gone.

While the S.S. United States represented, at one time, the finest in oceanliner (cruising) experiences for some, there is no question that her day has come and gone.  I have seen her for too many years rotting away at the Philadelphia pier.  It reminds me of seeing the old Rotterdam stripped and sitting in Gibraltar and how sad that was too.  There are those that have spent thousands of hours of their lives trying to save not the memory of the S.S. United States, but the shell of what she once was.  For some reason these folks believe that turning a steel hull with none of original interior into a restaurant or conference facility is going to keep a bit of valuable history.

“Ships” are a fungible thing. There are two definitions of fungible:  Perishable and Able to be Substituted.  “History” is not such a thing.  History has a permanence, but it also has a life.  The hull of the S.S. United States is fungible, but her history is what we all have the romance about.  And it is her history that, in real terms, we want to remember; for her history is what, in part, makes our present day cruise experiences so fantastic.

So with the Oceania Marina making her Maiden Voyage a transatlantic crossing she, with unintended glamour, has actually paid homage to the S.S. United States as she possibly embarks on her last chance to avoid the fate of almost every great oceanliner before her.

And, look how far we have come!  Oceania Marina is the newest cruiseship in the world (at least for a few weeks) and is loaded with features and options that even the First Class guests on the S.S. United States would have been impressed with.  However, in his classic “underpromise and overperform” approach, Frank Del Rio, chairman of Prestige Cruise Holdings (owner of Oceania Cruises) said, “Upper premium is a hybrid of premium and luxury, and we have not strayed any further into the luxury territory but have most definitely set a new standard on the premium side of the fence.”

The S.S. United States may have had some very beautiful and spacious accommodations, but remember that many passengers were lined up to use the facilities down the hallway and the cabins were less than half the size.  (Not so romantic when you think about it in those terms, right?)

Yes, there was fine dining on the S.S. United States…for some.  How about cafeteria service for most!

The initial reports are that the ship is fantastic.  Being the skeptic that I am, I must wait and see what happens when Oceania stops pulling out all the stops (open bars, upscaled menus, initial adrenaline, etc. all make things better than normal).  It appears that issues with service and flow have been extremely well handled, but are imperfect…as must be expected on a new ship.  But, alas, the number of people giving feedback is actually quite limited.

Now, to be sure, as Frank Del Rio said, this is not a luxury product.  You are going to be charged for things like a reported $0.95 per minute for internet.  I think the guests on the S.S. United States would have gladly paid $1.00 a minute to communicate with friends and businesses while crossing the Atlantic, but alas it is not an option.

So with beautiful accommodations and many dining options…and the onboard experience just first being explored, I think it appropriate to give Oceania Marina a good look.

It is also appropriate to give the S.S. United States a big thank you and its present new owners a reminder that it is not the steel hull that holds the memories that want to be nurtured; it is the liner’s history.