Regent Seven Seas Explorer – Is It The Most Luxurious Cruise Ship Ever Built…Or Are Staterooms Being Sold As Suites?

I know it may be shocking to some that I am actually writing an article on Regent Seven Seas, but here I am doing it.  Why?  Because its design raises a number of interesting questions that I have begun to ponder.  It also telegraphs that Regent Seven Seas has decided to further advance the its position that its market lies with those that either want to show off their wealth or rub elbows with those that do.  What do I mean by that and is it bad? Read on!

First let me better explain the Regent Seven Seas Explorer.  It is a larger luxury ship with 750 guests, all in suites; not dissimilar in passenger count to the Regent Seven Seas Mariner and Voyager…except that the Regent Explorer has many more larger suites (85 in all)….and, as you will see, a plethora of staterooms that it optimistically calls suites, but are identified as staterooms on cruise line ranging from Celebrity to Crystal Cruises.

The Regent Explorer is, to be sure, a different concept to luxury cruising than the one Seabourn and Silversea utilize (which focus on the vast majority of suites being relatively similar in size)…and sneaking into the mix is Windstar, with the all-suite former Seabourn triplets (though not marketed as a luxury cruise product…yet). Other lines such as Crystal, Cunard, Azamara, etc. all mix suite and non-suite accommodations, but again focus on the majority of the suites being of similar size.

Now,  the good news (and it is not all good news – you can jump down to the standard suites for the bad news):  The eighty five (85) Upper Level suites include the Regent, Master, Grand, Explorer, Seven Seas and Penthouse Suites.  Short version:  The top suites are very nice, but other than the Regent Suite do not seem to provide anything that isn’t available already on Seabourn or Silversea.  (I leave to you whether you feel the interior design is to your liking.)

Taking a look at them:

The headline grabber over the past month is the Regent Suite supposedly going at a rate $5,000 per person per night.  (Before getting to the suite, this pricing gimmick is exactly the same gimmick many hotels from Las Vegas to New York use to grab headlines.  Sure there will be a few people that will pony up that kind of money, but for the most part there will be deals – probably unpublished and undisclosed.  So just moderate your expectations, but you are allowed to go, “Wow”.)

This suite of almost 3,000 square feet with almost 1,000 square feet of balcony is impressive, but to be honest, for the cruise industry it is pretty much irrelevant as far as income and profit goes, but from a marketing standpoint it may well payoff big time by drawing in star power and those that just want to near such a thing.  (That surely takes this away from a travel experience and raises, yet again, the question of some:  “Is cruising travel?”)

The Master Suites are a two bedroom/2.5 bathroom affairs on Decks Seven and Eight approximately 1,100 square feet in size with balconies ranging in size up to 1,000 square feet…with access to it from both bedrooms and the living room.

The Grand and Explorer Suites are apparently quite similar and have living areas and two full baths (really one large bathroom and one 3/4 bath as it has a shower and is much smaller).  Ranging from 854-920 square feet plus a 732-916 square foot balcony, these are also spacious suites thought, to me the layout seems a bit awkward…with the view out to the sea basically being ignored as the dining and living room furnishings are focused on walls while also blocking the doors out. 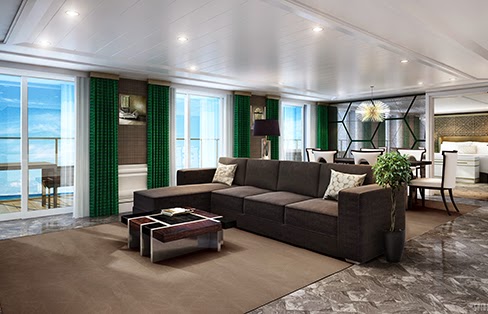 The best way to describe the Seven Seas Suites are essentially shrunken down Grand Suites with one bedroom and either one or 1.5 bathrooms at 577-655 square feet with 166 to 263 square foot balconies.

Now, as we move  down into the range of the most regularly booked suites I become more critical…because this is where the real business is had and what is of greater concern to the vast majority of my readers.  And this is where I am looking for “The Most Luxurious” anything to pop out at me in these remaining 290 suites.

To be honest, While I am craving it…I just ain’t seein’ it!

One of the things that look at are amenities and I have to look past the forever driving me nuts “Free!  Free! Free!” claims of Regent Seven Seas because folks you are paying (and in some cases paying dearly) for those not-actually-free amenities.  When I see things, on a 2016 delivery noting iPhone docking stations I have to wonder, “Hasn’t the word got out that worldwide Apple’s share of the market is now far less than 50%?” and that the allegedly free WiFi is limited to between 200 and 500 minutes, L’Occitane amenities are nice, but hardly “the most luxurious” , I am not really seeing the most luxurious of, frankly, anything.

I am seeing the same thing in the suites that I have seen for the past few years and some design decisions that are, honestly, highly questionable and most certainly not innovative.

For example, I am not in love with the design of the Penthouse Suite as there is no private bedroom with 450 square feet of space and there is a sort of dead space with a small table and two chairs up against a hallway wall (I assume for in suite dining), though the balcony area does impress much more.

The Concierge and Superior Suites, at 335 square feet, again, are nothing special…and while they do take a bit of change by positioning the bed so it faces out to the balcony, there is no design element that makes the room wow your and, to be sure, it appears to be lacking some furnishings if you want to have another couple visit in your suite.  (I have been critical of the budget Viking River Cruises for cutting back on chairs in its staterooms, so to see this in “the most luxurious cruise ship” ever built is, honestly, shocking.)

By the way, the difference between the two is a stripping out of amenities such as ground transfers, a pre-cruise hotel night and some WiFi minutes…along with a smaller balcony (in most instances).  I am sure there are those that just want to know they are in a Concierge Suite.  (I note that even on Celebrity, I advise my clients to skip paying the premium because you can get the added amenities for far less by buying them separately.  So if the name doesn’t matter…)

And here is where I kind of go nuts.  I admit it.  I truly do not like being told salmon eggs are caviar.

The Deluxe Veranda Suites are a mere 253 square feet with balconies of 55 – 88 square feet.  To put these suites into perspective, Seabourn had just jettisoned the Seabourn Pride, Spirit and Legend, which had a 1988 design (yes almost 30 years old) that offered 277 square feet of space.  These “most luxurious suites” offer you a single sink located within a tiny vanity and no bathtub. This actually makes them only a few square feet larger than a Crystal Cruises Stateroom with Veranda…which does give you twin sinks and a bathtub.

Now, it clearly is not fair to base the determination of if the Regent Seven Seas Explorer is the most luxurious cruise ship ever built on the fact that the vast majority of the suites are average to not actually suites or that the amenities seem antiquated (touting iPhone docks when Android and Windows grow in comparison) or less than luxurious (L’Occitane rather than Molton Brown or Ferragamo).

To be sure there is more that Regent Seven Seas will let us know about this new ship, but I caution you:  Unless you are purchasing the largest suites on this ship, you will be treated as a second class citizen.  If you read the amenities for them (such as guaranteed reservations in the specialty restaurants), you need to know that means you are placed behind them.  If that is fine with you (i.e. They paid for the privilege so it is fine) then there is no problem.

However, if you are someone that can afford the more expensive suites, but prefer to spend you money elsewhere are you also willing to be treated as inferior?

What about those of you expecting “the most luxurious” and then find out you are not entitled to it?

Would you like more information or to book a cruise on the Regent Explorer or any other cruise ship?  Call Goldring Travel at (877) 2GO-LUXURY or email me at eric@goldringtravel.com