Ritz-Carlton Yacht Collection: What is Really Behind the “Deal” to Build Two More Ships?

The Ritz-Carlton Yacht Collection and its efforts to design, build, and actually complete – no less successfully operate – a single cruise ship has been nothing short of a total debacle.  Between its rotating door of executives – most with no cruise or shipbuilding experience – to choosing a shipyard that was underqualified and underfunded, so far there has been a 2.5-year delay. (I do give a bit of a pass due to the pandemic, but that is not the primary or even secondary disease that has infected this venture.)

Remembering that I was integrally involved in the superyacht industry for decades and managed a shipyard in Australia for a few years, I have a bit of a different perspective on the recent “good news”.  Simply put: There appears to be a lot of serious issues covered in gloss and optimism…just like I said when Genting purchased the German shipyards in 2015…and those issues do not bode well for the future of the Ritz-Carlton Yacht Collection.

RCYC found itself with the original shipyard, Barreras, becoming insolvent, having to secure the ship and then move it to another shipyard to be – kinda sorta – completed.  Why do I say that? Read on! 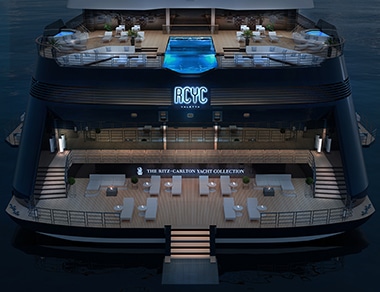 Before I discuss the announcement of the new ships, let’s take a short step back to March 1, 2022…only two weeks ago.  Ritz-Carlton Yacht Collection announced that “a third-party engineering firm” performed an “audit” of the 298 guest Evrima (the name, too, is not the original one) which resulted in a “new completion timetable” and an August 2022 completion date (long past its original “late 2019” pre-pandemic date announced in 2017).

There is a lot to unpack there!  Bringing in a third party means that there is a serious conflict and/or loss of trust between RCYC and the shipyard or the very ship itself. Because it is just too complicated and, frankly, not that important for this analysis, just understand that there have been lots of people overseeing this project and then leaving (for a variety of reasons), which in turn created inconsistencies, voids in information, and, without question, quality control issues. 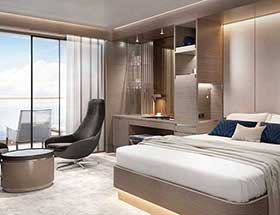 Taken on its own, and being optimistic, there are a couple of possibilities: The time to complete was too ambitious, and/or there were construction issues (ranging from incomplete work to errors to supply chain problems) or any combination. But – and it is a big “but” – the press release goes on to say that there were “somewhere between 500 and 600 workers” and that would “peak at 900”.  Soft numbers and a potential 40+% increase in workers leads to yet other concerns such as the project having been understaffed and/or there now being a huge rush to get the ship completed with various trades falling all over each other in the shipyard which, in turn, leads to errors, shortcuts and quality control issues.

RCYC pretty much admitted the shortage when its CEO, Dough Prothero was quoted stating supply chain and labor issues have caused “quite a bit of disruption”. But at the same time RCYC needs to stop bleeding funds and negative cash flows and get the ship operating!

So with RCYC pretty much admitting things have been chaotic at best, construction issues remain, and there being a plethora of other issues, we can now look at the newest “good news”: Chantiers de l’Atlantique, in France, is the “third party engineering firm” that audited Evrima.  While RCYC states that the ship will still be finished in the Spanish yard where it now lies, without saying it expressly, it seems clear that  Chantiers de l’Atlantique will be overseeing – or more – this final push to complete the ship.

However, there is no question that this small venture is not a profitable or terribly relevant on its own for Chantiers de l’Atlantique, so RCYC had to do something to sweeten the deal.  Or was it that the shipyard needed a deal?

And from this the announcement that RCYC will have it build two 456 guest “superyachts” called Ilma and Luminara to be delivered in 2024 and 2025. While there is a lot of behind-the-scenes information that isn’t known (such as who is financing this project – the company is mostly owned by the French government) and if it is somehow related to the European Commission (EU)’s investigation into it potentially being purchased by the shipbuilding behemoth Fincantieri, to me it raises more questions than answers.

Leaving aside whether those two new ships will ever be built or delivered in that time frame, there is another issue that seems to point to issues with Evrima. The most glaring point is that these two new ships will apparently have very little in common with Evrima, claiming they will literally be twice the size, have higher space-to-passenger ratios, higher staff-to-passenger ratio and will have five restaurants, six bars, a wine vault, a marina, and a spa. Why the huge change in philosophy?

Some of it is fairly simple: Bigger ships are more economical to operate because more guests mean more income while the cost to operate the ship (from reservations to guest services) is not linear, so per guest costs are much lower. It is a bit of “economies of scale”.  (By the way, I mentioned the financial impracticality of RCYC operating as a one ship entity long ago.)

And then there is the issue of who the heck designed these ships?  It is common practice for shipyards to spend time designing concept ships to start discussions with potential clients. What isn’t common is going from nothing to a pretty much designed ship in a few days or weeks. I am not sure what it means, but will try to find out.  I know there are going to be lots of contingencies! (Next month I, as a journalist, will be attending Seatrade Global 2022 in Miami, Florida the international conference where the cruise industry does business and this is on full display.)

So what do the new announcements mean that is good?  It means that, hopefully, there are now qualified eyes overseeing the Ritz-Carlton Yacht Collection’s new build program and, thus, at least the completion of Evrima.  What it doesn’t tell me is what the design errors and defects are, how they are being addressed or compensated for.

And, of course, as I have said so many times in various ways, “The software matters more than the hardware.”  Hopefully, Ritz-Carlton Yacht Collection is further along with its software: The staff and crew, the onboard experience, the delivery of the port experiences, etc.

We shall see.  Fingers crossed!