A couple of days ago I received an email from CNBC letting me know that they read this blog and thought I might find its upcoming show “Cruise Inc: Big Money on the High Seas” of interest, which begins airing on March 24, 2009 at 9:00 pm EDT. They also sent me a link to a preview of the show. While the clip tends to show the same thing that many of us have seen on other shows or on the ships, I am hopeful that more than how much food is prepared on NCL is discussed. 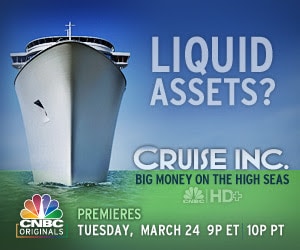 According to the just received press release: Correspondent Peter Greenberg and his crew investigate the strengths and weaknesses of the fastest growing segment of travel, as they spend seven days aboard the Norwegian Pearl, one of the newest ships in Norwegian Cruise Line’s fleet…Greenberg was granted extraordinary access above and below deck to document the inner workings of the ship and the business itself.

Greenberg investigates the intricate pricing structure of the cruise industry, starting with the most luxurious accommodations, which go for $26,000 a week, butler included. He explains the huge gap that exists between the baseline cabin fee and the actual cost of indulging all the ship has to offer. The report also explores common perceptions and misperceptions about safety and security at sea, and takes viewers behind the scenes as the crew of the Norwegian Pearl train for worst-case scenarios. CNBC gets a rare look at the Pearl’s state-of-the-art security operation, where officials use 1100 surveillance cameras to monitor the ship 24/7.

But, it got me thinking (as I do): The viewers of CNBC probably would be more interested in how things operate on a ture luxury cruise ship (as opposed to a mass market ship with some luxury suites) and how that business model is run, which is far different. In my initial email I wrote, in part:

“For the majority of my readers, Norwegian Cruise Lines would never be considered an option. The quality being provided just isn’t near acceptable. Food preparation, service and amenities are on a whole other level. For example, while Peter was watching the NCL galley pre-cook meals (lobster, etc.) well before dinner was being served, on Seabourn the meals are prepared ala minute.

And, as another example, for the guest it is not about consuming as many pre-cooked lobster tails as possible, but rather enjoying Lobster, Lobster, Lobster…which is an elegant plate of small portions of lobster presented three ways served with complimentary wines chosen to enhance that specific course. (And, of course, the wait-staff is wearing true formalwear, not t-shirts mocking them.)”

I had some additional preliminary telephone discussions today to see if either a follow-up or compare and contrast type program might be of interest. Hopefully I will be able to report back some progress in the coming weeks.

I did mention to him that CNBC did highlight one of my legal clients is Fischer Travel Enterprises. Fischer Travel is the travel agencies for the ultra-wealthy -and if you watch the video by clicking the link, you will know what “ultra-luxury” is about. BTW, don’t try to find the telephone number for Fischer Travel; as they say, “If you don’t know it, you wouldn’t use him.” If you want to engage in an OMG comparison, try to squeeze in our Five vs. Six Star Luxury discussion when talking about that kind of luxury.

So if you have any suggestions as to approaches for such I show I would love to hear them. And, even just putting them out there might just lead to some interesting discussions.