OK, with that preface, I have to admit that the angst of getting to this place was a big high – even for me.  So where to begin?

I guess the first issue is the what exactly is the beginning.  And what I mean by that is how many ways Covid-19 changed that beginning.  It was not enough that French Polynesia kept changing the requirements, making them more and more restrictive, but then having had a very mild bout with Covid-19 in November and then being exposed to someone who had an infection less than two weeks before my departure, put me back as if – well – I was in high school wondering if I would pass my test.  (And trust me, as a totally unmotivated high school kid focused only on basketball and girls, English tests were never a confidence builder!)

French Polynesia eventually set out some pretty rigid requirements. You had a choice of getting an antigen test and being tested again (at an intentionally high expense) upon arrival or getting a rapid test (rt-PCR) within 24 hours of your first flight.  Clearly, with high test demands that became a challenge, but with a bit of pre-planning to schedule it a week in advance I had my spot…but would I pass?  Heck I had less than 24 hour from my flight and was still wondering if I was going!  (I also scheduled a full PCR test, but that result still hasn’t come as they are not running 3-5 days or more!)  Well, Walgreen’s came through. I took my test on Friday at 9:30 AM and had my results at 10:42 AM: I’M GOING!

Oh, wait! When I uploaded my test results to United I received a message that my test was rejected. Oh Boy! Now what am supposed to do? I have less than 18 hours before my flight. After an hour on the phone, United said it was an error and just upload it again.  Whew!

And while that was going on, United changed my aircraft and my Premium Economy seat was gone (United changed the equipment so there were only two classes of service). Getting my bulkhead aisle seat in Economy Plus was another time burning, but I eventually got it (United computer issues).

With a 6:15 AM (ugh) flight from Reno to San Francisco followed by a four hour layover, I thought I might try the American Express Centurion Lounge. It was packed, loud, dirty and with virtually no seating left. So I headed over to the United Club in the International terminal. It was fantastic with almost nobody there, comfortable seating and some decent food selections.  I settled in with a Bloody Mary and finally really relaxed.

That is until I looked to see where my luggage was and all of a sudden my baggage tag number stopped being tracked and I had a new number. What???!!! Another “Goldring has his luggage lost” situation?  Fortunately, it was just that my first tag had been damaged so they issued another one. Whew!

Because the flight was fairly empty my seatmates moved and I had three seats plus the one across the aisle from me empty…with, as per usual, a great view of business class. LOL. It was an easy flight. Heck, for me 8.5 hours is a pretty short flight!  (Curiously, I could order whisky on my domestic United flights, but only beer or wine on this one.)

I arrived at the sort of rainy Tahiti airport with my ETIS, my vaccination cards, my re-PCR test plus the two forms given to me on the plane.  Being near the front of the plane definitely helped make what followed quick, easy, friendly and WAIT: I have to have both an Antigen and PCR test?! But everything from Tahiti said if you had an rt-PCR test you were good to go and if you only had an antigen test you were going to pay for a PCR test at an intentionally very high cost.

Well, this is where things changed again…and I think for the better.  Why would I be upset by this?  More testing is a good thing and, let’s face it, layers of testing make for a safe journey!

I do have to admit that initially I asked myself, “If Tahiti was going to do this, why did I have to test prior to my trip?”  And then it hit me: By making the testing seem onerous most everyone would get the rt-PCR test before arriving in Tahiti thereby reducing the chances for Covid to arrive with the flight. In other words, despite the initial stress, it actually overall reduces stress knowing that there was a significant reduction in possible positives screwing things up for the rest of us!

The effect is this:

Even with the extra testing and waiting, I was out of the airport in less than an hour after touchdown. Pretty sweet!

It was then about a 10 minute ride to the Intercontinental Tahiti.  There are places that just don’t need to change and this is one of them!  After checking and being shuttled to my room, I check out my King Balcony Room with Oceanview and freshened up. 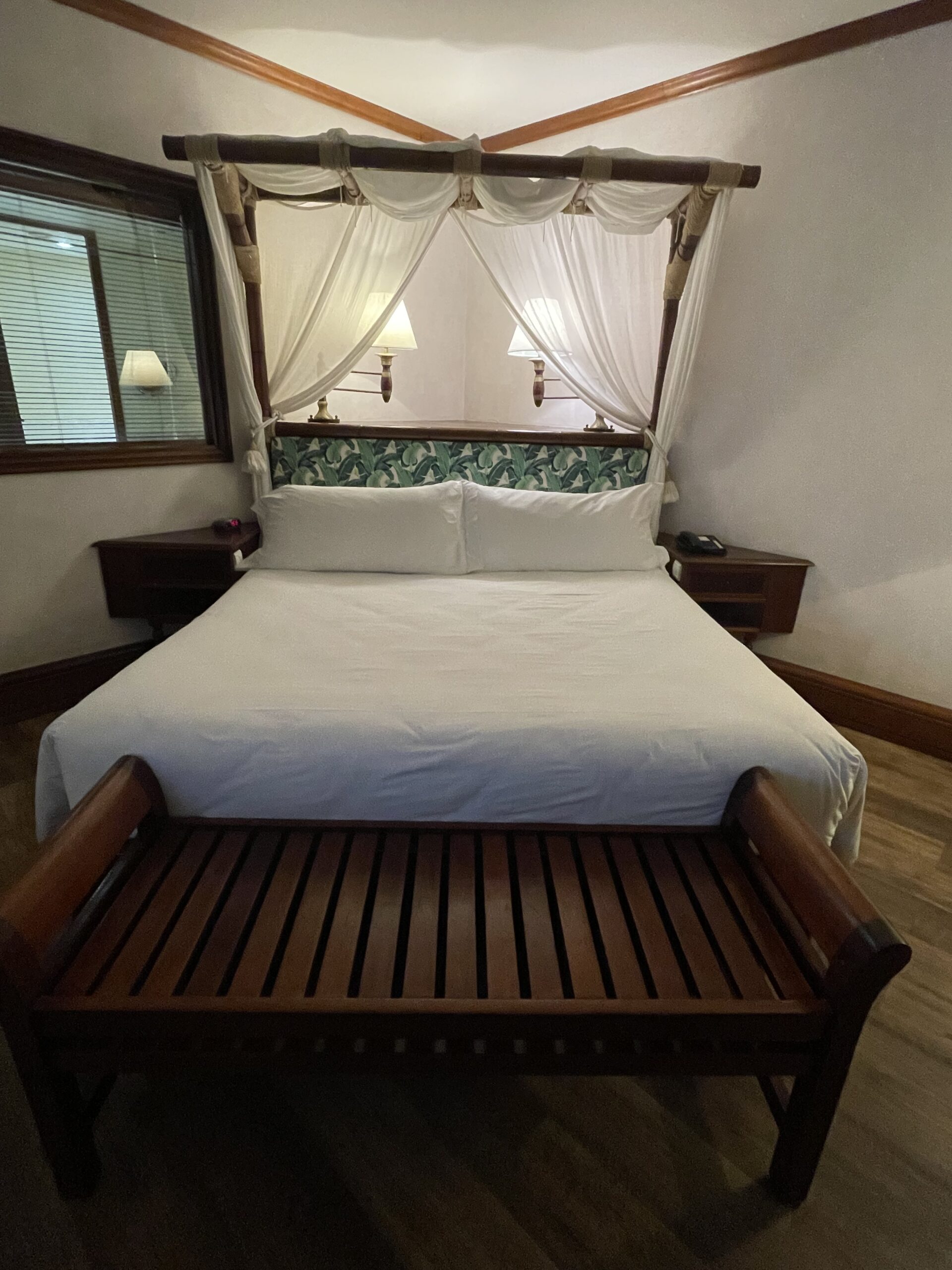 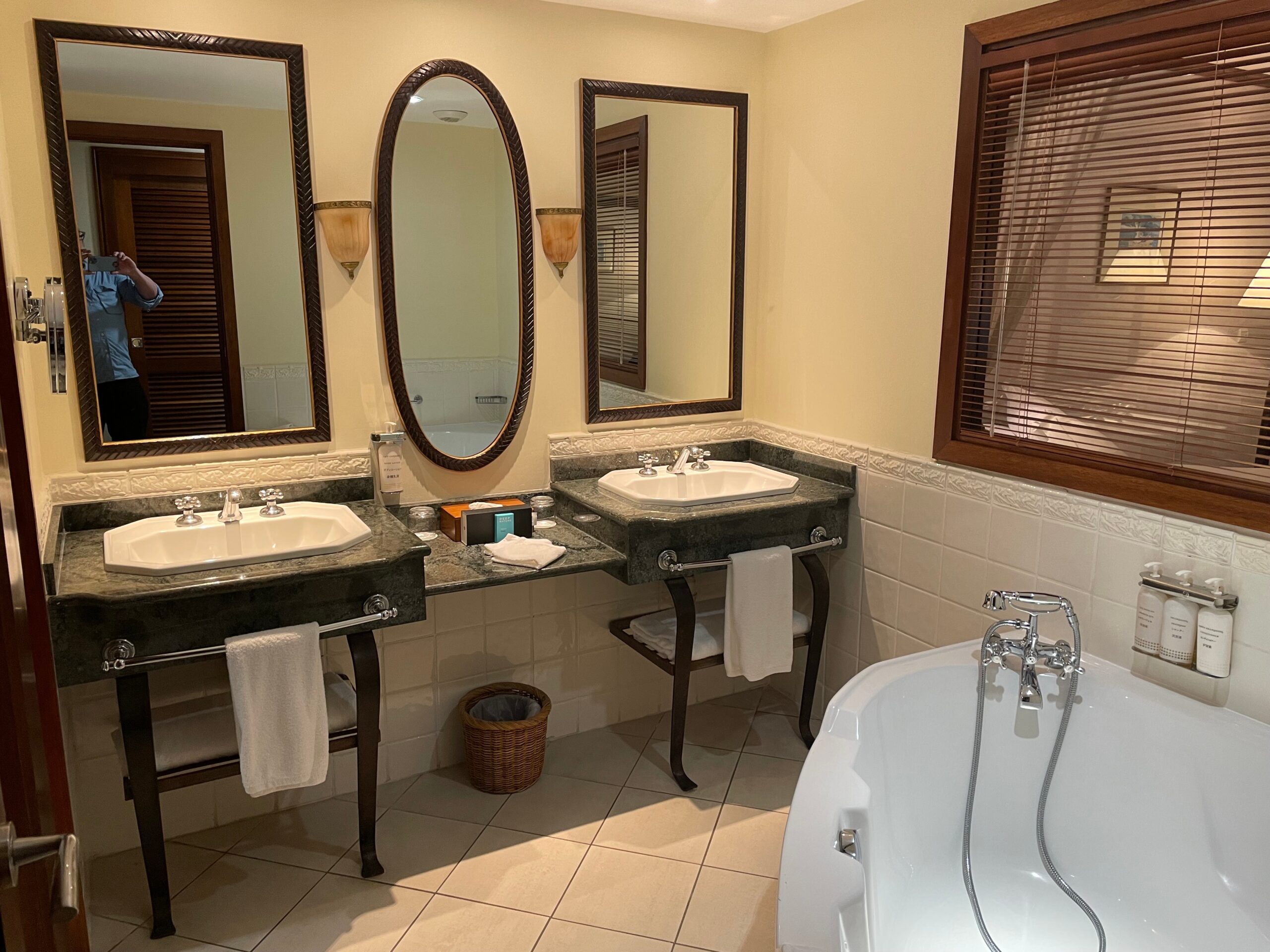 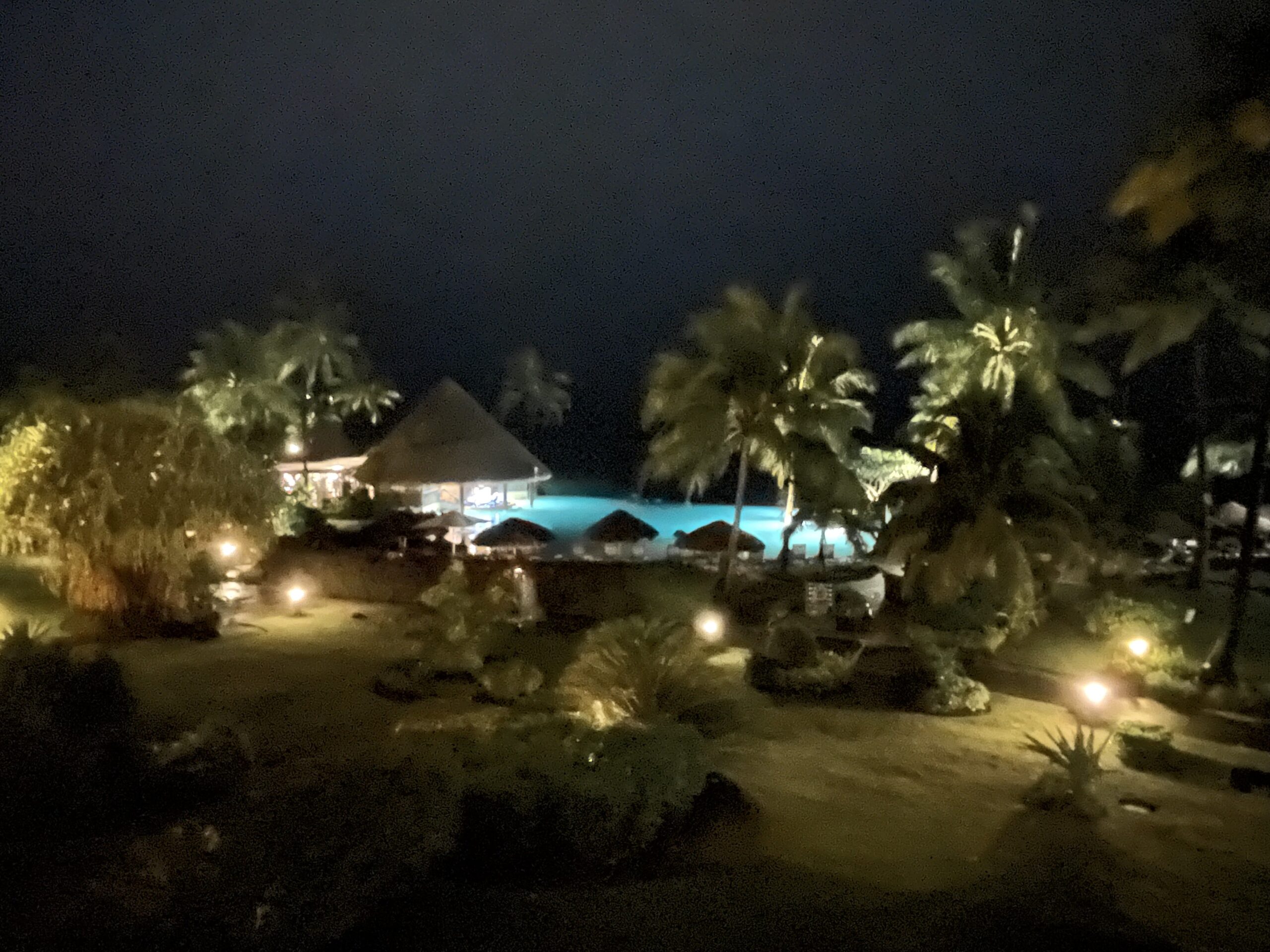 It was then time to meet up with one of my clients (who will be on the Windstar Star Breeze cruise with me) for dinner. Now, this is one thing that has changed and very much for the better. My culinary expectations were not high based on my last visit to this property back in about 2007. We were eventually given thin paper menus which had some local sounding dishes and a bunch of very American sounding fare, so my expectations hadn’t risen.

We then ordered a nice French Chablis and ordered our meal.  After a while, when our dishes arrived: WOW!  I am talking world-class cuisine served in a very lowkey casual tropical setting. I, of course, had to order two things:  Ceviche and Surgeon Fish (they don’t tell you the fish until presented BTW) with combawa (Kaffir Lime) and Lemongrass.

There is also a more formal restaurant, Lotus, but honestly, the cuisine was so good and since I’m not here for a romantic experience, I didn’t miss it on this trip.

It was then time for bed and then awakening to just an amazing view with Moorea in the distance. 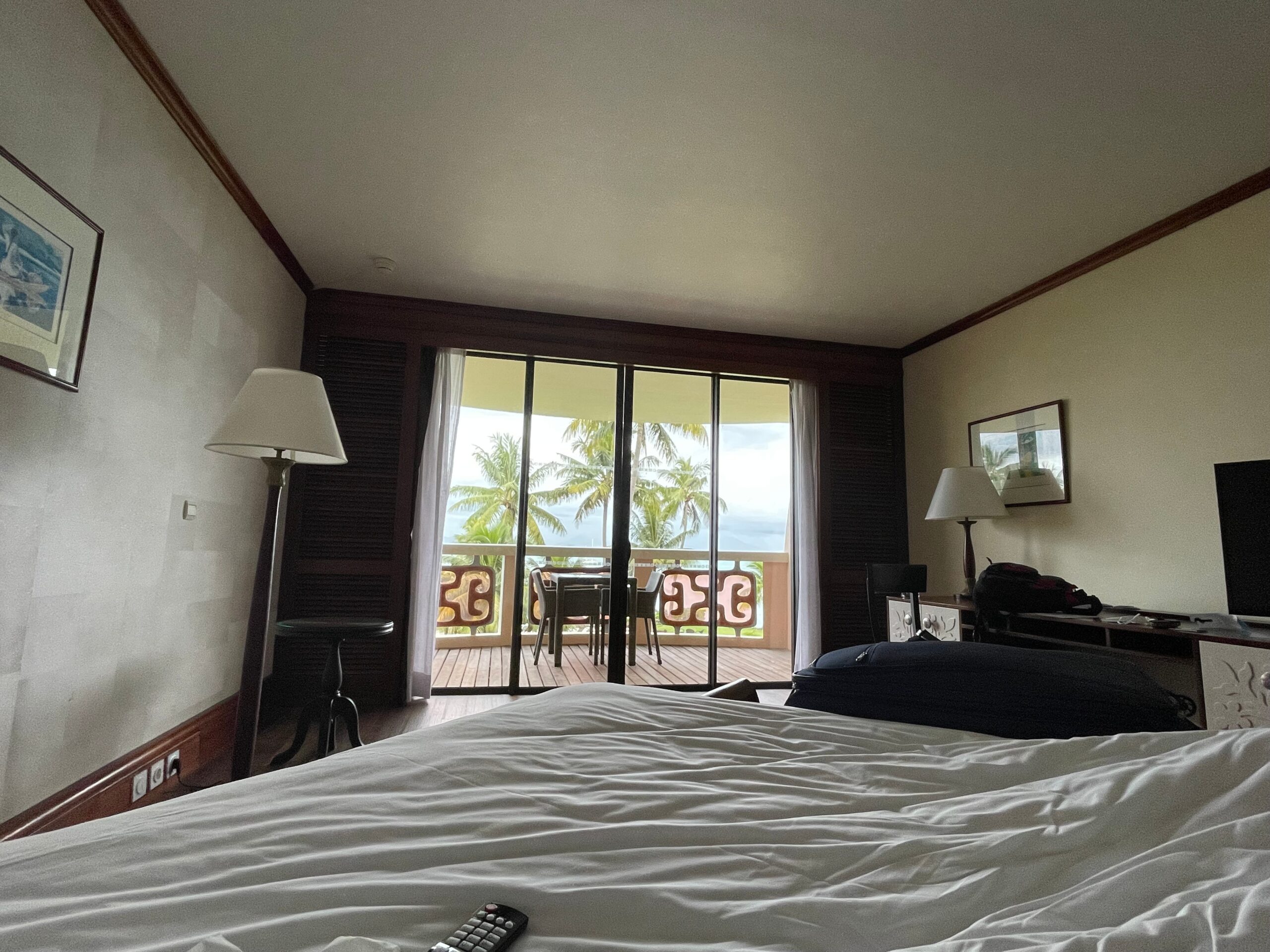 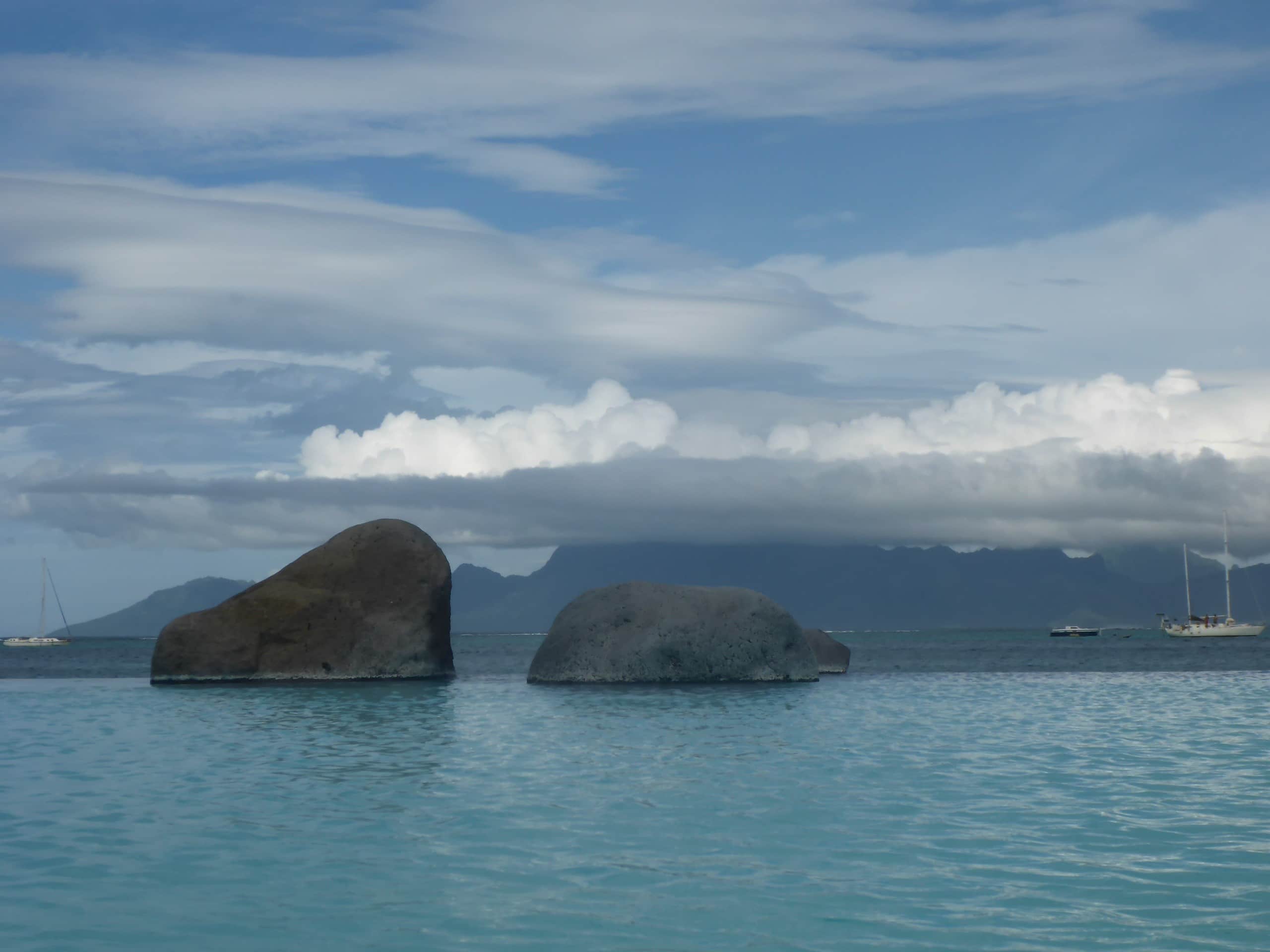 After working on this article and checking on emails, it was time to ‘er um use the facilities. So it was off to the freshwater pool with its white sand “beach” for a quick dip, a testing of the Swim-Up Bar and a walk around the property with the local music playing in the background as most of the guests filled the restaurant for a gorgeous breakfast buffet.  (I skipped breakfast!) 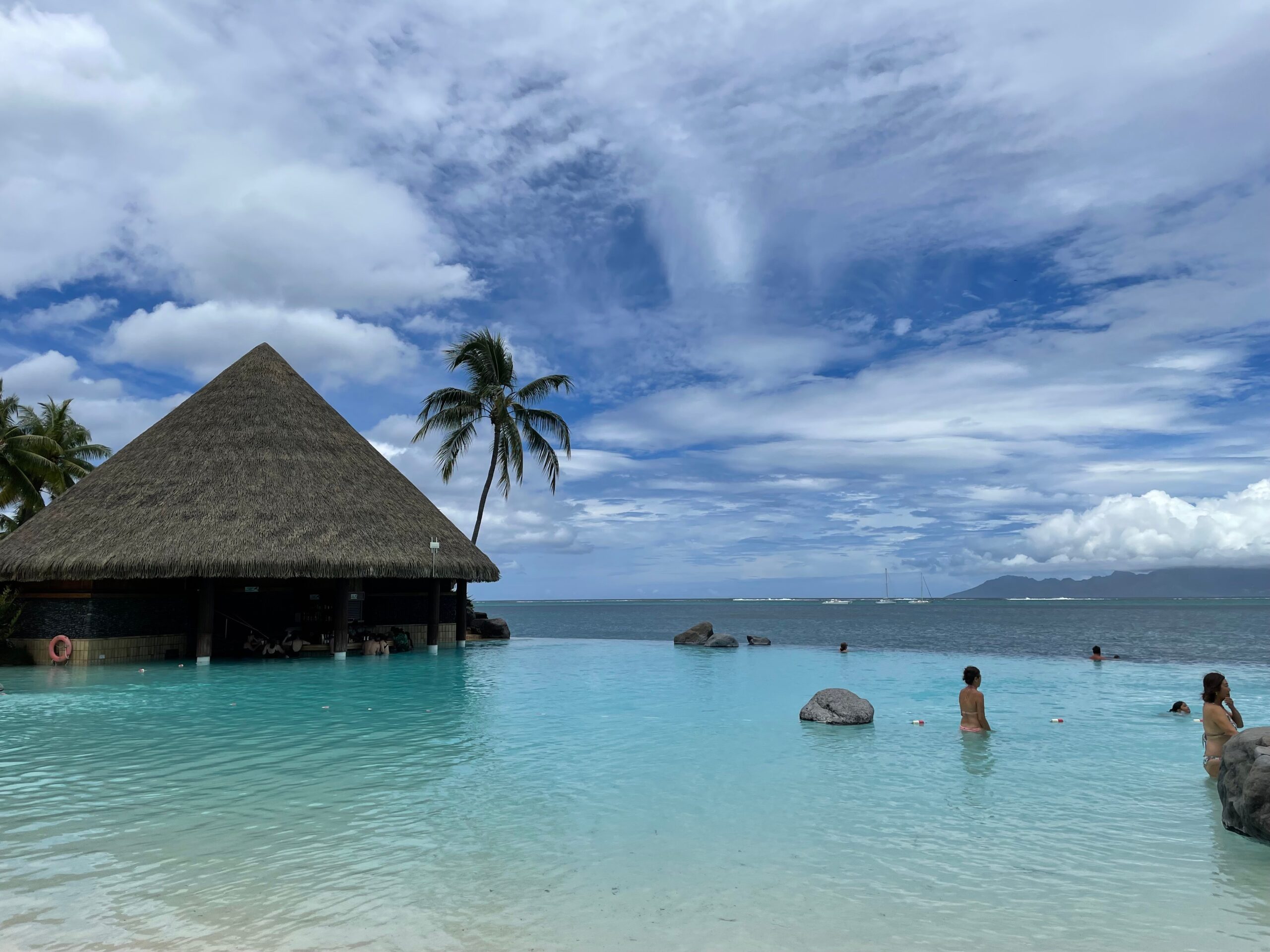 After a 12:00 PM late checkout, it was off to Windstar’s Star Breeze to start my 11 night French Polynesian journey!

A quick taxi ride to the ship brought us to an organized systematic check-in. As it seems the entire ship’s passenger list of about 160 guests converged at the same time there was about a 20 minute wait for us to start the process, but we did so sitting under cover with a nice breeze and social distanced.  When it began, there was a multi-step process which included another re-PCR test (Test No. 4 in less than 48 hours!). After the test you check-in and then are escorted to your suite. You have to stay in your suite until the rt-PRC test comes back.  We were told 2 hours, but alas, I think that is based on Island Time as it wound up being closer to 3.5 hours!

In my suite upon arrival was a plate with some sandwiches, cookies, and chocolate-covered strawberries. My luggage was delivered and I was able to unpack, get things organized, fixed a tour conflict with the Destination Desk…and then I called room service for a rum punch!  Being isolated in a suite on the Star Breeze isn’t exactly like one is doing “hard time”.  (I do have to admit that having been on the ship in June, missing the initial excitement of boarding and then immediately exploring the ship hasn’t affected me but probably has most of the other guests.)

While it isn’t exactly the “picture perfect” embarkation, it is a whole lot better than sitting in a room for an hour with a bunch of other folks waiting to find out if anyone there has just tested positive for Covid!

And, of course, relaxing in my French Balcony Suite isn’t exactly grounds to complain; especially since the rigorous testing since before I departed California can only make the Star Breeze one of the safest places in the world not to contract Covid!

Next up: Let the Cruise Begin!