One’s initial impression of Windstar Cruises is that everything is Nice and Easy.  There is a casual yet intuitive service that kind of sneaks up on you.  The genuine smiles are everywhere, but that intuitive service is hidden behind an incredibly easy going manner. Other luxury lines deliver the “product” but a sense of stress to do it perfectly while hiding that wonderful staff works hard to hide that stress exists. Windstar is, as I said, Nice and Easy…and it cradles you into relaxing and dropping any sense of pretense almost immediately.  Island (Windstar) Time awaits me…

My Windstar Polynesian Journey, after clearing isolation from my Windstar Star Breeze French Balcony suite, – with (1) a negative rt-PCR test less than 24 hours before I departed for this trip, (2) a negative Antigen test upon arrival in Tahiti, and (3) a negative rt-PCR test upon boarding the Star Breeze (but with the (4) rt-PCR test taken upon arrival still pending but now negative) – was now happening and it was time to “Get the Party Started!”.  (OK, I got it started while I was in isolation, ordering a rum punch to my suite and hanging out on my French balcony taking in the views.)

As it was late afternoon it was, well, Cocktail Hour, so I settled into one of the sofas on the port side of the Star Bar (formerly Seabourn’s Sky Bar) to await my dinner reservation at Candles, the steakhouse that the Veranda is converted into in the evenings. (Note:  Due to Covid and the intentionally limited number of guests onboard – 170 out of 312 – Candles is open every other night and the Star Gill is converted into Cuadro 44 for tapas on the alternate evenings…as Windstar is focusing on outdoor dining.)

But as I was sitting there I remembered I needed to sort out some of my tours. Yes, Eric is taking tours on this cruise. Shocking right?  Well, really not so much as the “tours” are more snorkeling, kayaking and beach days.  My game plan is – at least to start  – as follows:

The rest I will figure out…maybe. LOL

* Windstar needs to do a better job of reminding/reinforcing that there are included events, when they are or what they entail.  There is nothing in the suites or daily program (especially on Day 1) discussing when or what these two great events are.

After sorting that out, and having a late muster drill (we not only had to isolate until late afternoon, we had a 9:00 PM departure), it was time for dinner.  I am very happy to report that Windstar continues to excel in the culinary area.  As I have mentioned before, the cuisine is not as “fancy” as say Seabourn as it uses fewer elements when plating, but the quality of the ingredients and execution is definitely on par.

I started with a delicious bowl of New England Clam Chowder. It was not a heavy creamed one; leaning to the lighter side and with more of a fish chowder taste and texture. 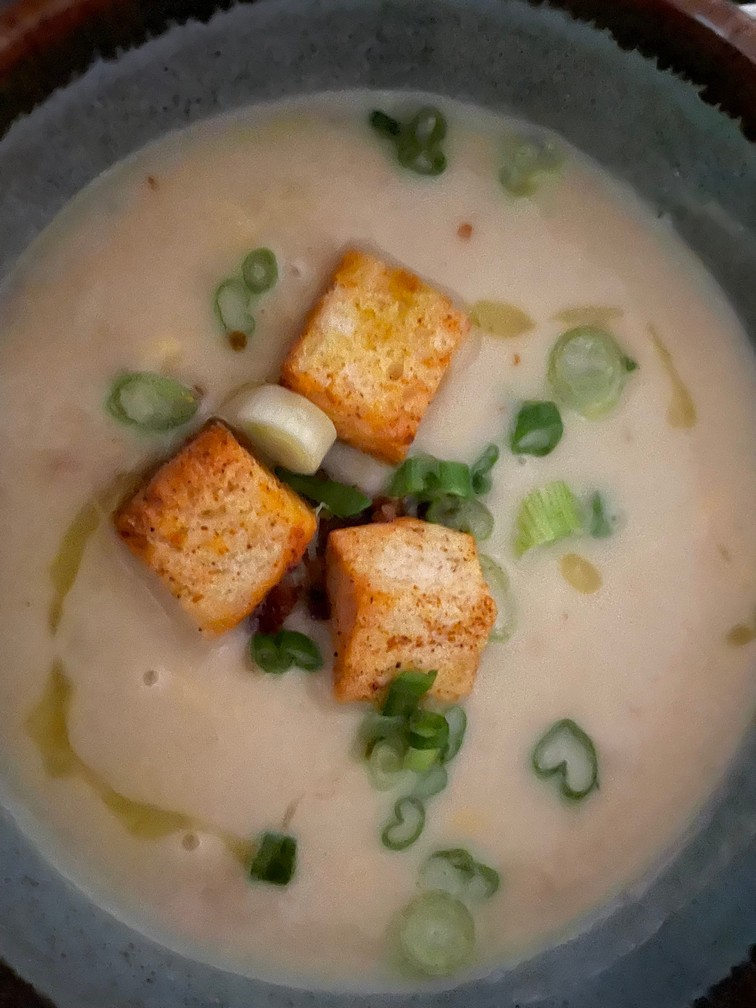 Next up was a perfect Veal Chop.  It comes with broccolini and asparagus, though you can add a number of other sides. I opted for a baked potato and onion rings. 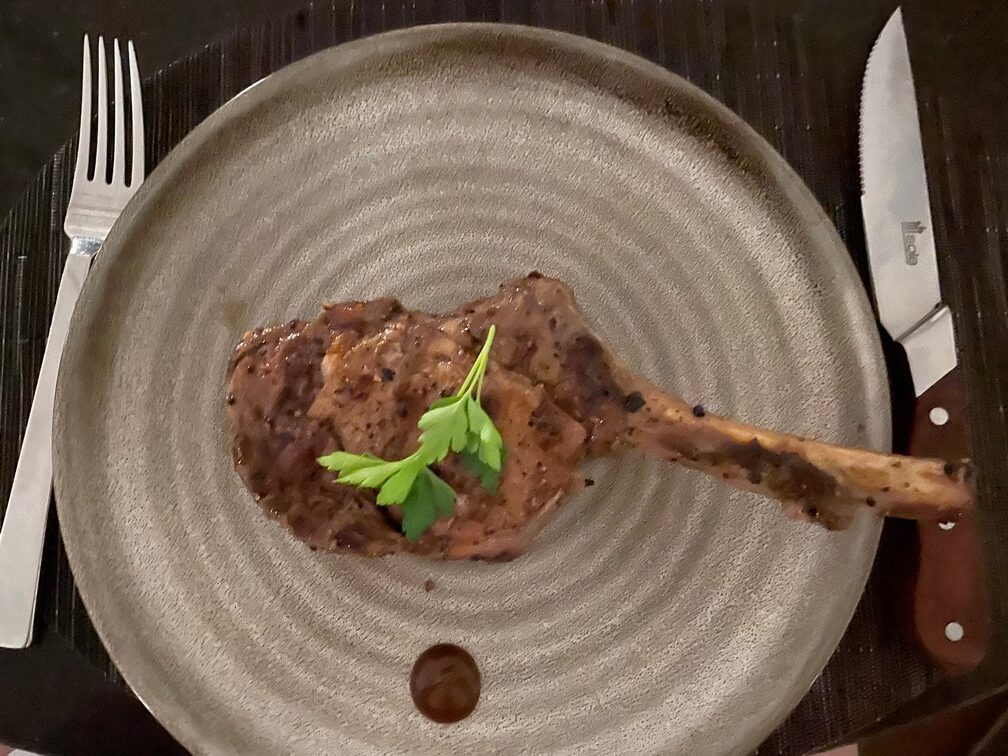 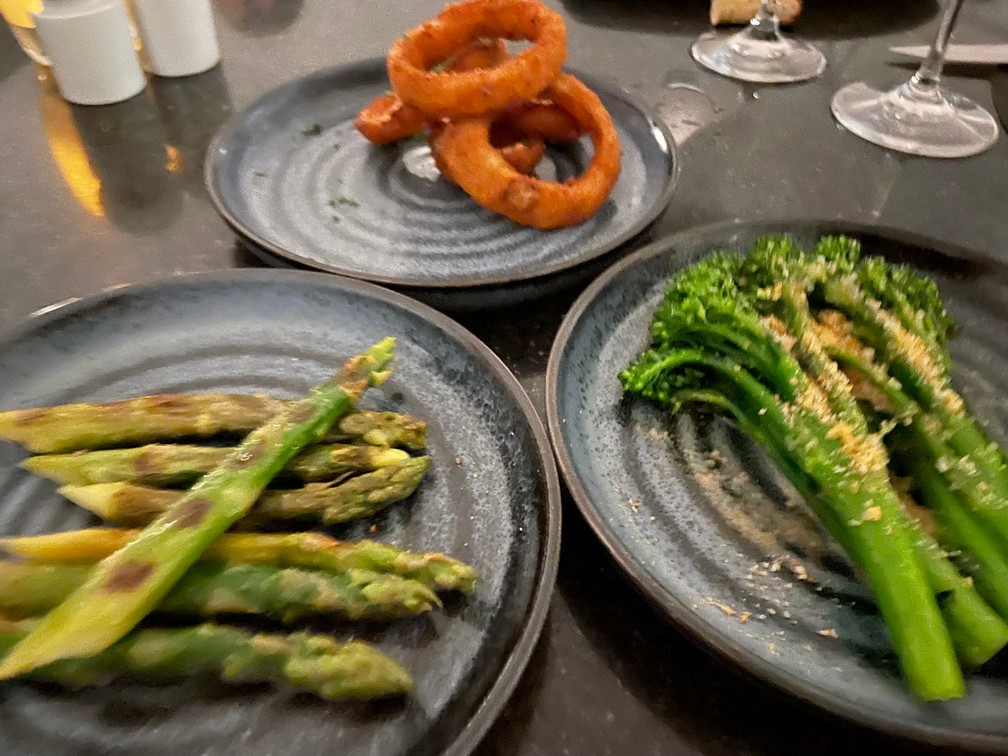 I don’t know why I did it, but I got a decadent chocolate dessert.  (Note to self: Day 1 is OK, but not anytime soon thereafter!) 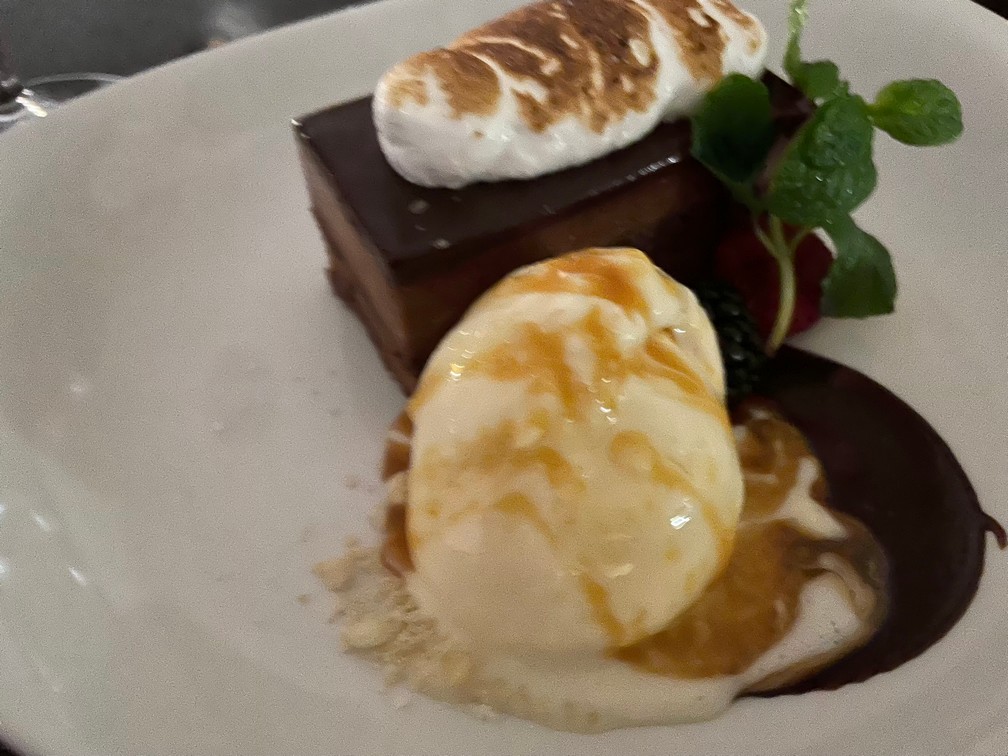 Rather than repeat myself or make this article overly long (I mean I know I won’t ever run out of words! LOL), here is my article from June 2021: Windstar Star Breeze Inaugural: Part Deux – IV. Fantastic Crew, Big Flavors & Fine Dining…Windstar Style – Goldring Travel

During dinner there was a brief, but very intense, downpour.  Fortunately, our table was set back so we sat comfortably while a few of the tables made a mad dash further under cover.  And then we were underway!

After dinner it was late and the day had been long, so it was off to bed. Sometime during the evening the seas picked up just enough so that wonderful rocking made sure I slept soundly. In fact so soundly that when I awoke to bright skies I thought, “Did I oversleep?” (oversleep what is a question I later realized was silly).  I looked at my phone: 6:02 AM and thought that couldn’t be correct, so I turned the TV on and, yup, 6:02.  And I was up. Ugh.

So I showered, put on one of my classic Jimmy Buffet shirts, and headed up to the Yacht Club for a coffee.  I then found my way to the Veranda for breakfast. So many of the staff remembered me (or were reminded of me!) and were right on service with what I enjoyed on my last Star Breeze cruise:  A nicely made Americano coffee, two mimosas, two poached eggs, and a bagel with smoked salmon. 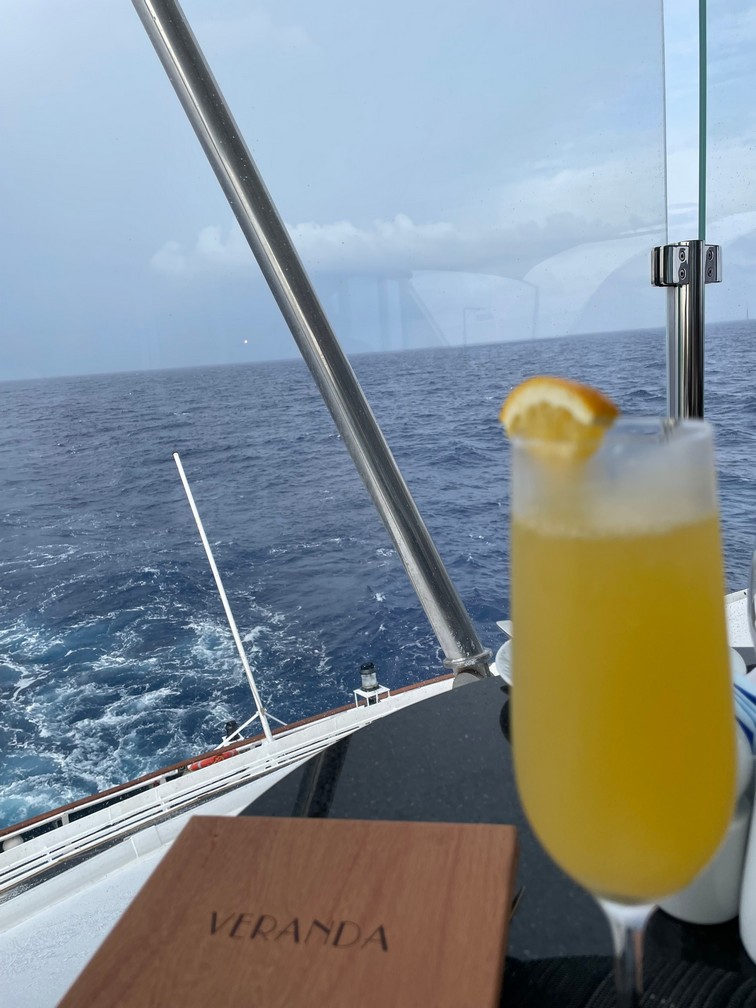 As I was walking out, Milton Ceklic, the Hotel Manager, greeted me. As we were catching up, Guenter Steinbrunner, Windstar’s Corporate Hotel General Manager came walking around the corner. I’ve known Gunter forever. We both go back to the Seabourn Days at Blue Lagoon in Miami, Florida!  Gunter didn’t know I was onboard and did a double-take when he saw me. It was fantastic catching up and reminiscing about the now gone Good Old Days at Seabourn were, the development of the Seabourn Odyssey (from plates to hardware), how so many have left and gone to Windstar and other cruise lines, and – of course – the foolishness of my being blacklisted. We kind of overwhelmed Milton, but I think he enjoyed our over-the-top enthusiasm.

After a bit of work (a crisis always arises as soon as I depart for a trip) and fighting to upload photos on slow internet (the best satellites aren’t exactly pointing to the middle of the Pacific Ocean), it was time for the midship whirlpool (as the one on the bow doesn’t operate when the ship is underway in seas).  As I sat there one of the servers came rushing up to me to see if I wanted a cocktail.  Yes. Yes I do!  I’ll have a caipirinha…OK, maybe two! 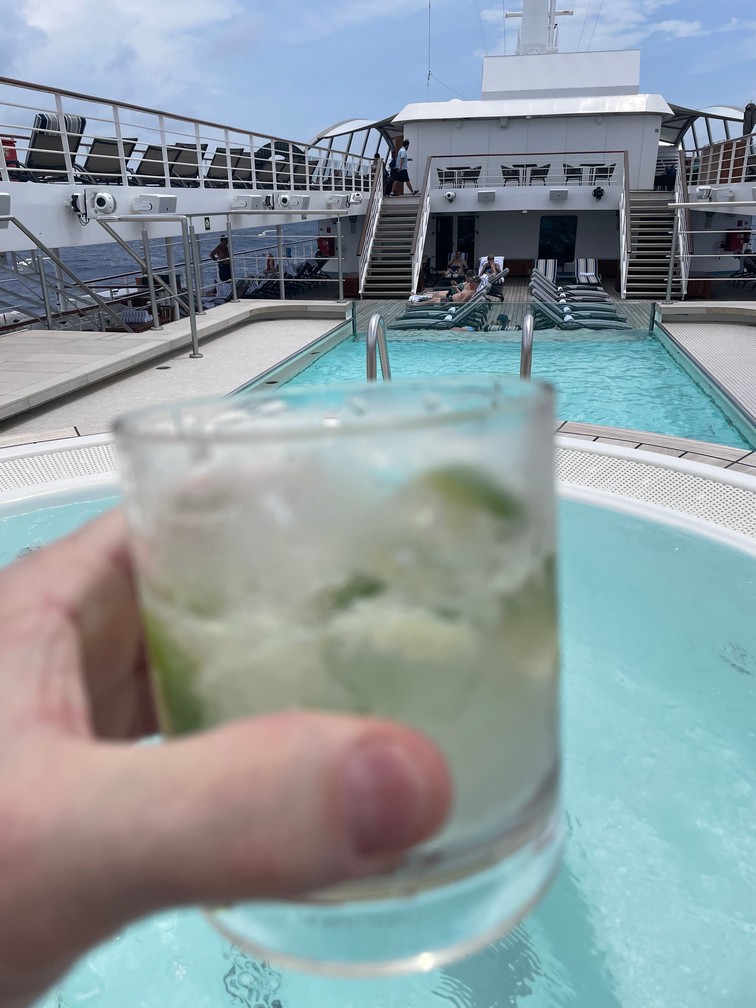 I then met up with one of my clients onboard – who has been a very longtime Seabourn guest – and all of a sudden Guenter appeared and another animated and joyous reunion was had.  It just makes me smile!

Now it was time for the important stuff:  Lunch at the Star Grill.  On the menu was Smoked Rum Glazed Rack of Pork and Mediterranean Chicken.  The smells coming from the Grill were amazing and made the half-hour until lunch seem to drag on, but it was so worth it. No thin slices for me. I’ll take a proper full rib’s worth, thank you very much! YUM! 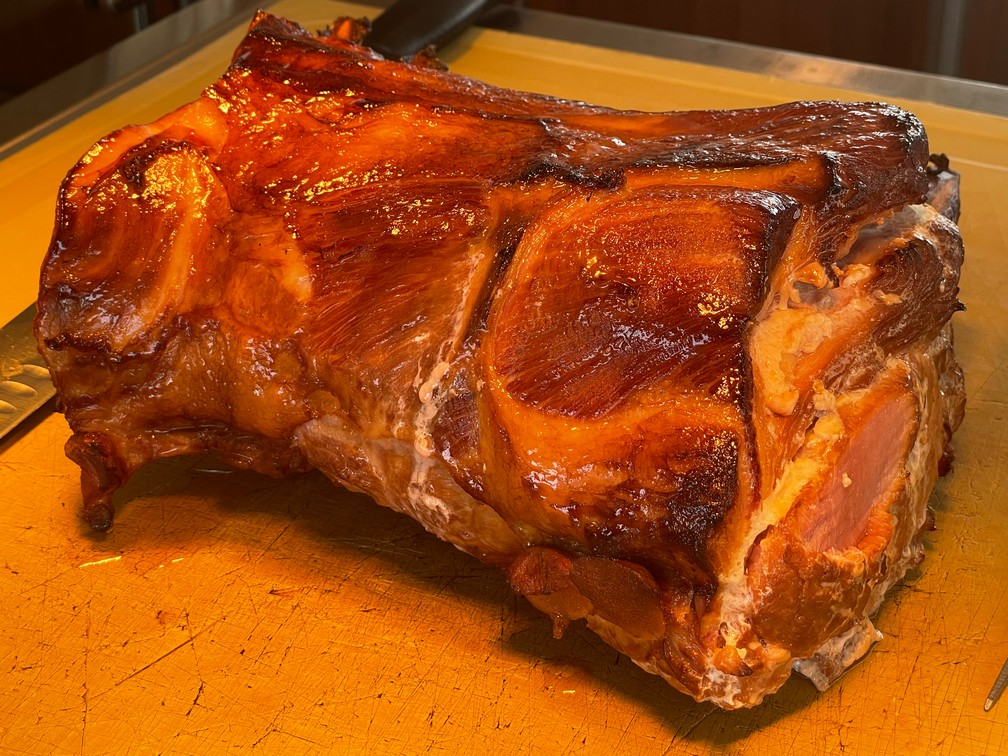 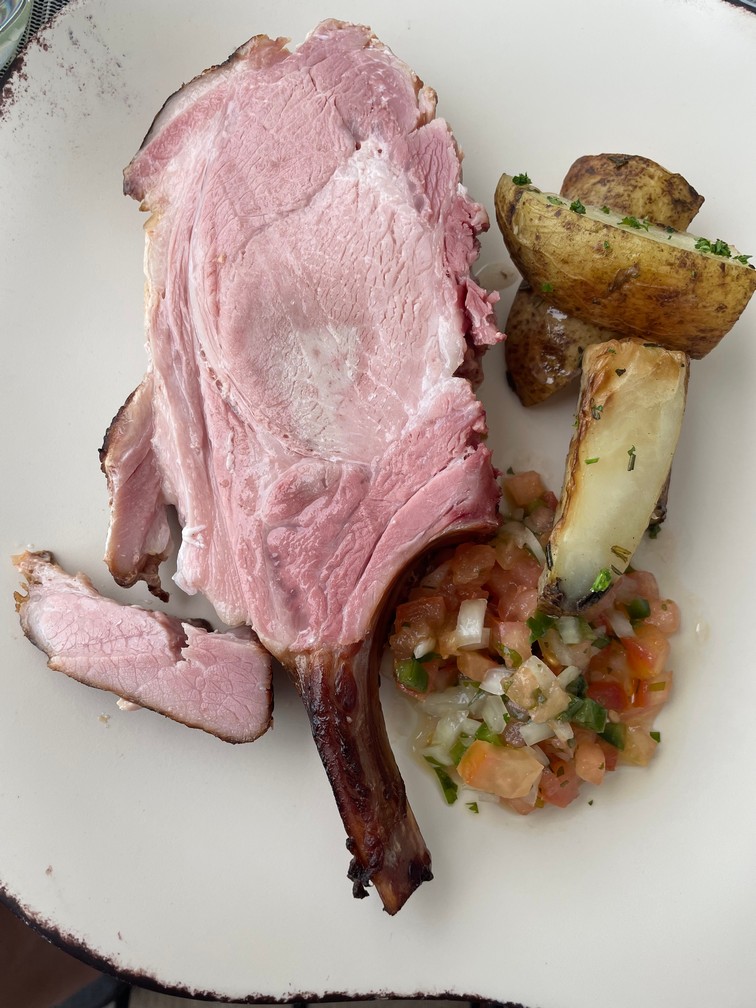 OK, I’ll try a bit of the chicken. 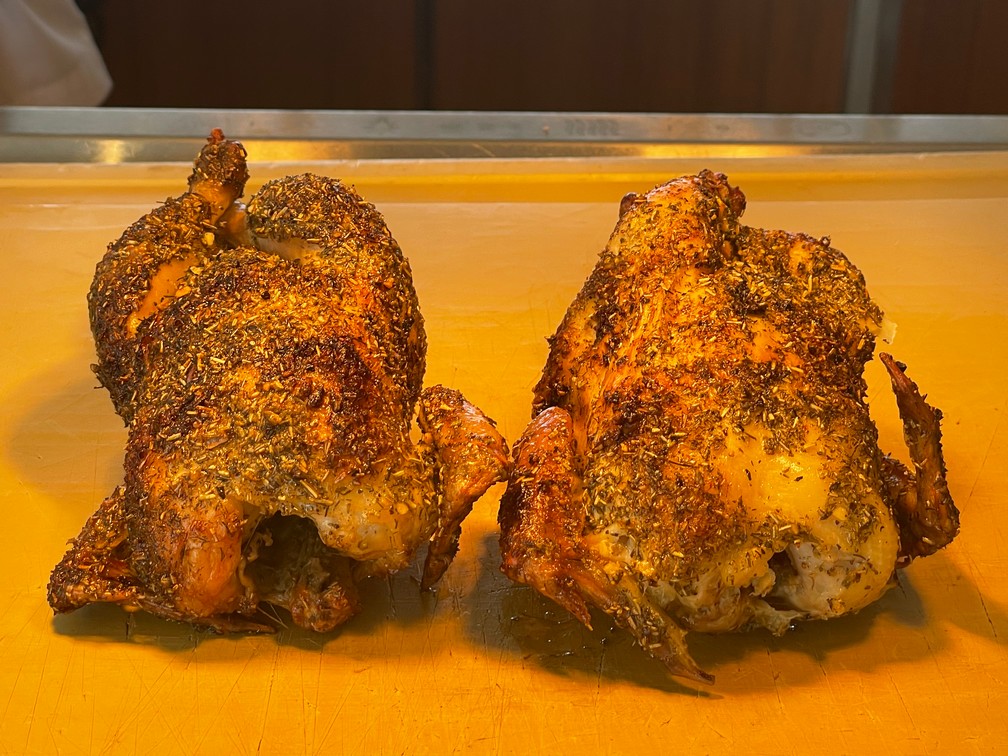 Windstar continues to have an excellent and very diverse salad bar, but salad and Rack of Pork just doesn’t work for me. LOL 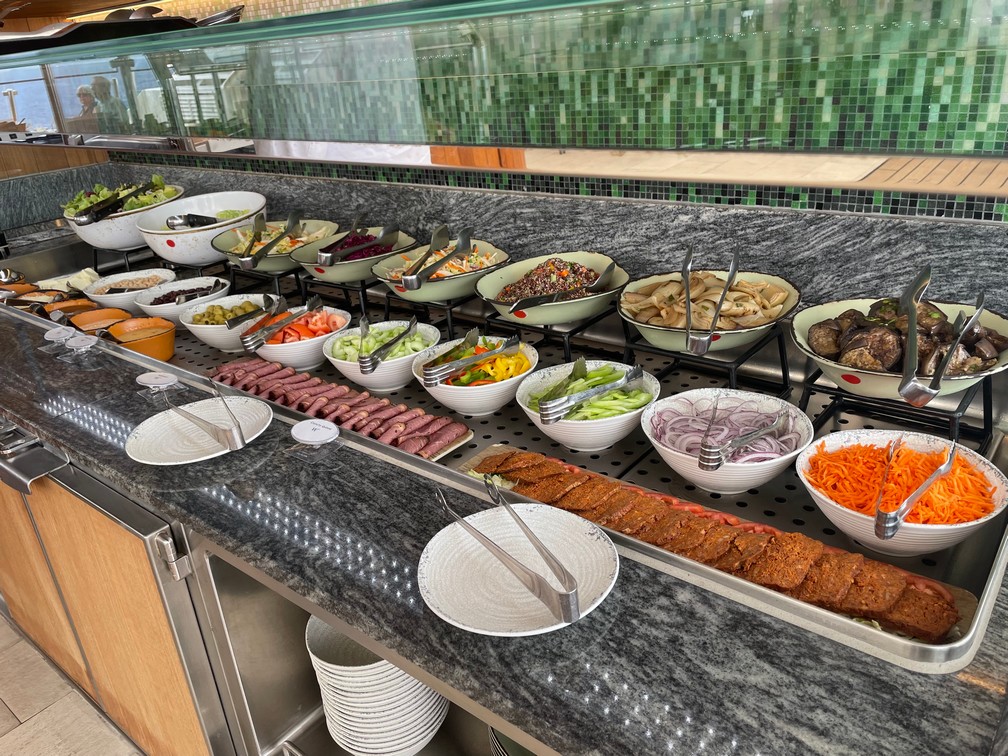 After lunch it was time for a bit more work, a bit of writing…and a massage! I have to make sure the quality of services on the ship are keeping up to the high standards I experienced on the Inaugural Sailing of the Star Breeze back in June, don’t I?  And, yes, it did!  Great massage.

Early evening brought on the Captain’s Reception on the Pool and Star Bar Decks – again keeping things outdoors.  Captain Ricardo was a reserved, yet charming as ever and the other officers continued their informality with class.  One curious thing is that the Port Talk followed the reception so rather than a long cocktail hour it was here and then gone.  Not a dealbreaker for me, but worthy of note.

Dinner was at Cuadro 44 al fresco. It was delivered as it is in its normal indoor venue, thankfully…and tastefully. Rather than overwhelm this article with each of the tapas and courses, I will refer you to my article from June 2021:  Windstar Star Breeze Inaugural: Part Deux – II. Getting There, First Impressions, The Suite and Caudro 44 – Goldring Travel

I do want to mention two things: (1) Order the Bacalao with Manila Clams.  (2) The Cheese Plate is fantastic.  Honestly it is of higher quality, more cheese is provided (not a single taste of it) and it is far better presented than you will find on Seabourn.

After this leisurely dinner it was bedtime as the next morning was snorkeling in Fakarava and my first chance to stretch my legs (other than by Sharon, the Windstar masseuse, who did some serious stretching of them!).  I had selected the Blue Lagoon for the morning and Pufuna (a deeper water drift snorkel) for the afternoon.

Windstar, again, limited the number of guests that could go on the excursion for safety reasons.  It was about a 45 minute run from the pier (after taking a tender to get there) with a stop at a small island filled with a variety of seabirds including two types of boobies.  We eventually wound up in shallow water to disembark the boat and arrive at the picturesque white sand beach of the Blue Lagoon. 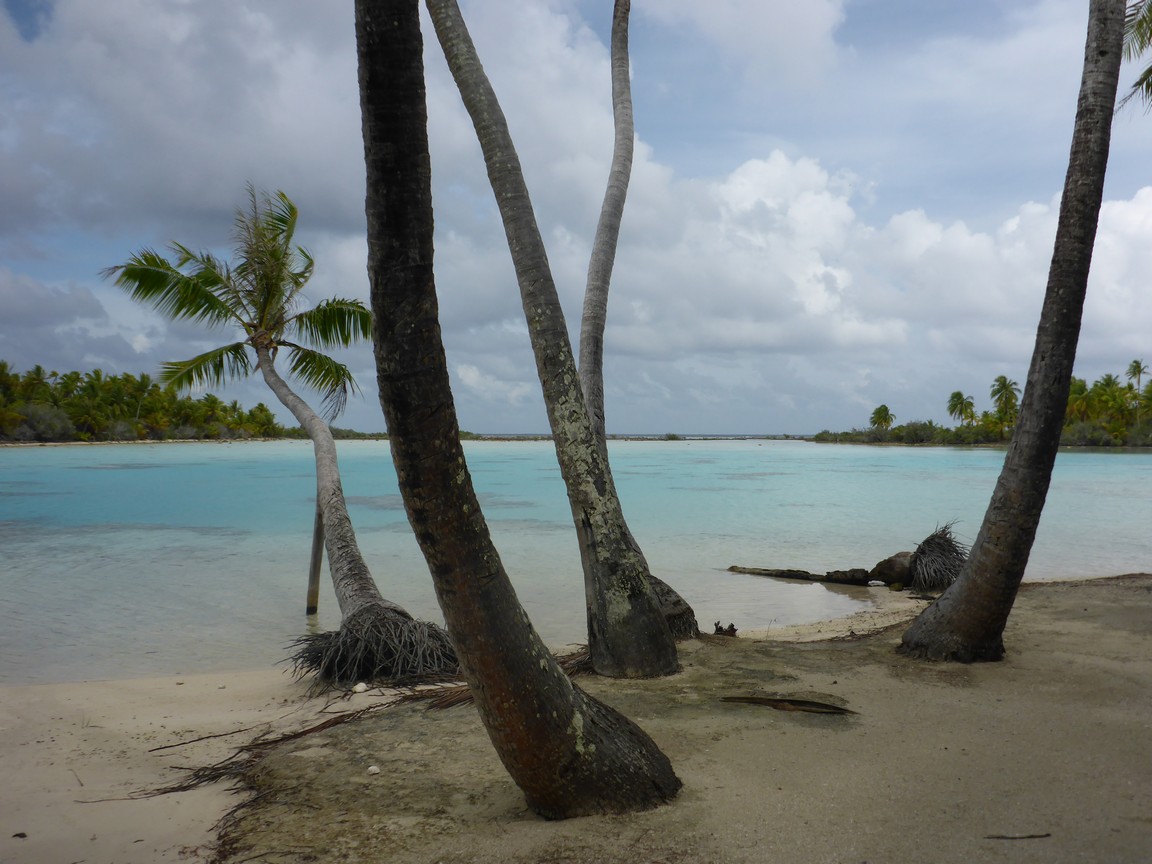 Unfortunately, due to ocean currents, French Polynesia is not a hotbed for snorkeling.  Also, with a bit of cloud cover and the poor weather of last week, the water was fairly cloudy.  Also, this lagoon is filling up so it has become quite shallow and much of the coral has died. However, there were plenty of colorful fish to enjoy in calm warm waters. 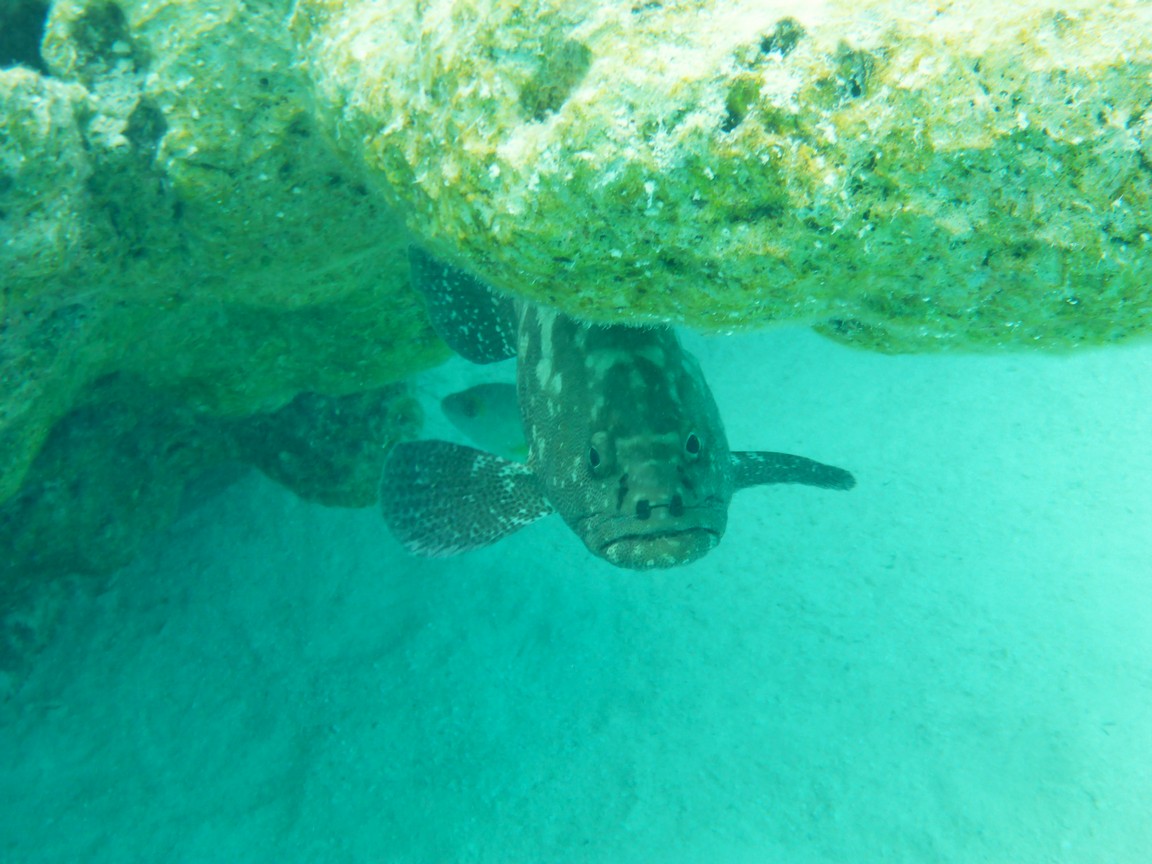 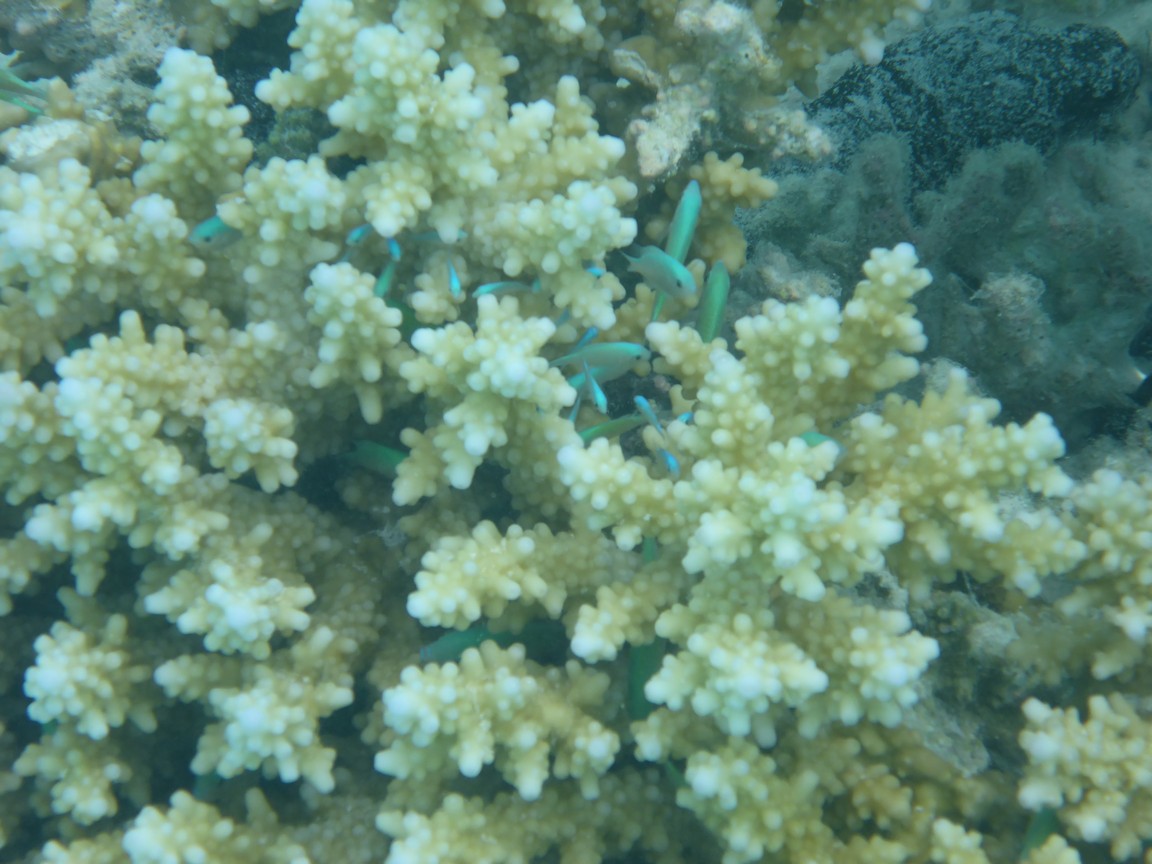 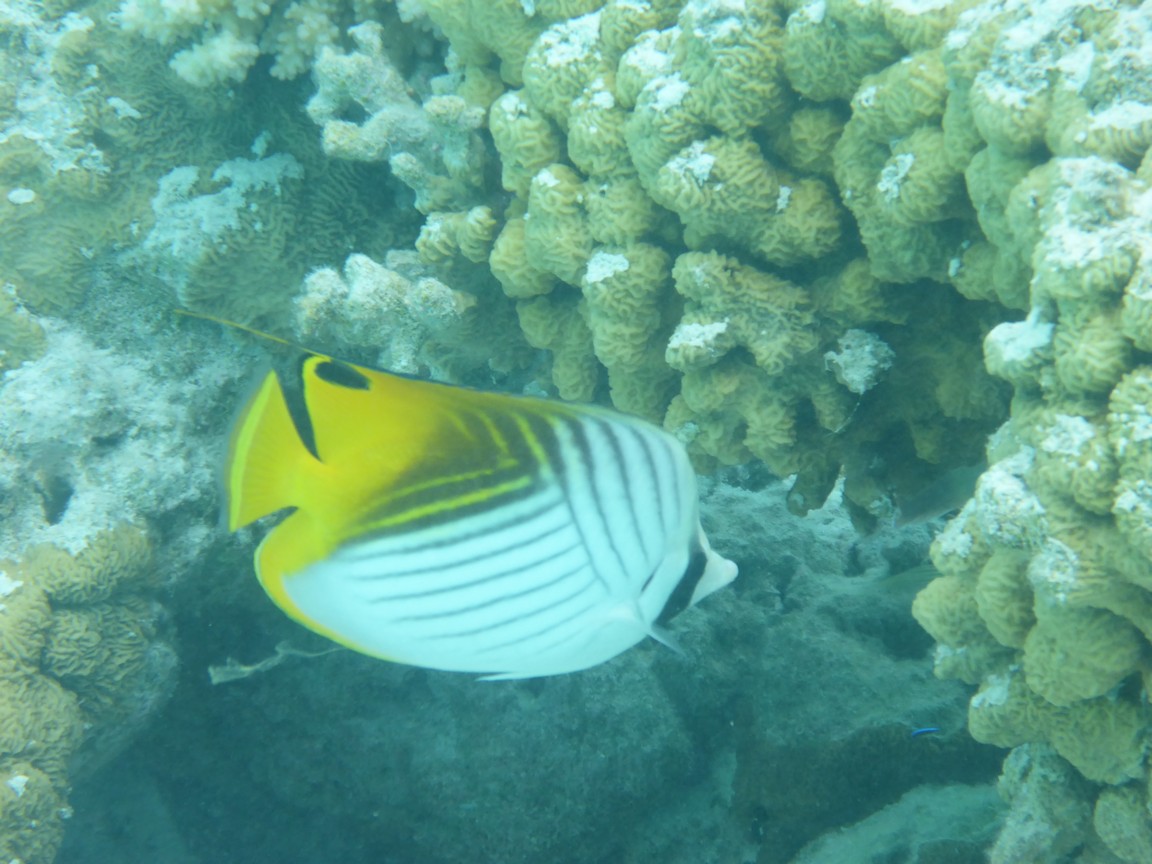 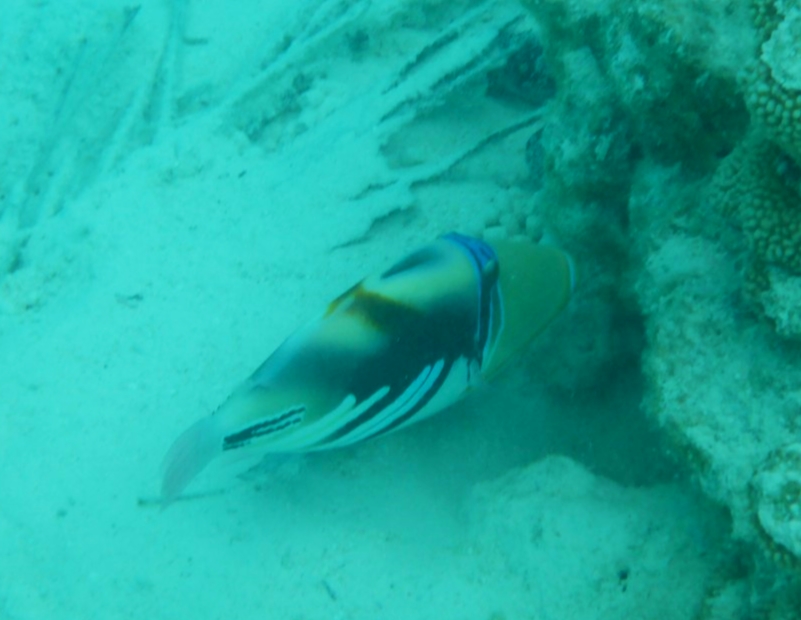 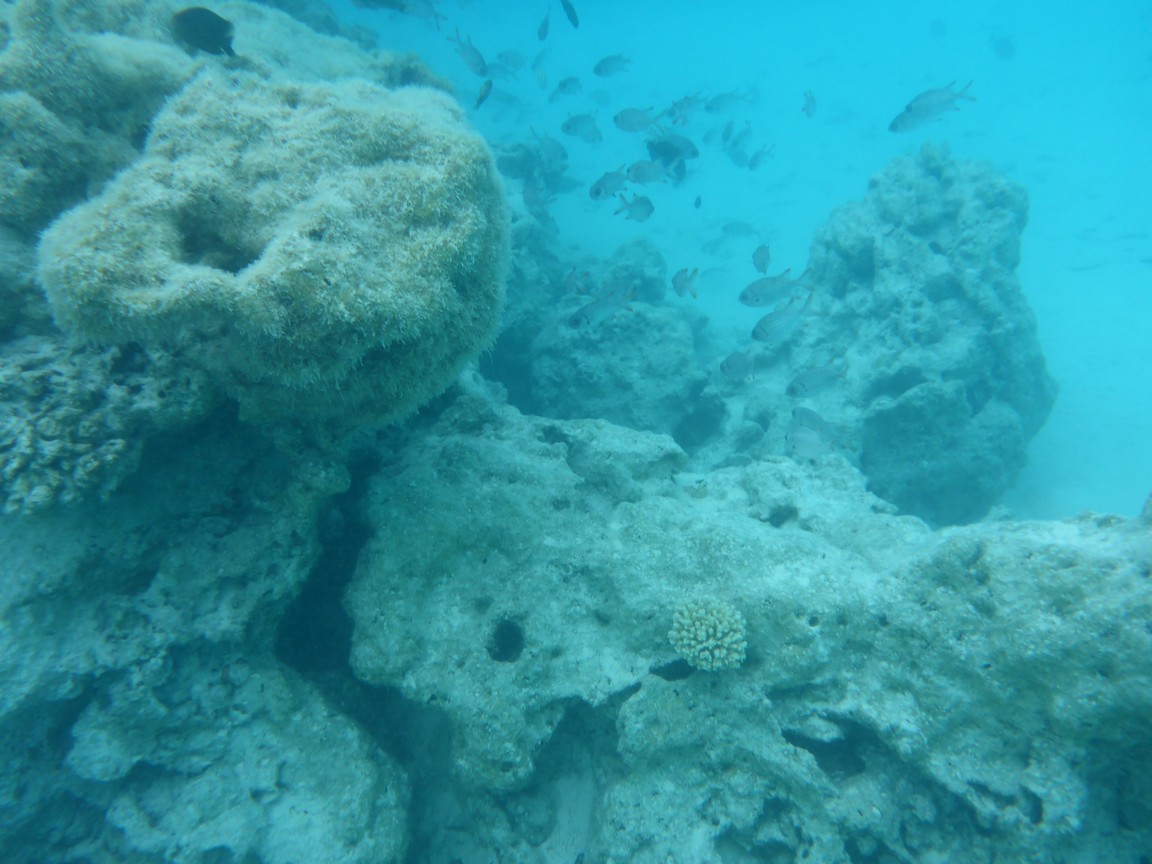 On the way back we stopped at Pufuna for some drift snorkeling…exactly what I had booked for the afternoon.  Again, with less than bright sun and cloudy water, it was nice but not worth doing again in the afternoon.  The solitary Black Tipped Reef Shark agreed! 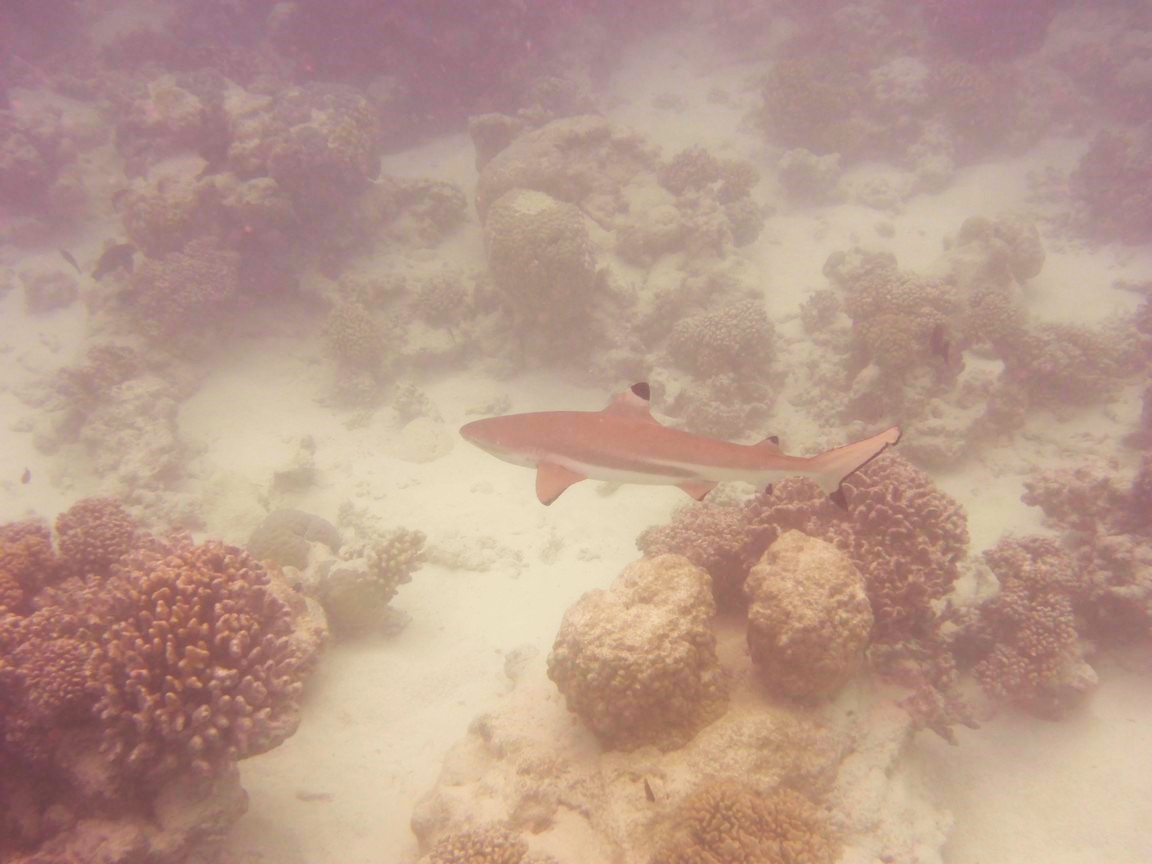 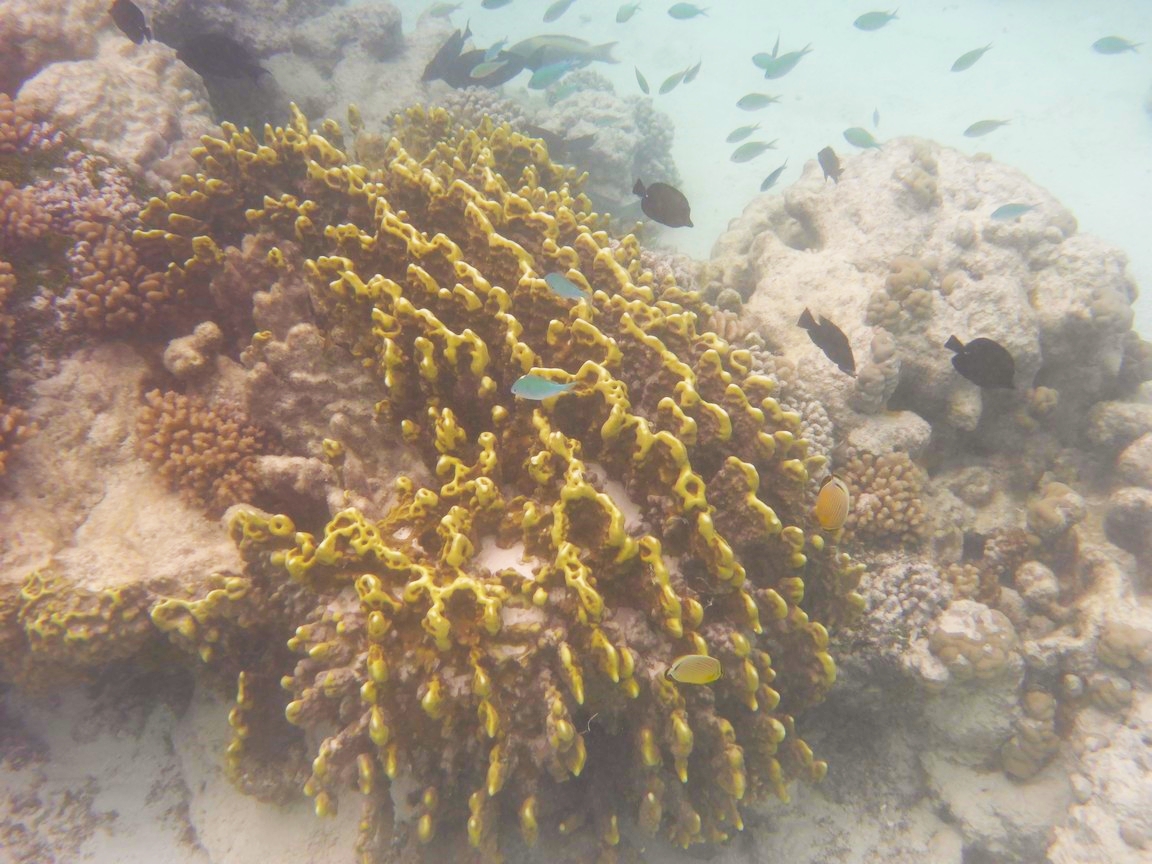 This tour is perfect for beginner snorkeling and enough to have kept me entertained for about 90 minutes. (Having snorkeled in Bonaire, The Great Barrier Reef and Galapagos, among other places, it really takes a lot for me to give praise to snorkeling, so don’t be disheartened if I am not overly enthusiastic.) 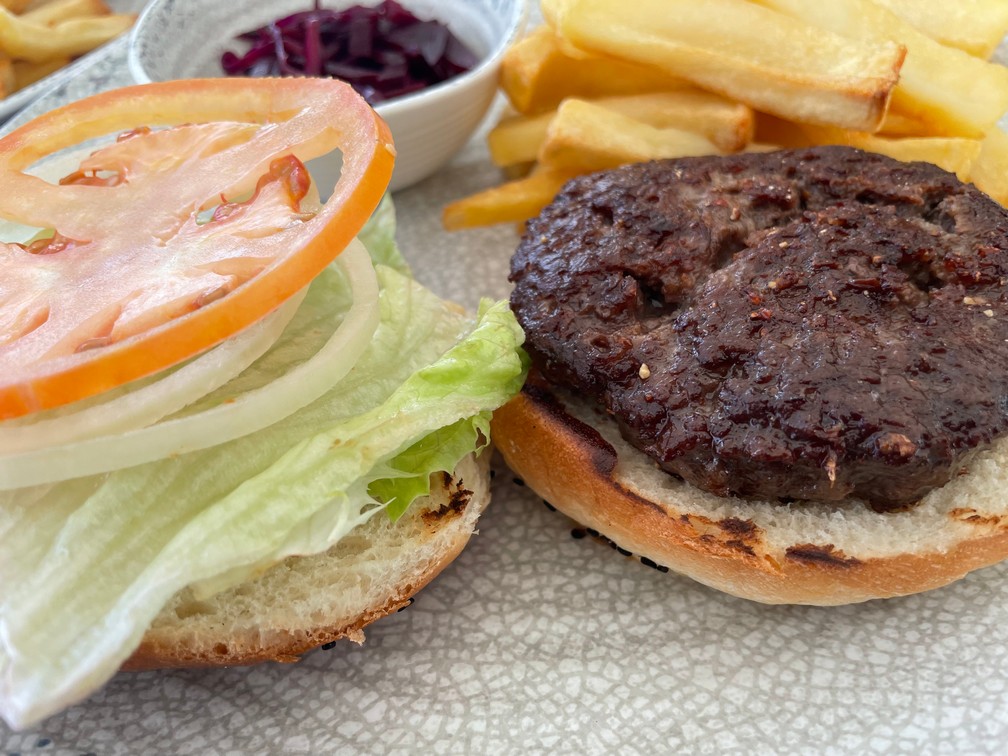 Having decided to give the afternoon repeated tour a miss, it was time for the Hamburger and Hot Dog Test!  Hand-formed perfectly cooked and juicy burgers will always win me over. Couple it with a full slice of tomato, a good bit of crisp lettuce and a toasted bun that is in proportion to the burger and you have a winner. Add crisp and hot steak fries and it results in an A+!

We need to discuss the hotdog. Oh, the hotdog itself was properly cooked, had good snap and was flavorful without being overly salty.  The toasted bun was a bit larger than the dog (and it should be the other way around).  My real issue…and to me it is HUGE: Windstar puts ketchup and mustard on its hotdogs. As Clint Eastwood said, “Nobody. I mean nobody puts ketchup on a hotdog!”  I am holding back my emotions here and trying to accept that some do like the “K thing”: B+.

After catching up on some emails it was time to enjoy “my” hot tub on the bow. I walked out and, as I had hoped, nobody was there…and then a couple did arrive but left the hot tub to me.  Within 5 minutes of my arrival a bar waiter arrived and my cocktail was on its way. Perfect! 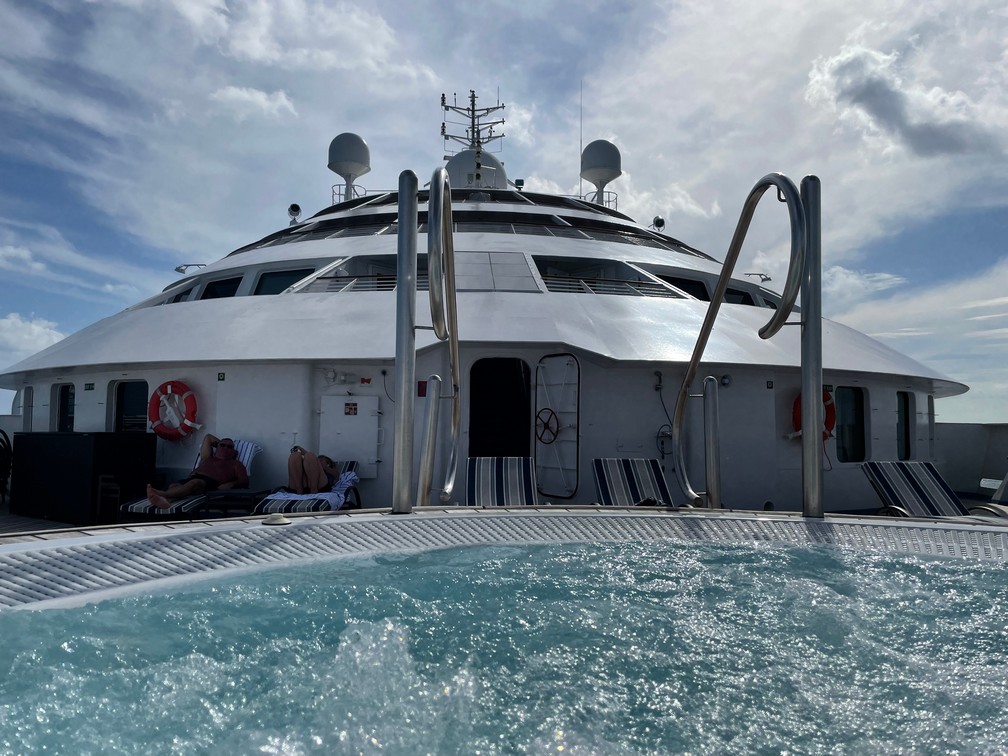 After a bit over an hour, it was definitely time to head back to my suite.  I did send out some laundry today (with the All-In Package it is included) and was pleased on my arrival to find it was already back in my room.  Nice touch!

Dinner tonight will be at Candles.  Eventually I will figure out what tomorrow brings.

I guess I am officially on Island Time!