What is happening at Seabourn?

What can you look forward to?

Seabourn has been pretty quiet of late compared to some of the other luxury cruise lines, but there not only has been a lot going on, there is a buzz of constant refinement of its product.

You are never going to hear Seabourn make headline grabbing, but very silly, announcements ala Regent Seven Seas Cruises that it has “the most luxurious cruise ship ever built” or it “will establish a benchmark for style and service”…or that it will have the highest guest to space ratio (which simply is not true; no matter how Regent wants to make that calculation!)  I do have to ask a question, “If Regent’s new ship is where it will establish its benchmark for service and style, what does that have to say about its current product quality?”  I think it says volumes; but I digress!

Seabourn doesn’t market hyperbole.  It’s just not its style either in its offices or on its ships.  The reasons are known as “class” and “understated elegance“.  Seabourn lets its product speak for itself.

In this article you will read about Seabourn’s: 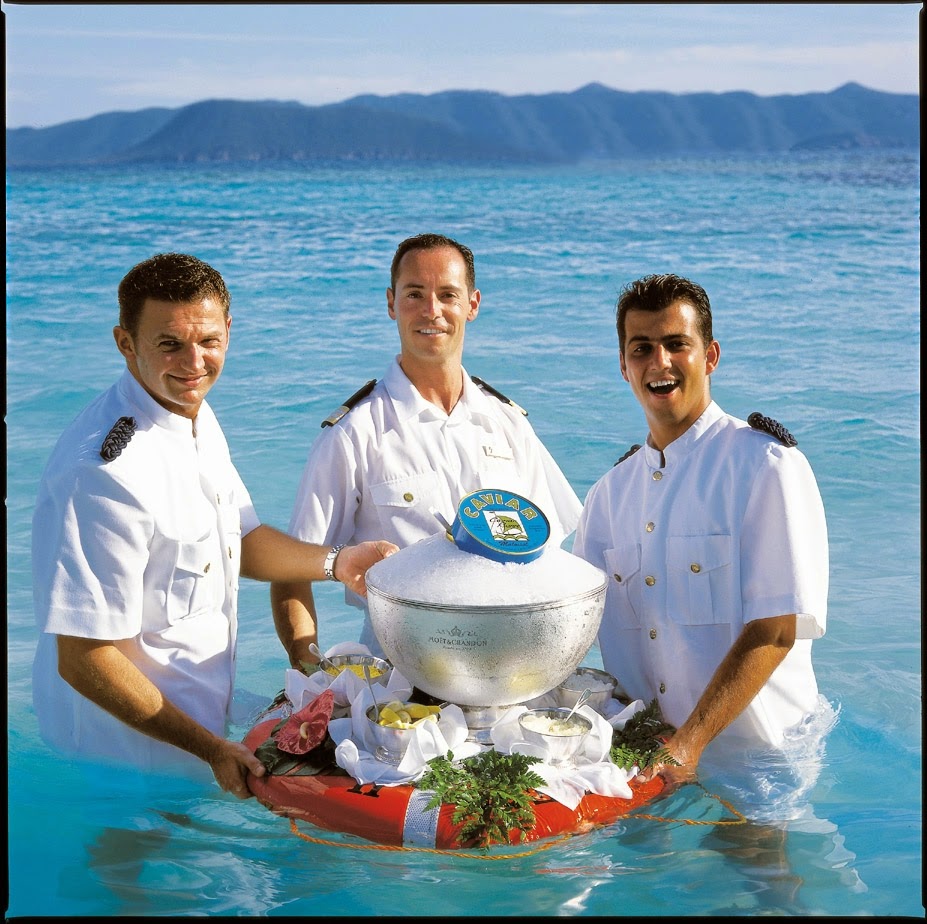 I asked Seabourn’s President, Rick Meadows, and Senior Vice President, John Delaney, if I could spend a day with them and find out what’s happening and what to expect.  Rick and John  agreed and were the most gracious of hosts.  What fascinated me the most was that, aside from the new ship (to be delivered in 2016), there was no real focus on making big changes, but rather on what sort of refinements are being considered.  OK, the new ship is a big change, but the cruise industry doesn’t wait two years for things to happen.
Menus, Cuisine and Wines

I arrived in Seattle in time for a dinner with John Delaney and the head of Seabourn’s charter and incentives program.  Seabourn arranged for me to meet them at Matt’s In The Market, a Seattle institution, where  you have to make reservations a month in advance.  It is located at the Pike Street Market and specializes in fantastic seafood.  This was a purely social evening as the next day a number of Seabourn executives would be converging on the Seabourn Conference Room  as I went through my list of concerns, observations, and questions.

What I wasn’t prepared for was waking in the morning to receive an email at 7:00 AM that Seabourn had just the day before signed the firm contract for its new 604 guest Odyssey-class (plus one deck) ship.  Why wasn’t I told during dinner just hours earlier?   The reason, it seems, is that on the corporate level Seabourn is sort of the antithesis of what the guest experience is on its ships:  Seabourn keeps everything…and I mean everything…very close to the vest.

You need a security card to get into Seabourn’s offices and, even then, leaving items in the Board Room results in the door being locked.  (Seabourn obviously shares some space with Holland America and even getting into the Employee lunchroom requires a security card.)  Now this might seem like the “control freak” approach is necessarily a bad thing, and as I don’t run the company I can’t comment on if it the right way to do business, but it does provide an air of Seabourn being a bit fanatical about quality control…and that is a good thing.

A good bit of time was spent discussing cuisine, menus and complimentary wines…something near and dear to most of your hearts.  The focus:
1.       How to better promote that Seabourn’s menu offerings – which have been and are expanding – while some guests perceive they are more limited;
2.       How the dishes are more complex with layers of flavors and more sophisticated spices than ever before;
3.       How Seabourn is spending more money on higher quality beef, chicken and prawns than ever before; and,
4.       How Seabourn has 26 wines included in its complimentary pour wine list, etc.  (Did you know that Rick Meadows is actually sort of foodie and it is really important to him that Seabourn meets his, personal, expectations.)
I suggested comparing some similar dishes from five or fifteen years ago with today (photographically and by recipe). I don’t know if this will happen, but I am confident that many of the “It was better ‘back in the day'” comments would disappear.

Here’s something I didn’t know…and I bet you didn’t either:  Seabourn has a Test Kitchen!  Yes, Seabourn does try its proposed new dishes at its headquarters (sharing the facility with Holland America, of course.)  I was fortunate to not only see the Test Kitchen, but to have lunch with Rick Meadows, It was a very nice lunch with Rick Meadows, John Delaney, Chris Prelog, and Stijn Creupelandt 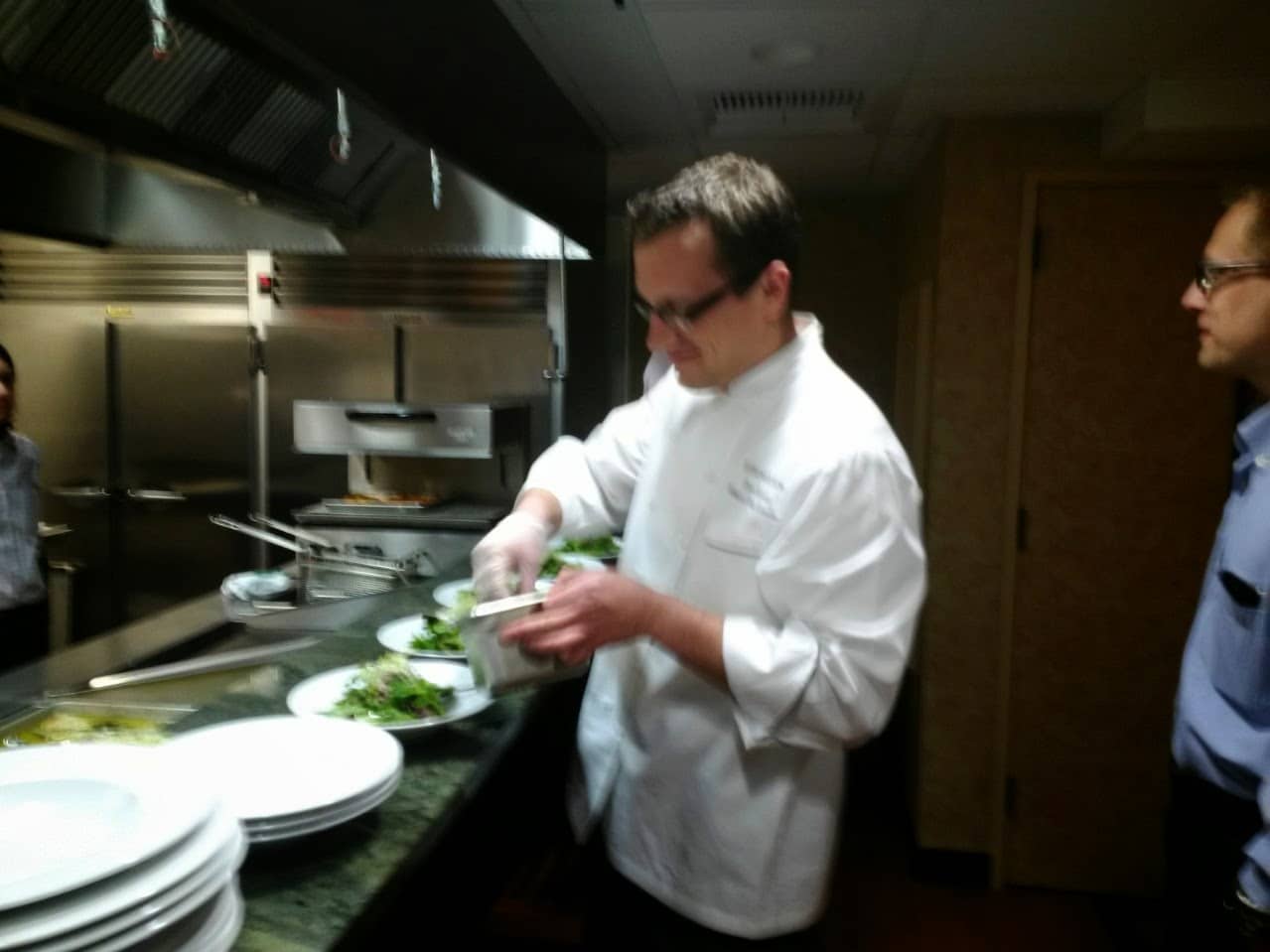 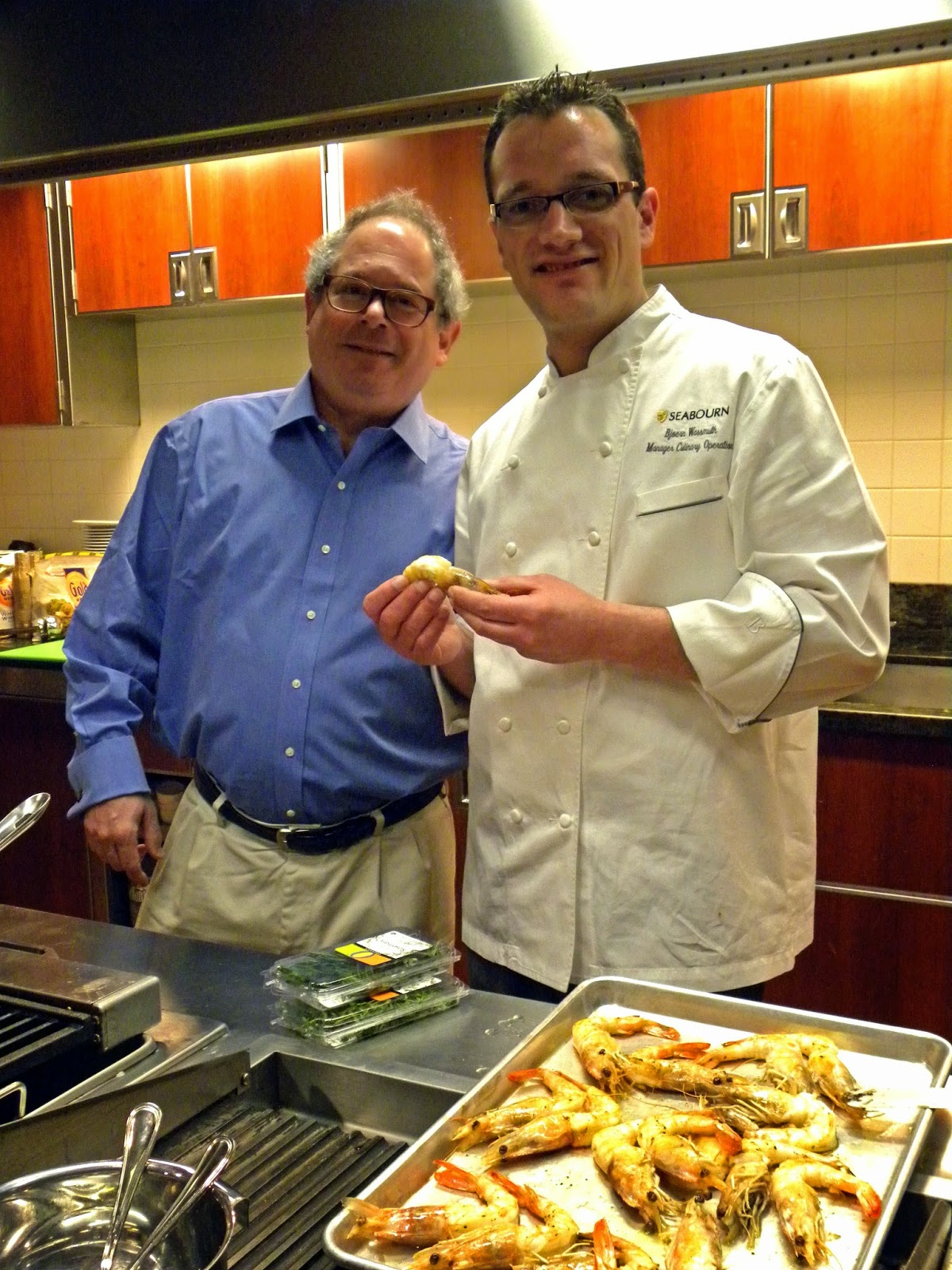 And I don’t mind saying lunch was superb!
You Love Your Stewardess…and Other Tidbits
I am also pleased to debunk the persistent rumor (and, folks, it is a rumor) that the Stewardesses on the Seabourn ships are going to be changed out to Filipino staff.  Seabourn is committed to providing the same, personal, experience with European, South African and South American stewardesses for the foreseeable future.  This is a Seabourn signature and so it shall remain.
There were many other things (little and not so little) that we discussed from

And while Seabourn may be very tight-lipped about what it is doing and what it has planned, one thing is for certain:  Seabourn listens!  The amount of notes taken and subsequent follow-ups make it clear that Seabourn is committed to improving every aspect of your cruise experience.

Now that I have your attention, let’s move on to the “big stuff”!
Seabourn’s New Ship – Some Incredible Experiences Are Coming
Just as I had figured, Seabourn – while being extremely guarded about specifics – confirmed to me that the ship will essentially be an iteration of the Seabourn Odyssey class ships, but with an additional deck, so Deck 8 will be accommodations and Deck 9 will have the Colonnade and Pool. Deck 4 (which previously housed the Oceanview Suites – which will not exist on the new ship) will be used for more public spaces.  One point Rick and John emphasized is that while the passenger count will increase from 450 to 604, the staff will essentially increase by the same proportion and the public spaces – which are rarely, if ever, crowded – are also expanding.

Seabourn has brought in Adam D. Tihany, an icon in the hospitality design industry to rethink the entire vessel from the dining venues to the spa, lounges, casino, outdoor spaces and even the very popular and successful Seabourn Square.  Tihany has created remarkable spaces for some of the top restaurateurs (including the likes of Thomas Keller, Daniel Boulud, Jean Georges Vongerichten, Charlie Palmer, Heston Blumenthal, Paul Bocuse and Wolfgang Puck) and hoteliers (such as South Africa’s One & Only Cape Town resort, Mandarin Oriental Las Vegas, King David Hotel in Jerusalem, The Oberoi Hotel in New Delhi, The Beverly Hills Hotel, The Breakers in Palm Beach and Hotel Cipriani in Venice).

Mr. Tihany said, “What I strive to do is to find an aesthetic that expresses the personality of the brand…Thus, my goal is to design a beautiful, and very uniquely Seabourn ship, one that will reflect Seabourn’s aura of casual elegance and thoughtful attention to detail, that will make their guests feel welcome and invite them to experience Seabourn’s special brand of ultra-luxury.”

Here is a wonderful interview of Tihany from CBS News’ Charlie Rose…at about 3:30 of the interview there is a little sneak peak of the new Seabourn ship!:

Having been fortunate enough to experience some of Tihany’s projects first hand, I can comfortably say that Regent can market its hype all it wants, but Seabourn, quietly, is assuring its clients they will have the ultimate luxury “experience“.

The philosophy of Tihany’s charge from Seabourn is to not only create new and improved spaces, but to do so in a way that the “older” (they are still “new”) Seabourn Odyssey, Seabourn Sojourn and Seabourn Quest can be retrofitted in a way that provides an overall improvement in the Seabourn product and a consistency between all of the ships.

One thing that needs a change and which Seabourn is already working on is the lounge furniture.  While it is quite comfortable, the ocean air has taken its toll on the finishes.  New furnishings are already being installed throughout the fleet, but it will be interesting to see if something new will be used on the forthcoming ship.

Seabourn has made huge improvements in the one area I felt was previously its weakest:  Enrichment.  It has done this two ways:  Seabourn Conversations Series and partnership with UNESCO…as well as some special culinary and other focus cruises.

The Seabourn Conversations program is bringing literally dozens of world renowned speakers on topics ranging from world affairs to marine biology, historians to culinary geniuses and more onto a wide range of Seabourn itineraries.  Please click:  Seabourn Conversations to see a list of sailings by subject matter interest and dates.  (This is a dynamic page, so it is updated regularly.)

Just recently Jon Landau, producer of Titanic and Avatar brought one of his Oscars onboard for the guests to hold while he chatted with them and Apple’s co-founder, Steve Wozniak, providing some very insightful and enjoyable discussion.

The UNESCO Partnership, according to John Delaney, Seabourn’s Senior Vice President, has been a two year project and as it continues to roll out it will become more robust and more offerings will be provided.  This is one improvement I am particularly happy to see, as I am always looking for ways to make my time on shore “experiential” rather than just looking at things and ticking them off.  UNESCO stands for the United Nations Educational, Scientific and Cultural Organization.  Many people believe when they hear something is a UNESCO World Heritage Site it must be historical, but alas that is not the case.  It can be of special cultural, physical or scientific importance and includes things as massive as Africa’s Serengeti Plains or Australia’s Great Barrier Reef to as small as a cathedral in Central America.

Seabourn has also announced it has installed PressReader Offline on all of its ships.  It has been testing a version of this for a while.  Essentially you download an app to your iPhone, iPad, Mac or Android device (Seabourn will have a limited number of tablets for those guests who don’t have one) and then you will have complimentary access to over 2,500 newspapers and magazines.  And, the best part is, you do not need an internet connection to accomplish this as you can simply log into the Seabourn wireless network.

So if you want to stay connected via  your hometown paper you will be able to do it.

Seabourn is going to be spending less time in the Caribbean and more time with exotic destinations ranging from Southeast Asia to Australia to South America and the Antarctic in January and February 2016, coupled with two trans-Pacific Ocean cruises to/from Los Angeles, California.

Winter 2015 includes cruises in Asia and Arabia, the Antarctic and the Caribbean, but in March 2016 Seabourn is headed to China and Japan as well as the Pacific Islands with an eventual transition to India and Arabia before returning to the Mediterranean in the late Spring of 2016.

With only three ships and extended itineraries, the the demand is going to be extremely high, so don’t wait to book one of these improved itineraries.

While I still receive comments about how Holland America will ruin Seabourn, the fact is that while the approach today may be much more corporate and almost secretive, the goal remains to keep Seabourn at the top of the luxury cruise market; not by resting on its laurels, but by improving the product and the onboard experience…quietly and with class.

You do want to make sure your travel agent is an expert AND provides you with excellent service and prices, right?