“The Cliff”: Did the Sale of The Seabourn Pride, Spirit and Legend to Windstar Cruises Send Them Over the Edge…Or Give Them a New Life?

On Monday, September 8, 2014, I am boarding the Star Pride for a seven day Black Sea cruise. Windstar Cruises has invited me to see what they’ve done to the Pride and how things have changed. It’s going to be different…but is that bad?

Before I get to the specifics, I want to talk about “The Cliff“.  You’ve all heard the expression, “It’s all downhill from here“, well The Cliff is when something is so good, so spectacular, so incredible that when it goes way it is like suddenly falling off a cliff; like there is nothing that could replace it.

When word of the Seabourn triplets being sold came out to many it was like The Cliff.  The intimate, personal, 208 guest “yachting” experience that was Seabourn would be gone forever.  The number of times I heard, “I guess I will have to find another cruise line when the triplets go” is countless…as are the number of times people want me to forget they said that.

It is, personally, rather ironic that I am about to experience and review the new life of the Pride as she transforms from the Seabourn Pride to Windstar Cruise’s Star Pride.  Why?  Because I, personally, have been facing my own “The Cliff”.

Over the past months I have been going through four (4) of what most would consider fairly traumatic life experiences:  I am going through a divorce after 20+ years of marriage; my son has just headed off to Colorado for his first year in college; I am adjusting to being a single parent to my 15 year old daughter (though I pretty much have been a single parent to both of my children for years); and, I am transitioning out of the practice of law to focus solely on Goldring Travel.  The Cliff?   Nope.

I had another significant change:  Through all of that stuff there have been wonderful new transformations of my life…and a wonderful person to go through the bumps and successes with.  My approach is different. My perspective is different. My ability to enjoy is different.  And, I think, all for the better.  But it is a process.

For me “The Cliff” is what I face if I let go of any of that…or it lets go of me.

However, since gazing over “The Edge” is not my favorite thing (though taking a peek is unavoidable!), I prefer to know the potential for The Cliff is there, but not to focus on it. 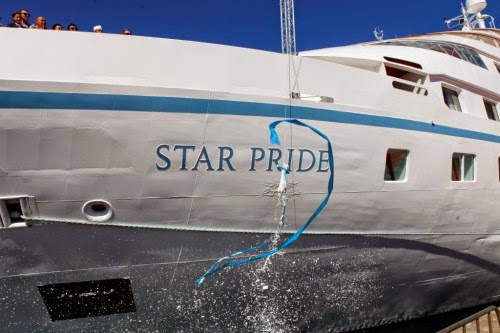 While other ships were getting bigger and fancier the Seabourn mantra became, “It’s not the hardware (the ship), its the software (the people)” and those three ships sailed full on virtually every sailing.  But then the luxury market really needed to provide more in the way of alternative dining venues, more and larger public spaces, faster ships so that more exotic ports could be visited, more modern galleys for more complex menus and the list goes on…while the triplets were potentially and seriously looking at The Cliff.

I mean who would have the vision and the money to transform these circa 1988-1996 small ships with no real balconies?  Would they wind up like the incredibly popular but far too unique Radisson Diamond (I loved that ship!) ferrying Asian gamblers out to sea in smoke-filled casinos and little elegance…or worse? Oh The Cliff was very real.

And then Xanterra Parks and Resorts, the nation’s largest operator of park-based hotels, restaurants and stores, purchased Windstar Cruises and orchestrated the purchase of the Seabourn Pride, Spirit and Legend. (You can read more about it here:  Windstar’s Wind Surf – What Does It Tell Us About theTransformation of the Seabourn Pride into the Star Pride? Leave Your Tuxedo and Bring Your Flip-Flops!
And their transformation began…and so did a change in the perspective for these ships.  The Star Pride and her sisters are no longer focused on the luxury, but premium, market and their “attitude” is not on providing luxury but Windstar’s friendly and warm, service.  This takes a lot of pressure off of the ships AND it allows the Pride to more than competitively complete with the other players in the Premium market.  How so?
The Star Pride is an all-suite ship with marble bathrooms (with double-sink vanities and full bathtubs), large sofas and true in-suite dining capabilities with true refrigerators and a modern entertainment system.  What other premium line offers these amenities?
The Star Pride has an elegant dining room, two possible al fresco dining options and tons of deck space…along with the ability to visit ports that many of the premium cruise lines simply cannot visit plus tenders with true tenders rather than lifeboats (a nice touch).
Windstar has made some changes to the Pride including transforming the Observation Lounge into its Yacht Club thus giving it more purpose than it had in the past, as well as redesign of what was formerly The Club into the Compass Rose Lounge.  I will talk more about these and other changes when I am onboard next week!
And so, faced with The Cliff, it seems that the Star Pride has turned away from it, and its new support is giving it a bit assist.  Do I expect there to be a few bumps and adjustments to come?  Of course.  It is part of the process.  But I am truly looking forward to boarding her since my last cruise on her for the 2012 Goldring Travel Food & Wine Cruise.
The cruise I will be taking is perfect for the Star Pride:  A Black Sea cruise with some smaller, unique, ports…ironically very similar to a 2004 cruise I took on the Radisson Diamond; visiting Istanbul, Amasra and Samsun, Turkey; a day at sea; Odessa, Ukraine (we shall see), Constanta, Romania; and Nessebar, Bulgaria. I will be spending two nights in Istanbul pre-cruise at the Hotel Nena in the heart of the Old City.  I have always stayed outside of the Old City and visited it when I wanted.  Taking a different perspective and a premium (rather than luxury) approach right from the start, should put me right on course to view and live the Star Pride in the proper, and refocused, light.
I have also made sure that I did not have too many conversations with Windstar Cruises prior to my departure because I don’t want any pre-conceived expectations.  I have enough of those as it is.
And, to be sure, what I need to be careful of is saying, “The last time I was onboard…” or “On Seabourn…”
It is time for fresh starts, fresh perspectives and appreciation of what is right in front of me and the Pride…and we both know it is not The Cliff.
Share on facebook
Facebook
Share on twitter
Twitter
Share on linkedin
LinkedIn